After staying with my Warmshowers hosts in Prince George, it was time to leave and cycle to Quesnel in Canada. Continuing my bike tour across Canada.

Richard had suggested that we go to the AA burger bar for breakfast, and so with my gear loaded, I cycled over to meet them. 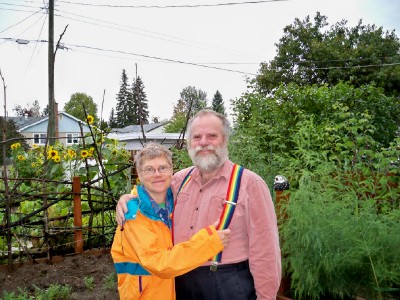 The breakfast was outstanding, but Richard wouldn't let me pay which made me feel a bit awkward and very thankful. He's a really great guy, and I could learn a few lessons from both him and Maggee… in fact, we all could.

As I waved goodbye and  cycled away, it was a strange feeling. They didn't just do this for me, they do it for any cyclist that passes through, and that sort of generosity and kindness is a rare thing. Special people, and I wish them all the best.

The distance between Prince George and Quesnel by road is 121.9 km. So it was a reasonable day's cycling ahead of me.

There were ominous looking clouds as I cycled towards Quesnel where I was due, again, to visit a warmshowers host. I managed to dodge most of them, but one caught me as I was 20 kms short of the town.

And not just a downpour, as some joker in the cosmos decided to throw hail into the mix as well. I went from bone dry to soaking wet in about thirty seconds.

Coming into Quesnel, I found a payphone, and called April and Lee for directions to where they live.

Your drowned rat has arrived!

If a drowned rat turned up at my place, I'd think twice about letting him in, but they were great. I soon had a cup of tea, and we swapped stories whilst I warmed up for a bit.

Showered, cleaned and dressed, they offered me a beer (can't really say no to that!!) and we had a great meal – just what I needed!

Another great Warmshowers experience in Canada

Again, April and Lee were fantastic people who were willing to share their home and time with a stranger just passing through. April had done some time travelling through Australia and New Zealand, and Lee was one of the organisers of the Quesnel cycling club.

They gave me one of their club cycling shirts, which I intend to wear as soon as I am in short sleeve weather again. I think the cycling shirt may actually class as the first donation I received from a sponsor!!

The universe acts in great ways, as only days before, they had been sorting out old MP3 players, and on hearing that mine had undergone a total existence failure, they offered me one as a replacement. Outstanding.

You can read more about this tour using the links below:

– Dave Briggs
Dave wrote this travel guide about traveling from Prince George to Quesnel in Canada when cycling from Alaska to Argentina.