A few days ago, a Stanforth Kibo bicycle arrived for me to test out. It's the first bike that's ever been loaned to me to test, proving you're never too old to experience something for the first time!

It came about after Simon, the owner of Stanforth, had gotten in touch via Twitter in June. He asked if I would like to test one out, and naturally I jumped at the task. I am all for playing with new toys! 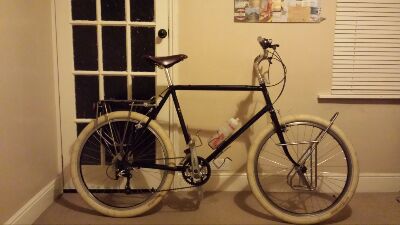 I've got the Stanforth Kibo Bicycle for 3 or 4 weeks, and during that time, I hope to test it out under a variety of circumstances. It will go to work and back with me on my daily commute, and get used at the weekends for longer rides on sealed and unsealed surfaces.

I am even hoping to get a 2 or 3 day bicycle tour in somewhere along the way. This should give me a pretty good idea of how the bike copes, and how I rate it.

Before I go any further I think it's important to point out that I am not being compensated for testing the Stanforth Kibo bicycle.

Obviously, it's been loaned to me and I am very grateful for that, but you can rest assured that any views I have about the bike will be uninfluenced and entirely my own.

I think that's what you have all come to expect from me by now, and I would never change that! It's also worth me mentioning that I will be testing the Kibo out predominantly as a touring bicycle.

This is important to note, because the bike is aimed at two markets. In fact, the slogan for the bike is “Where urban meets Expedition”. This is a bike which is designed to be ridden as much around town as through the back trails of little heard of foreign countries.

I will write about my thoughts on both markets, but my expertise, such as it is, lays in bicycle touring.

One more thing. (Was it Columbo that used to say that?). As I am trying to develop my YouTube channel, I decided that it was time for another video. Apologies in advance, but my face is in this one! Below, is a short video on the unboxing and first impressions of the Stanforth Kibo Bicycle. To find out more about the exact specs of the bike, visit www.stanforthbikes.co.uk

And so there we have it. Over the next few weeks, I will test out the bike and see what I think to it. I am planning on doing two more videos.

In the mean time, if you see someone riding around on a Stanforth Kibo bicycle over the next few weeks in the Midlands, give me a wave!