If you're in the trip planning stages of putting together a bike tour through Europe, this guide to what I spent might be useful. 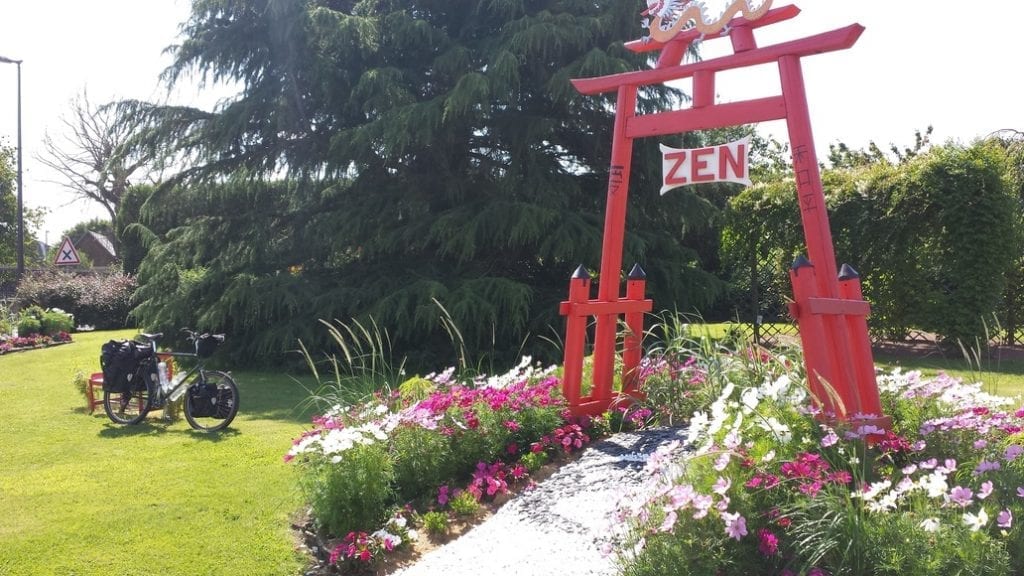 During my recent bicycle tour in Europe, I have been keeping track of my travel budget. This is a brief look at my expenditure for July, along with a general summary.

At the end of the article, I total up how much the entire bicycle tour from Greece to England cost.

I began my bicycle trip in Europe from Athens, Greece in May 2016. Over the next two and a half months, I cycled through 11 countries on the way to my final destination of Northampton, England.

During my bike trip, I followed Eurovelo routes, bike paths, and quiet roads. My accommodation varied from wild camping to cheap hotels.

When I set off, I didn't really have a travel budget in mind. My plan was to be neither too extravagant, nor to cheap, in order to show that bicycle touring is an affordable and easy way to travel.

The image of the ‘hardcore' bicycle tourist cycling around the world on $10 a day is often admired, but the reality is not everyone wants to do this.

I've done this in the past, for when cycling England to South Africa and Alaska to Argentina, but as this was a shorter trip compared to those bike tours. Basically, I didn't need to watch every penny like I did in the past!

By taking a new approach for this cycling trip from Greece to England, I wanted to show a certain degree of comfort doesn't totally blow your budget. 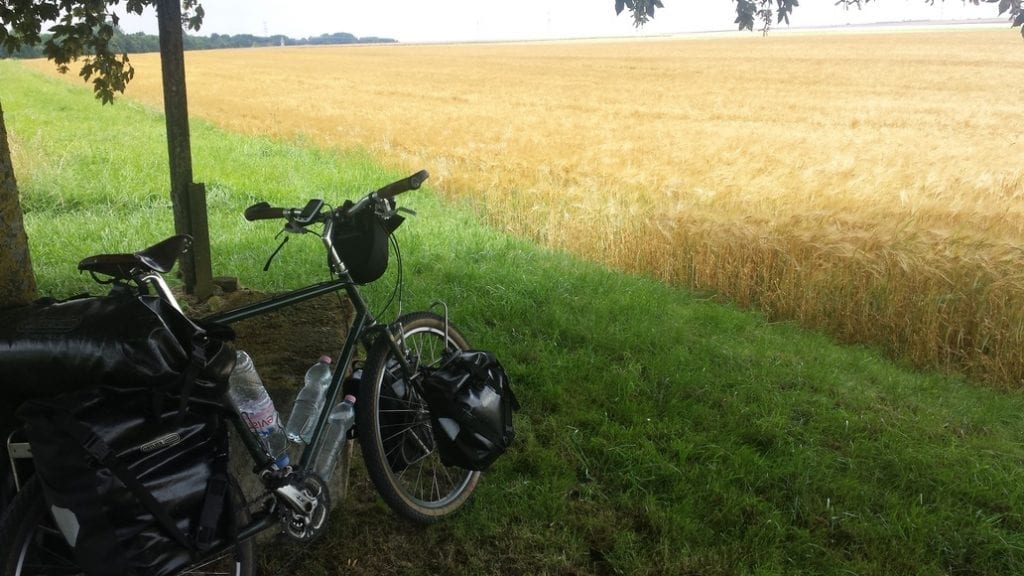 I have already listed my travel budget for the previous months of the tour. You can find them here – May costs, and June costs. After entering northern Europe, I fully expected my average daily spend to rise higher than these months.

Certainly, staying in hotels or guesthouses in Austria and Germany was a lot more expensive, and so I avoided this when possible. Camping wasn't particularly cheap either, with some campsites costing 15 euros a night.

Annoyingly, it was also harder to re-charge my travel gadgets at these campsites as well. 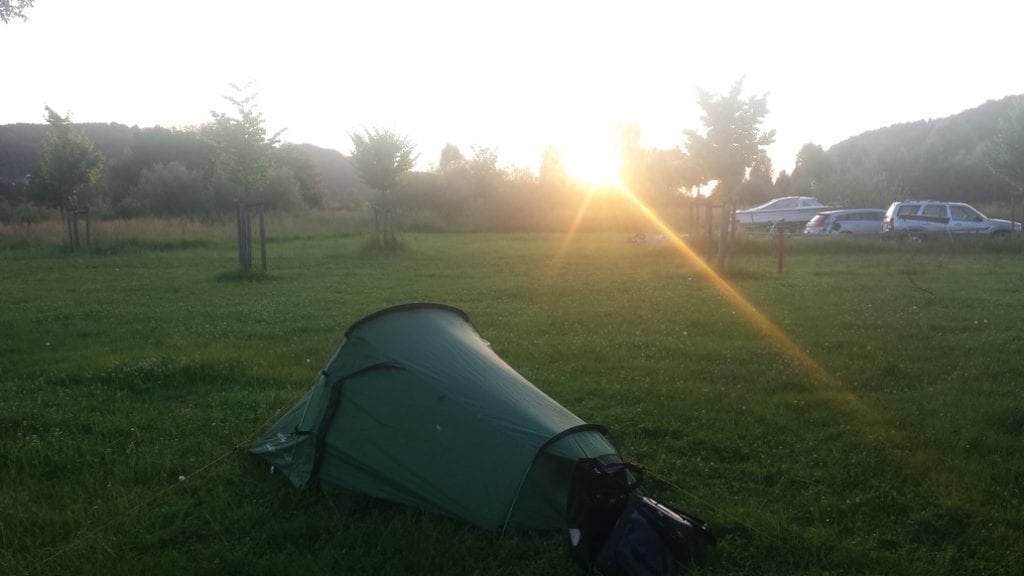 France was great though. It had super-cheap camping, and on a couple of occasions I stayed at campsites for 5 euros a night. There were also plenty of places to charge my gear up as well! I've included a video which showcases one of these campsites below.

(If you don't know already, I kept daily vlogs during the cycle trip, which you can check out on my youtube channel).

My travel budget expenses for my ride through Europe in July includes the regular costs such as food and accommodation.

It also includes the cost of the ferry journey from France to England which was a quite reasonable £23 including the bike.

As usual, I have totalled the costs up in Euros, as this was the most common currency used throughout the trip.

As you can see, my travel budget through one of the more expensive parts of Europe wasn't too bad overall. For people really looking to save money on a bicycle tour, the obvious thing to look at is accommodation.

I could have wild-camped and used Warmshowers to cut costs for example. I could also have chosen a route which based itself around cheaper accommodation, rather than one which was designed to get me across Europe quite quickly.

What did the entire 75 days of bicycle touring in Europe cost me then?

The Cost To Cycle Through Europe

So what do you think? Is this an expensive travel budget for a 75 day cycling trip across Europe, or do you think it's pretty reasonable? How do you think that compares with other forms of travel, such as backpacking or travel by train? As always, I would love to hear your thoughts, so please leave a comment below.

One more final thing. Many people ask me what I ‘do for a living'. (I think it's kind of an old-fashioned question, as work does not define me).

The answer is, a mix of freelance writing, internet marketing, linguistic checking, and social media management. All of these things can be carried out on an ‘independent location' basis. You could also say I am living a laptop lifestyle!

Due to my schedule, it was not easy keeping up with paid work during my cycling trip. Despite this though, the difference between my total wealth (for want of a better phrase) before and after the trip, is just 800 Euros.

Looked at from this point of view, the trip cost me 800 Euros in real terms, which averages out to 10.66 euros per day. 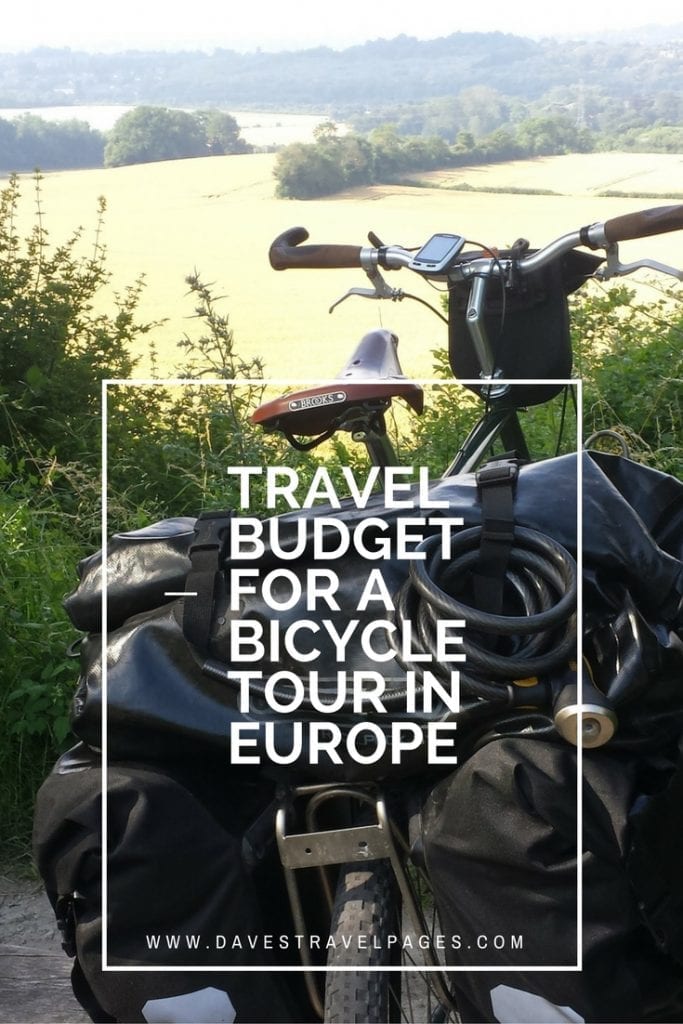 After some thought, I believe that if I spent 4 days cycling, and 4 days in one place working, I could probably earn more than I spent. Repeating this would fund the trip, and probably add to my savings as well.

This has definitely motivated me to increase my online income. Over the coming months, I may write a little more about how to create passive income online, and how to fund long-term travel without killing your savings.

I will either do it here, or on a separate blog. So, if you are interested in that, you might want to sign up for the newsletter for regular updates!

Also read: How to save money for a long-term trip