I now no longer consider the Ryanair app to be safe to use. After booking flights through the app for April of 2020, my flight was cancelled. When applying for a refund, Ryanair said that I had booked tickets through a screen-scraping site and they could not refund my tickets.

Therefore, I can not recommend anyone to use this app, as you may find that you will not receive any money back through cancellations.

I first used the Ryanair app back in 2014 during a trip to Athens. Whilst on the way out to Athens I had printed a paper boarding pass, I decided to give using the Ryanair app a go on the return journey.

The reason for this, was due to the fact that Ryanair had introduced a new ticket printing procedure that didn't work out for me.

At the time, Ryanair's new procedure was to offer allocated seating only. The drawback was that you could only print off the boarding passes 7 days or less if you want to do it for free.

As I had 9 nights in Athens, I was not able to print off my return flight boarding pass. On top of that, the hotel  I was staying in didn't have a printer that worked.

So, the logical choice was to try using the Ryanair app. Whilst that procedure has now changed (probably about 50 times!), it was the push that sent me in the direction of using the app for the first time. 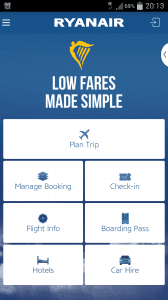 Now, its probably worth mentioning at this point that I have a distinct love/hate relationship with Ryanair. And I guess I'm not the only one that finds them a little like Marmite!

I love the cheap flights, but hate the way they try to milk money back from us. (Read my previous post on packing for Tbex and a quick Ryanair rant).

Using the Ryanair app though seemed to be an ideal solution. The only question was, would it work?

The Ryanair app is available for Android and Apple devices, and can be found in the Apple App Store, and in Google Play.

As I have an Android phone, any screenshots you see here have been taken from that. I am not too sure how much the platforms differ. Please note that these photos are 2014, but not a lot has changed. 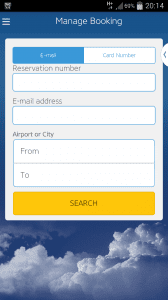 Is the Ryanair app easy to use?

My first concern, was that the Ryanair Mobile App was going to be as dreadful as their website. Once it was downloaded though, I was pleasantly surprised to see a simple, but well laid out user interface.

This is at the total opposite end of the spectrum to their website, which seems to develop extra layers of unneeded complexity as the years go by.

There were a number of simple options to follow in order to manage my booking, all of which flowed smoothly with none of the hassle of the website.

The pages were cleanly laid out,  and everything was pretty instant. Although I haven't used it for this yet, it also looks possible to book flights from the Ryanair app.

When I was checked in, the boarding pass was stored onto my phone. Once this had happened, accessing it did not require an internet connection which was a relief!

That's pretty much all there is to the app – Its well designed, straight forwards, and does make life easier. Of course using the Ryanair App was the easy part. The next step was to see how the airport reacted to it!

Using the Ryanair App in the Airport

There are normally several points in an airport where you need to show a boarding pass. These include getting through to the departures area, the queue to leave the gate for the plane, and sometimes, on the plane itself again.

With this in mind, I made sure that I had plenty of battery life in the phone, as without it, I basically wouldn't have a ticket!

I was in the airport quite early in the morning, and there were no queues which was a bit of a result. Getting the phone ready, I approached the passport control area and braced myself for…. Nothing.

They just waved me through. They didn't ask at the baggage scanning either.

That left the gate area as the last place that I would be asked. In the queue, I was noticeably the only one who didn't have a ticket and was using the Ryanair app. This was a touch concerning! (Note – Flash forward to 2019, and almost no one used a paper ticket!).

When it was my turn, I showed them the phone half expecting them to say that it wasn't accepted. They took a look at it, wandered off, and then got a ticket from behind their counter with my name and seat number.

It wasn't exactly what I was expecting, and kind of made the whole paperless thing pointless, but whatever. Using the Ryanair app worked for me, and I will use it again in the future!

2019 Update on using the Ryanair app

A lot changed in the four years since I first used the Ryanair app. Now, it is by far the norm for people to use the app, and very few people print out their paper tickets.

Also, it's a very rare occasion that you will touch a boarding pass nowadays. You just scan the bar-code from the boarding pass held in the app, and that's all there is to it.

How I use the app

For the most part, I find it easier to book my flight on a laptop, as if I am flexible with my dates of travel, it's easier to find where the cheaper flights are.

After that though, it's the app all the way. I use it to check in and for my boarding pass. If you've not tried it because you are unsure, I'd encourage you to give it a go.

It's a lot easier than trying to find somewhere to print a paper ticket when you are on vacation!