Most people tend to agree that the best time to visit Athens is during the spring and autumn months. That doesn't mean that you can't visit at other times though. There's always something to see and do in Athens!

In this article, I'll break down the reasons why Spring and Fall are the better times of year to visit Athens, along with what to expect no matter what time of year you spend in the Greek capital.

I should also mention that there are no particular months to avoid visiting Athens, although personally I would avoid traveling to Greece in August if you have other options.

A local's insights into visiting Athens in all months

Having lived in Athens for 7 years now, I have seen how the city has certain rhythms when it comes to tourists visiting. The summer months are by far the busiest, and the winter months much quieter.

That doesn't necessarily make the summer the best time to visit Athens though. It can be insanely hot, especially in August in Athens!

That said, because many Athenians leave for the islands in August, so it can be a more peaceful month to visit the city. The metros have far fewer people on them, and driving in Athens is a lot easier in August.

Decisions, decisions. There are a lot of factors involved in choosing when to visit Athens!

Here is when I consider the best time of year to visit Athens: 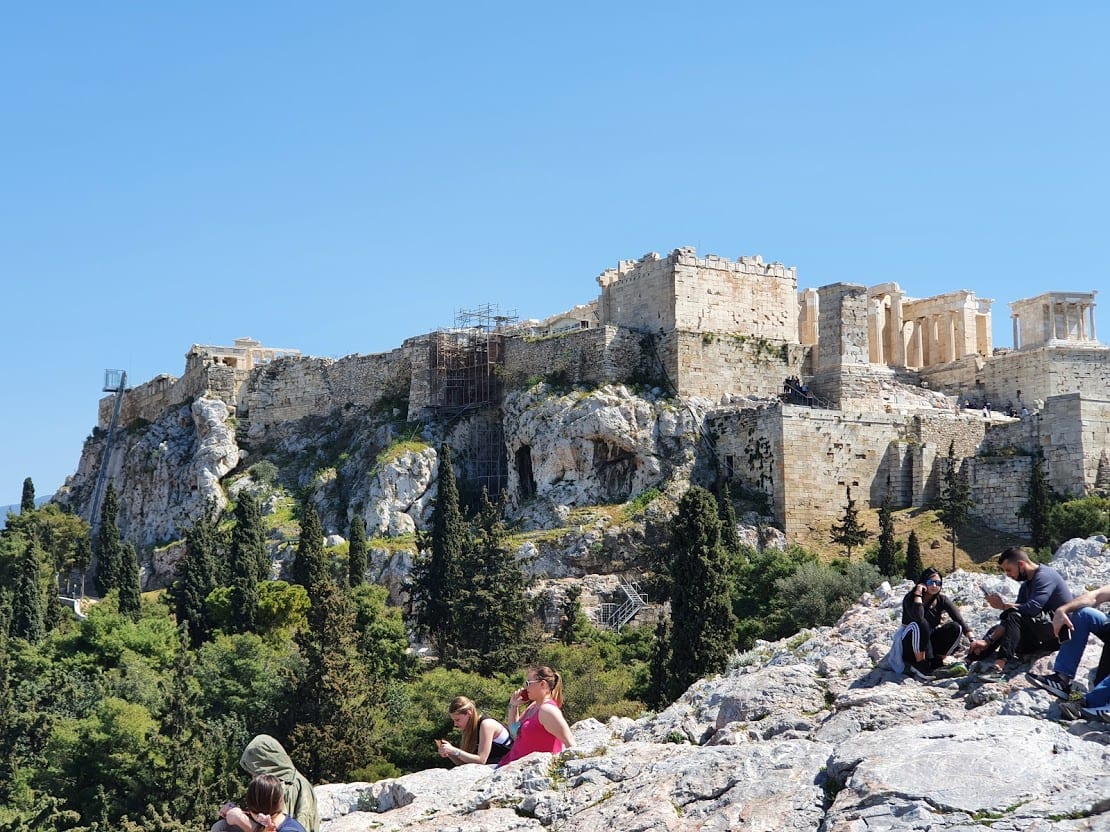 When To Visit Athens

Let me break this down for you, giving the pros and cons behind visiting Athens in each month.

To be honest, this is not the most interesting article in the world, but it does have the information you need!

If you are interested in other destinations outside of Athens, this article on the best time to visit Greece will help. You can also get hold of my free travel guides below.

Athens doesn't really go full in to New Year celebration mode on a scale seen in London, but there is a certain majesty in seeing the firework display near the Acropolis. For the rest of the month, you can expect a quieter city with mixed unpredictable weather.

Obviously, the weather in Athens in January is not going to be optimal! Expect average temperatures to have highs of 13° and lows of 7°. There will also be 4 or 5 rainy days in January in Athens to contend with.

January is the best time to visit Athens for accommodation in terms of value for money. Any of the good hotels near the Acropolis will be cheaper at this time of year compared to later.

This is a close contender for the best time to visit Athens. When my brother visited for 2 days in Athens in February, he had amazing weather.

It's not guaranteed though, which may rule it out for some. The day I moved to Athens in February 2 years ago, it snowed!

If I was to recommend one month for budget travellers to visit Athens, it would be February. Prices are still low, there are fewer tourists, and flights are cheap.

The weather is starting to become more stable in March, making it one of the best times of year to visit Athens. The days are becoming longer too, meaning that there is more daylight to enjoy the city.

Note that Independence day in Greece is March 25th and is a national holiday. If you're in Athens in March on this day, make time to see the big parades!

If you are planning a city break in Athens, I would suggest that mid-March onward is ideal. 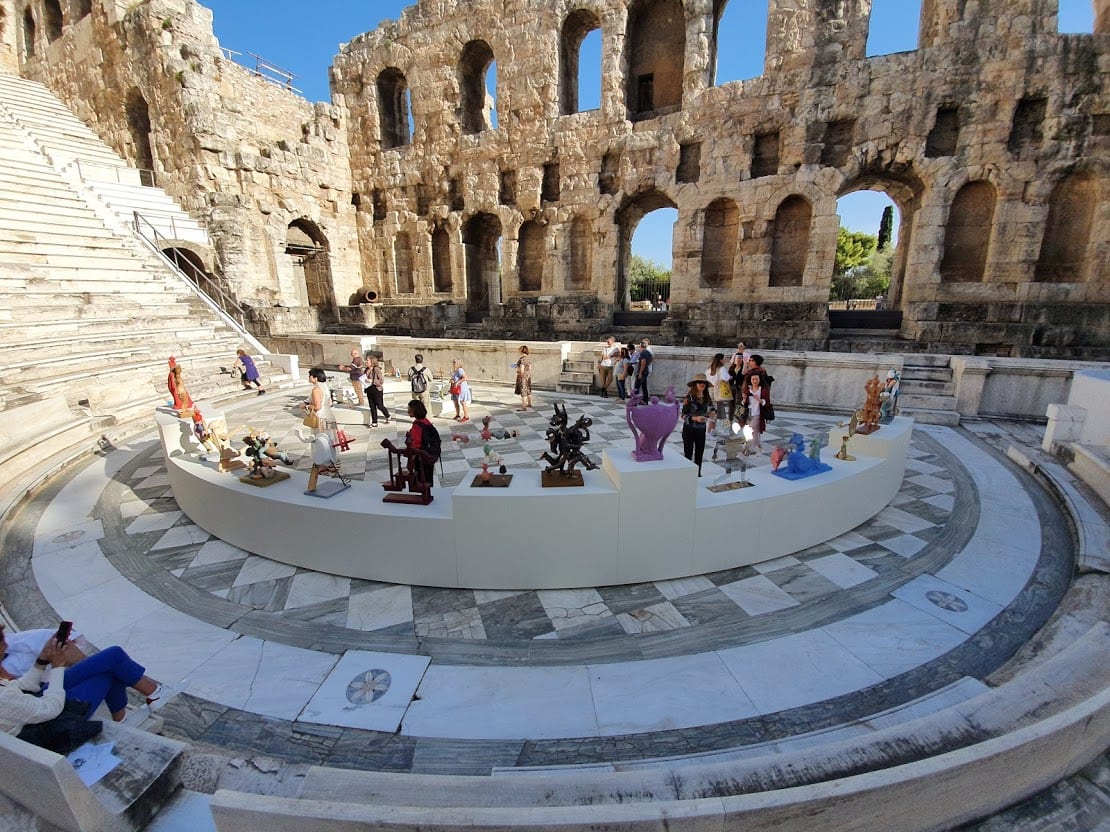 April would be a perfect month to visit Athens, apart from one thing. Easter.

Easter is a big thing in Greece, and people often take a week off to spend time with families. As such, airfares may be higher, and businesses may be closed. You might also find that some archaeological sites would be closed.

On the positive side, you would get to experience a Greek Easter! Take a look here for dates and what to expect – Greek Easter.

My advice here, would be to find out when the Greek Orthodox Easter is for the year you plan to visit Athens, and try to avoid it if you can. (Unless you specifically want to travel to Greece just for that). The rest of the month is fine though.

Temperature wise, tourists are going to most likely be able to wander around in shorts and T-shirts during the day time, but need to wear a light jacket in the evening.

One event you might be interested in checking out in Athens in April, is the Athens International Film and Video Festival. More details here – Athens Film Fest

Many people return to their family villages during Easter, where cooking lamb is a big thing! This photo was taken in Arachova. Instead of visiting Athens in Easter, why not consider a smaller town or village instead?

In terms of weather, May is the best time to visit Athens. Whilst there may still be the occasional chilly (15 degrees) or rainy day, you are most likely to enjoy comfortably warm weather.

It is at this time that the cruise ships also start to arrive in Athens, bumping up the number of visitors considerably.

Note that International Workers Day is on May 1st, and there is always a massive workers strike on this day. Don't plan any ferry trips on this day if you can help it!

If you're heading to the Athenian Riviera keep in mind that you will have warm days in May in Athens, but the sea temperatures are still quite chilly making only a short sea swim possible, especially at the start of the month.

The story for June is pretty much the same as May, just with temperatures getting higher and tourist numbers increasing more. It is highly unlikely you will experience rain or chilly weather at this time of year in Athens, even in early June. (Don't blame me if you do though)!

July is starting to be peak season for Athens and Greece in general. You can expect tourist numbers to be a lot higher at this time of year. Prices for flights and accommodation will also start reaching their peak.

Temperatures are hot in July in Athens, and the chance of rain is very low indeed

Reserving accommodation in Athens ahead of time is strongly recommended. I don't really consider this to be the best time to visit Athens due to the heat in the city. 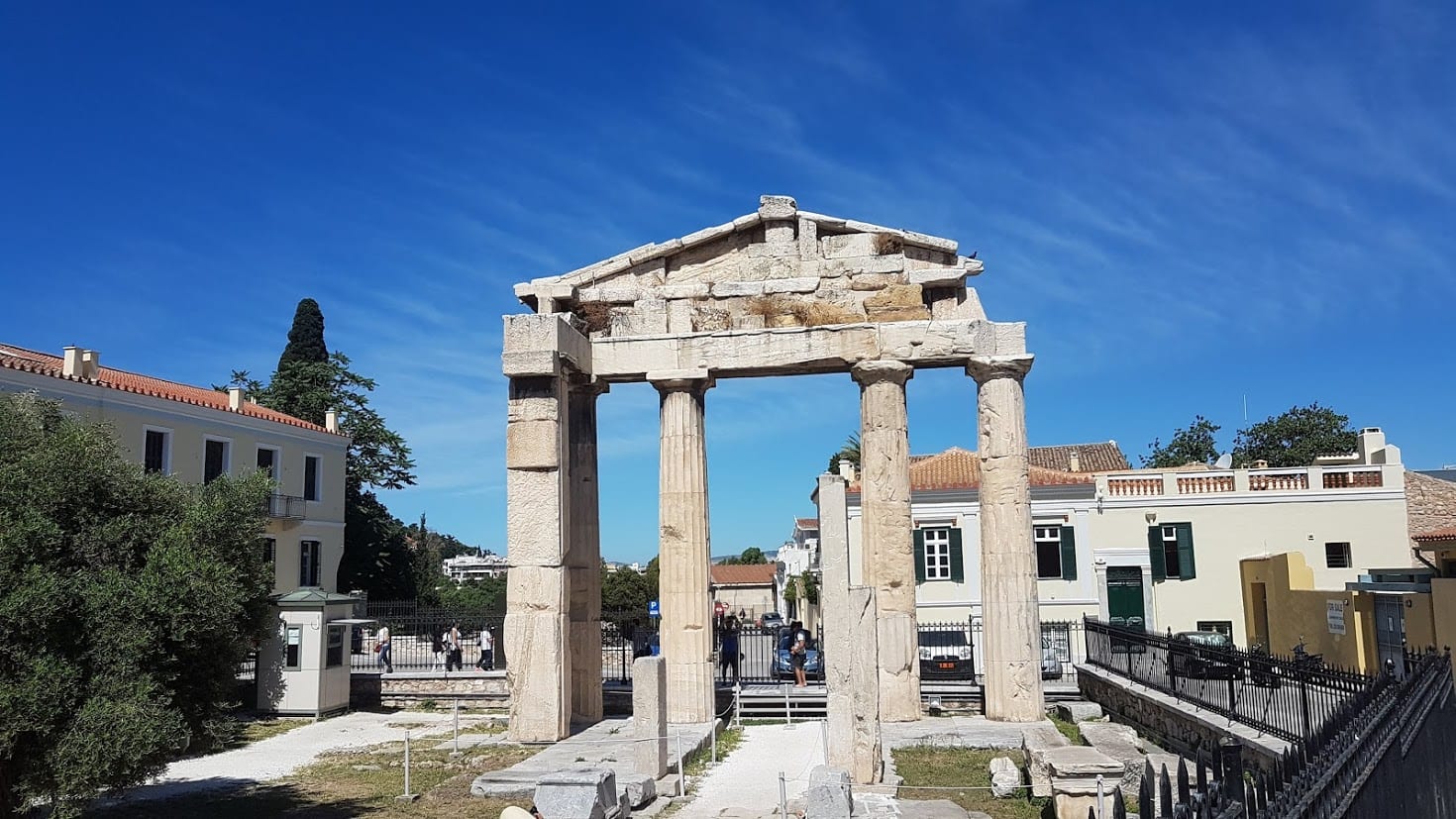 As a resident, I think August is a great month to spend in Athens. Whilst the amount of tourists remains at a reasonably high, most Athenians use this month to take a two week vacation.

It feels like the city virtually empties, and rumour has it, you can even find parking spots easily. Crazy, I know!

August is the peak of the high season in Athens, so hotel prices are likely to be higher, and temperatures in the high 30s, sometimes reaching into the 40s.

The chances of precipitation falling are not very high, although flash thunderstorms may occur towards the end of August in Athens as the weather tries to break. 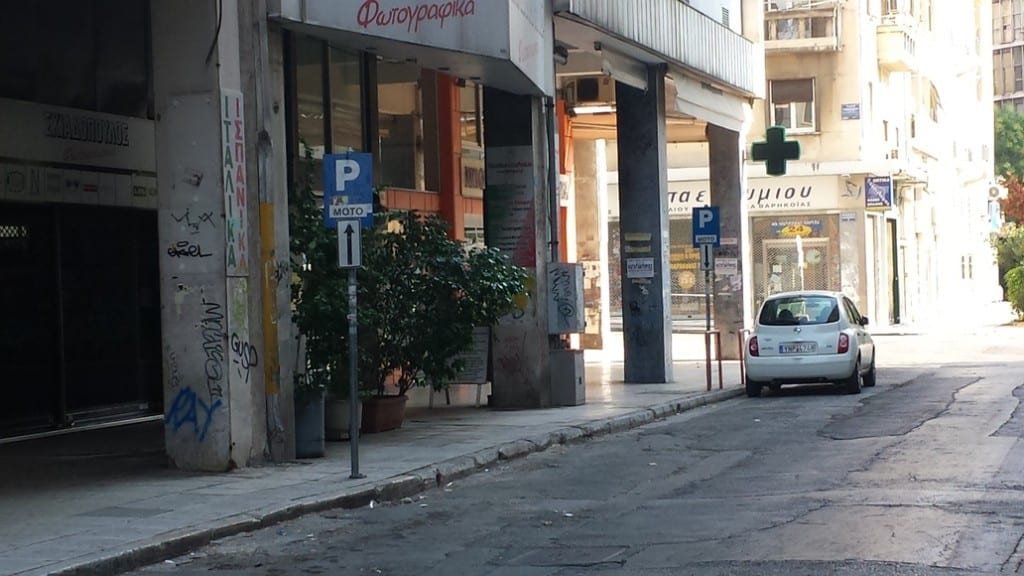 This is my second favourite month in Athens. The temperatures are starting to dip down, and the peak amount of tourists is behind us.

Mostly though, there is a great creative vibe in Athens during September. Everyone seems to put into action the plans they made over the summer.

There are shows, events, festivals and exhibitions all over the place. A great month for culture vultures to visit Athens!

Late September in particular is the shoulder season time in Athens, so it's possible to find better flight and hotel deals to Athens at this time of year. 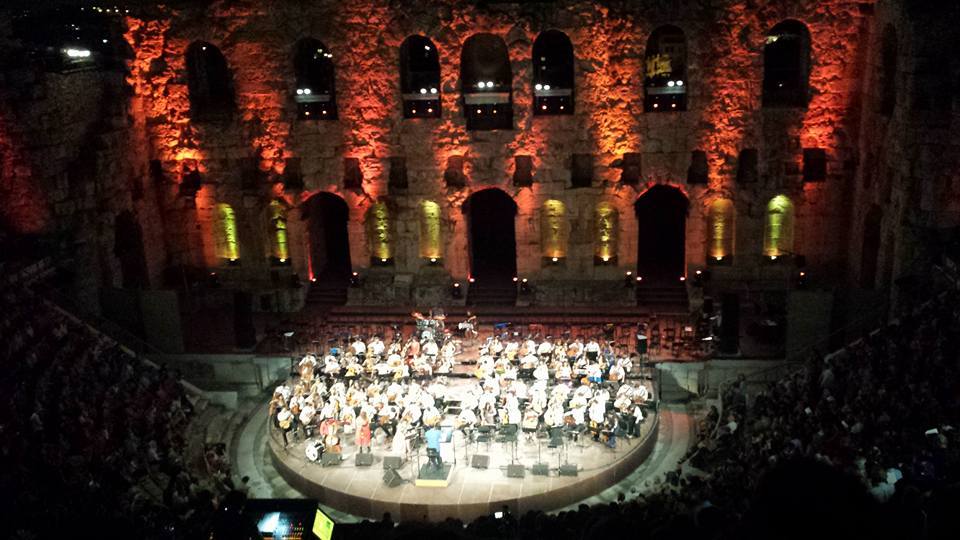 October narrowly misses out on being the best time to visit Athens, because the weather starts to become less predictable.

Sure, there can be some lovely warm days, but those rain clouds start to drift in over the mountains from time to time.

It is around this time of year, that the archaeological spaces go on to ‘winter opening hours'. Many of them will close at 15.00. I've a full guide here to visiting Greece in October. Another guide here to what to do in Athens in October.

Note that Oxi day (Ohi Day) is October 28th and is a national holiday.

Many people assume that due to its southern location, Athens has year around good weather. Whilst it might have compared to northern European countries, it can get surprisingly chilly.

Air-cons get switched over from chill mode to heating mode, and the daylight hours get shorter. Winter is generally not considered the best time to visit Athens.

During November in Athens, the ancient sites will haver shorter opening hours, and the weather is much cooler particularly at night. You can still eat outside, but you will notice that restaurants have outdoor heaters. Wear a jacket!

Finally, we reach December. This is the coldest month of the year, and in 2016 we had a couple of light snow days.

The Christmas season is thankfully a lot lower key when compared with the UK or USA. The absence of German style Christmas Markets perhaps doesn't make Athens a prime destination in December.

I've a full guide here: How to spend Christmas in Athens.

You might also read: Warm places in Europe in December

Readers planning to travel to Athens and wondering what the best time of year might be, often ask questions similar to:

How many days do you need when visiting Athens?

Visitors who want to see the main highlights of Athens such as the Acropolis and Parthenon as well as other important ancient sites will find that two days is enough time to spend in the city.

Is Athens or Santorini better?

Athens is a huge city filled with ancient sites, museums, and culture, while Santorini is a small island famed for its blue domed churches, whitewashed houses and sunset views. Which one is better depends on what type of traveler you are.

What is the hottest month in Athens?

August can be unbearably hot in central Athens, although it's also a quiet month because the city empties as many locals head off to the Greek islands for their vacations.

What is the cheapest month to travel to Greece?

The low season from November until March will typically have lower prices for accommodation in Athens.

Please pin this guide on the best time to go to Athens, Greece for later! 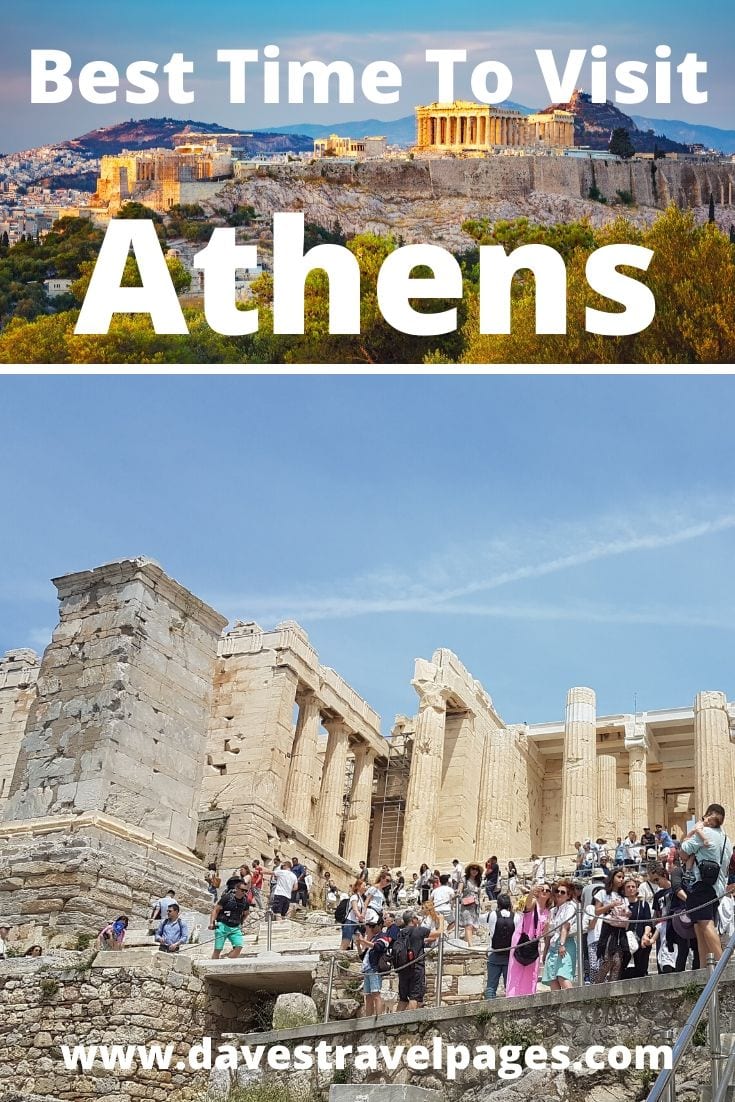 And that, my friends, is a reasonably comprehensive guide on when the best times to visit Athens are! If you are thinking of planning a trip to Athens, and want to check anything or ask me a question, just leave a comment below!