Cycling from Cartago to Buga, I met a couple of cyclists coming in the opposite direction on a tandem Dawes bicycle, and experienced a few hills. Another blog post from 2010 when I was cycling from Alaska to Argentina.

Cyclists on a Tandem in Colombia

The road today was flat as it led through a valley, so it was a great chance to bang out over 120 kms. Early on, I got caught in the rain, which has probably been a long time in coming, as I have been extremely lucky with the weather. Still, it was only for a half hour, and I soon dried out.

Along the way, I met two other cyclists in a restaurant, so I stopped for a coffee and a chat. Tim and Naomi (I am notoriously bad at names, so apologies if its wrong!) started in Argentina, and are finishing off in Cartagena.

They are riding a Dawes tandem bicycle – only the second Dawes other than my own which I have seen on this trip, and certainly the only Dawes tandem I have ever seen. 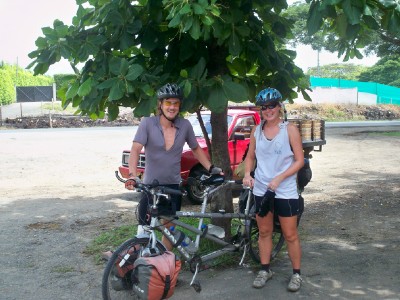 They started off just before Christmas, so my estimates of my own finish sometime in November seem reasonably accurate.

As always, it was good to swap info, tales of the road and have a conversation in English. Their website is at www.getjealous.com/cycleforfsid .

Cycling on to Buga

After an hour of chatting, it was time to push on again. The road through the valley passed by sugar cane plantations, but was on the whole unexciting. Which was fine, as I was just interested in getting as much distance done as possible.

I called it a day at Buga, and took a room which was 18,000 pesos for the night. Every hotel room is unique and has its quirks. This one, was that the bathroom area was only separated by a shower curtain from the rest of the room. Not that it bothered me any… I’ve slept in far stranger places ! 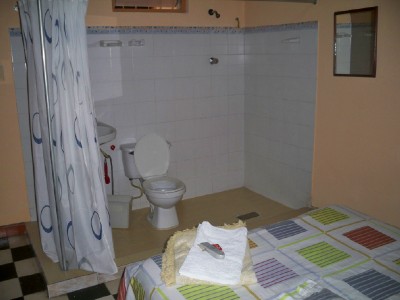