Bike touring from Alaska to Argentina, I used a cheap touring bike from the UK. This bike was a steel framed Dawes Sardar. Read on to find out how I got on with it.

Quick note – As far as I am aware, Dawes discontinued their steel framed Sardar design. This was a real shame in my opinion as it was a great bike, and could have been improved upon in further years perhaps enabling them to compete with the Surlys of the world.

This little article about the Dawes Sardar steel frame touring bicycle is perhaps for posterities sake more than anything else!

I used a steel framed Dawes Sardar bicycle on my 2009 cycling trip from Alaska to Argentina. I somehow managed to find an older version of the Sardar bike (although new), with a steel frame.

A steel frame, although heavier than aluminium, is more robust and durable – it's also easier for someone to spot weld it back together if the frame breaks in the back of beyond.

I deliberately chose a touring bike with 26 inch wheels for this trip. This was due to my previous experiences of cycling in Africa, where I simply couldn't find tyres, or rims for the 700c bike I was riding. I couldn't even get inner tubes!

I had the back wheel handbuilt, using tougher components than those that come as standard, hoping it would prevent too many problems in the long run.

As it turns out, a tree fell on the bike during a storm in the USA and crushed the rear wheel and I had to get it replaced by a cheaper one. Best laid plans and all that!

The bike had drop handle bars, as I prefer the variety of riding styles that they enable, and I fitted SPD pedals, as using clips is a more efficient way of cycling, meaning that you can pull up as well as pushing down.

Using the bike on the trip

I made the following updates during my Alaska to Argentina bike tour:

— I've used the bike for about three months now, and I really love it. The only logistical problem that I have remaining, is how to actually get the bloody thing to Alaska !!

— A month into my cycling trip, and the Dawes Sardar is proving to be a good choice in bike. My only minor criticism, is that the front fork is too narrow to take a 2 inch tyre, meaning I can't fit a Schwalbe marathon XR on the front. Other than that, the Dawes is performing admirably. 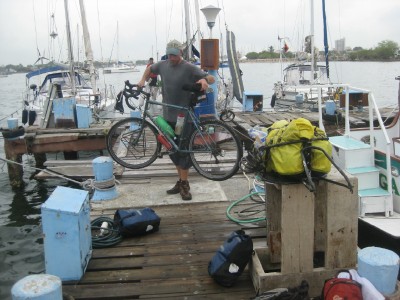 — Three months into my cycling trip, and the Dawes Sardar bicycle is still performing very well. I've tried to contact Dawes for some sort of retrospective sponsorship, but so far to no avail.

Its a pity, because if I had the ear of anyone at Dawes, I would try to persuade them to resume remaking this steel framed bicycle. I've seen a lot of Surly's out there, and so its obvious there is a market for them.

— Seven months into my cycling trip, and the Tiagra gear shifters for the rear derailleur failed. It got to the point where I needed two hands to change gear, which obviously is not ideal!

The Dawes Sardar is a lower end model in regards to some of its components, so that's something to keep in consideration . I had a cheapy two pounds gear shifter fitted in Mexico which now does the trick on the Sardar!

One year into the trip, and I can say that the Dawes Sardar has certainly proved great value. Its a tough bicycle, been through some challenging terrain, and looks like it will continue to do so ! 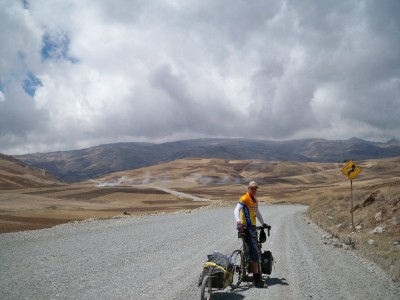