Last Updated On September 6, 2019 by Dave Briggs Leave a Comment

My bike touring blog from cycling between La Pintada and Riosucio in Colombia. Part of my 2009/2010 bike tour from Alaska to Argentina. 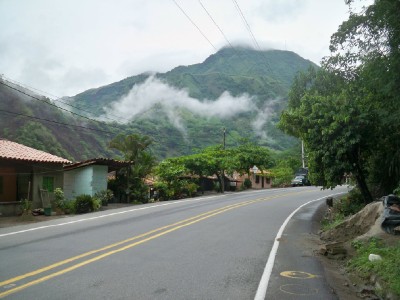 I wanted to do a longer day today, and I did, just that what turned out wasn’t quite what I had in mind due to a mistake in bike touring navigation.

Initially, the road was rolling out of La Pintada up until the town of Marmato. A 4000 peso breakfast along the way helped fuel me up, and although some clouds lingered over the mountains, the views were still amazing.

I was expecting to go through a tunnel just after the town of La Felisa, but it never appeared. I didn’t think much of it, as the elevation charts weren’t entirely accurate, and so it didn’t really surprise me that the tunnel didn’t exist.

Cycling upwards, sweat pouring from the exertion of having to use the grinding gear as I towed all my gear up 10% inclines as I headed towards the town of Irra. Two hours later I passed a sign saying Supia as I cycled into a town.

Supia ? Supia ! Shit, bugger, fuck, I must have taken the wrong road ! How the buggery bollocks did I manage that?

A quick consult of the map, and I deduced that this road must have been the original route over the mountains before the other road with the tunnel was built. I must have missed a signpost somewhere. Arse. 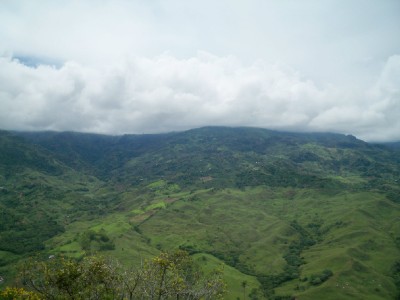 Turn back or carry on?

Although in terms of kilometres I wasn’t that far from the main road if I decided to return and go back down, the two hours of grinding up hill and the height gained was something I didn’t want to give up, especially as once on the correct road I would need to cycle uphill again.

Consulting the map again, it looked like I could take a series of minor roads, and theoretically at least, cut the corner of the route I had originally in mind.

If I did this, I would have the positive aspect of being able to see some views and villages little visited by other cyclists whilst cycling on much quieter roads.

The downside being that I had zero knowledge of the road conditions or mountains ahead. Ah, what the hell, a quick blast into the unknown might do me some good.

So, pushing on, I continued cycling uphill to the town of Riosucio, where I called it a day. They definitely don’t get many tourists up this way, especially big, sweaty English ones on a bicycle towing a trailer!

Still, everyone was friendly, and it felt good to get off the beaten track. A hotel room on the main plaza was 14,000 and an almuerzo 5000.

I spent the evening eating, as I had in mind to cycle somewhere around the 100 km mark the next day.