Last updated on September 6, 2019 By Dave Briggs Leave a Comment

This bike touring blog post is from May 2010, when I was cycling in Colombia on the way from Alaska to Argentina. This covers the day cycling from Medellin to La Pintada.

Cycling out of Medellin

A 06.30 start (the earliest for some time!) saw me out of Medellin city centre before things got too crazy there. A three lane highway led out of the city which was busy and filled the air with black smoke. I look forwards to the day when the oil finally runs out or becomes too expensive too use, and everyone is on bicycles!

About 15 kms out of the city, a bypass took me around the town of Caldas, and from the beginning of this, began a 20 kms or so climb up to the town of Versalles. 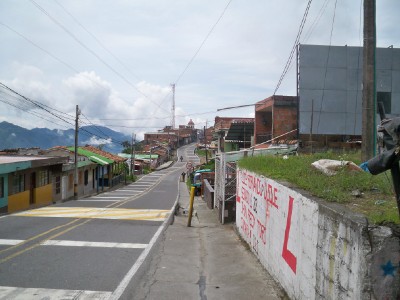 A pretty tough cycle, which my map claimed led up to 1800 metres high, but all my other sources said was 2500 metres. I was more inclined to believe the second number as I began cycling through the clouds.

I’d love to be more professional of course, and tell you exactly from some posh cycling computer, but a guesstimate will have to do! 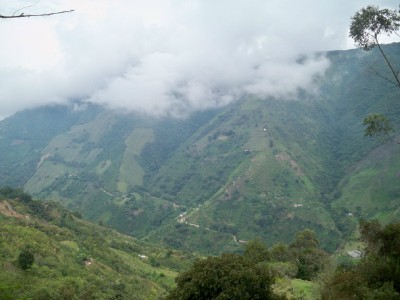 Lunch with a view

The views from Versalles were absolutely stunning, and the long descent down great fun. There’s nothing like hurtling downhill at 60 kms an hour on three rubber tyres less than two inches wide!

Along the way, I stopped off for almuerzo at a roadside restaurant. These meals really are the best value. 7000 pesos (3.50 dollars / 2.25 pounds) bought me a soup and a main course of pork, rice, beans, chips and an egg, with a coke and a cup of coffee. It would be impossible to create the same meal for the same price myself.

I had wanted to do a slightly longer day, but my legs felt heavy around the 80 km mark, and so at La Pintada I called it a day. 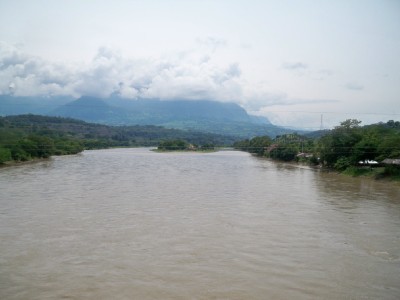 As I cycled in, an older guy in a 4 wheel drive pulled over for a quick chat, and thanked me for visiting his country before taking off again.

The people in Colombia are really friendly towards cyclists and travellers in out of the way places. They are like the Canadians or Kiwis of  South America !

Colombia is yet another country that the press has painted in one light, and reality shows it to be another. So far, Colombia is right up there with Syria and Sudan for friendly and hospitable people.