Once the cycling from Lake Quinault to Twin Harbours was completed, the real fun began when yet another tent pole snapped. Time for a little improvisation!

(Blog post written September 25, 2009) – Part of my bike tour from Alaska to Argentina.

Today was a bit of an odd one. I was up early, and so avoided paying any camping fees, and headed back down into Quinault for some breakfast.

All night I had been dreaming of food, and so I was really looking forwards to anything that wasn’t oatmeal basically. The salmon omelette was superb.

Cycling on, the countryside was non-descript, consisting of either trees that had been cut down, or trees that were waiting to be cut down, with logging trucks hurtling by.

Every now and again I would come across signs which said ‘Burns’ and underneath ‘coroner’.

Surely the political system has become so bizarre that people elect county or state coroners? Right? (Maybe our American cousins can help us out on that one, please leave a note in the guest book!!)

One of the great things about travelling, is seeing all the towns which have weird and wonderful names. 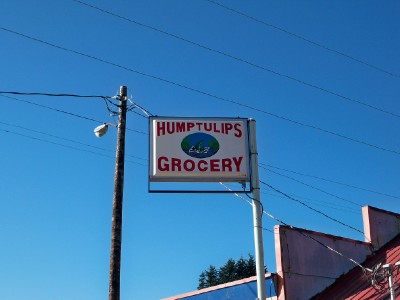 Today I passed through a town called Humptulips – Why would anyone name a town after what drunk Dutch men do on a Friday night?? All right, settle down, settle down.

On to Aberdeen, which was a bit of a hole, and had the highway surging through the centre of it rather than bypassing. Tourist information was on the other side of the road, and I waited for about ten minutes for a lull in the traffic to get across.

I’d still be there now, if a pedestrian a little further down the road hadn’t got knocked over, bringing the traffic to a stop.

The girls in tourist information were very helpful, and I also filled my water bottles up there. Then it was on to Twin Harbours state park campground.

As I was putting the tent up, a third pole snapped, and this one, I had no way to repair.

I’d just done a 100 km day, so it wasn’t terrific news, but I had to put something together.

I managed to separate the inner from the outer, and then erect the tarpaulin over it. It looks a bit rough, but it does the job. Those SAS survival course came in handy in the end !!

I’m not sure how well it would stand up to a downpour, but if it does, then I may not even bother replacing the tent. I have to look at the positive side – I will now be travelling lighter, and have more options for stealth camping. Anyhow here's the vid…. Enjoy !!!…

Additional Note – The campsite is inundated with frogs. A bit weird.

More updates from this bike trip:

– Dave Briggs
Dave wrote this travel guide about cycling the route from Lake Quinault to Twin Harbours when bikepacking from Alaska to Argentina.