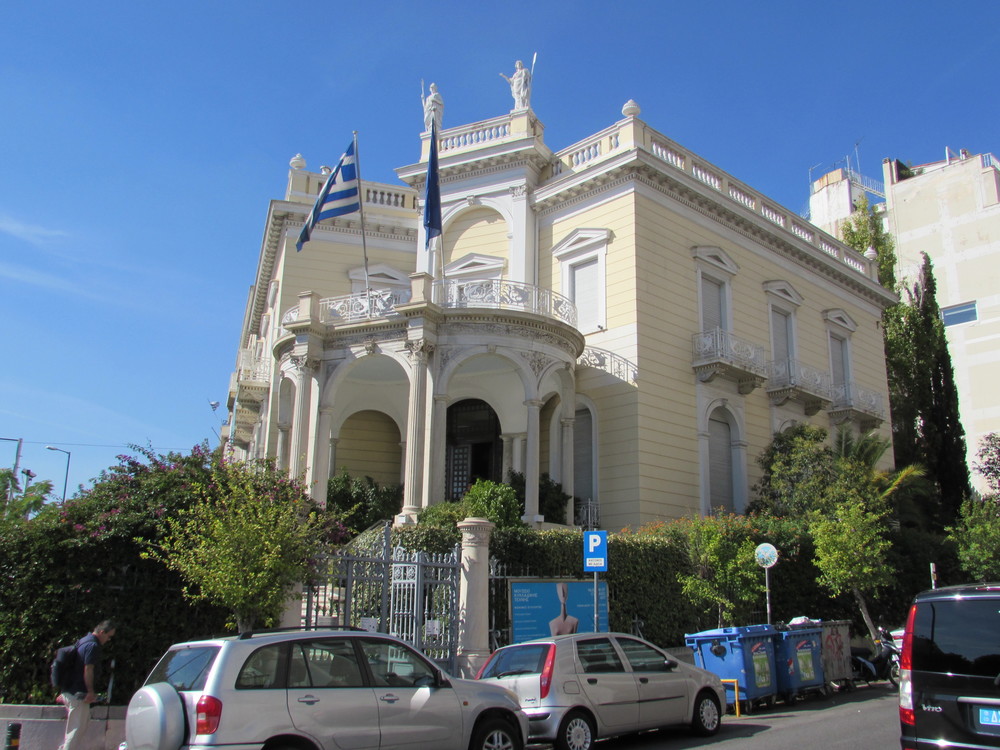 If you are spending any time in Athens, you'll want to check out some of the amazing museums there. The Museum of Cycladic Art is one that you'll want to add to your Athens itinerary. The museum contains a collection of artifacts, with the most distinctive being Cycladic figurines.

Museum of Cycladic Art in Athens

The Museum of Cycladic Art is made up of two interconnected buildings.

The permanent collections, are housed at 4 Neophytou Douka Street (entrance pictured above).

Temporary exhibitions are located in the Stathatos Mansion, a picture of which is below.

The museum is open every day of the week apart from Tuesday. On Thursday, the Museum of Cycladic Art is open until 20.00.

The permanent exhibition is displayed over four floors. 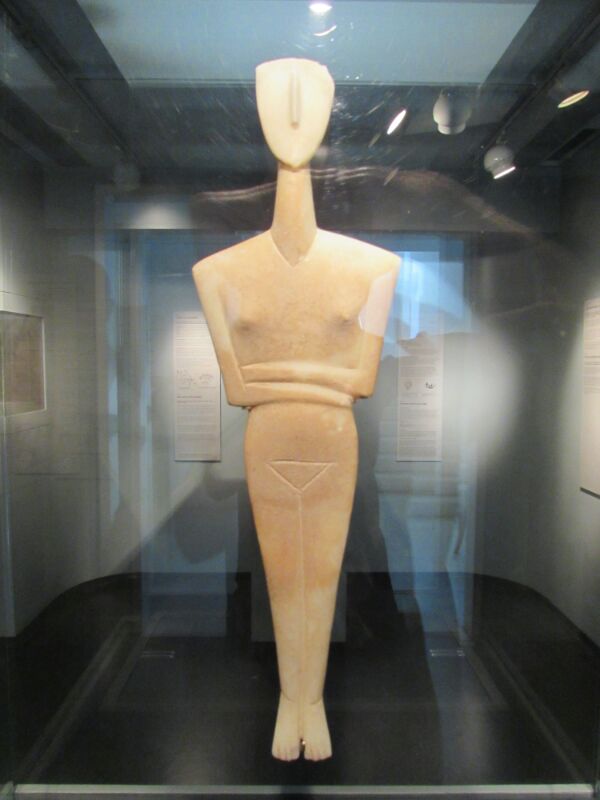 The first floor is of course what gives the museum its name. It contains many of those iconic Cycladic figurines, which seem to project an enigmatic mysterious aura.

No one is quite sure as to their purpose or meaning. Some people think that because of the crossed arms, and that many were found in burial sites, they may be to do with funerary rituals.

Are these figures representative of the deceased? Are they figures to be worshipped? Perhaps we will never know. 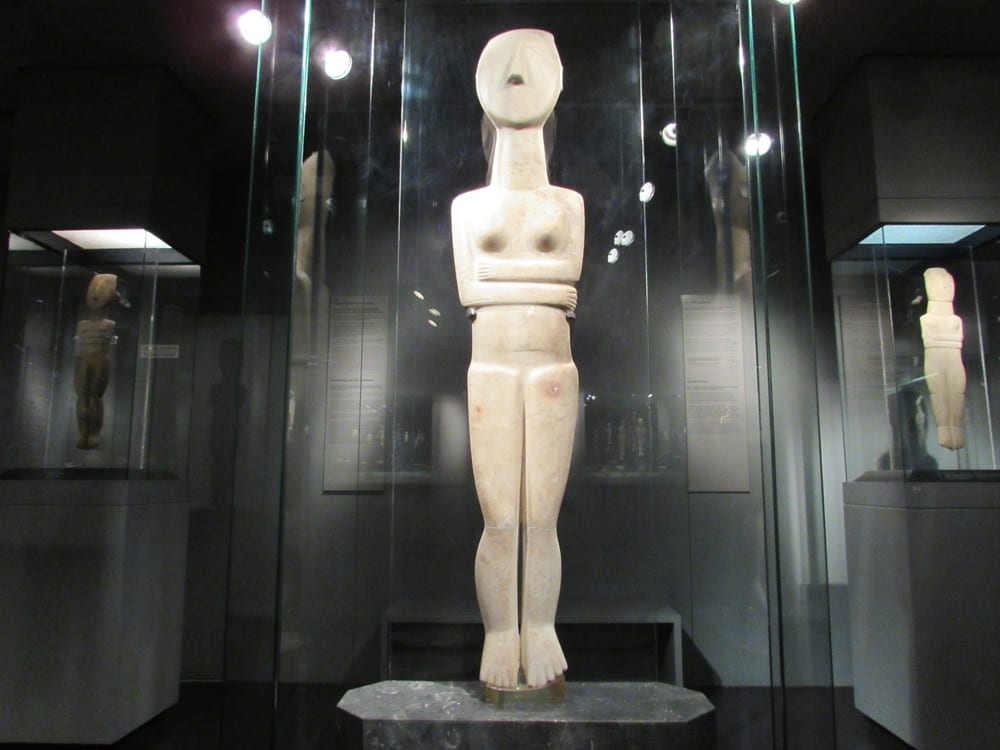 The tallest one is 1.4 metres high, and is pictured above. Whenever I see them, they also remind me of some other ancient statues in Peru. These are separated by some considerable distance in time though, as the ‘Cloud People' have been dated to the 1400's.

Still, the style of the tilted head is intriguingly similar. I have pictured them below. What do you think? 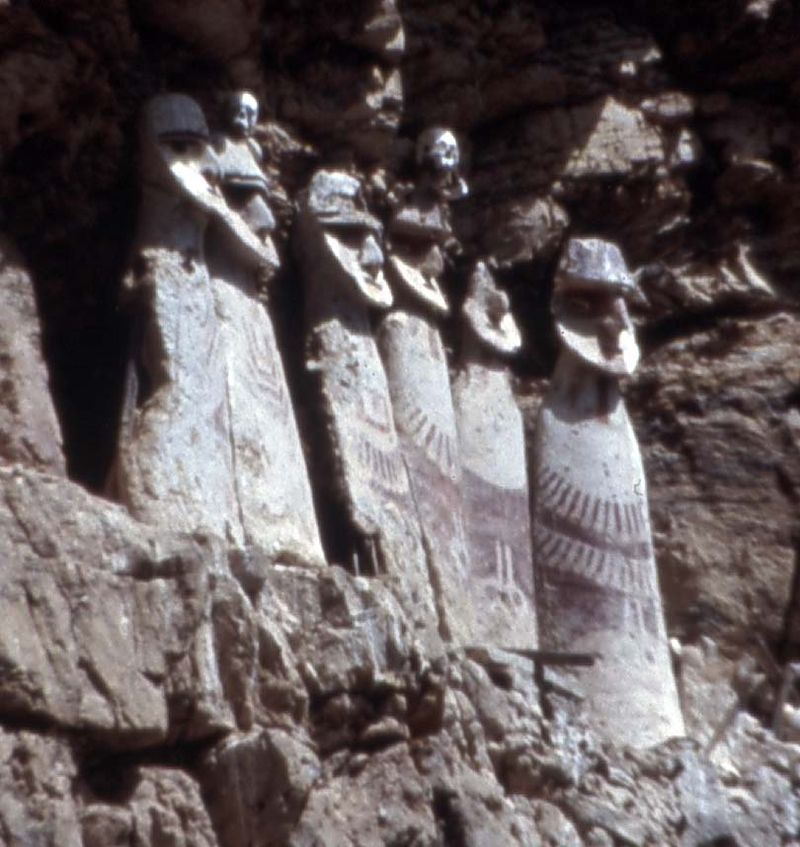 “Karajia1” by Papiermond at the German language Wikipedia. Licensed under CC BY-SA 3.0 via Commons.

This art form lasted approximately 400 years. Some of the objects were large in size. The one pictured below really caught my eye though, and was just a few inches tall. It is a rare male figure, and looks like it is raising a glass of wine or mug of beer! 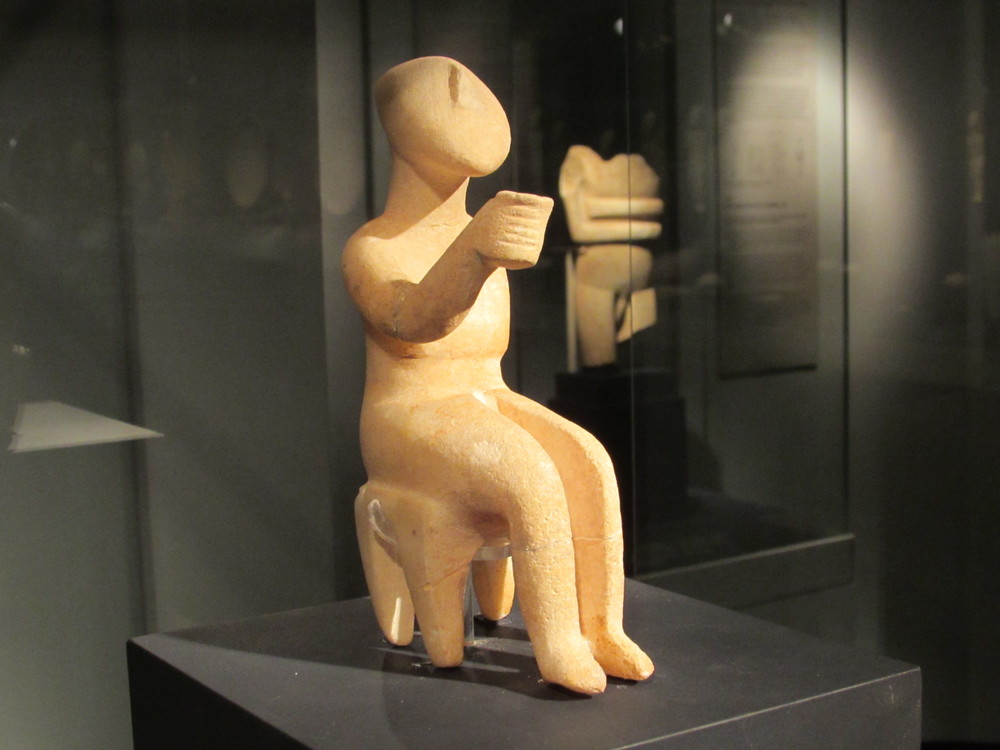 The second floor of the Cycladic Art museum concentrates on Ancient Greek Art. In effect, this picks up where the Cycladic Art period left off. (Although, there is some overlap with the Minoan Period). 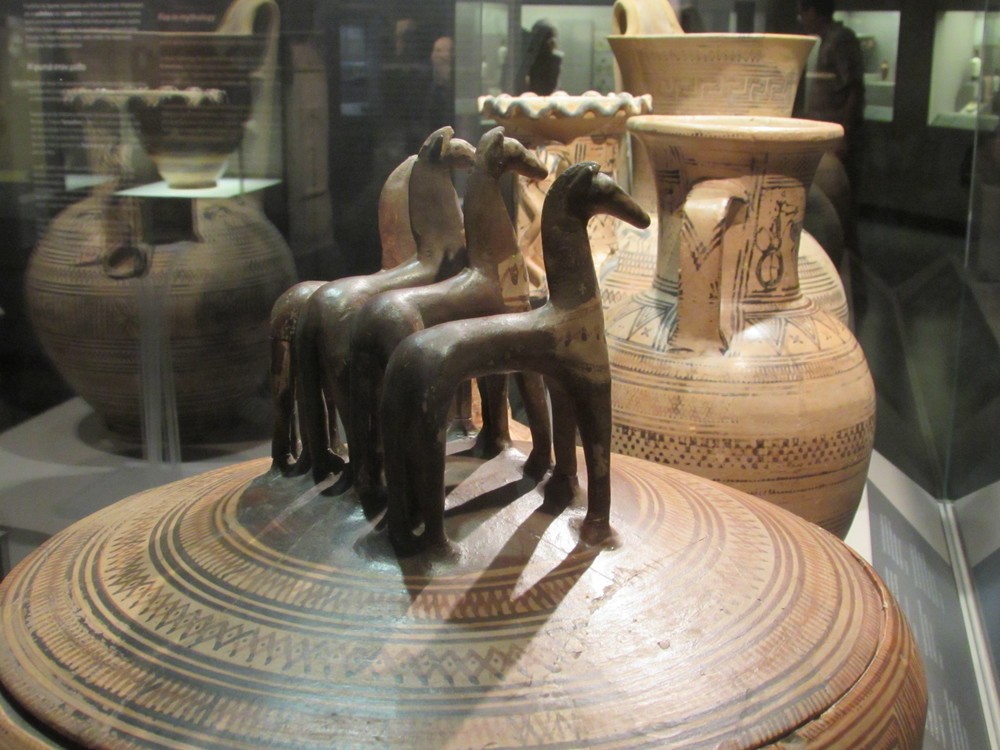 I had seen similar looking objects on display in other museums in Athens I have visited. The object pictured above was almost identical to one in the Archaeological Museum of Kerameikos. 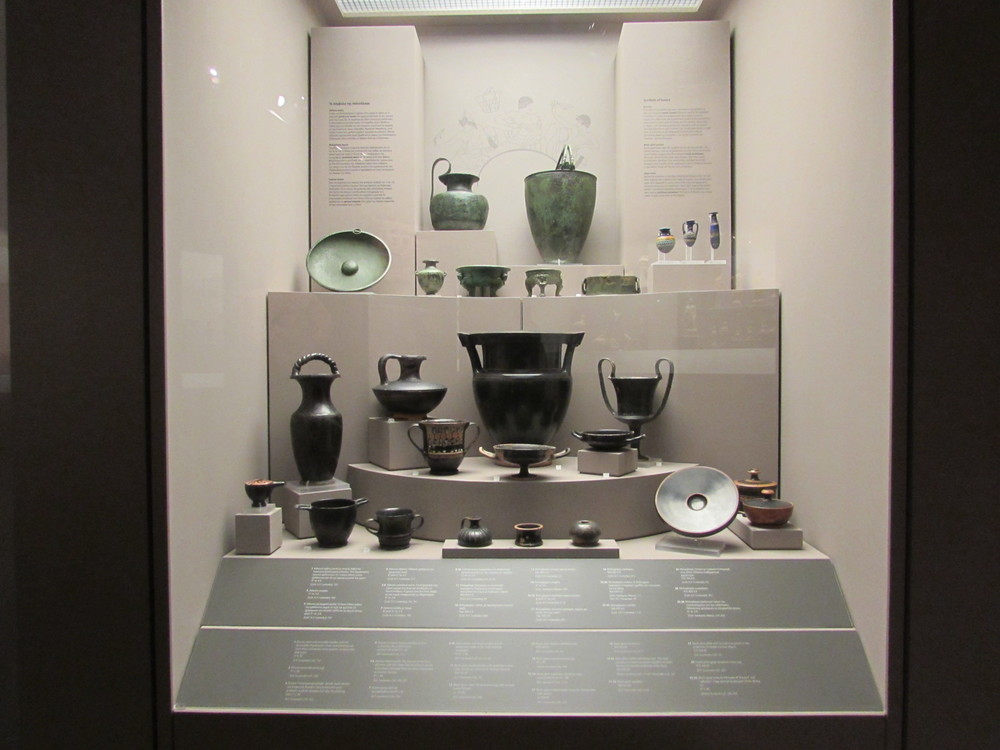 The third floor of the Museum of Cycladic Art is dedicated to Cypriot Antiquities. It was quite interesting to see the contrast between these objects, dating from the fourth millennium BC, and those of “Greece” (yes, in inverted commas!). 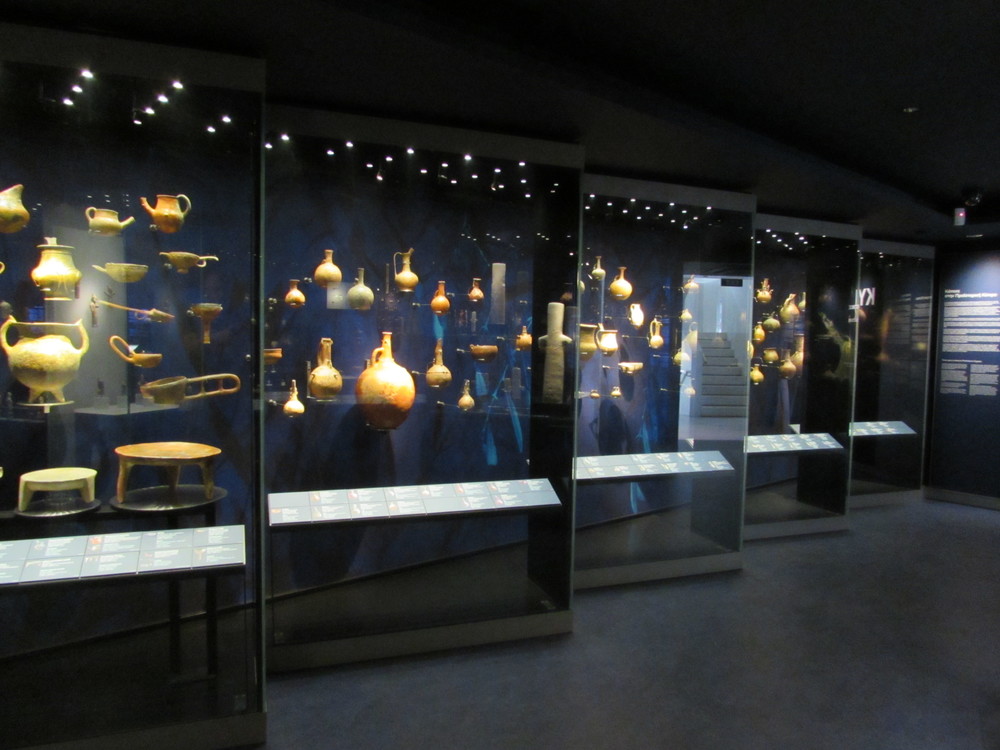 I found the lighting in this room to be a bit strange. It was too dark, although the objects themselves were well illuminated.

One of the best parts of this floor, were the interactive multimedia displays. On these, you could see how goods were shipped and transported across the seas. Ancient civilisations were a lot more adventurous, enterprising, and advanced than we give them credit for!

The Fourth Floor – Scenes From Daily Life In Antiquity

This was my second favourite floor in the Museum of Cycladic Art. Whilst the exhibits themselves were not extraordinary, the way they were displayed was brilliant.

A series of themed units clearly displayed how life was lived in ancient times, literally from birth through to death. There is also a continually playing film at the back of the room, which is well worth the time spent watching it.

After visiting this room, you will definitely come away with a clearer idea of daily life in antiquity. I would include photos of this room, but my SD card had issues… many apologies!!

Final Thoughts On The Museum of Cycladic Art

It might seem there is an endless amount that you ‘have' to do when in Athens. Add this to the list! It easily makes my Top 5 Museums in Athens.

There is a pleasant cafe to eat or take a Greek coffee in, located on the ground floor.

The closest metro station is Evangelismos.

There is an app available to download from the Apple App Store. Unfortunately, it is not available on Android yet.

Interested in more articles about Athens? Take a look here on the best things to see in Athens.

Have you visited the Museum of Cycladic Art? Would you like to? As always, I would love to read your comments below.