Last Updated On October 7, 2020 by Dave Briggs Leave a Comment

My first full day of cycling in Peru. Leaving Namballe near the border, I experienced variable road quality as I cycled towards San Ignacio. Here's my blog from the day. 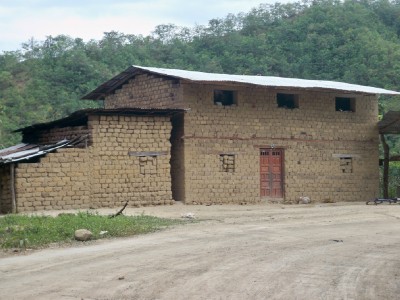 Even if I had been inclined to want a lay in, the dawn chorus of braying donkeys, howling dogs, snorting pigs and a hundred cockerels in Namballe would have prevented it. So, after a breakfast of chocolate bars and cakes (I had been unable to buy any bananas in Namballe), I hit the road.

Apart from one 5 km downhill section, it was basically all uphill, although in my favour, was that the road angles were a lot saner than in Ecuador.

The downside, was that the road quality was ten times worse. In places, it took quite a stretch of the imagination to call the collection of trenches, craters, mud pits, boulders and loose gravel a road at all.

Even the occasionally passing car was travelling slowly, and on the odd downhill sections, we would be travelling at the same speed.

At some point, my front rack on the right hand side decided to snap. Very lucky that it didn’t get tangled in the spokes and that I was able to reattach my front pannier to what was left of it. 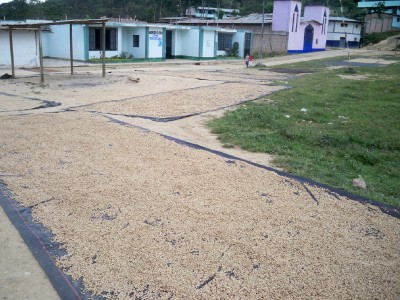 The second long climb was the worst for me. I was becoming more and more irritated with the road and heat, and although there were good views behind me, I couldn’t be bothered to look at them. I just had my head down as I grinded up the seemingly never ending hill climb.

Great, more dogs snapping and snarling at my heels. Out with the stick… Whack. Got him. Carry on pedalling, just a little further…

Eventually, came the much anticipated descent into San Ignacio, where they had some paved roads. Awesome! 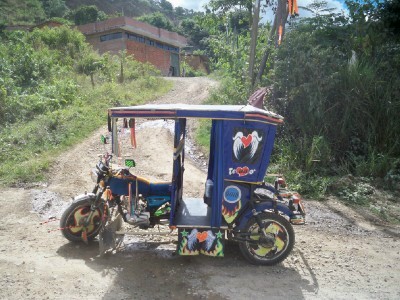 They also had these motor-taxis as the most common means of getting around. This was perhaps the most pimped ride that I saw !

I booked into a 10 Sole room, and set about finding an ATM. There was one, and it didn’t accept non bank holder cards. Great.

A search for a money changer led me to a tienda, where the owner swapped me 10 dollars for Soles at slightly under the normal rate, but he rejected a 20 dollar bill with written numbers on it.

I am left with 100 Soles, which is maybe 4 or 5 days money, so I have to make a decision to take a day off here (and I do need a day off), or carry on to a bigger town before the soles run out.

I do still have 200 dollars I can change, so I can always go back to the tienda, but what with tomorrow being Sunday, and everything of use likely to be closed, if I did take a day off, I wouldn’t be able to do anything productive.

Decisions decisions. Will decide on it in the morning, and if I have slept well, then maybe I will push on, as the next section is supposed to be easier.

Interested in bike touring gear? Check these bikepacking posts out: