My second full day of cycling in Peru saw me riding from San Ignacio to Tamborapa. Here's my blog post from the day's ride, part of my bicycle tour from Alaska to Argentina. 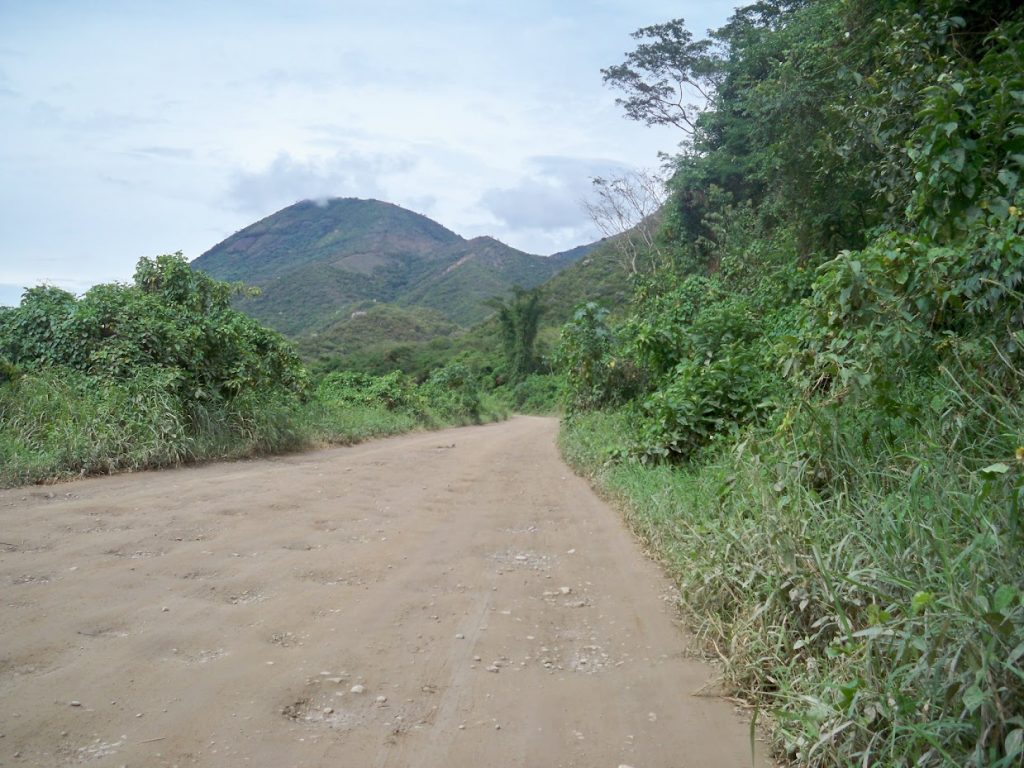 Cycling from San Ignacio in Peru

This blog post was written July 11th 2010. A blog entry from my Alaska to Argentina bike tour.

Still feeling tired, I have a wander at 08.00 in order to clear both my eyes and mind, and decide on my next course of action.

Breakfast in a cheap and cheerful place, and I stock up again with fruit and vegetables, as well as buying some strange peanut nugget block things. They taste and remind me a lot of tahine from Sudan.

The weather is overcast, and the coffee has woken me somewhat, and so I decide that it is best to cycle today. At least that way I am a day closer to solving my cash flow problem.

I hit the road, and its an initial climb out of San Ignacio, but it doesn’t last for long, and the road quality is better than yesterday.

About six km later, I begin my 15 km downhill section, again a rough road, although there are tantalizing glimpses of short 10 metres sections of ancient tarmac. This whole road must have been paved at some point, and for whatever political reason, left to crumble far beyond the hope of saving it. Such  shame. 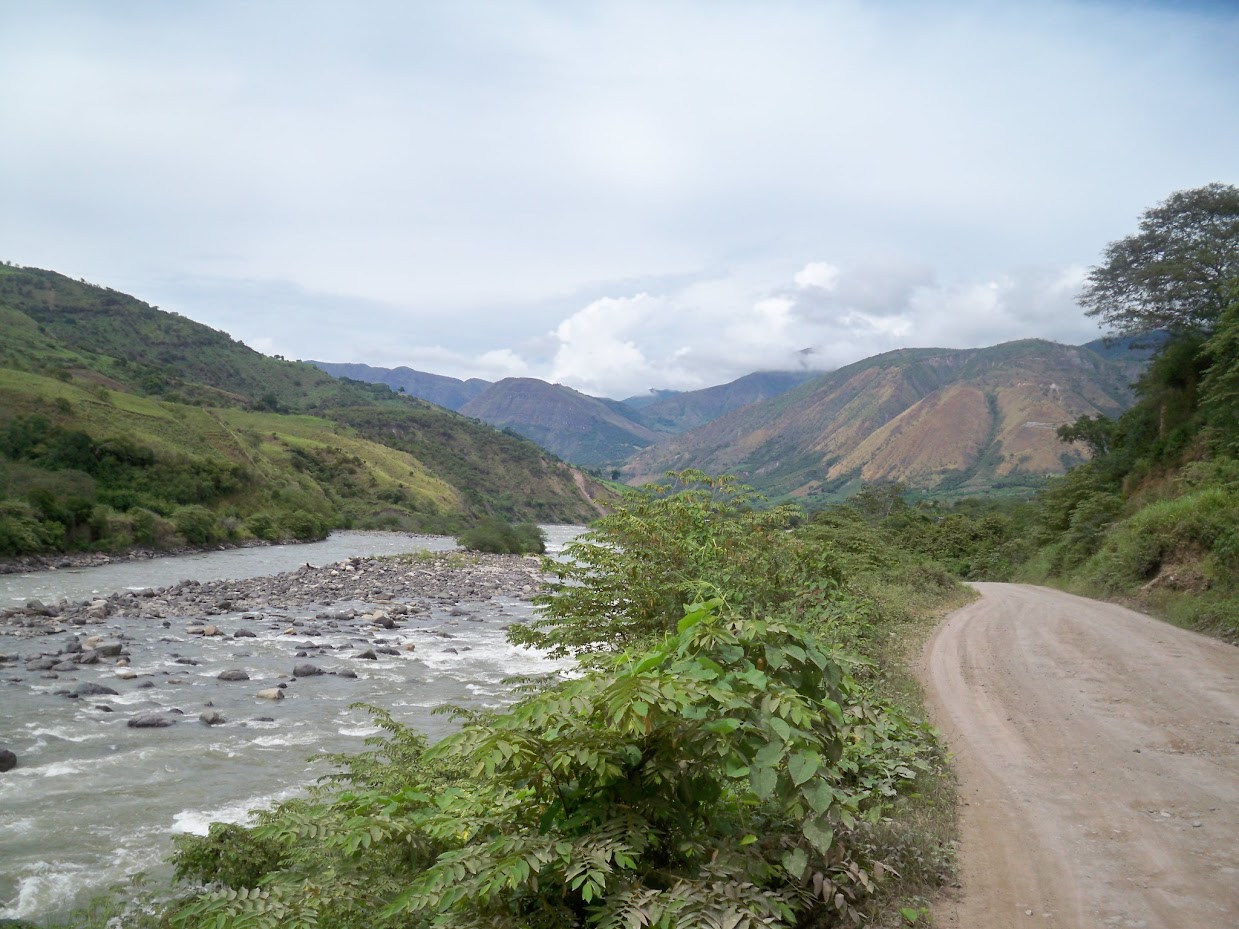 The downhill section is ok, and I have stretches of relative smoothness, but I need to pay attention, as every now and then I will suddenly come across parts with the most awful corrugations or areas that look like the Peruvian Army had some mortar practice. 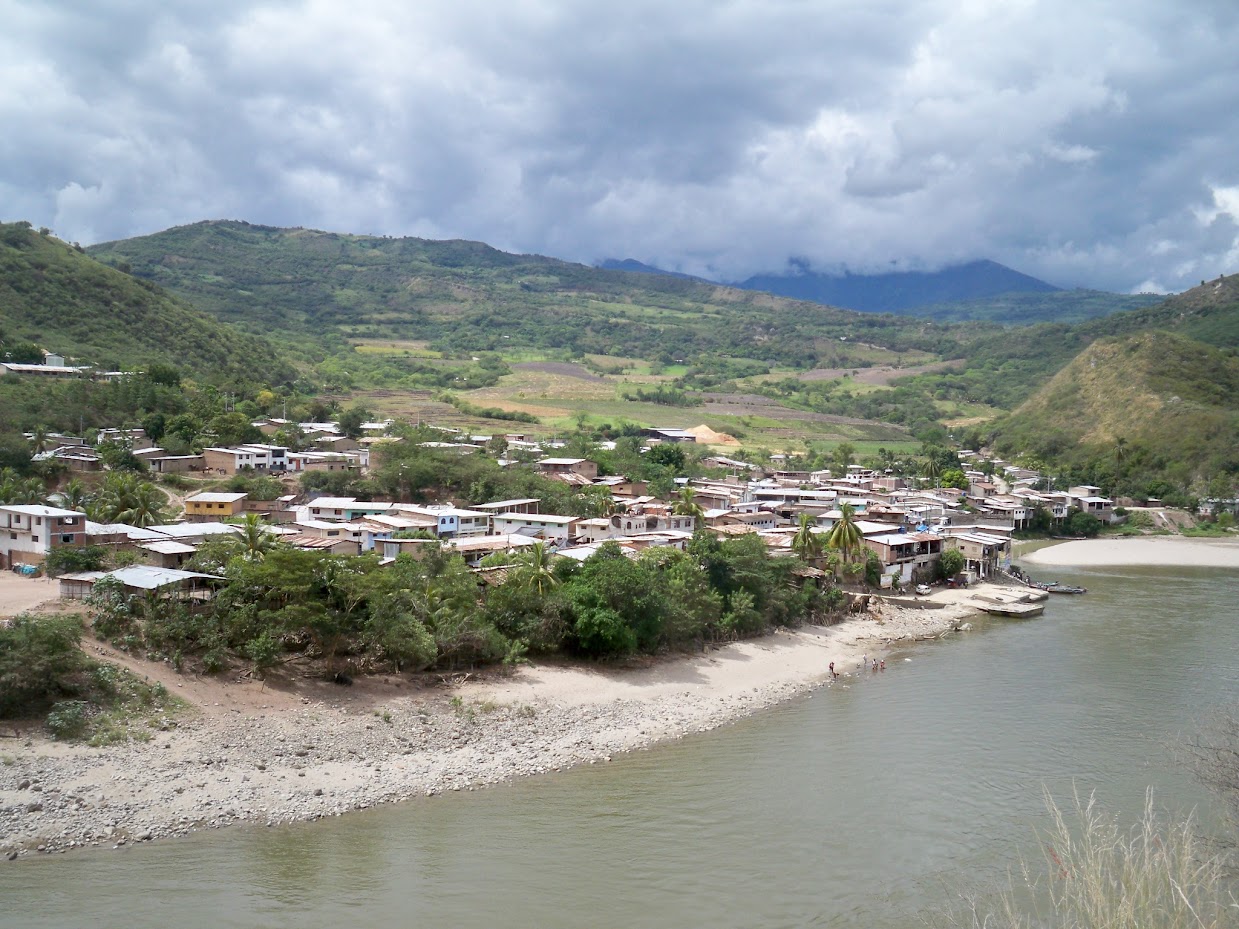 I level off some next to a river, and the track then follows the river for the next 25 km or so, rolling to some extent. 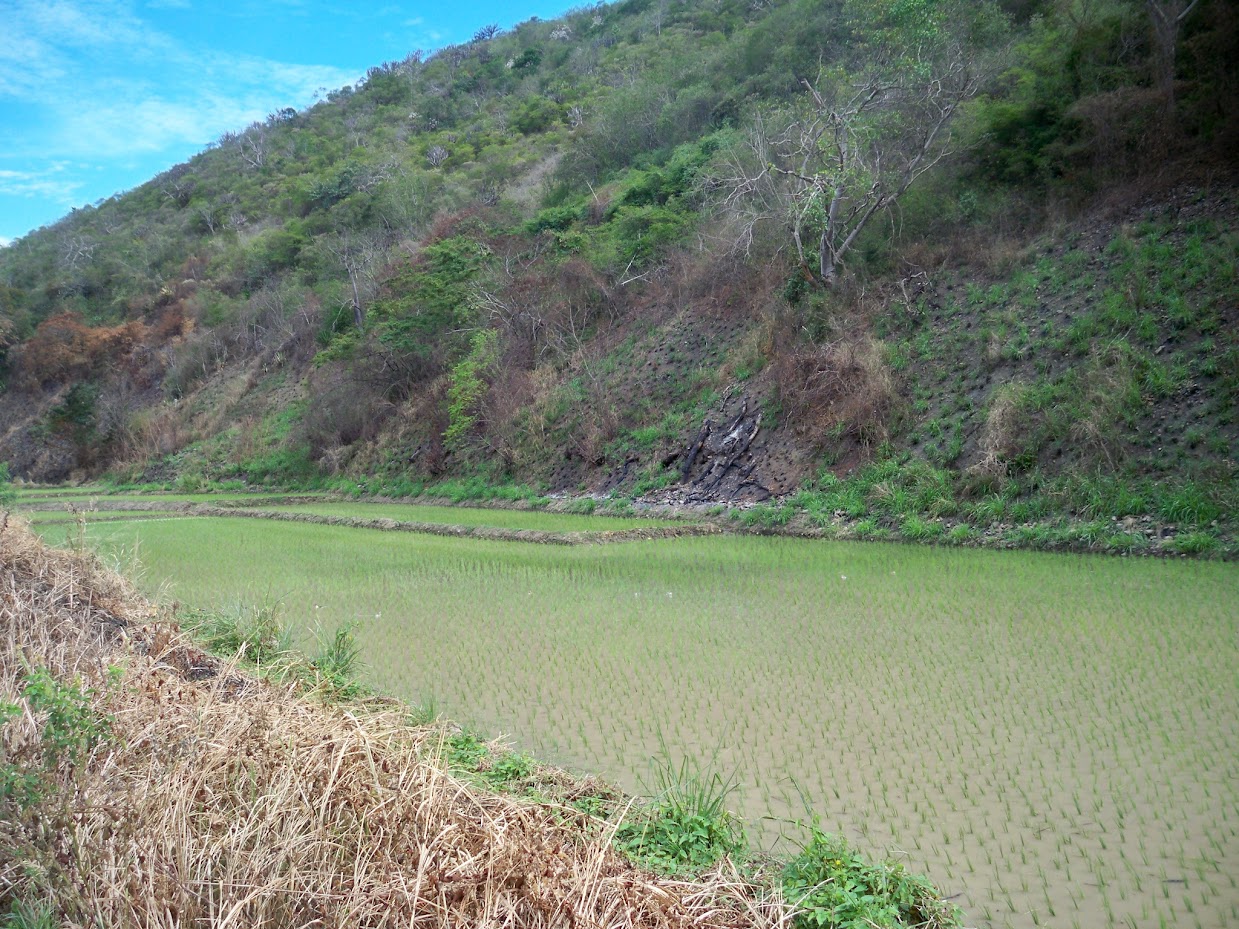 Rice fields are on either side, and the occasional village will be on the opposite side of the river, connected to the road only by a pontoon. 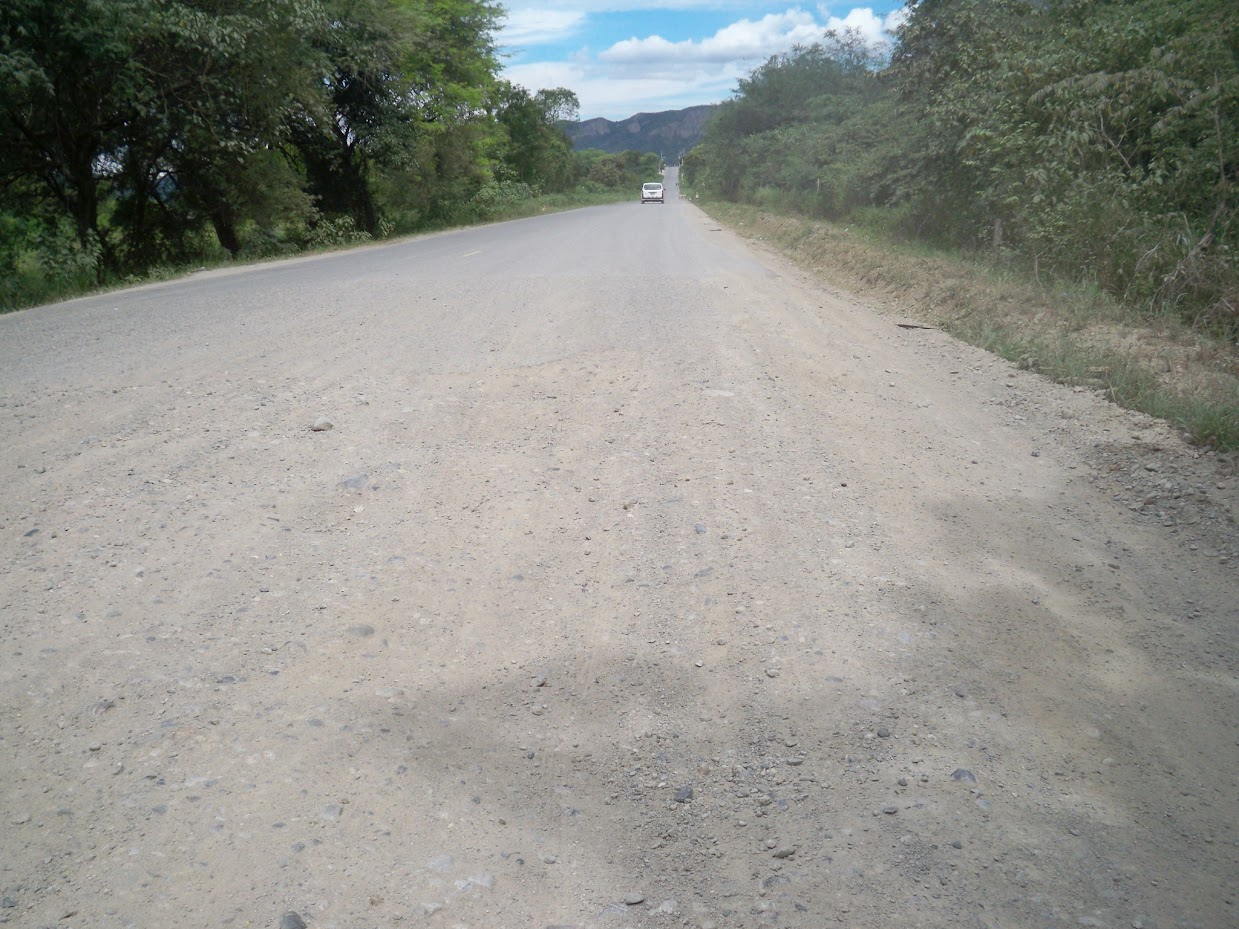 I feel a build up of tarmac, and at Perico, my dreams become reality. The blessed tarmac begins!! 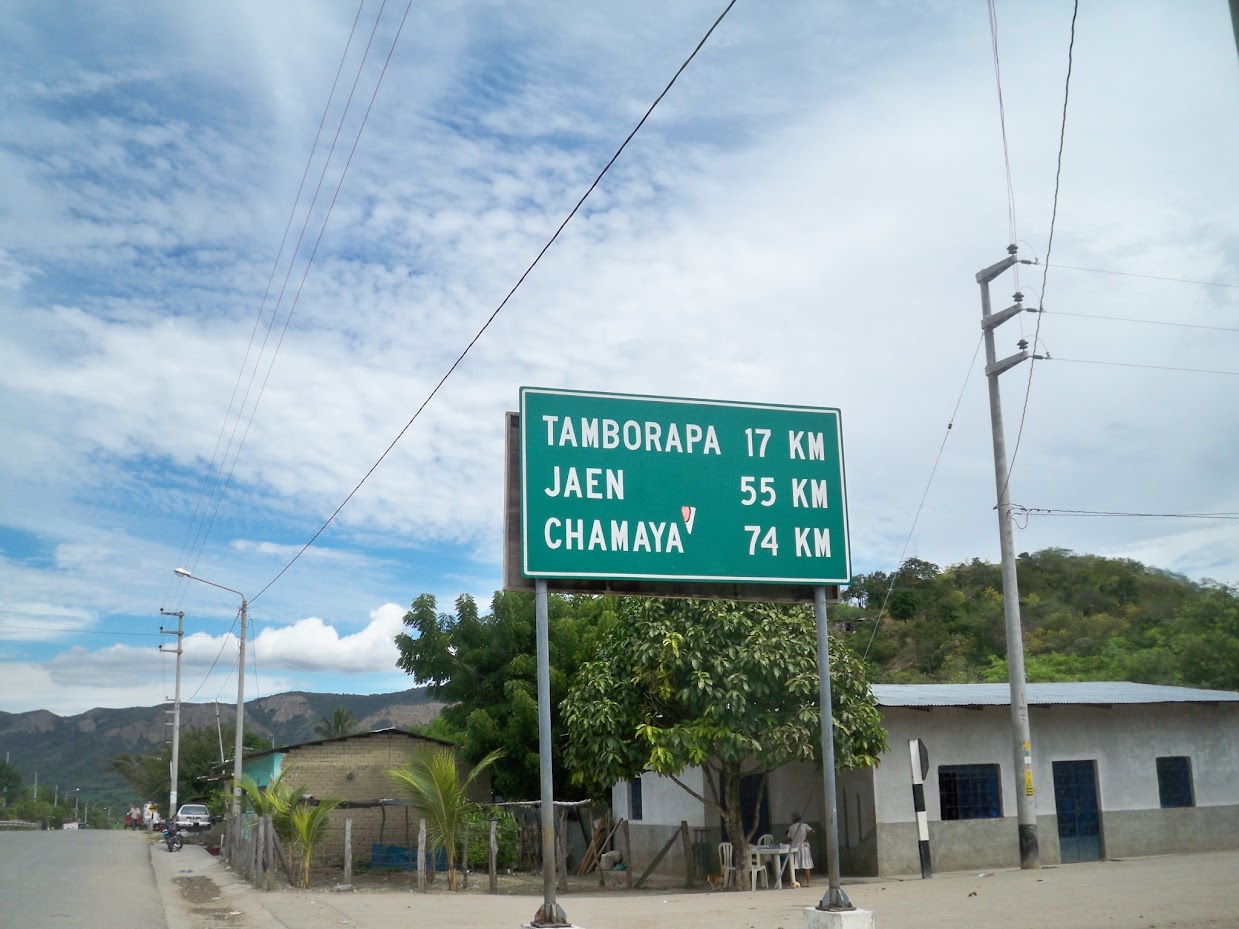 First proper road sign I have seen in nearly 1000 km ! The next 18 km feel ridiculously easy. So easy in fact, that I have to check if my trailer is still attached!

I make the small town of  Tamborapa, where the only digs are in Hostal El Leon, which is under going some renovation. 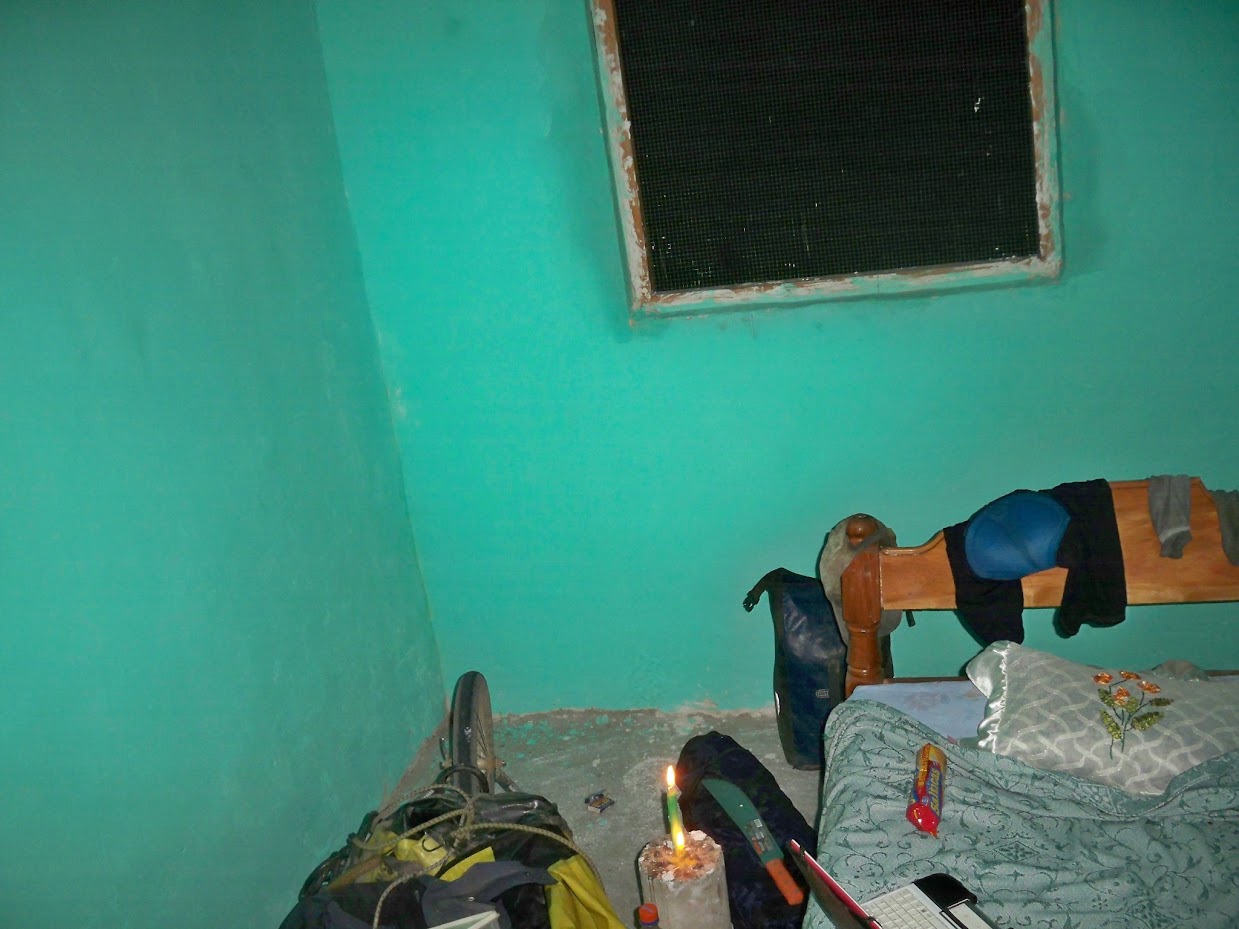 When it is finished, I believe it will elevate it from being crap to just plain dreadful. Still, even though there was no electricity, there was water in the bathroom, and I had two candles by the side of my straw bed. 10 Soles… about 4 dollars.

I figure that from here, I am 38 km from Jaen. Having no maps or decent information, I have been asking people along the way, and they all seem convinced that it is a big place with many banks. I can only hope that my ATM card works in there tomorrow, or they at least have somewhere to change dollars.

The rough route I followed can be seen here: San Ignacio to Tamborapa.