Last Updated On November 28, 2019 by Dave Briggs Leave a Comment

Cycling through Peru took me to small villages, over rough roads, and through amazing countryside. This blog post covers cycling from Tamborapa to Jaen.

This blog post was written in 2010 as part of my bike tour from Alaska to Argentina.

An uphill start out of Tamborapa for 5 km or so, but with a chicken and rice breakfast in me, and paved roads underneath, it was all fine.

Again, I was cycling past terraced rice fields, where water cleverly ran down from one to another by means of channels dug at different lengths. 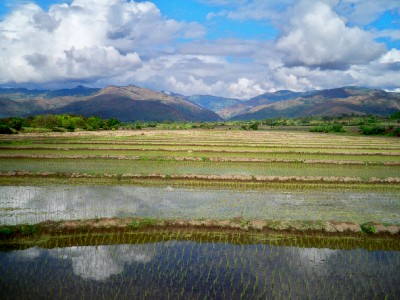 A downhill section led to the turn off for Bellavista, and I paused here a bit. Most cyclists take this route, which goes down a dirt track and then take a lancha over the river, and effectively cut 60 km whilst bypassing Jaen to Bagua Grande.

I decided against this, and pushed on for Jaen instead, as it was by all accounts a much bigger town than Bagua Grande, and I would be there easily by lunch time, giving me the afternoon to sort out ATM machines.

The road continued to roll, and 10 km later I was in Jaen, which was maybe 5 times bigger than San Ignacio, and would surely have everything I need.

I checked into Gran Hostal Libertad, which was reasonable at 15 Soles a night with own bathroom and cable TV, so I decided to take the room for three nights, as both my bike and body could do with a bit of a rest !

Finding a few ATM machines was easy, but I was again greeted by the problem of my debit card not working. Each time I would get the message “Not able to connect with bank, please try again later”.

I once more had to withdraw cash on my credit card. I at least have cash now, and a couple of days off to decompress before hitting the road again has been well earned I think !