Today's section of cycling across Mexico took me from San Jeronimo to the famous city of Acapulco. I admit to singing the song to myself as I cycled in!

I left Hotel Coloso (yes, really) at about 8.00 and hit the road. It was another day of pretty easy riding, although today, the amount of rubbish on the roadside was really noticeable.

A lot of the bike touring blogs I read mention the rubbish, but until today, I hadn’t found it too bad when compared with other countries around the world.

In the more hilly regions of Mexico, most town's rubbish dumps are located on a hill, just outside of the town, normally off the road by a hundred metres or so. The rubbish generally isn’t land filled, but thrown from peoples vehicles into the general area, and then occasionally set fire too.

Because these areas are rarely signposted or fenced, and are still visible, some tourists assume that people are just dumping their rubbish anywhere, which isn’t necessarily the case (although, sometimes they can’t be bothered to go as far as the dump, and just launch it from the back of their vehicles anywhere).

Recycling – We need to make it work

The villages I passed today, however, were different in that they were on flat lands, and had no hill to take it too.  Instead, they dumped it on the roadside on the village boundary.

The rubbish is predominantly plastic bottles, and used toilet tissue (which can’t be flushed down the toilets). With tin and drink cans being recyclable for pesos these are rarely thrown away.

Now, obviously it is a shame that the viewable countryside was spoiled – But the thing is, that even if it was land filled, it would still be present. Landfilling it, as we do in say England, does not make it disappear or invisible. It is still there.

So, I guess what I am trying to say, is to have a look at the rubbish you are throwing away, and ask yourself  ‘Could I have bought that in another recyclable package?’, ‘Did I actually need that?’, and importantly ‘Can I recycle this instead of putting it in the black bag?’. I'd definitely recommend using a water filter for travel simply to cut down on the amount of plastic bottles used.

Related: How to use less plastic when you travel

Anyhow, now that bit of tree hugging is over with, back to the travelogue…

Approaching Acapulco, there were some roadworks and a series of hills, with traffic backed up for some way. I was beating some of the traffic uphill it was that bad.

Then, it was the crazy descent into the sprawling city, and cycling through the mayhem. It wasn’t as bad as cycling through say Cairo, or Istanbul, but it was mad enough, and called for awareness!

I made my way down to the malecon, and found a hotel. For 200 pesos a night at Hotel Del Angel, I have got the most awesome view out over the bay in Acapulco possible. 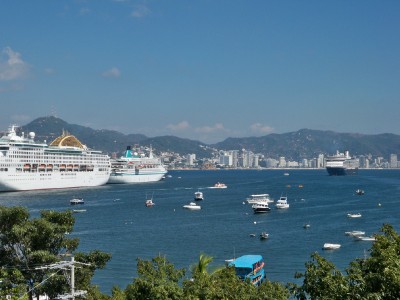