This bike touring blog post covers my experiences cycling in Egypt, which was a part of my 2006 bicycle tour from England to South Africa. 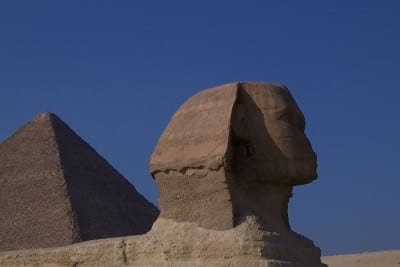 Today was an R and R day in Suez, which basically involved a lot of eating and drinking.

Most people who have cycled this route take two days, but I couldn't be arsed with that, and decided to do it in one. The wind was a bit unkind for the first hour, but after that, the road changed direction and I flew along.

140 kms is still a long day's cycling, especially when for the last 20 kms you are in the biggest city in Africa without a map, but what the hell!

The traffic was a bit mad, but not as bad as I expected. In my mind, I was anticipating something like India, but it was far calmer. Still crazy, but a more chilled crazy.

I somehow found where I needed to be, downtown Cairo, and booked into the Dahab hotel for five nights. A bit of an arse getting the bike up to the seventh floor, but the single room costs 25 Egyptian pounds a night, so no complaints here!

Visiting the Sudan Embassy in Cairo

The next country on my bike touring route to South Africa would be Sudan, and I needed to get a visa in advance. This would involve getting a letter of recommendation from my own embassy in Cairo.

Still, a piece of paper is a piece of paper, and it was onward to the Sudan Embassy. Filled out a form, left a couple of photos with my passport and paid 100 US dollars… (what!!!!!), and was asked to return at two.

With time to kill, McDonalds was a no brainer. After that, I bought a compass (I'm going all boy scout for this next bit!), a new usb/lan connector for my laptop as my last one got accidentally but brutally stamped into a million pieces by me because it wouldn't work.

Wandered around and played frogger with the traffic, and had a couple of fruit shakes.

At two, I went back to the Sudan embassy, and….. I have it!! Yes!! I had been slightly concerned just how I would do the trip if they had refused my visa, but its all systems go now for cycling in Sudan.

Bought lots of bargain cheap food for the days ahead.

Visiting the Ethiopia Embassy in Cairo

Whilst I technically didn't need to get a visa for Ethiopia in advance, I decided it would make sense in any case just to be on the safe side.

I took a taxi over to the Ethiopian Embassy, which was nowhere near the address given in the Lonely Planet Middle East guide book. When I eventually got there, the total lack of security was in stark contrast to the British Embassy, plus there were only three people working in the entire place.

Filled the forms, and left my passport with them to be collected the next day.

I didn't really need to apply for my Ethiopia visa yet, as I could have done it in Karthoum, Sudan, but I wanted to get it out of the way, and I should be able to use it before it expires.

Caught a taxi back to downtown Cairo, and then spent the rest of the day in the Egyptian museum, where they tell you no cameras are allowed only after you've been through three levels of security.

You then have to return to the ticket office, leave your camera at a building next door, and then go back through the security again.

The exhibits in the museum were interesting, obviously, but they weren't labelled or explained very well. There was an audio guide available which I didn't take, but it suited me to mill aimlessly between the exhibits.

After the museum, i tried for several hours to find a map of Sudan, but to no avail. I'm sure it won't matter too much, as for the first 200 miles in Sudan, there aren't any roads either!

I collected my passport complete with Ethiopian visa at the rather inconvenient time of 11.00 and celebrated by visiting McDonalds. Caught a taxi back to downtown, and bought a new pair of trousers as the ones I was wearing were faded, stinky, ripped and had oil on them.

Talked to some people in the hostel who are travelling by 4 wheel drive doing the same trip as I am. They will probably be on the same boat as me to Sudan.

Checking out the Pyramids of Giza

I decided to hire a taxi for the day, so that I could see the sites of Giza, Saqqara and Memphis, which worked out to be about 13 english pounds, which wasn't too bad.

The first stop, was the archaeological site of Saqqara, whose main feature is the pyramid of Zoser. This pyramid is unique in many ways, as firstly it is a step pyramid, and secondly, in all probability it is the first pyramid ever constructed, and the largest human construction of its time.

In a way, it reminded me of a pyramid I had seen in Mexico called Coba, only the Zoser pyramid has not got the distinctive Mayan staircase leading up the front.

Allegedly the Zoser pyramid was the forerunner for the even more massive pyramids at Giza.

I spent a little while wandering around it, and then made my way to the only other open area of the site which was the Mastaba of Ti.

Although it was a tomb of a non-royal court official, the inscriptions and reliefs on the inside walls gave a good idea of life at the time of its construction. Many show people hunting, farming, fishing and ship building.

After Saqqara it was on to Memphis, but I found it a bit of a let down. The main feature, a gigantic limestone statue of Ramses II was very impressive, but the rest of the area was a bit nothingy.

Sphinx and Pyramid of Egypt

Then, it was on to Giza, which is where the three largest and most famous pyramids are located, right on the edge of Greater Cairo. The Sphinx in front of the pyramids is just a great thing to see, and a real highlight of my trip so far.

The pyramids themselves were huge, and despite the best efforts of the touts, drinks sellers, horse riders, camel hirers and souvenir sellers trying to spoil my day, I really enjoyed myself.

I must say though, that I have come away with less of a sense of mystery than before.

Ok, they are big, but if you've got enough guys that know what they are doing, time, and money, then building it is no problem.

Although that said, it still doesn't answer the question of why they were built though!

Anyhow, for something over six thousand years old, they looked in pretty good shape, and will easily outlast most of the buildings that the current mob of Egyptians seem incapable of constructing well. A good day.

The plan is now to cycle out of Cairo tomorrow, and follow the Nile south as I head towards Sudan.