Today, I cycled across the border from Santa Rosa in El Salvador to Choluteca in Honduras. Here's my bike touring blog from the day. 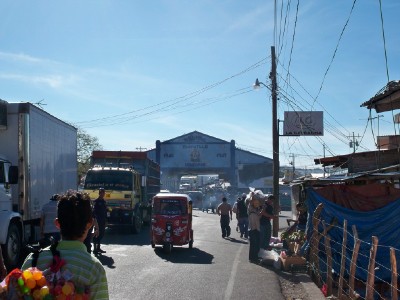 Up and away for 07.00, and through customs for 08.00. Crossing into Honduras was extremely simple, as the ‘out' window for El Salvador was next to the ‘in' window for Honduras.

A 3 dollar entry fee, and it was job done.

I also swapped 30 US dollars with a random guy walking around with a large wad of notes in his hand.

I only intended to be in Honduras for 2 days/ 1 night, but didn't know what accommodation I would find in Choluteca, so had a little bit of extra cash just in case.

After crossing the border, the landscape was noticeably more arid, and very, very hot. Quite a few drinks breaks were needed!

The people along this stretch of road were friendly and with impeccable taste (several groups of girls wolf whistled me, so their good taste was self evident

I passed through a couple of police checkpoints, where the guys flagged me down more to have a chat than anything else.

Now, in most countries, I would probably be carted off to jail for having a two foot long machete strapped to the back of the bike. Here, they just looked at it and nodded in approval ! 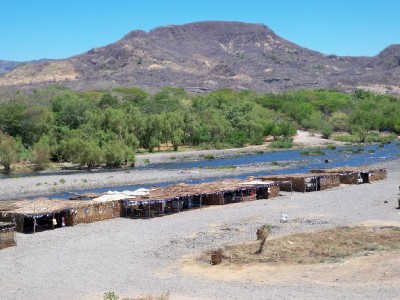 Passing through one town called San Lorenzo, I was pleasantly surprised to see a purpose made bike path stretching some 4 kms – Who would have thought ? 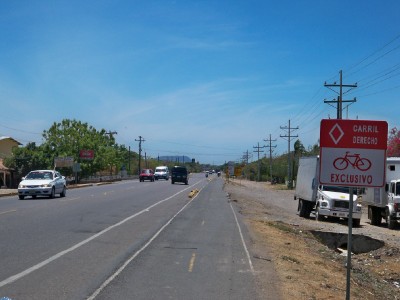 The last 40 kms were pretty tough against a headwind that blew so strong that at times, I couldn't turn the pedals. I thought I was just being weak, but Sarah later confirmed that it was very strong, having blown her off the bike!

In Choluteca, I found an affordable hotel called Hotel Pacifico for 200 Limpira a night (about 10 dollars).

This would have left me with quite a bit of cash left over, but there was a Wendy's fast food hamburger joint nearby, so I ate two meals in there to solve the problem !