Last Updated On June 8, 2020 by Dave Briggs Leave a Comment

As part of her bicycle tour along the Eurovelo 8 route through Europe, Cat spent some time cycling in Italy. Here's her Week 6 update from the cycling tour. 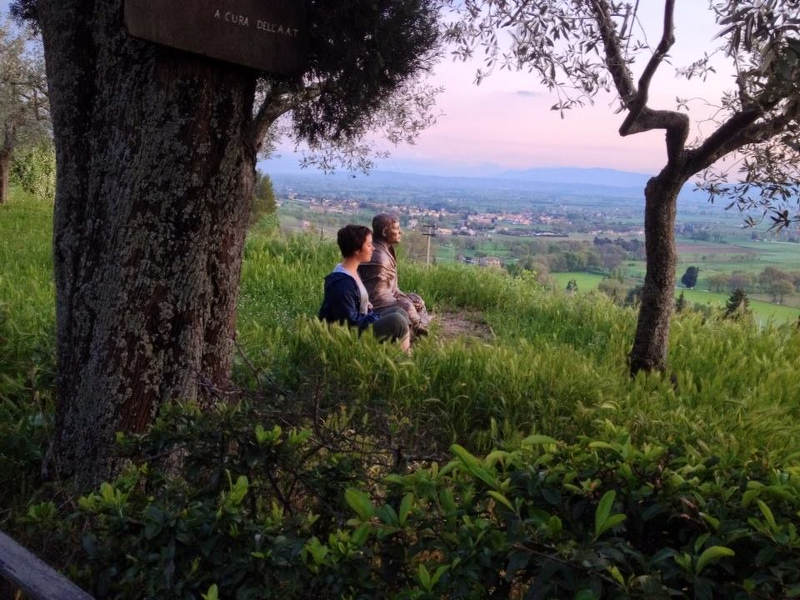 Cycling out from Florence

There are paintings of landscapes that I’ve often seen with vivid green hills with sprays of trees in shades of gold, brown and white, little brown houses flanked by two or three towering skinny dark green trees and bright flowerbeds.

I’d always thought that they were idealised depictions of rural scenery, works of the imagination. And then I cycled through Italy and discovered that they actually exist!

I rode from Florence to Siena over two days, camping in the overgrown garden of an empty crumbling house on the top of a hill.

I’ve been trying to reduce the condensation inside my tent by leaving the fly and the vents at the top open during the night. It still doesn’t solve the problem, so I have taken to wearing as many layers of clothes as possible and drying the inside of the tent each morning with my towel.

Cold rain inside the tent is a properly unpleasant thing to wake up to. This morning was no exception, giving me all the more reason to look forward to summer.

Siena is the city of my namesake, Saint Catherine of Siena. Even though I’m not religious like my parents, it held significance to me and I visited the church where her relics are kept.

It’s quite macabre, these old preserved bits and pieces of body and cloth, surrounded by bodies buried in the walls like an Edgar Allen Poe short story. 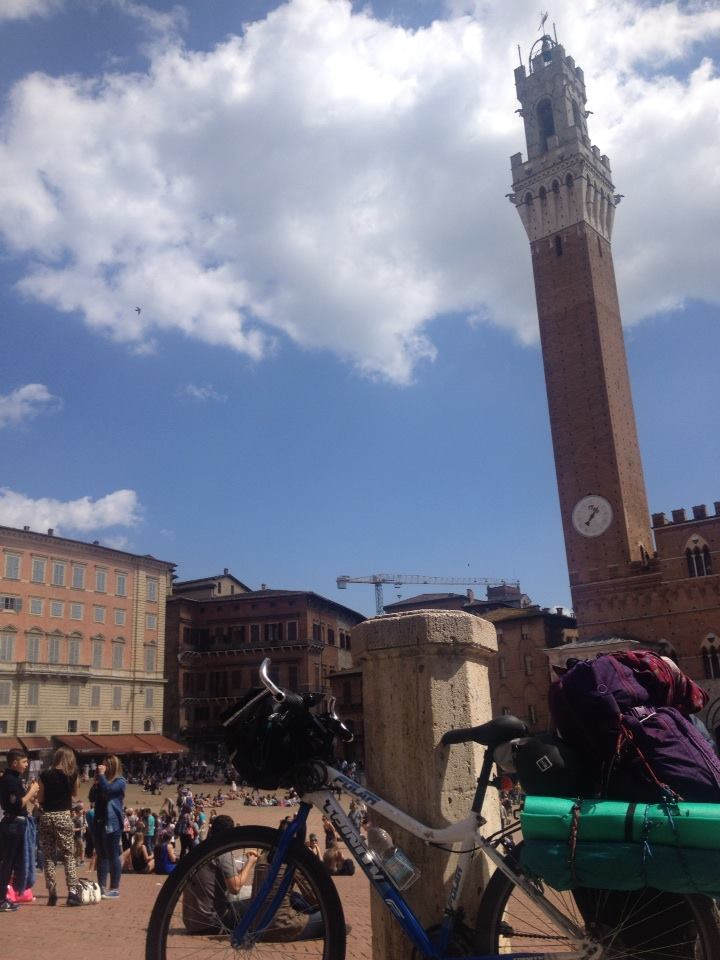 About 10km outside of Siena was the small village where I stayed with another warmshowers host, Carlo.

He is a rare Italian, a vegan cyclist who took me to my first yoga class in Europe, a kundalini class in a properly insulated salt-crystal room, complete with a tibetan gong and singing bowls for meditation.

My mind and body, especially my spine, really truly miss my yoga practice. I’m careful to stretch regularly and avoid hunching over when cycling, because it is easy to forget and end up with knotted shoulders and tight leg muscles, but a good yoga class takes it up a notch.

Carlo is also an excellent cook. Everything he made was incredibly delicious and healthy, from the dark chocolate kamut flour bread to the biodynamic brown rice risotto.

My favourite part was that over the hour that the bread took to bake, he opened the windows to let the smell waft out and in came the two neighbourhood boys, the woman from downstairs and his friend from across the road.

Each received pieces of bread and cookies. Such warmth and openness is beautiful, and for Carlo it didn’t matter that he had little left for himself, the joy was in sharing.

Cycling on unsealed roads in Italy

I took the scenic route out of Siena. In other words, I got well and truly lost on unsealed country streets with gravel, stones and potholes that rattled my bones and filled my lungs with dust.

After the gravel came great curved stretches of road that went slowly up and speeding down each Tuscan hill.

Being springtime there are lots of insects in the air, the worst of all being clouds of little flies that hit my face like a sandstorm when I ride through them, thanking Joy for the sunglasses, and trying not to breathe.

When I eventually found my way back to a town whose name I recognised, it was past midday.

I stopped in at a supermarket to buy fruit and vegetables, picnicked in a park, chatted to a Swiss cyclist who was passing through, and then asked to use the bathroom at a little restaurant packed full of jovial wine-drinking Italians.

Only then did I see that my forehead was splattered with little black spots, those blasted flies that had died hitting my face like the butterflies on windscreens of cars!

Perugia was my next stop. I write this from a pocket-sized apartment in a building dating back to the Middle Ages, tucked away in the old-town centre of the city. I’m staying with another warmshowers host, Fred, and his five cats.

Fred is a pianist and composer who likes to host cyclists because it’s like being on tour but much easier.

Last night we also had a couple from Switzerland stay, Val and Luc. They’ve been cycling for two and a half years, all the way around the world, and are about to arrive back home in a few weeks.

They confirmed my impression that long-term bicycle tourists are genuine, friendly and interesting people, ready to help in any way they can, and remarkably efficient at unpacking and re-packing their gear.

It was an absolute pleasure to spend the evening cooking together and sitting around the tiny kitchen table with the three of them.

Today Fred spent the morning walking with me in Perugia, showing me some of the unique highlights of the city. Perugia is renowned for its chocolate, so the centre is dotted with chocolatiers and patisseries.

The oldest cafe in the city is Caffe Sanori, famous for its desserts and pastries that are so prettily decorated they seem a shame to eat.

I stopped in for a petite apple tart which was simply delicious, buttery shortcrust pastry spread with a thin layer of golden custard, and piled high with finely shredded fresh apple.

It is a bit pricey, being one of the cheaper options and still costing 3.20 euros, but worth it.

Being a city on a hill, Perugia has many places with beautiful views. The best of all is from the terrace at the top of the city, over 180 degrees spanning the descending city, surrounding countryside, mountains and farmland.

I spent an hour sitting on the terrace warmed by the afternoon sun, until a noisy group of schoolchildren arrived.

My favourite part of the city was Rocca Paolina. The streets and houses of the old city were covered here by a fortress built by the Pope after he won a battle against a powerful local family.

Now the maze of old streets, piazzas and buildings are like tunnels and cells in a dungeon, atmospheric spaces used for music concerts and art exhibitions.

There was a time, years ago, when Fred worked as a security guard in the fort and he heard the rattle of chains from empty rooms in the night. If I was a child growing up in this city I know I’d both love the fort and be terrified by its ghosts.

I asked Fred for any other recommendations in Perugia and he suggested the basilica of St. Peter which is not only impressive but includes within it’s grounds a garden restored in its original medieval style.

I didn’t get to check it out but knowing how beautiful the churches in Italy typically are, and how uniquely interesting many parts of Perugia have proven to be, I would recommend giving it a look.

Also worth a mention are the Fontana Maggiore and the door to the city government building. Each are covered in intricately sculpted marble relief that are like pictorial guides to the history and industry of the city.

Perugia isn’t a city that I’d really heard about, so either I’m out of the loop or it’s an undiscovered gem. Either way, I’m glad that I had the time to spend a day here.