Cycling to the Canadian Border

It rained a lot through the night, but thankfully it had stopped by the time that I got going.

I spent the last of my US small change on snacks for the road, (more spam singles) and got underway. Today's goal was to cross the Alaska Canada border by bicycle!

The initial few miles of the route towards the land border between Alaska and Canada were really good going, and I was feeling strong despite the number of hill climbs.

Then, inexplicably from nowhere, my knee went from fine to completely unusable – ie it wouldn't bend at all. I honestly thought I was in real trouble at that point.

This knee issue had affected me since cycling the Dalton Highway, but I thought I had recovered from it.

So, it was on with the knee strap I'd bought in Fairbanks, and down with five ibuprofen.

Now, I know that it suggests you should only take one or two every six hours, but I figured that's based on a small adult. And a small adult is basically a midget, right?

As I am three or four times the size of the smallest midget, five ibuprofen seemed the sensible amount to take.

Getting the knee together and cycling the Alaska Canada border

After a bit of walking and resting, it seemed to sort itself out enough for me to bend it adequately to cycle, so I continued as I really wanted to enter Canada today.

Strangely, at the end of my cycling day, there was no pain there at all, and the knee was fine again.

Anyhow, it was a strange day, as there was a tremendous amount of mist around. This was partly cloud (I was pretty high up), partly the smog from the forest fires, and partly the rain from the night before evaporating in the heat. 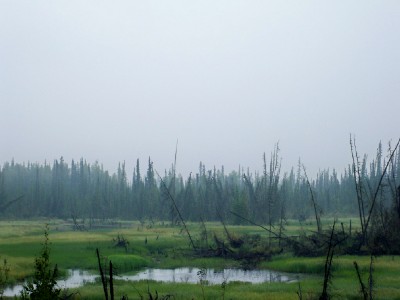 Which was a shame, because I bet there would have been some stunning views on offer as I cycled towards the Canadian border station.

As it was, I was treated to a landscape that looked almost prehistoric, as the rain had created swamps and lakes among bent trees with almost no branches, whilst mist swirled around.

Crossing from Alaska to Canada on bike

I reached the Alaska-Canada border, and I asked them to take my US green slip.

Theoretically, this means that when I come to re-enter the USA on bicycle, I will be given a new 90 day slip, which will give me more than enough time to reach the Mexican border.

There was no big deal from the border officials on either side of this international border, and I was soon into Canada!

So, that's my cycling journey in Alaska over. It's Canada now!

Starting from the next day, I am determined to embark on a few weeks of ultra budget spending, and will try to spend 10 dollars or less a day on the bike tour.

Use the links below to find more daily travel blog updates from this cycling trip:

– Dave Briggs
Dave wrote this travel guide about cycling across the border between Alaska and Canada when bicycle touring from Alaska to Argentina.