Kuelap in Peru is often described as the Machu Picchu of the north. Here's my experiences visiting Kuelap, how to get there, and more! 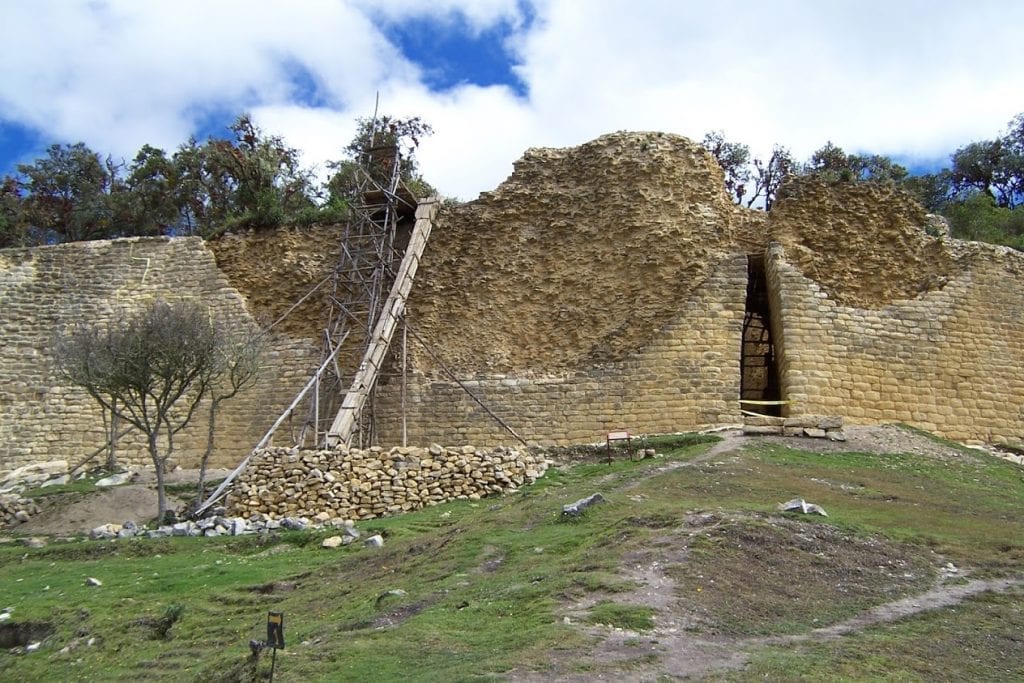 I am fortunate to have visited Kuelap in Peru twice. The first time, was back in 2005 as part of a backpacking trip through South America.

The second time, was in 2010 during my bicycle tour from Alaska to Argentina. The majority of this travel blog post comes from the second visit.

Kuelap is often described as the Machu Picchu of the north of Peru, more often than not by Peruvian tourist information in an effort to stimulate more tourism in the less accessible north of Peru.

Whilst their motives are sound, and it is a magnificent site set on a mountain top with commanding views of the surrounding valleys, any comparisons of the two sites should end there. Kuelap is unique in its own way.

If you are planning to visit Kuelap nowadays, you should note that there is now a cable car running up to the site from Nuevo Tingo. This makes visiting the site a lot easier for more regular tourists. It will also possibly make it busier.

When I visited in 2010, I hiked from Tingo Viejo to Kuelap. It took about 3 hours up to the Kuelap fortress, and 3 hours back down again.

Now the cable car to Kuelap is in place, I'm not even sure you could still do the walk. Perhaps if you've visited recently, you could let me know in the comments section!

Hiking to Kuelap from Tingo Viejo

Taking a day off from cycling, I chose to see Kuelap independently. 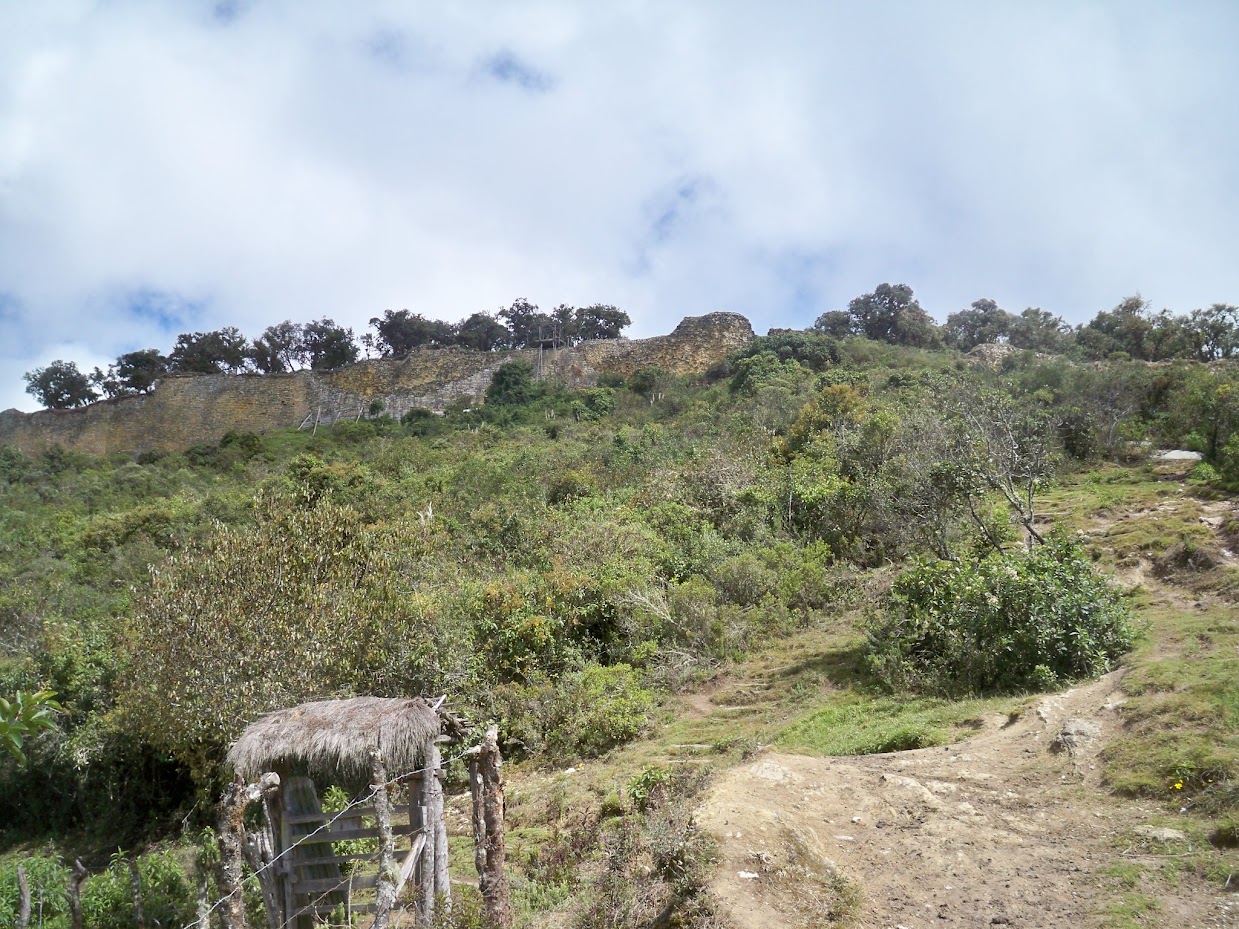 It involved a 10 km uphill hike from Tinglo Viejo over the mountains that would see me rise over 1000 metres to the 3100 metre mark. Following a rough trail I would then finally reach Kuelap itself.

I was a bit concerned that the rains of the previous day would carry on into the morning, and make the trek much more difficult, but the weather throughout the day was just about ideal.

That’s not to say the hike to the site of Kuelap was an easy one though. Granted, I am a cyclist not a trekker, but I consider myself to be at least reasonably fit, and the uphill walk took me three hours.

The track itself was reasonably well maintained and marked in a handful of places, although there were several sections which were just pure mud baths as the ground was still soaked from the day before. There were a few near arse over tit moments! 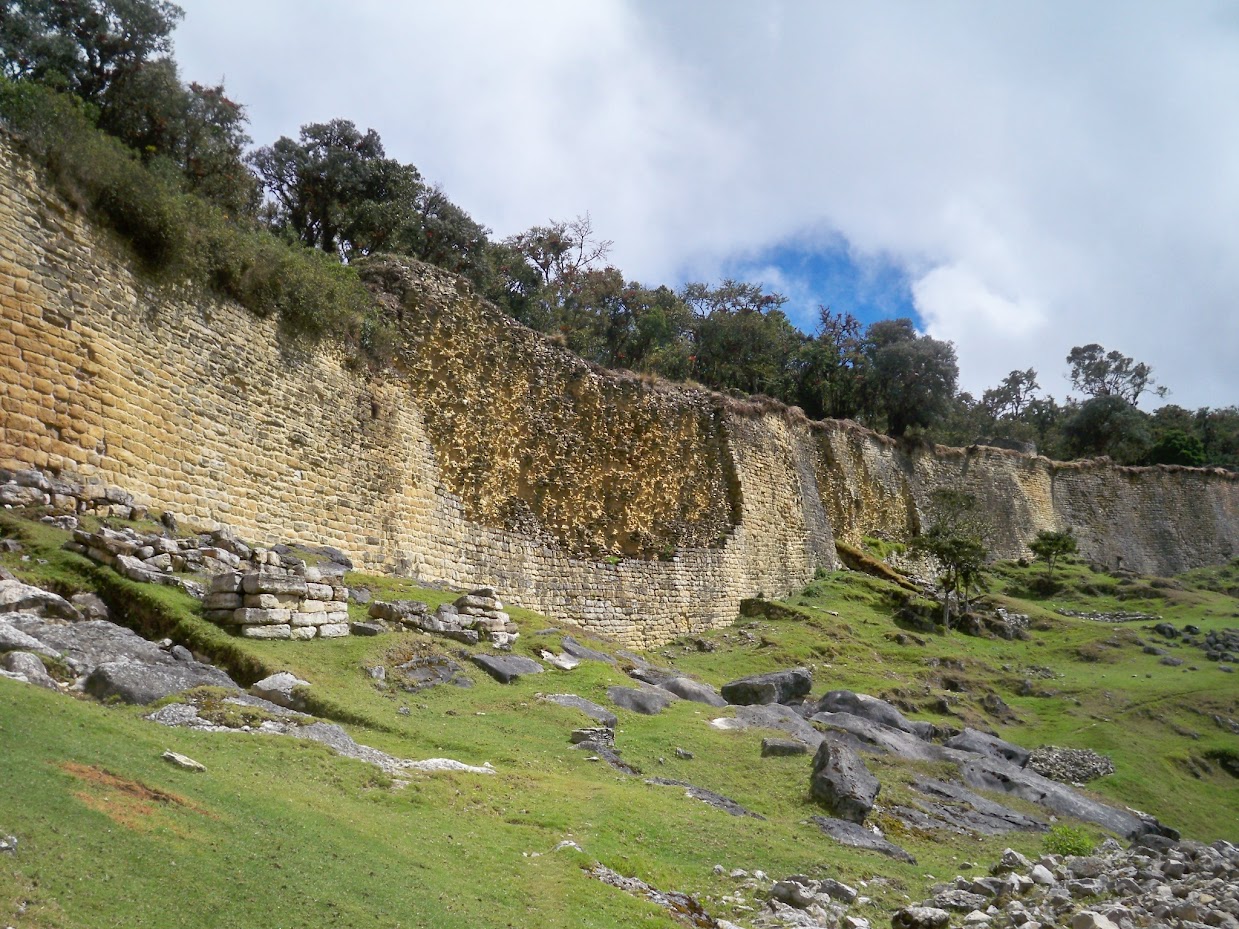 Primarily a defensive fortress complex, Kuelap is at least 1000 years old, possibly 1300 years old. Kuelap was built by an unknown people, although they were most likely the Chachapoyans or Sachupoyans cultures. 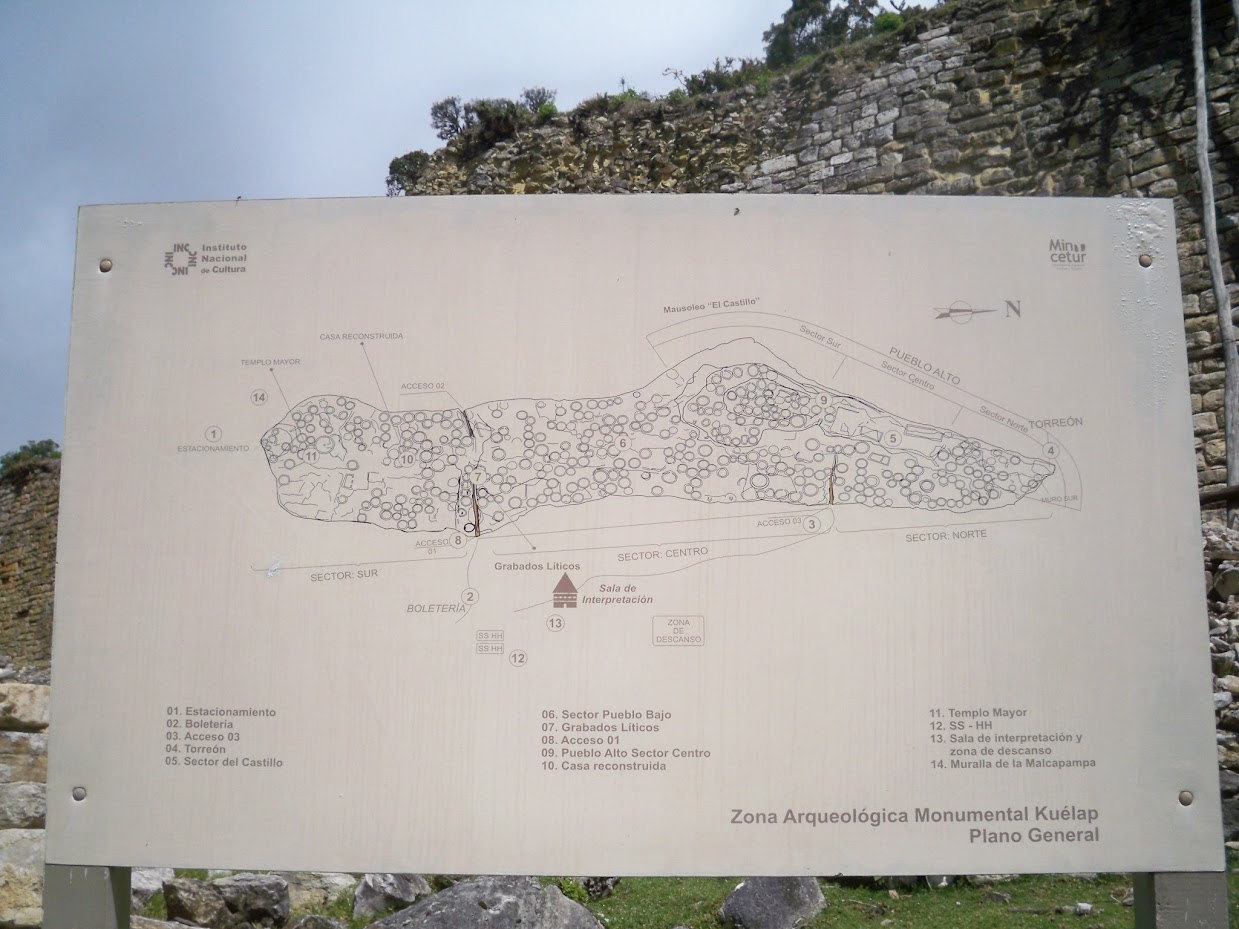 Remains found at the site include artifacts from coastal Ecuador, as well as items gathered through trade in the early days of the Spanish conquest. 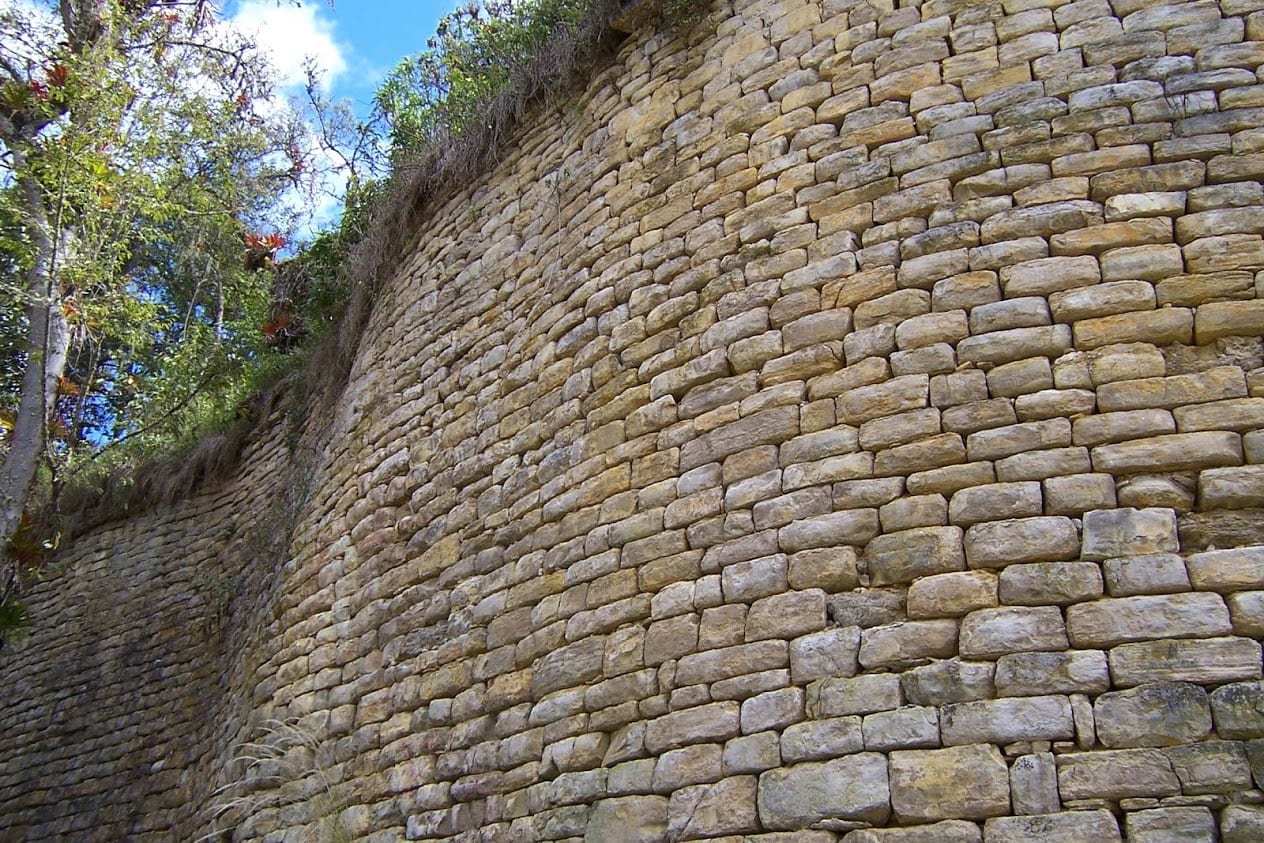 The most unique things about Kuelap are the 30 metre high defensive wall, and the circular stone huts inside. 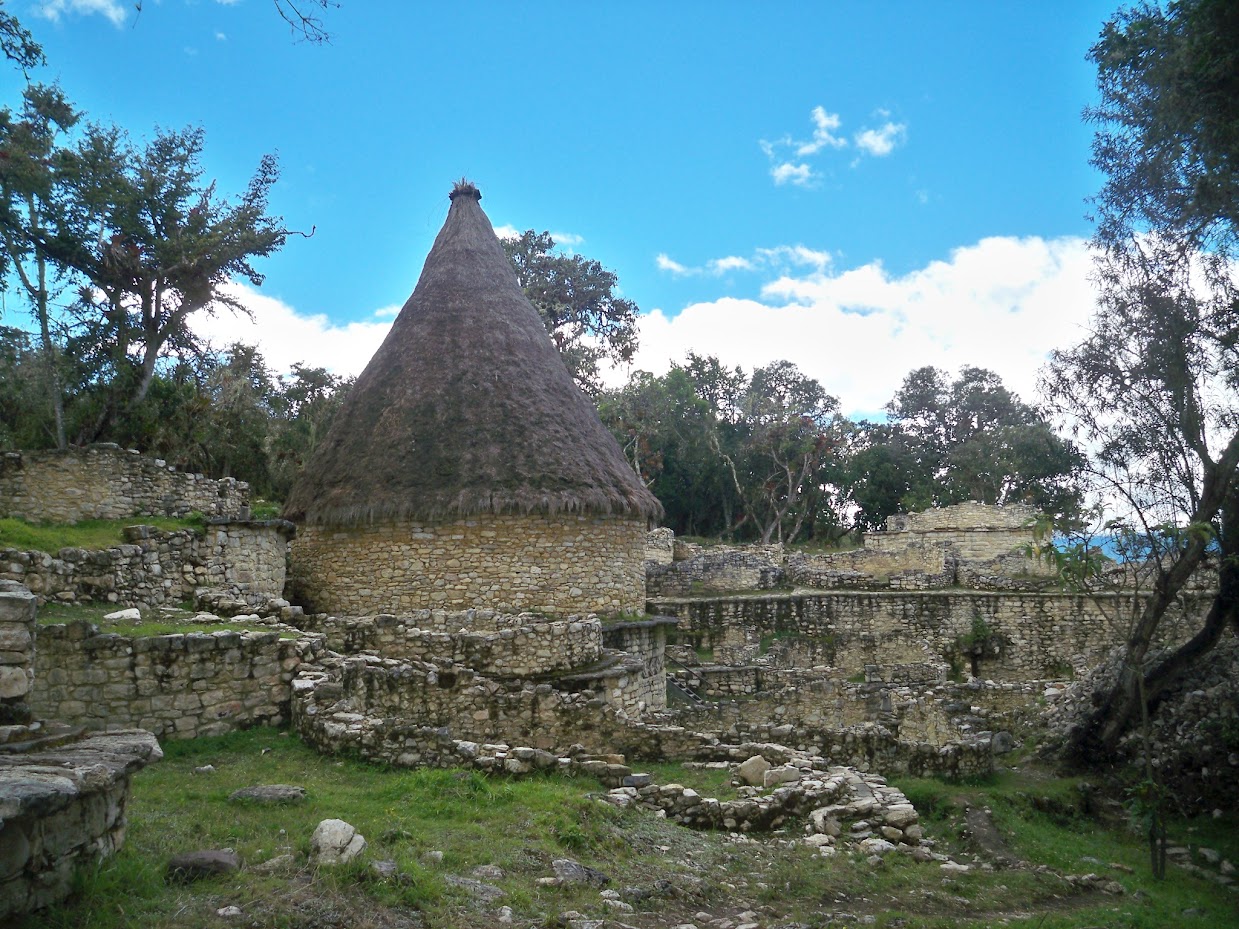 How the experts think a hut may have looked. There is, however, absolutely no evidence of a conical shaped roof, and certainly it is not seen in the rest of Peru. 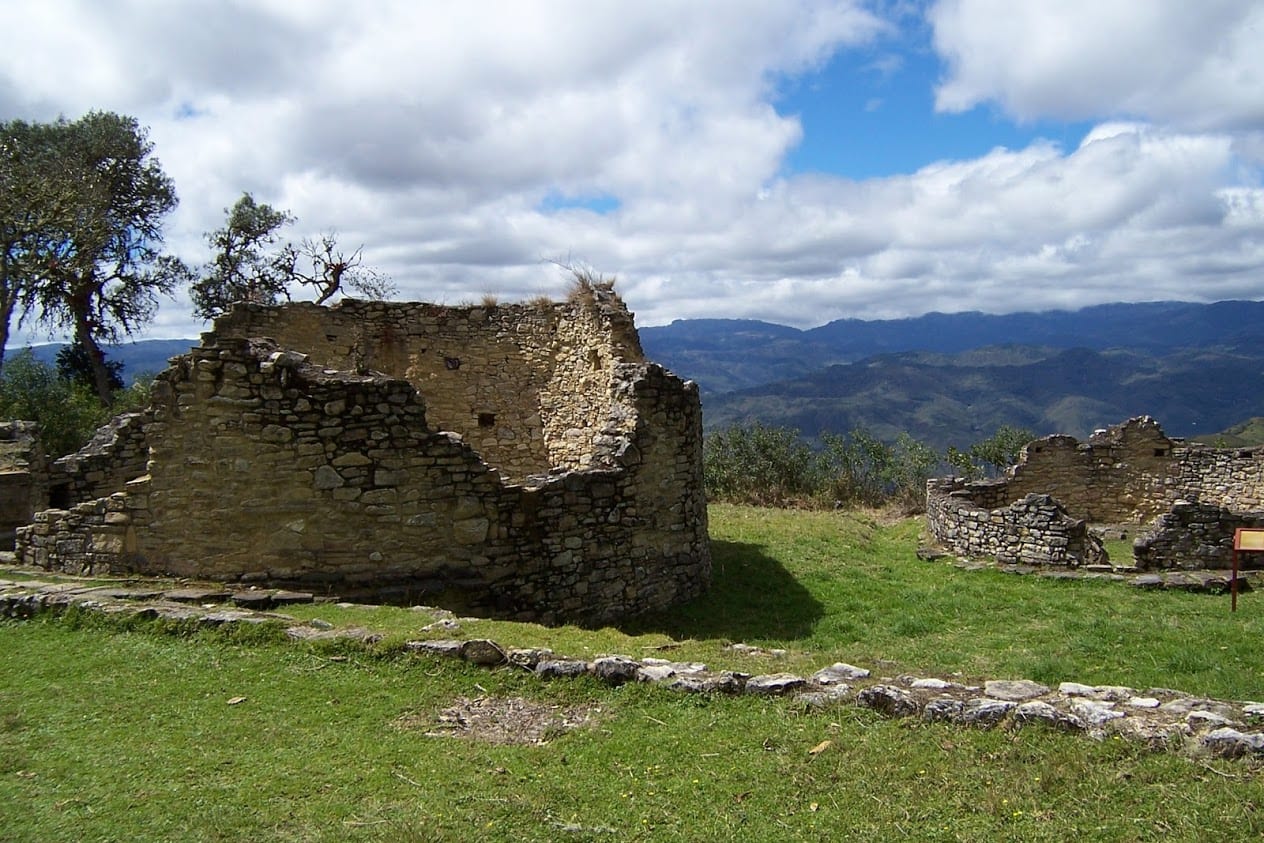 During its 200 years of construction, Kuelap is said to have used more stone than the Great Pyramids in Egypt. They were of more manageable size though! 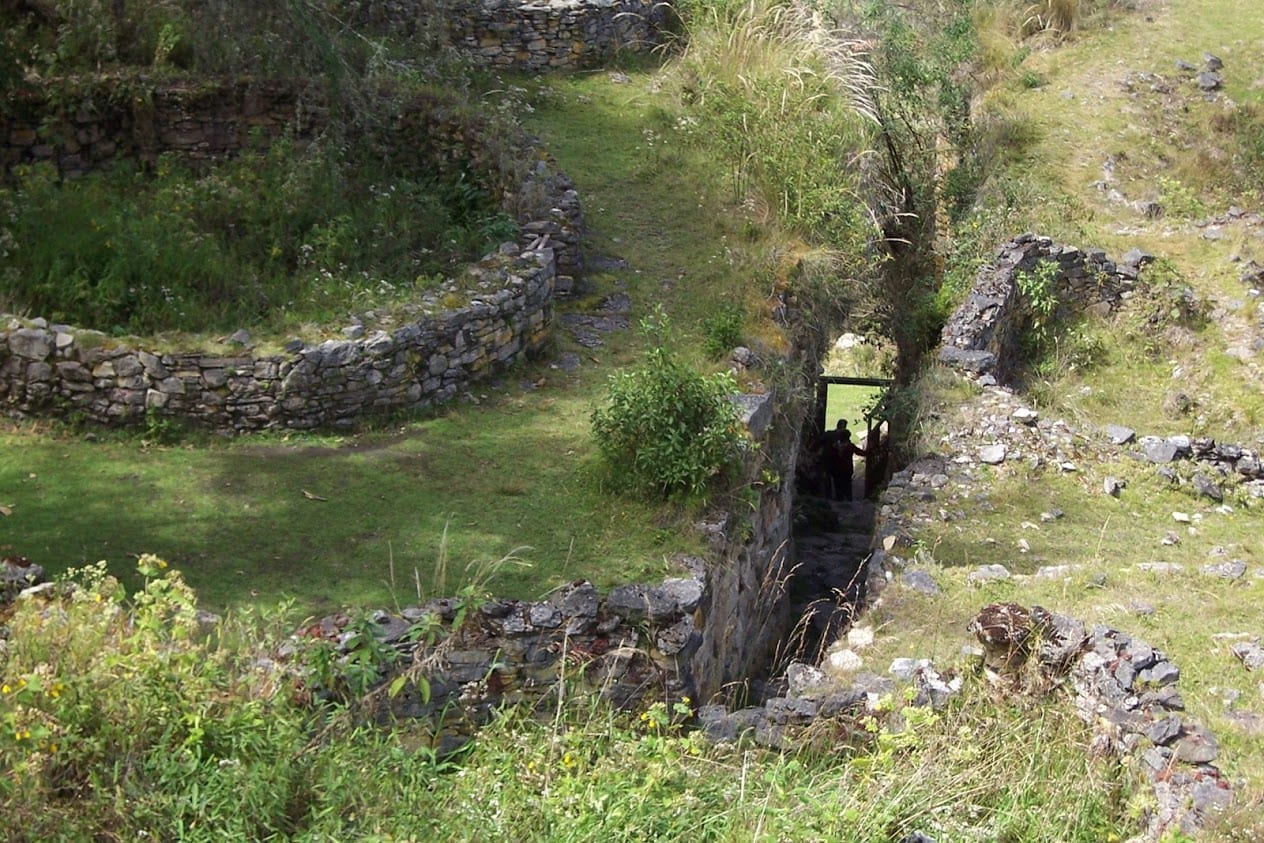 Although there is some reconstruction on the inside, such as some huts, most of the site, including the defensive wall, is original. 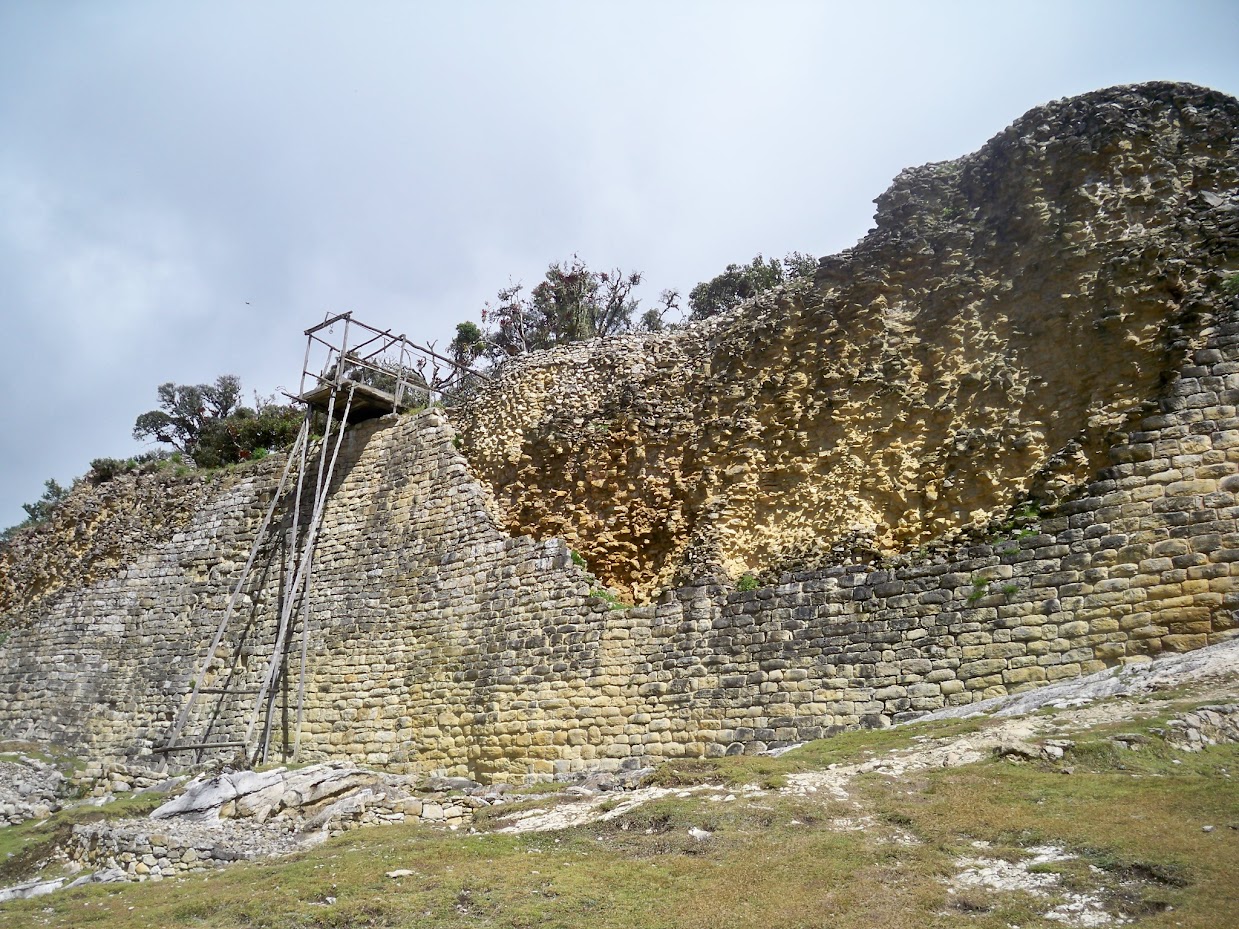 You can still see the patterns on the bottom of these hut foundations used to day in designs for sale around Peru. The foundations for most of the untouched and unreconstructed huts are little more than a couple of feet high. 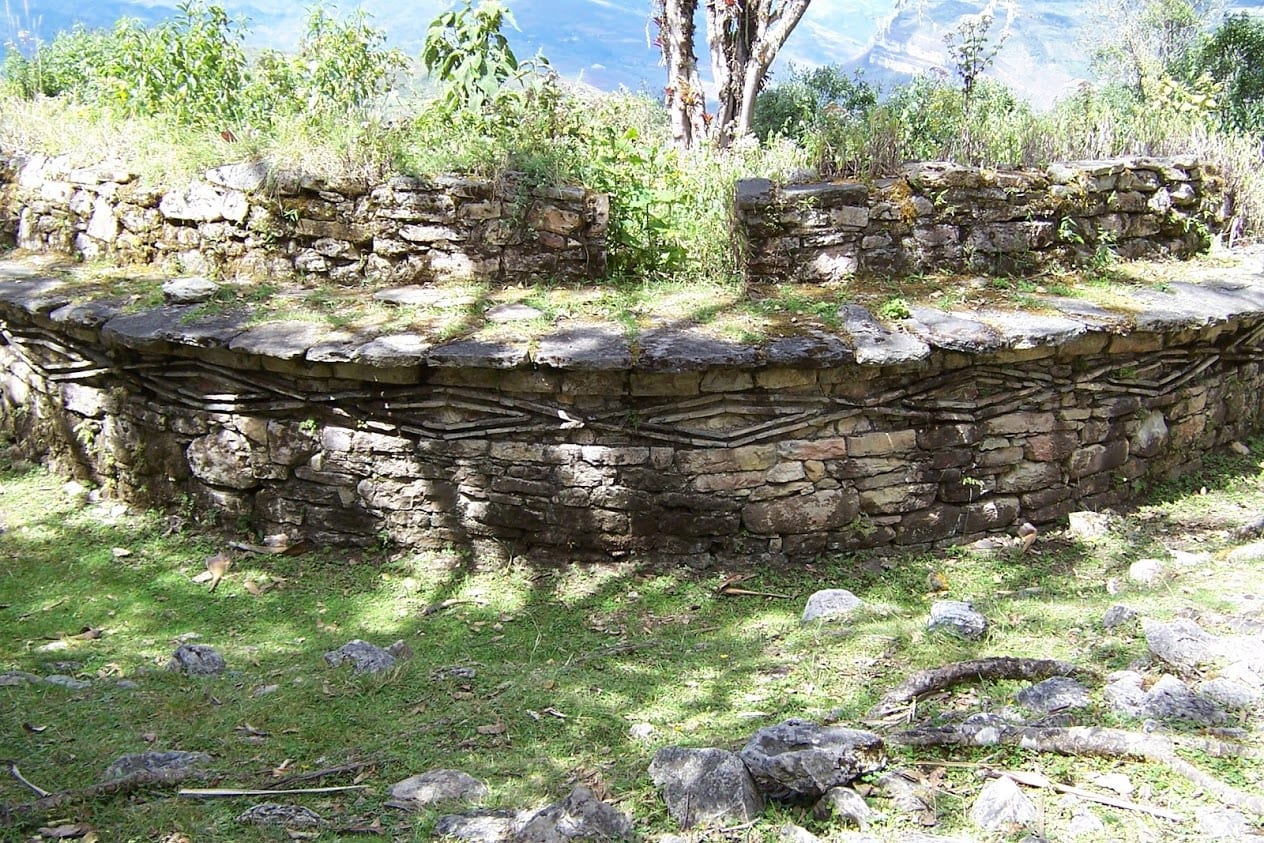 Another unique aspect of the Kuelap fortress is the entrances. In some way, these reminded me of Mycenaean fortress entrances from Greek sites such as Mycenae and Tiryns. 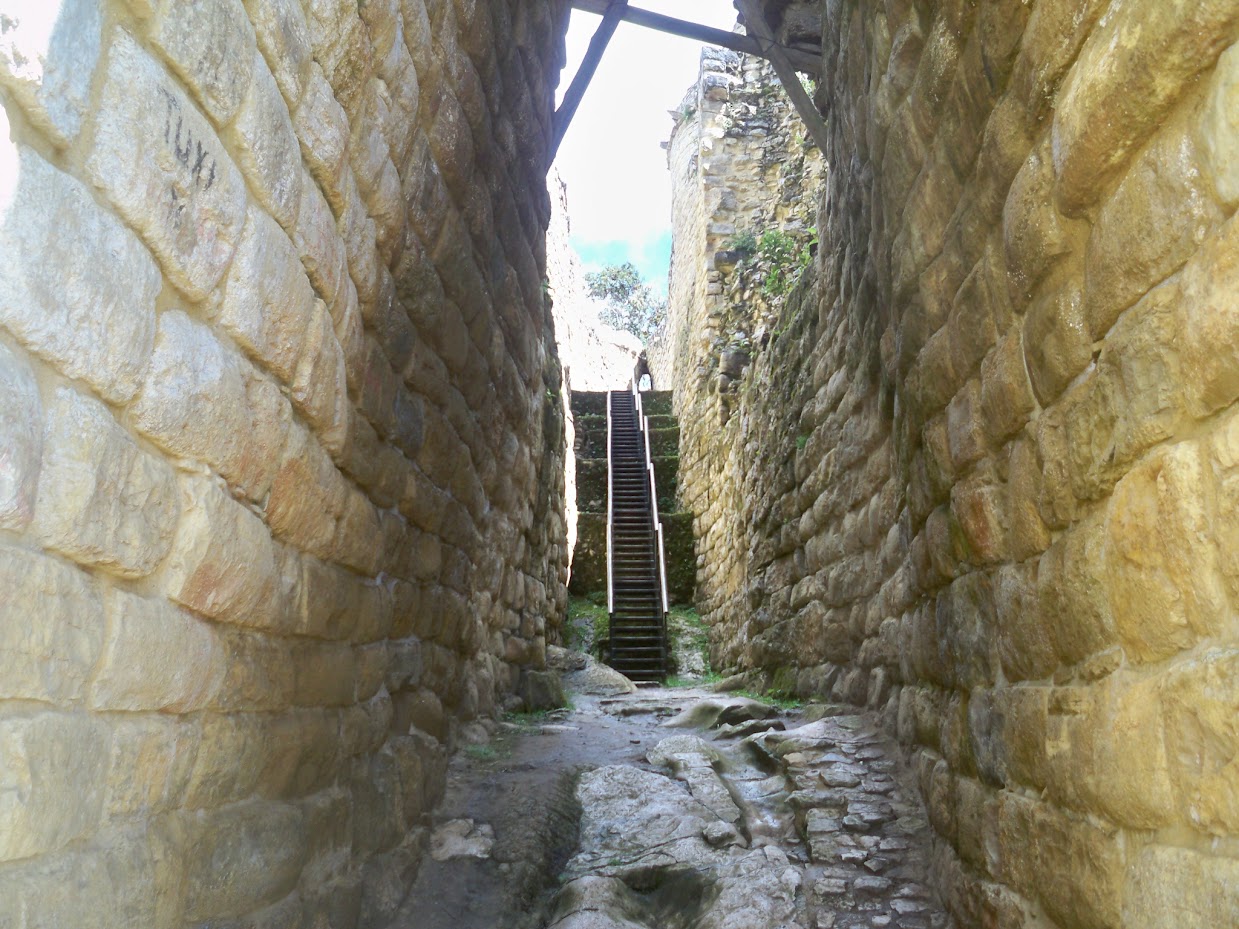 What to see at Kuelap

By visiting independently, you can take your time walking around the archaeological site of Kuelap.

This gives you plenty of opportunity to check out the different structures inside, admire those impressive walls, and contemplate just what civilization built this and why. 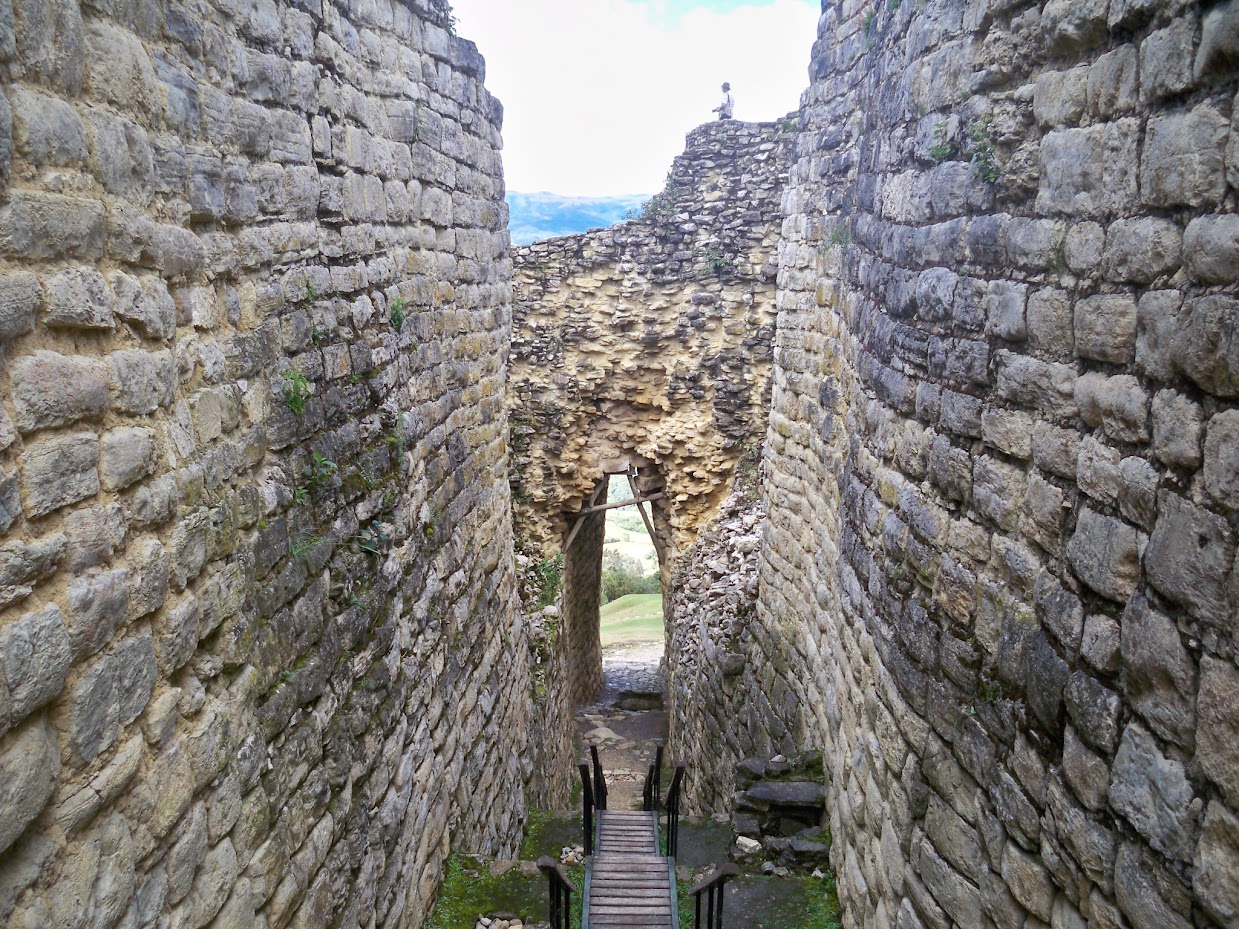 Hiking from Kuelap to Tingo Viejo

After a nice few hours of wandering around inside Kuelap, it was time to start hitting the trail back down to Tingo Viejo once more. I thought I would walk downhill faster, but in fact, it took me the same amount of time at 3 hours to hike the 10 kms. 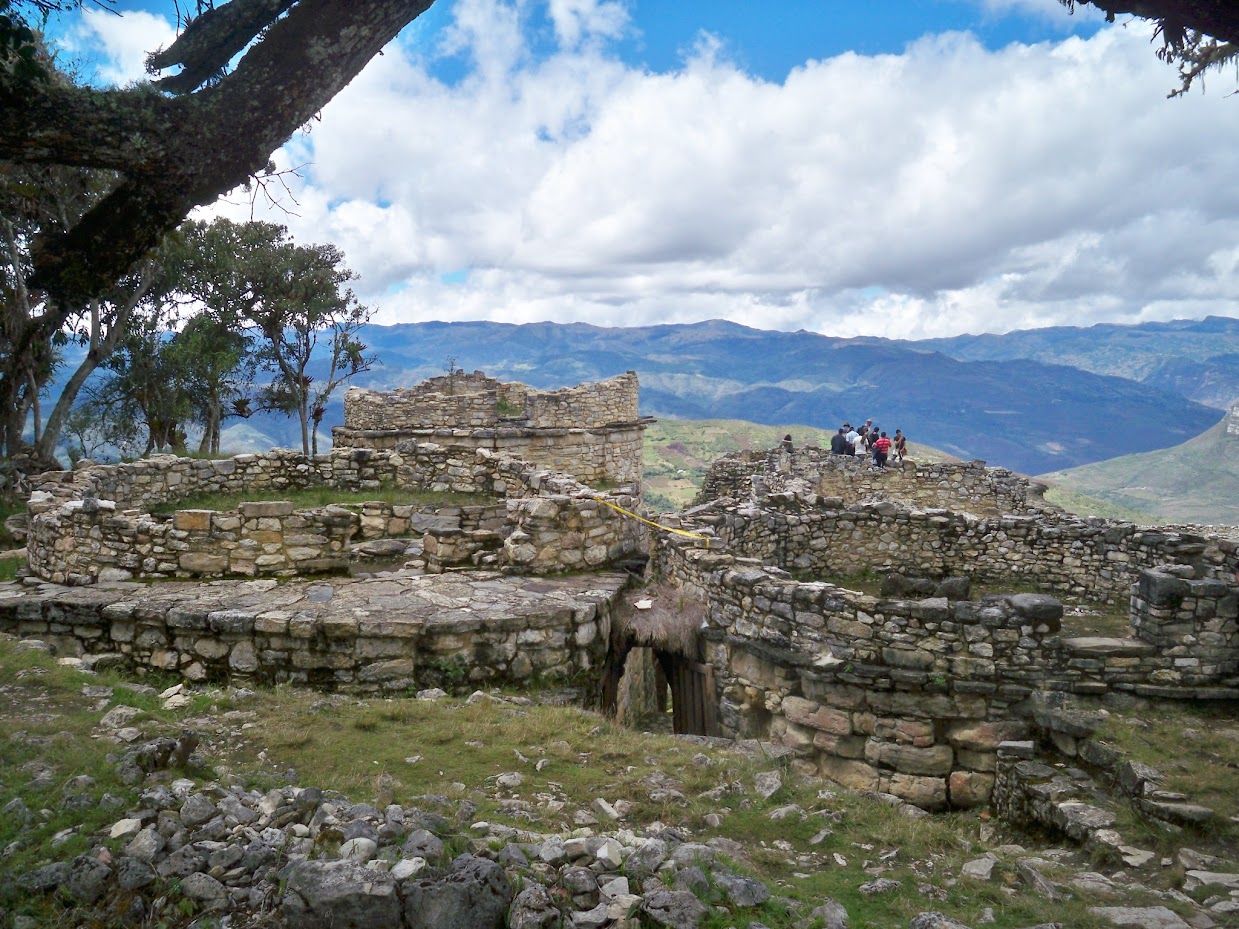 One close call when four horses came charging around a corner and down the narrow path towards me. Five minutes later I saw their owners, who judging by the cuts and bruises had just been thrown off them, split bags of rice and corn strewn across the trail.

If life wasn’t hard enough for these guys living at the top of a mountain with no vehicle access, it just became more difficult as they now had less to eat for the week.

Back at Tingo Viejo, it was time for a big feed and a couple of relaxing beers. The next day I would resume my bike tour, and continue ever southward! 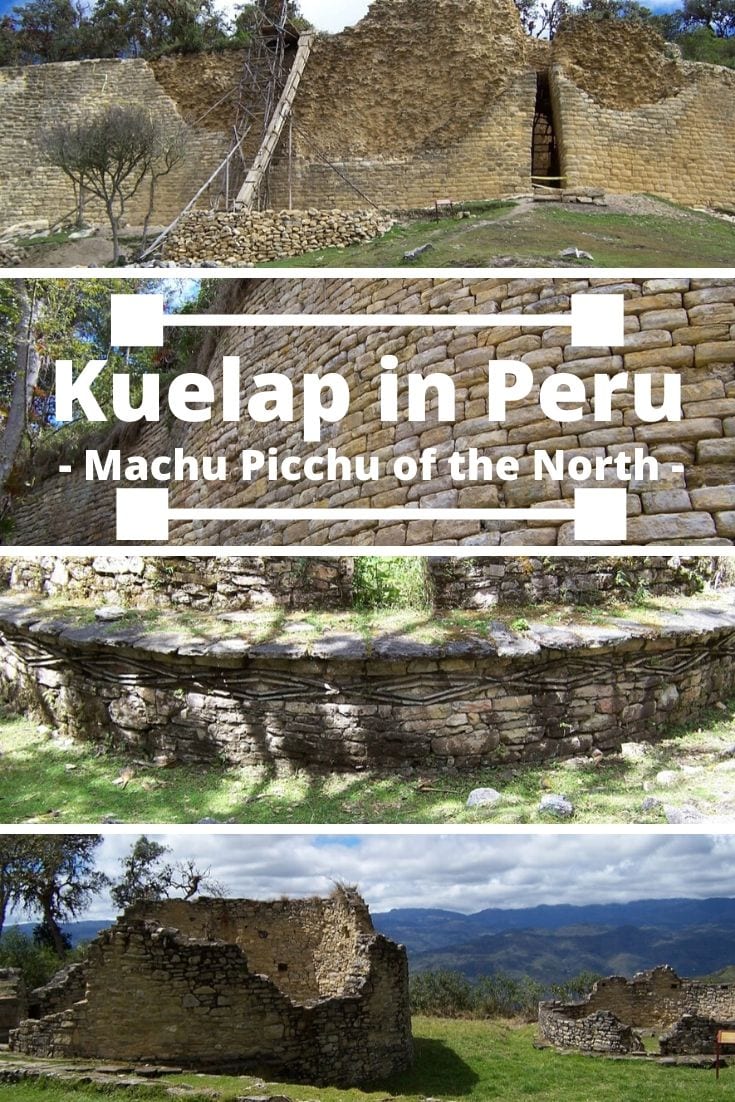 Readers planning to visit the Kuelap ruins in Northern Peru often have similar questions to ask about visiting this ancient city, such as:

How do you get to Kuelap Peru?

You can access Kuelap fortress via the town of El Tingo in the Utcubamba Valley. You can take a cable car ride or hike a trail to reach the Kuelap citadel.

What is Kuelap Peru?

Kuelap is one of the largest ancient monuments in South America, and was a fortified citadel thought to be the center of the Chachapoya civilization. These famous ruins are thought to date back to the 6th century.

What was Kuelap used for?

The Kuelap site is open to tourists every day between 8 AM and 6 PM; the final entry is at 4 PM, so you'll have ample time to explore the site.

Where is Kuelap in Northern Peru?

The Kuélap Fortress is an archaeological site in Peru's Amazonas Department, located along the border with Ecuador. It was erected by the Chachapoyas people more than 600 years ago on a ridge overlooking the Utcubamba River Valley.