Ecuador is a beautiful country to cycle in, but certainly challenging as I found out on this day's ride between Zamora and Loja.

An early start was in order, as I knew that today would turn out to be a long, tough one. So, out by 07.15 and the uphill work began. 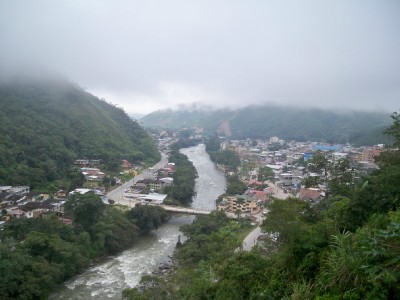 The road was paved for the most part to Loja, but there were quite a few sections of roadwork’s which made an already hard cycle even more challenging, laborious and mucky.

Faced with a day of over 2000 metres of ascent over a distance of 65 km is pretty daunting, especially when the combined weight of bicycle, trailer and luggage equals nearly my own body weight.

The key is in pacing, regular breaks, eating well and the carefully applied use of Slayer and Slipknot.

At about the halfway mark, luck also kicked in when the small village of Sabanilla had a couple of restaurants which meant that I could fuel up on rice and chicken before hitting the road again. 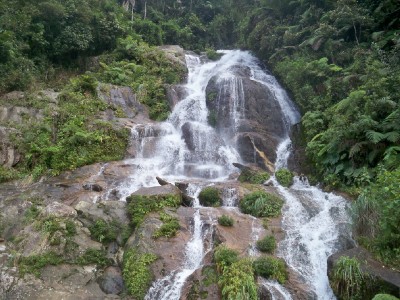 There were a few distractions along the way such as the waterfall pictured above.

The weather stayed good for me, which certainly helped, but the last hour or so of ascent was a bit of a struggle. 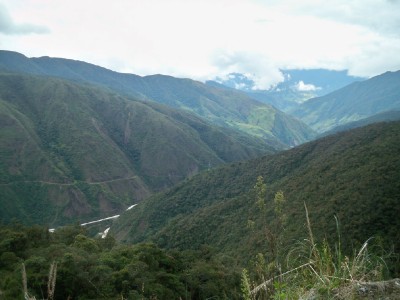 After peaking at about 2800 metres, the descent began into Loja, which would have been a lot more enjoyable if I hadn’t had to disconnect my rear breaks as they were so worn that metal was scraping on the rim when I used them.

This meant that I only had the front breaks, and after a while, these also became worn, whereupon I had to start using my feet cartoon style in an effort to stop some rather speedy descent.

With my feet still smoking, I arrived in the centre of Loja pretty tired, and booked into the first place I saw. At 11 dollars its more expensive than usual, but it does have a fridge in the room, which is handy for a little light refreshment.

Talking of which, the Dave Briggs Patented Muscle Relaxant of 4 ibuprofen and 3 beers needed to be brought into play in the evening. A day off tomorrow has been well earned !