The archaeological site of Ancient Nemea in Greece is often overlooked, yet is an incredibly interesting ancient site. Here's how to visit the Sanctuary of Zeus and Ancient Stadium in Nemea Greece. 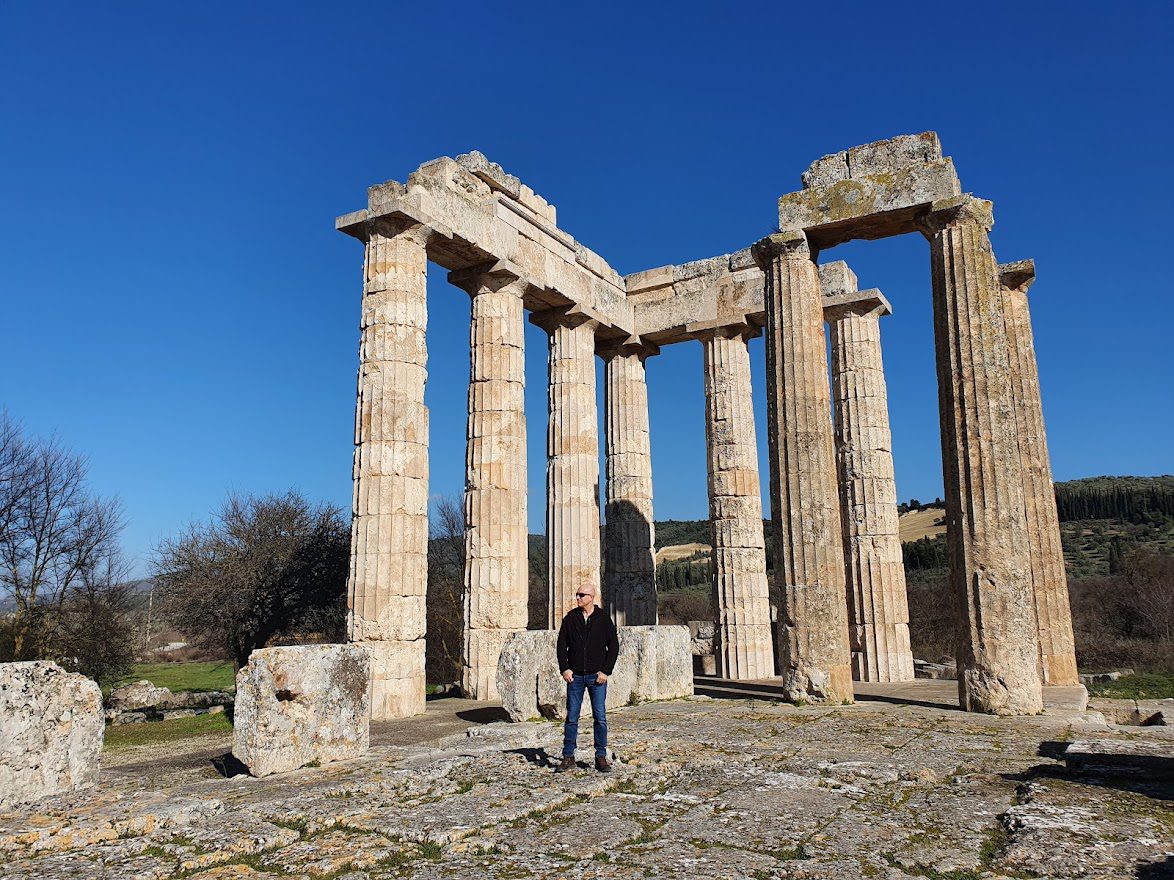 The ancient archaeological site in Nemea

Greece is full of ancient sites, spanning a history of several millennia. Many of these sites are located in the Peloponnese, a large region south of Athens.

One of the lesser visited sites in the Peloponnese is the archaeological site of Ancient Nemea. It consists of the Temple of Zeus, the adjacent archaeological museum, and the grand Stadium of Nemea.

The wonderful location of the area, in a small upland valley, among a sacred grove of cypress trees, made it ideal for the creation of a Panhellenic religious center.

Subsequently, a large stadium was constructed. Its purpose was to host one of the great panhellenic festivals, the so-called ancient Nemean Games.

Incidentally, the word ‘Nemea' derives from the ancient Greek word ‘nemos', meaning ‘pasture, meadow'. It was famous for the Nemean Lion, a fierce creature killed by the legendary hero Hercules.

Let's find out more about this wonderful ancient site, and how to visit.

The temple of Zeus in Ancient Nemea

The Temple of Zeus is the most impressive of the monuments in the archaeological site of Nemea. 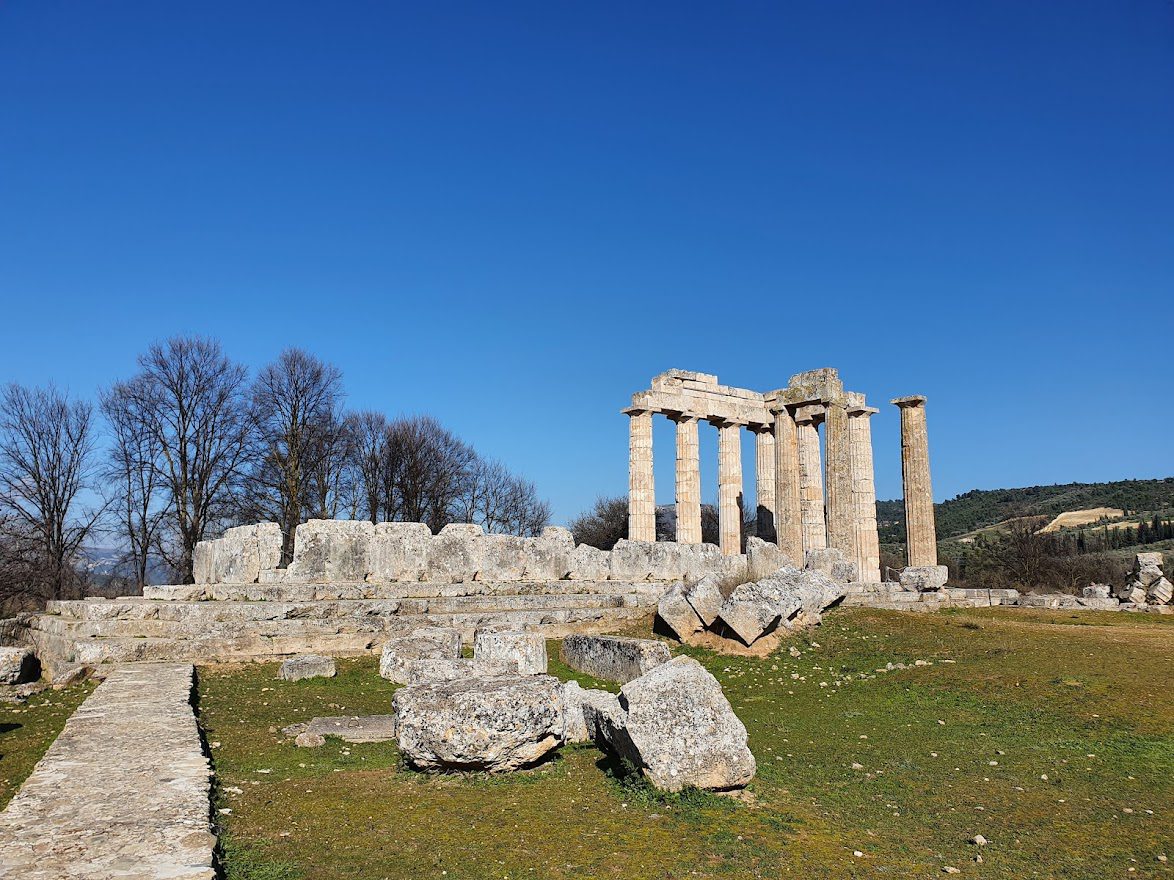 An early temple of Zeus was constructed in the 6th century BC. Soon after, the sanctuary started hosting athletic events, the so-called Ancient Nemean Games.

The temple was destroyed towards the end of the 5th century BC, at which point the Games were moved to the nearby city of Argos. When a temple was re erected around 330 BC, the athletic event returned to Nemea.

The new temple was one of the first constructions to combine the Doric, Ionic, and Corinthian architectural orders. During that time, more ancient buildings were constructed in the area, including the new Stadium, guest houses, baths, and a dining room.

A few decades later, in 271 BC, the Games were once again moved to Argos, and the sanctuary gradually fell into decline.

In the next centuries, materials taken from the sanctuary were used for other constructions in the area, including a Byzantine Basilica. The small village was abandoned around 580 AD. 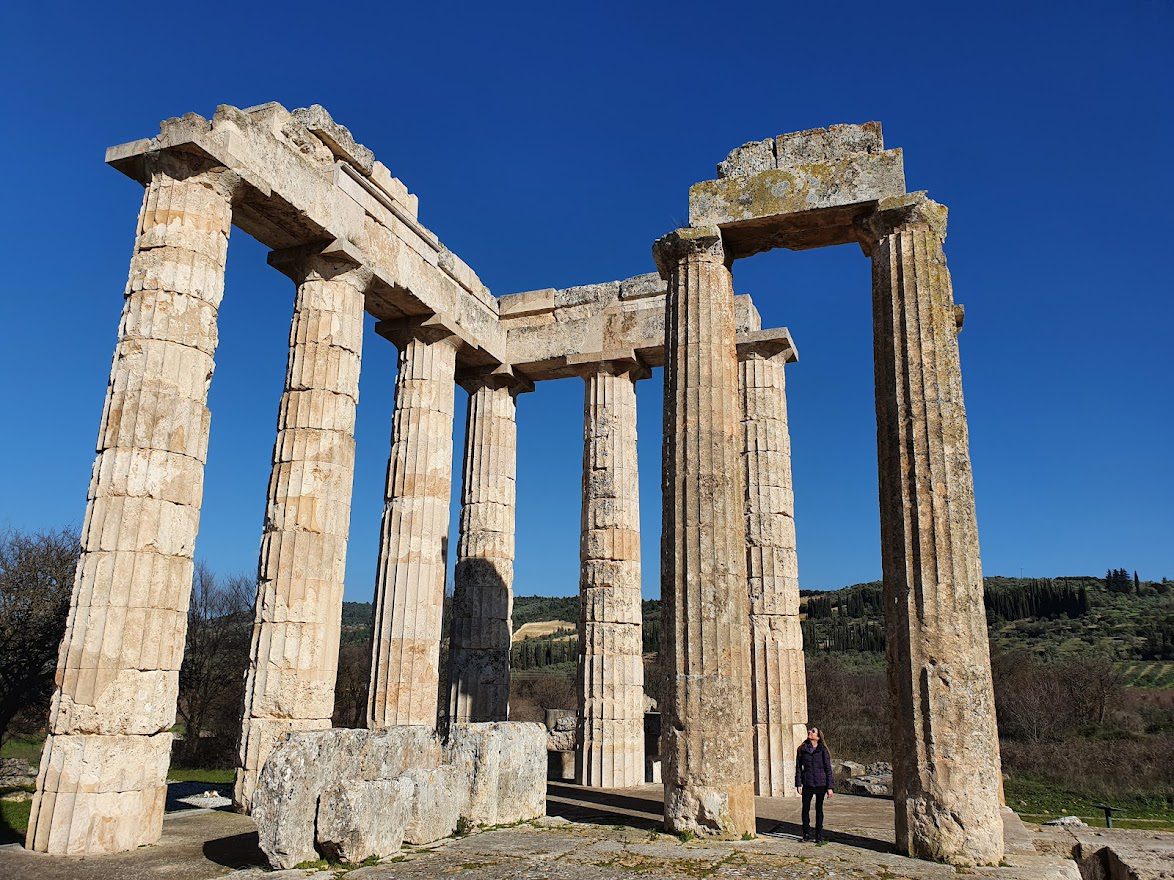 Restoration of the Temple of Zeus

The first excavations in the area took place in the 1820s, and were undertaken by the French. They were taken over by the American Classical School at Athens, who did restoration works in the 1920s and 1960s.

In the 1970s, Professor Stephen Miller of the University of California at Berkeley and his team of classical studies followed up. At the time, only three columns, out of the original 32, were still standing. Reconstruction works took several decades, and were finally completed in 2012, with six more columns having been restored.

Today, visitors can walk around and inside the temple, which is quite rare, as most ancient temples in Greece are off-limits. The columns are 13 m tall – definitely fit for the King of Ancient Greek Gods!

Close to the temple, you will see many more ruins, including the remains of a covered bath house.

The archaeological museum in Nemea

The small archaeological museum of Nemea is located within the immediate grounds of the Temple of Zeus. 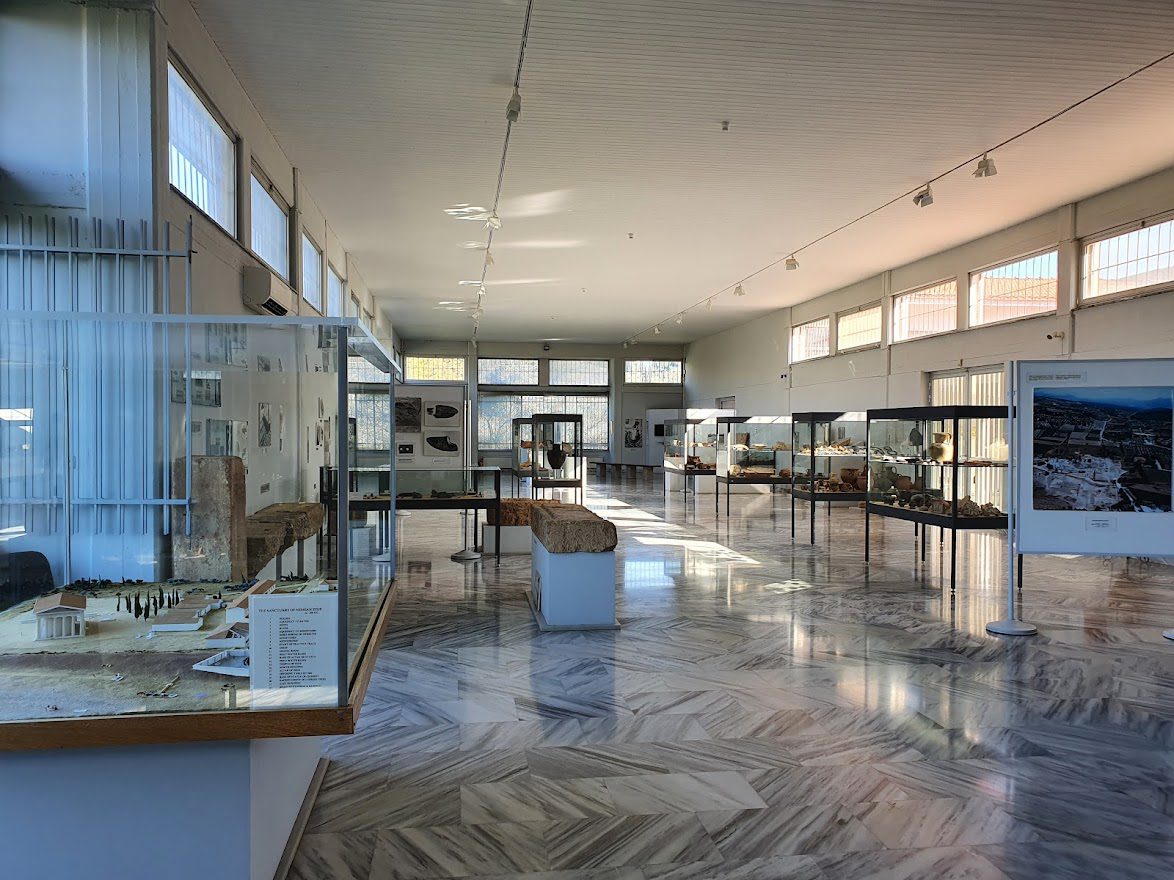 Its collections include ancient coins left behind by people traveling to Ancient Nemea, items representative of the Nemean Games, tools, and weapons.

Among the most important exhibits are jewels and pottery items from the Mycenaean necropolis at the nearby area of Aidonia. Some of those artefacts had been put up for auction at a private gallery in NYC, in 1983, but were returned to Greece in the mid-1990s.

Visitors will also see a few old pictures and drawings of Nemea from the last two centuries.

The Ancient Stadium in Nemea

A few hundred metres away from the Sanctuary of Zeus and museum, you can see the Ancient Stadium in Nemea. This is where the Panhellenic Nemean Games were held every two years.

The Stadium was constructed in 330 – 320 BC, at the time when the Sanctuary of Zeus was rebuilt. As very few stone seats have been unearthed, it appears that the audience mostly sat on the ground.

The track was around 180 m long. There was a stone starting line, where a mechanism was attached to ensure that all athletes started to run at the same time. 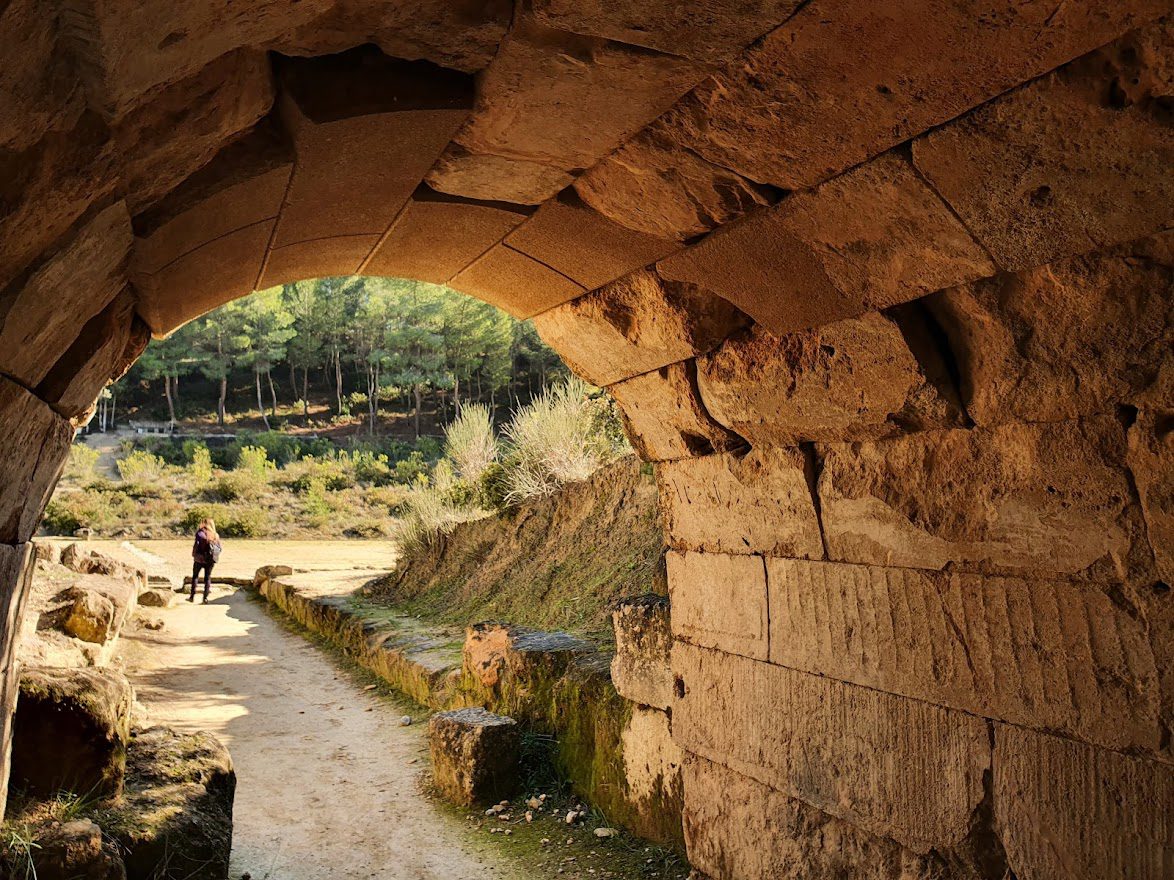 To enter the stadium, the athletes had to go through a barrel vaulted tunnel, which has been preserved.

People who visit today will walk through the exact same tunnel to reach the site. They can then wander around, and even climb up the hill behind the stadium, among the trees. 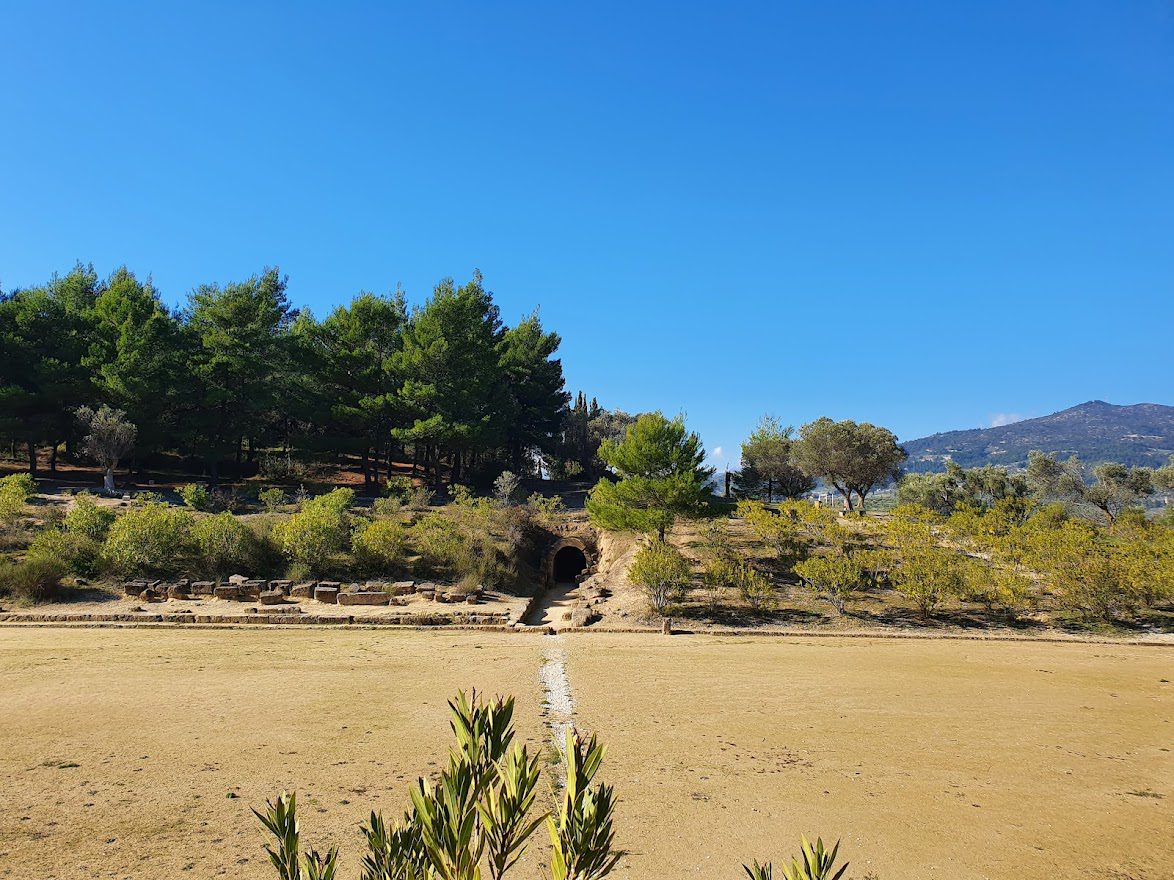 The Nemean Games were one of the four major athletic festivals in Ancient Greece. The other three were the Olympics in Ancient Olympia, the Isthmian Games near Corinth, and the Pythian Games in Ancient Delphi.

According to Greek mythology, the founder of the Games was Hercules, the hero who also freed the area of the fierce lion.

The Nemean Games were held every two years, to honour Zeus, the father of Gods. There were several track races, wrestling, boxing and horse racing. The winners in each competition were offered a wreath made out of wild celery. Why? Read my article covering fun facts of Ancient Greece to find out!

The Greek lyric poet, Pindar, wrote the eleven Nemean Odes to celebrate the victories of athletes in the Nemean Games.

In 1996, the Nemean Games were relaunched. Since then, the event is held every four years, to coincide with the Olympic Games.

How to visit Ancient Nemea

Ancient Nemea is only 110 kms away from Athens. It can be easily visited on a day trip from Athens, or combined with a few more attractions in the area.

While there are buses going from Athens to Nemea, the timetables are not always updated. It might be best to get in touch with the bus company to confirm. If you are happy to drive in Greece, the best way to visit Nemea is by rental car.

If you are interested in wine, you could combine your visit to Ancient Nemea with a tour of the fantastic wineries in the area. Some names to look out for are Palivou Estate, Gaia and Semeli Estate. 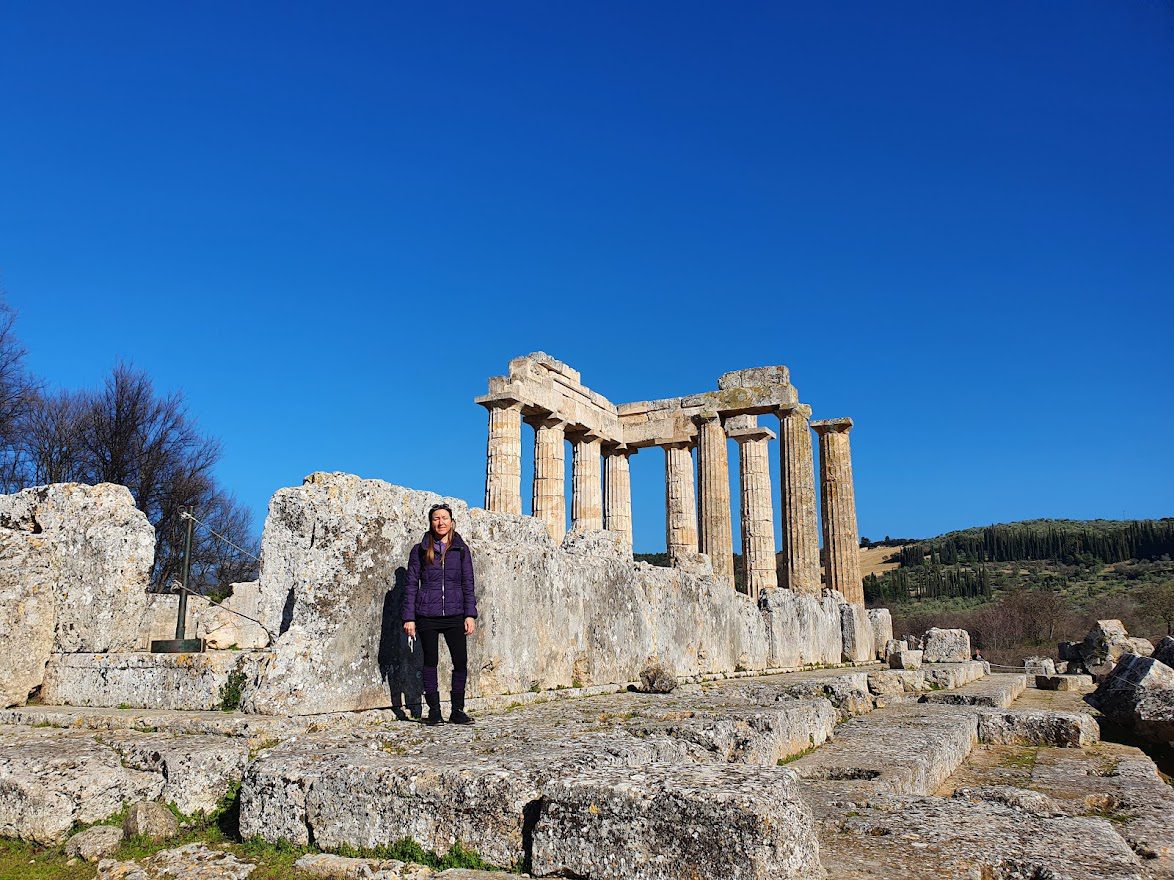 The Nemean lion was a mythological monster that lived in the region of Nemea. Its golden fur was said to be impenetrable to weapons, and its claws were sharper than humans' swords with the ability to cut through any armor.

The Nemean Lion plagued the district of Nemea in the Argolis. King Eurystheus instructed Herakles (Heracles) to kill the beast as the first of his twelve Labours. Hercules succeeded, skinning the Nemean Lion to make his cape. Many statues and images of Hercules show him wearing a Lion's cape and also part of a helmet.

Fun fact: I completed a three week bicycle tour in Greece based in the legend of Hercules and the 12 Labours. You can read about it here: The Labours of Hercules Bike Tour of the Peloponnese in Greece 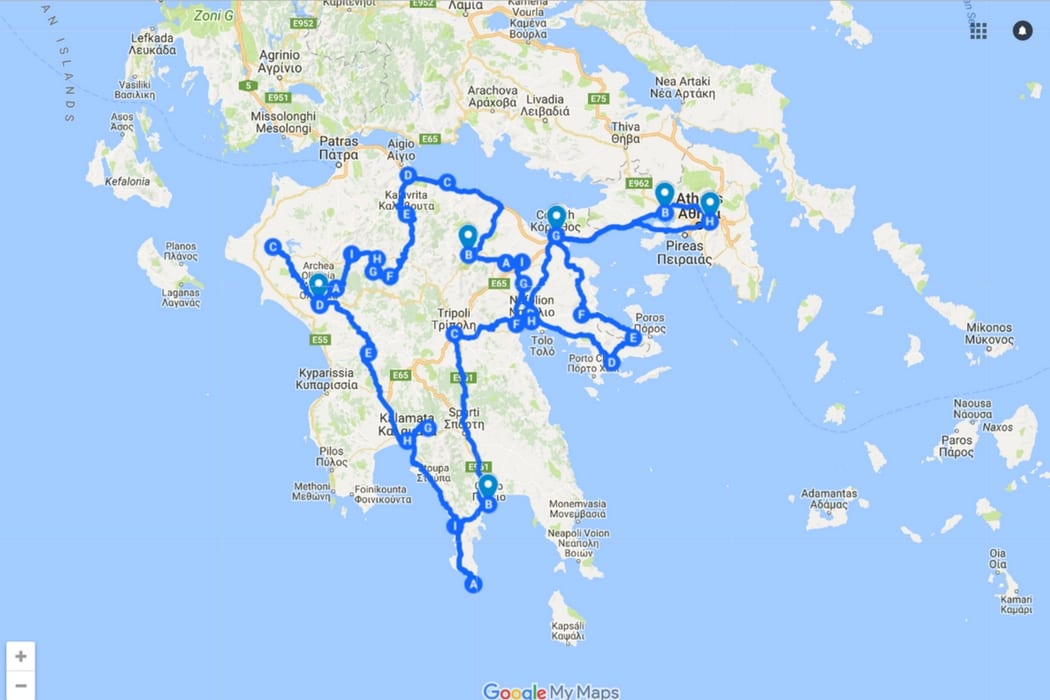 Other sites in the Peloponnese

The Peloponnese has, literally, tons of ancient sites. Three of the best known ones are Ancient Mycenae, Ancient Epidaurus, and Ancient Corinth. These are often included in organized day tours from Athens.

Ancient Olympia, the birthplace of the Ancient Olympic Games, is another popular attraction. The archaeological museum is one of my favourite museums in the whole of Greece.

Yet, there are many more ancient sites which often fly under the radar. These include Ancient Messene, the temple of Apollo Epicurius, Ancient Tiryns and Ancient Tegea, to name just a few.

Archaeology fans who have several days in the Peloponnese will be spoilt for choice!

Here are some questions about Ancient Nemea often asked by visitors:

Where is ancient Nemea?

Ancient Nemea is in the Peloponnese, 110 kms from Athens, 35 kms from the town of Nafplion, and 18 kms from Ancient Mycenae.

What was Nemea known for?

In Greek mythology, Nemea the home of the Nemean Lion, which was killed by Heracles / Hercules, the mythical hero.

What is the meaning of Nemea?

Is Nemea worth visiting?

Ancient Nemea is absolutely worth visiting. The ruins of the temple of Zeus are impressive, and the small museum is very interesting.

How do you pronounce Nemea?

In Greek, the word ‘Nemea' is pronounced neh-MEH-ah. 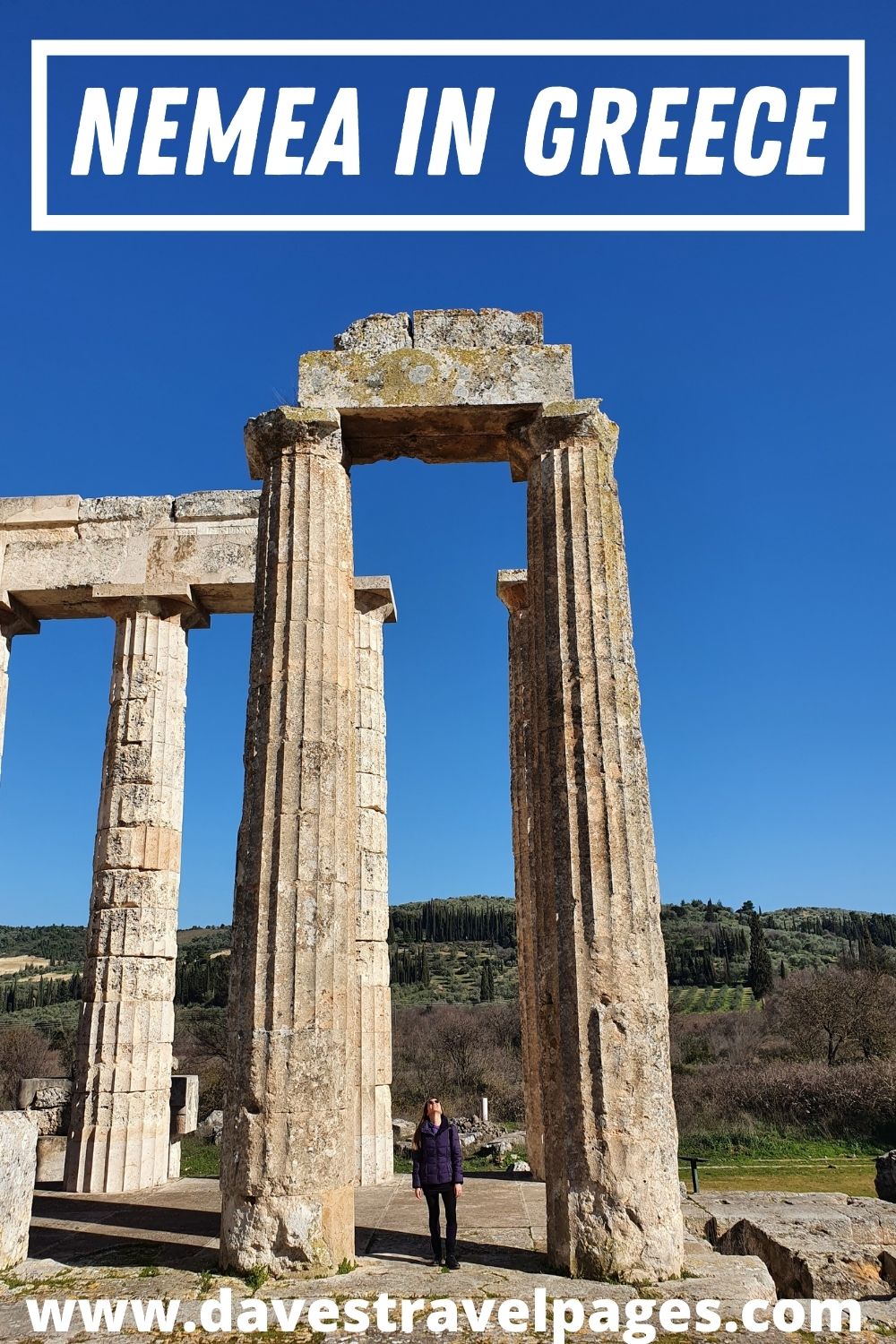 – Dave Briggs
Dave is a travel writer living in and writing about Greece. In addition to creating this travel guide about how to visit the ancient site of Nemea in the Peloponnese of Greece , Dave has also created countless other blog posts about destinations and things to see and do in Greece. Follow him on social media for travel inspiration from Greece and beyond: