This blog post covers cycling from Springbok to Cape Town in South Africa. This was the last leg of my cycle tour from England to Africa. At this point, my bike was falling to pieces, funds were low, but my spirits were high. The end was finally in sight!

At last, the final leg of my 10 month bicycle tour from England to South Africa. The finish line was not far away, but there were still a few kilometres left to cycle.

It felt quite nice to have a lay in for a change and not really have to do anything. After breakfast, I went to an internet place (extortionately expensive), and bought two new pairs of socks and a pair of boxer shorts.

The state of the two pairs of boxers that I've had since the start of my trip 10 months ago is quite remarkable, and I'm unsure whether to bin them or donate them to a modern art gallery. Spent the rest of the day vegging. It's a hard life.

I was going to give the bike a service today, but the more I looked at it, the more I could see things that I didn't like – Spokes bent, frayed wires, wheels not going around properly.

It's only got 550 kms to go, so I just cleaned the chain a little and left the rest alone. Crossing my fingers is probably going to be more effective than tinkering with it at this stage.

Just a veg day of doing nothing. I'm looking forwards to starting off again tomorrow and reaching the end of my journey. 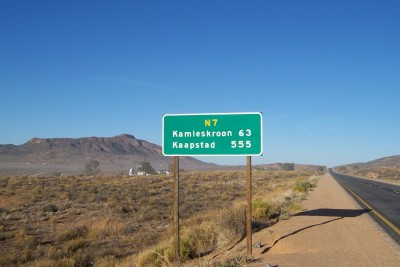 This is my first sighting of a signpost for Cape Town since leaving England on the bicycle nearly ten months ago – Not far to go now!

Back on the bike again for this last section of cycling to Cape Town. I rode through some quite stunning mountains during what was a short day of only 70 kms.

In Kamieskroon I found a cheapish guest house, and spent an hour or so trying to true my rear wheel. It goes around marginally better now, but the rim and spokes definitely need replacing.

In fact, so does the chain, cassette, hubs, bicycle saddle, tyres and cables as well. A big rebuild could be in order when I get it back to England!

I've decided to split the rest of my journey to Cape Town into shorter days for several reasons – To relax and wind down a little, to have plenty of time to maintain the rear wheel, and because I have some time until I have to return to England.

As a consequence, I only had 50 kms to cover today to the town of Garies, and had a pit stop halfway to play with the spokes on my rear wheel again. All they've got to do is hold together for another 400 kms or so – PLEASE!!

I cycled into Garies at about midday, and the first place I tried was full. The drunk, crazy owner suggested somewhere to try, but to avoid the caravan park as ‘they will rob you there'.

The South Africans are all really petrified about crime, and always say of the next town on my list –  ‘Be careful there, there is a lot of crime'.

When I say that I have cycled from England, and the countries which I have passed through, the first question they always ask is ‘Did you have any problems with the crime?'. I feel sad for them, trapped in a prison of their own fear.

Today's little section of 65 kms was extremely hilly all throughout, and it would have been quite tough to do it as part of a longer day. Actually, I'm enjoying these short days of cycling – it's a good way of winding down towards the end of the trip.

It was really windy last night, and it was still giving it some this morning, so I was in two minds whether to set off or not.

I'm glad that I did though, because the wind was blowing the right way, and of the three and a half hours it took me to cover the 90 kms to Vanrhynsdorp, I only had to pedal for half an hour. I picked up a bargain hotel room for 100 Rand, and I hired a couple of DVD's to watch in the afternoon.

Looking in the map book given to me by Mr. Mullet in Palapye, I am now on the final page (6), and have 300 kms left to Cape Town. I've been thinking about at exactly what point I say that I have cycled to Cape Town – Do I finish at Table Mountain, Cape Point or what?

I've decided that as soon as I see the ‘Welcome to Cape Town' sign I've done it though!

Today was one of the hardest days of the trip. Unlike yesterday, the wind and mountains were not in my favour. There were no flat sections, and any downhill parts were strategically placed so that I was going directly into a headwind and had to pedal just as hard as if I was going up. And the uphill sections were insanely steep. Of course, if my rear wheel went around properly, it might have been a little easier.

As I changed it, I noticed that not only was the sidewall splitting, but that the tyre is now so thin as to be almost see through. That can't be good. I considered putting the spare tyre on, but its been folded up for so long that I seriously doubt it would resemble anything approaching round when unpacked. Saying that, it might fit my misshaped rear wheel like a glove. 220 kms to Cape Town remain.

Today's 60 kms passed through very picturesque fruit growing valleys, so there was more mountain work, but thankfully the wind was minimal. I took a break halfway through the journey at one of the regular picnic tables to spend an hour sorting out the spokes on the rear wheel again. 160 kms to Cape Town. 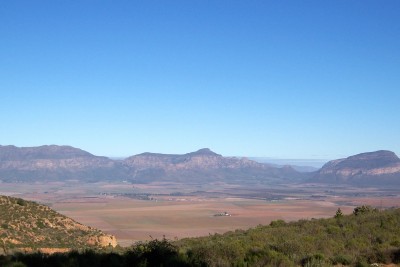 The first hour was all uphill as I ascended a mountain, but the views from the top were simply amazing. It was only a short day to Piketberg, as I decided to split the rest of my journey so that I arrive in Cape Town on Saturday, when hopefully the traffic will be lighter.

I used the internet in the afternoon – Assuming I can get a flight back in time, I may fly back to England on the 25th of May, and start back at work on the 28th. 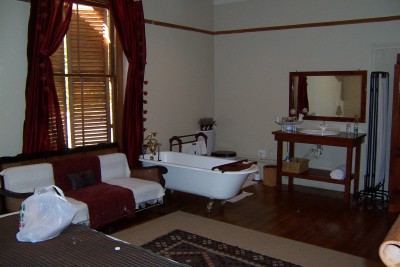 There was quite heavy fog first thing in the morning, and lots more hill work to do. My legs are feeling quite tired, but its the last day tomorrow, and only 70 kms to go to Cape Town!!

(I've stayed in thousands of hotel rooms over the years, and so its not often that I get excited by them, but this one is so cool!! I can watch TV from the bath – Perfect!)

I made the most of the day though, and finally booked my flight back to England leaving on the 25th of May and landing on the 26th.

Going back to England – It's been such a long time now, and the thought is almost as exciting as finishing this trip! The weather is supposed to be pretty miserable tomorrow, so I'll stay here one more night, and then move on to Cape Town on Monday.

So, another day off. Not a lot to do but veg out, have a long bath and watch TV. I'll be back at work soon, so I have to make the most of it!

After a big breakfast, I finally hit the road for the last time! The weather wasn't exactly good, but at least it wasn't as bad as it had been over the weekend. According to the news, a fair bit of damage had been done in Cape Town by the winds and rain then. There was no real wind today, but pretty regular spells of rain accompanied me all the way, and it was quite cold. Not to worry though – It was my last time of cycling on this trip!!

(And so now, its over. I'd just like to thank everybody whose kept in touch with me as I've cycled, the people I've met on the road, and especially the folks back home for the loan which meant that I could finish the trip!).