Is the Wear Graphene Gamma jacket the ultimate all climate jacket for outdoor adventures? I've tested it out, and here are my thoughts. 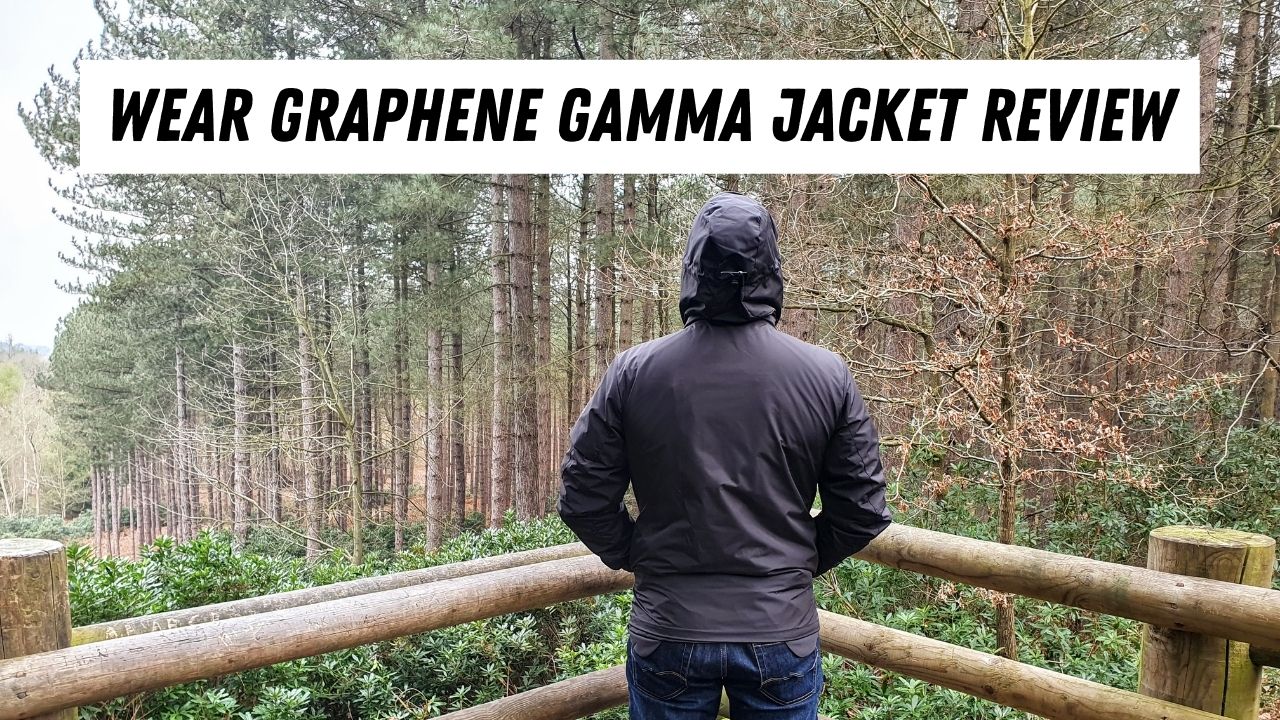 When I was contacted by Wear Graphene to review one of their jackets, I jumped at the chance. Incorporating the ‘wonder material' graphene, the Gamma jacket is billed as being an all season jacket for outdoor adventures – a heated jacket that is also waterproof, chill-proof, anti-odor, thermoregulating, breathable, thin and light.

You can check out the jacket here: Wear Graphene Jacket Use discount code DTP10 for 10% off!!

The spiel certainly seemed to indicate that it ticked a lot of boxes in what I would be looking for in an everyday jacket suitable for year round use in different weathers. It sounded like it would be an ideal lightweight jacket to take on a bike tour! But was it too good to be true?

Unfortunately, yes it was. It's not to say that it's terrible – Just that I felt the Gamma jacket didn't match up to the expectations their website had built up. This review takes a look at my experiences with the Gamma heated jacket, and why I thought it didn't live up to the hype.

Note: Not a paid review! 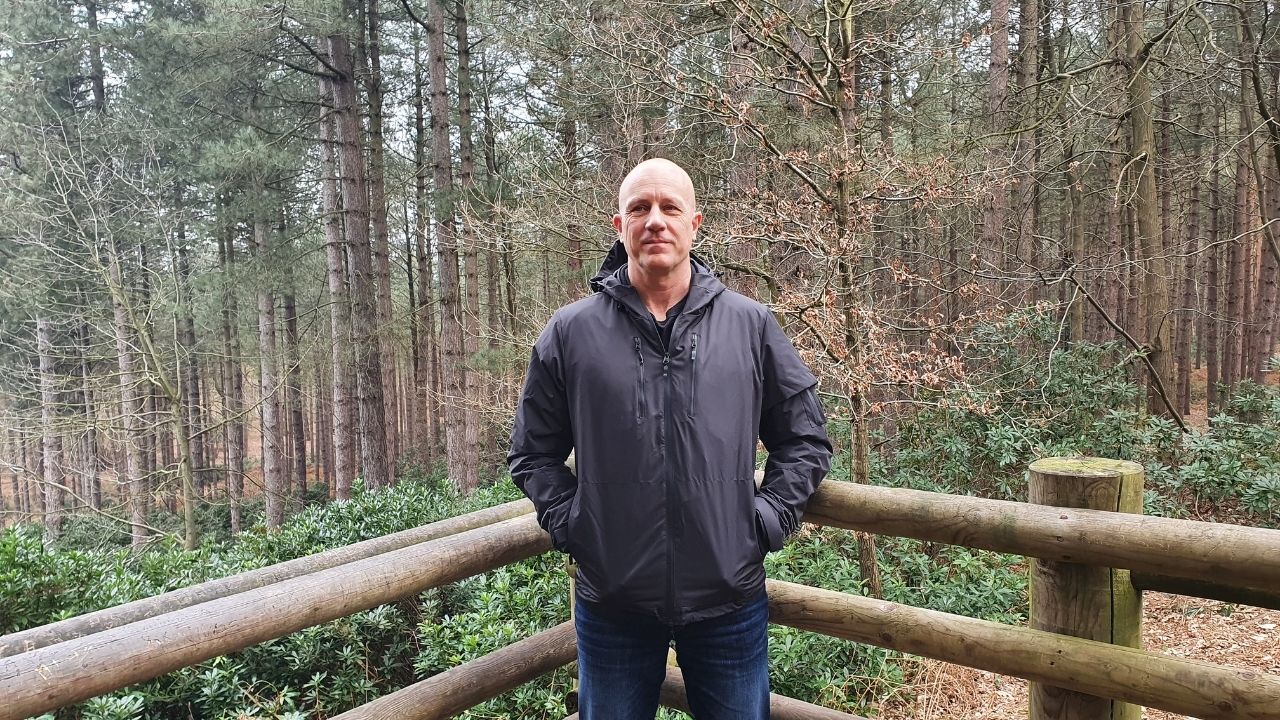 My first impressions on receiving the Gamma jacket was that it was well designed and made. So often, you get dangling threads from poor finishing on outdoor clothes, but this was not the case with the Gamma.

Additionally, I was amazed by the amount of pockets! Every time I turned the jacket over I seemed to find another one. There's ten of them apparently, some visible and other hidden pockets. All the pocket zippers were weatherproofed which was a good sign.

The hood was good as well. When not in use, you can neatly tuck it down the inside of the jacket if you wish, or roll it down to the neck.

The jacket also came with a little booklet. I've never needed a booklet for a jacket before, but on the other hand, I've not tried a jacket with a built in heater before either!

On reading the booklet though, the first seeds of doubt about the jacket started to be sewn. 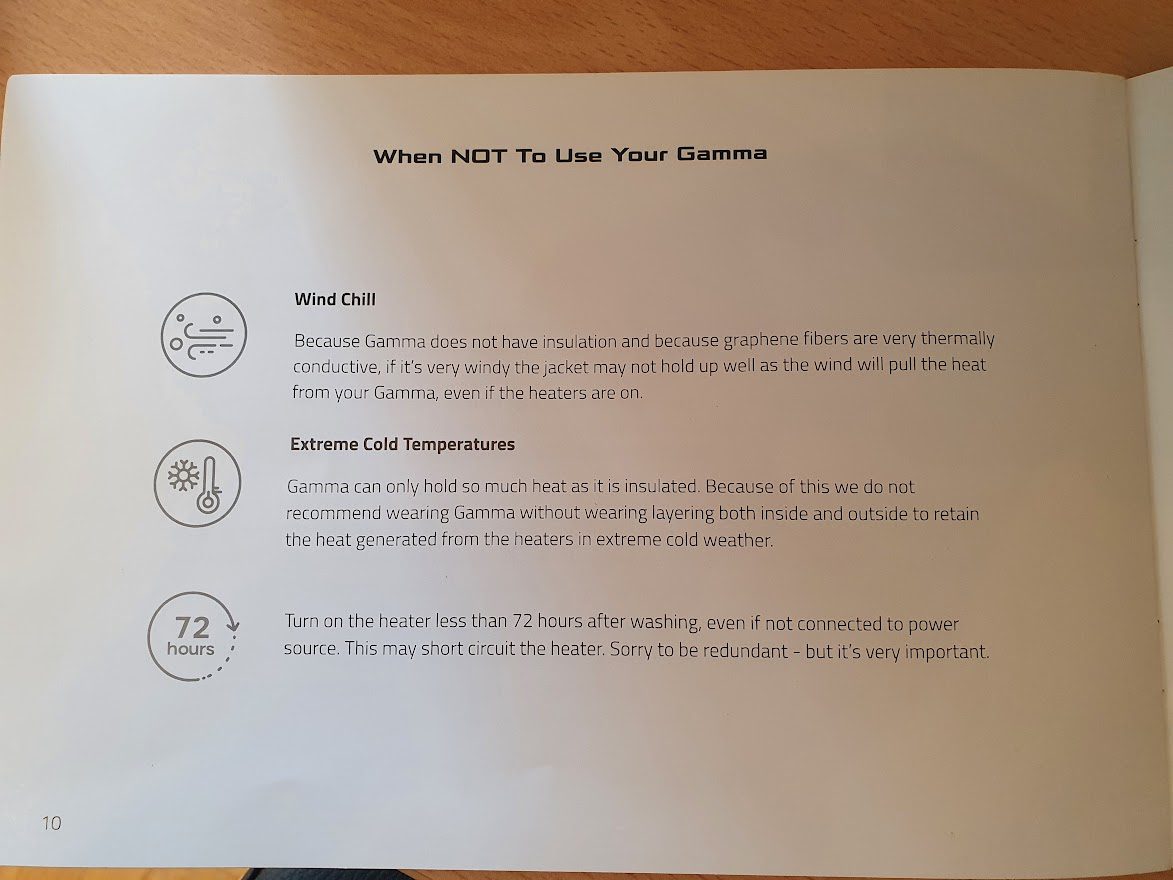 When NOT to wear your Gamma

Now, this is not what the website says at all! If I had bought this jacket, I would have been very annoyed. It even goes so far to say that you should wear layering both inside AND outside the jacket in extreme cold weather.

Now of course, no serious outdoors person was ever going to wear just this jacket in extreme weather conditions, but the initial marketing would have you believe otherwise. I can see less astute urbanites being led to believe this one jacket would do it all, and maybe regretting it if the weather turned foul.

My experiences wearing the Gamma in chilly weather

Due to the time of year I received the jacket (March and in the UK), I couldn't test it in extremely challenging conditions like sub zero temperatures. The best I could manage were a few cold days in Hunstanton (which to be fair, can be challenging at times!). 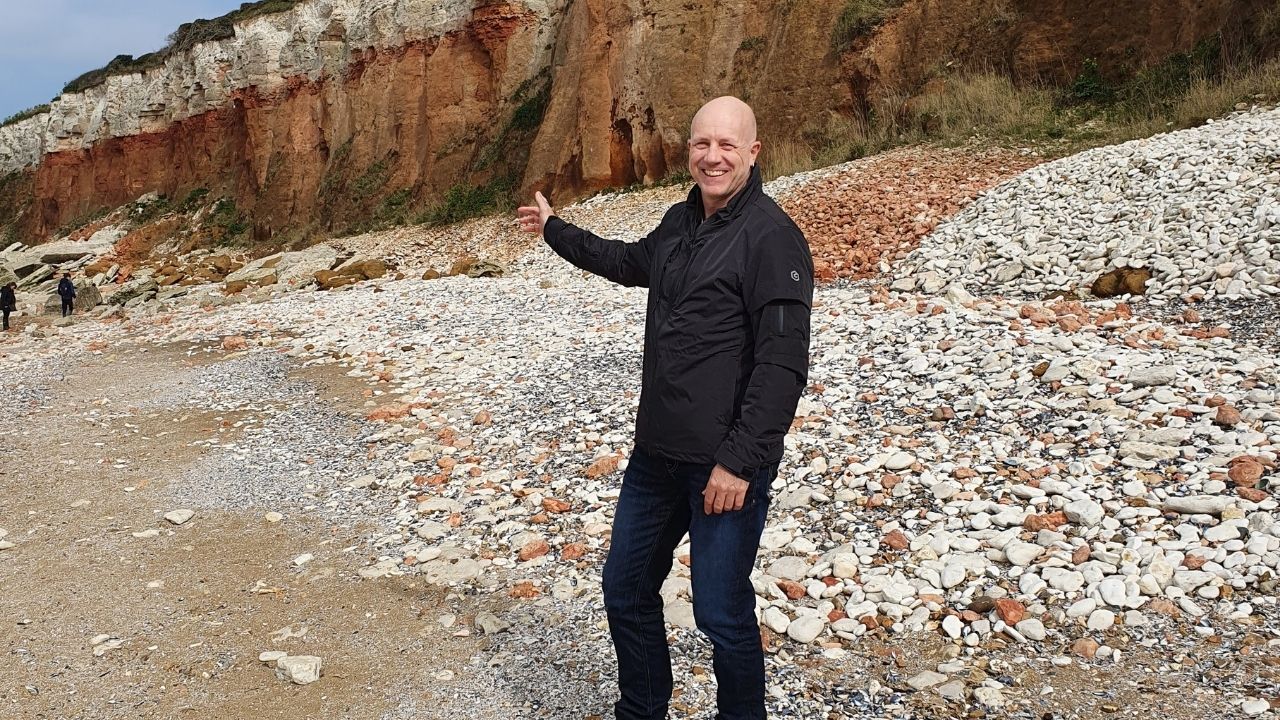 During this time, I have to say that the jacket was warm in outdoor temperatures of between 5-8 degrees with a slight wind. I was wearing a T-shirt and a fleece underneath, and felt no less cold than my Dad who was wearing a thick winter coat.

The breathability of the jacket was also good, and after walking for a few miles it didn't make me feel sweaty in any way.

In fact, on the first day of testing, I was very impressed!

I also played with the built in heating system. I have to say that the heating elements in the pockets were absolutely wonderful! It was easy to imagine that this would be an excellent jacket to wear if you were watching football or rugby at a stadium during the winter and wanted to stay warm.

One note: You need a power bank for the heating system to work. The same sort you might carry as a portable charger to keep your phone topped up.

The jacket has some different heat settings, and temperature control is achieved by a button on the inside.

I didn't feel the heat on the back panel so much – not to say it wasn't working, just that it was probably more subtle than the pocket heaters.

Overall, on a relatively windless but chilly spring day in the UK, the Gamma jacket faired very well with the built in heaters on.

Wearing the Gamma Jacket in the warm

I also had a chance to wear the jacket in warmer conditions when I returned back to Greece in early April. The temperatures were not hot – a modest 17 or 18 degrees with overcast skies. Not particularly humid.

Underneath the jacket, I wore a simple shirt. My plan was to wear the shirt in the afternoon, and then put on the jacket in the evening when things got cooler.

In the mean time though, I had to walk about 2km with the jacket on carrying a couple of carrier bags. I thought this would be a good chance to test its breathability.

I have to say I don't think it performed very well in this regard. Even after just a 2km walk, I felt quite sweaty in the jacket, and I had to take it off to continue walking in comfort.

I did not rate the breathability of the jacket very highly in warm weather. It's breathable nature is much better in cooler weather.

Wearing the Gamma in the wind

I also wore the jacket on a couple of windier days. Without the heaters on, the wind resistant nature of this graphene clothing is next to zero. With the heaters on it's pleasant enough. To be fair, this is what the company mention in the booklet.

The thing is – do you want to be reliant on a power source to keep you warm in the outdoors? I've spent quite literally years of my life traveling by bicycle all over the world and I can tell you the answer is no!

Is the Gamma Graphene Jacket Waterproof?

It's supposed to be, but my biggest issue with this jacket though, is that it simply isn't waterproof. I tried two tests – one on a sleeve where I tried to keep some tissue paper dry in a pocket. The other wearing the hood.

On both occasions, it only took a minute or two for the inside of jacket (and the tissue and my head!) to become wet.

Also, I was expecting a Goretex type effect where water would roll off the surface. Instead, this graphene infused fashion item just soaks it up.

To say I was disappointed is an understatement. This jacket is marketed as being waterproof, but unfortunately fails that test.

In it's defense, the jacket performed ok in light rain. I went for a walk of about half an hour in drizzle in Greece, and the jacket did not soak up any water so that my inner clothes were wet.

The outer of the jacket itself was wet when I returned home. The inner was still dry though.

I should also mention, that at the end of my walk, my cheap trekking pants from Decathlon were also dry. Make of that what you will!

Is the jacket for every season?

To be honest, if they had marketed this as the best jacket for autumn and spring, I would be in total agreement. Its shortcomings in regards to being waterproof and its lack of wind resistance make it hard for me to recommend this for serious use in the outdoors in winter.

That said, I haven't actually been able to try it in the winter yet. So, watch this space between December and February, as I'll update the review!

Who is the Gamma Jacket for?

This is a tough question to answer. It seems to be marketed at outdoor types, but its obvious shortcomings mean that it is not suitable for anyone serious about adventures in the outdoors.

I can only conclude that it might be better suited to digital nomad types who want a ‘do it all' jacket that doesn't weigh a lot to fit in their bag.

The issue I have here is that while the jacket might be useful to them on occasion, they may start thinking that it has more features than it does, and find themselves in trouble out on a remote trail somewhere.

If you don't have room for specialist outdoor gear as you travel around the world, it could be a good compromise.

While I applaud the attempt at creating graphene infused fabric and the concept of the Gamma jacket, I feel that the jacket itself is a bit of a let down because of the waterproofing issues.

I think it would be great for going to watch a football or rugby match (or any outdoor event). Perfect for light outdoor activities in mild weather. Useful as a jacket to use in the autumn or spring. At this stage though, it does not have high enough performance to be of use in the wilderness and conditions which might provide tougher climates.

I had considered using this as part of my waterproof gear in my bike touring gear, but think I'll stick with the Goretex jacket I have.

The price tag is also a bit high! You can find out more about the jacket here: Wear Graphene

Readers have many questions related to Graphene infused clothing, and some of the most commonly asked ones include:

There is no definitive answer, as graphene jackets are still a relatively new technology. Some people have had good experiences with them, while others have found that they are not waterproof or windproof enough for serious outdoor use. Overall, graphene jackets seem to be most useful for mild outdoor activities or as an extra layer for colder weather.

Is the Gamma jacket real?

The Gamma Jacket by Wear Graphene has now developed beyond its Kickstarter phase to become a genuine product. 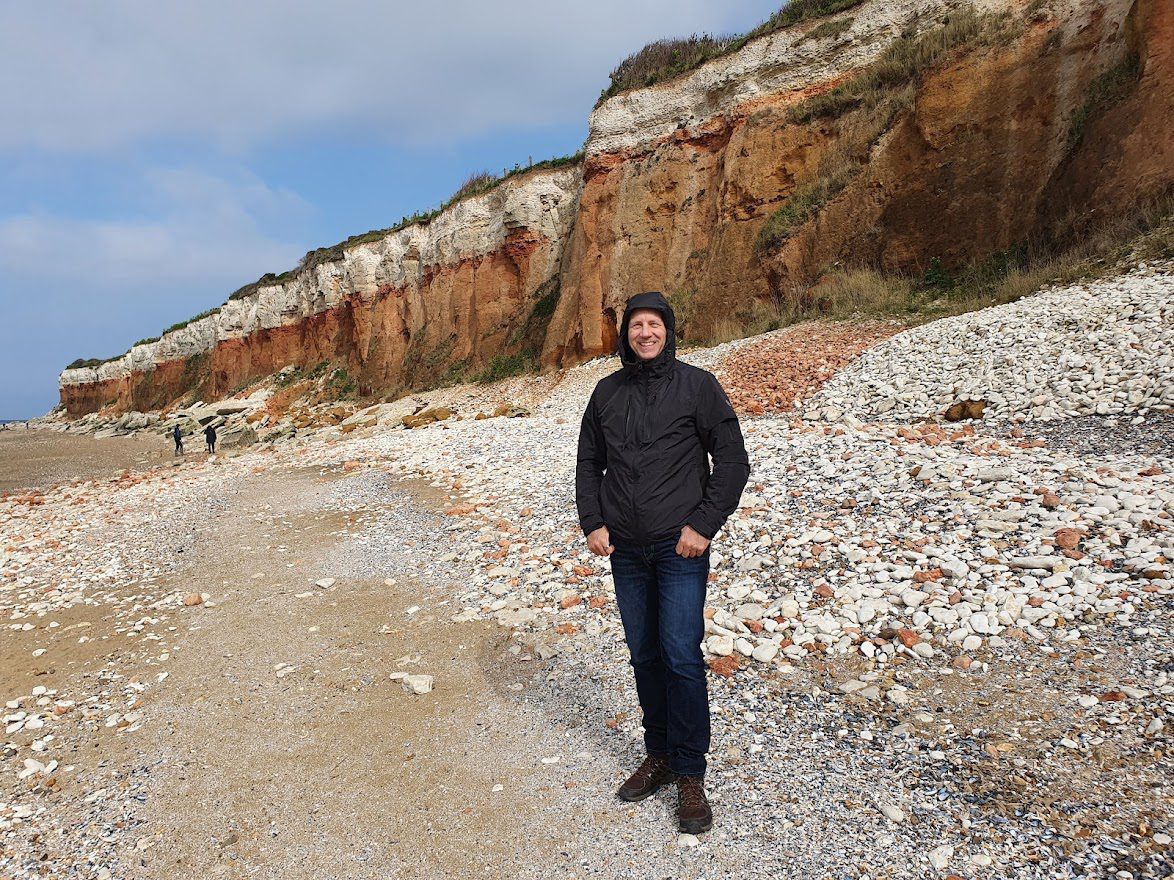