Last Updated On September 21, 2022 by Dave Briggs Leave a Comment

As Leonardo Sciascia said – All of Sicily is a dimension of the imagination. We've listed these quotes about Sicily to help inspire your next trip to this beautiful part of Italy. 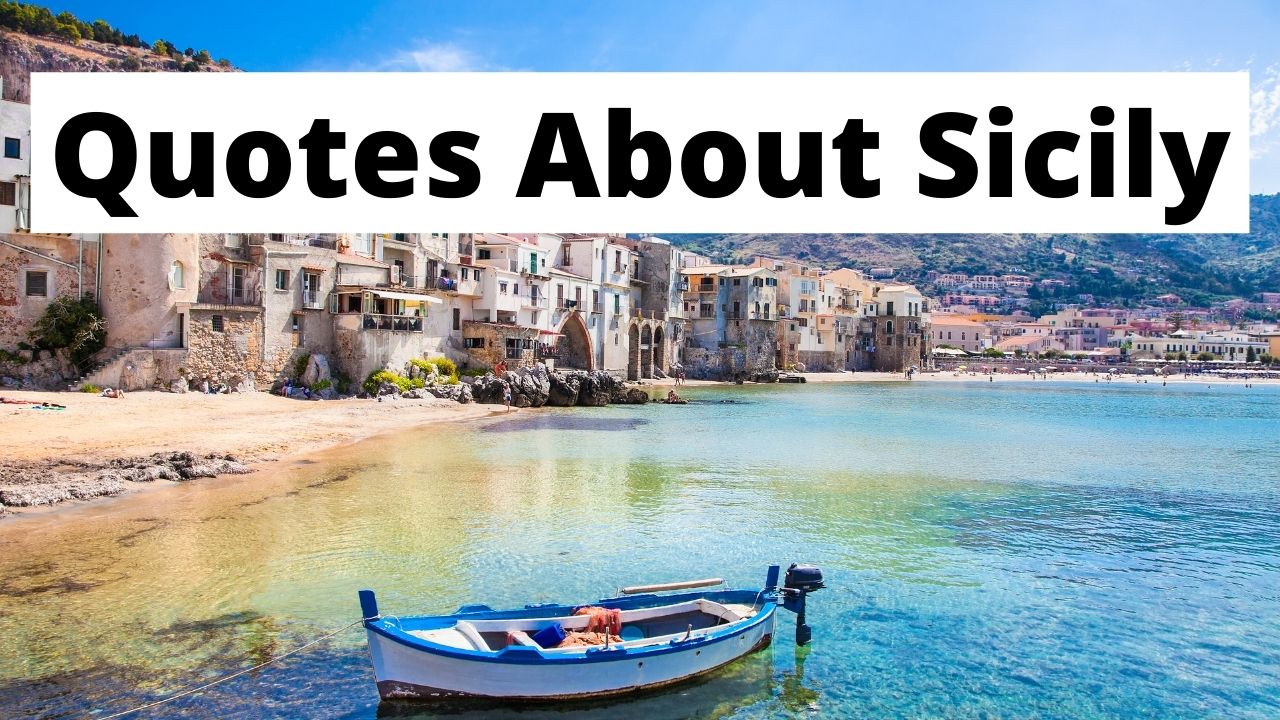 The quotes we've listed come from authors, poets and travelers who have been inspired to write about Sicily's magic, culture and beauty. Enjoy!

All of Sicily is a dimension of the imagination. 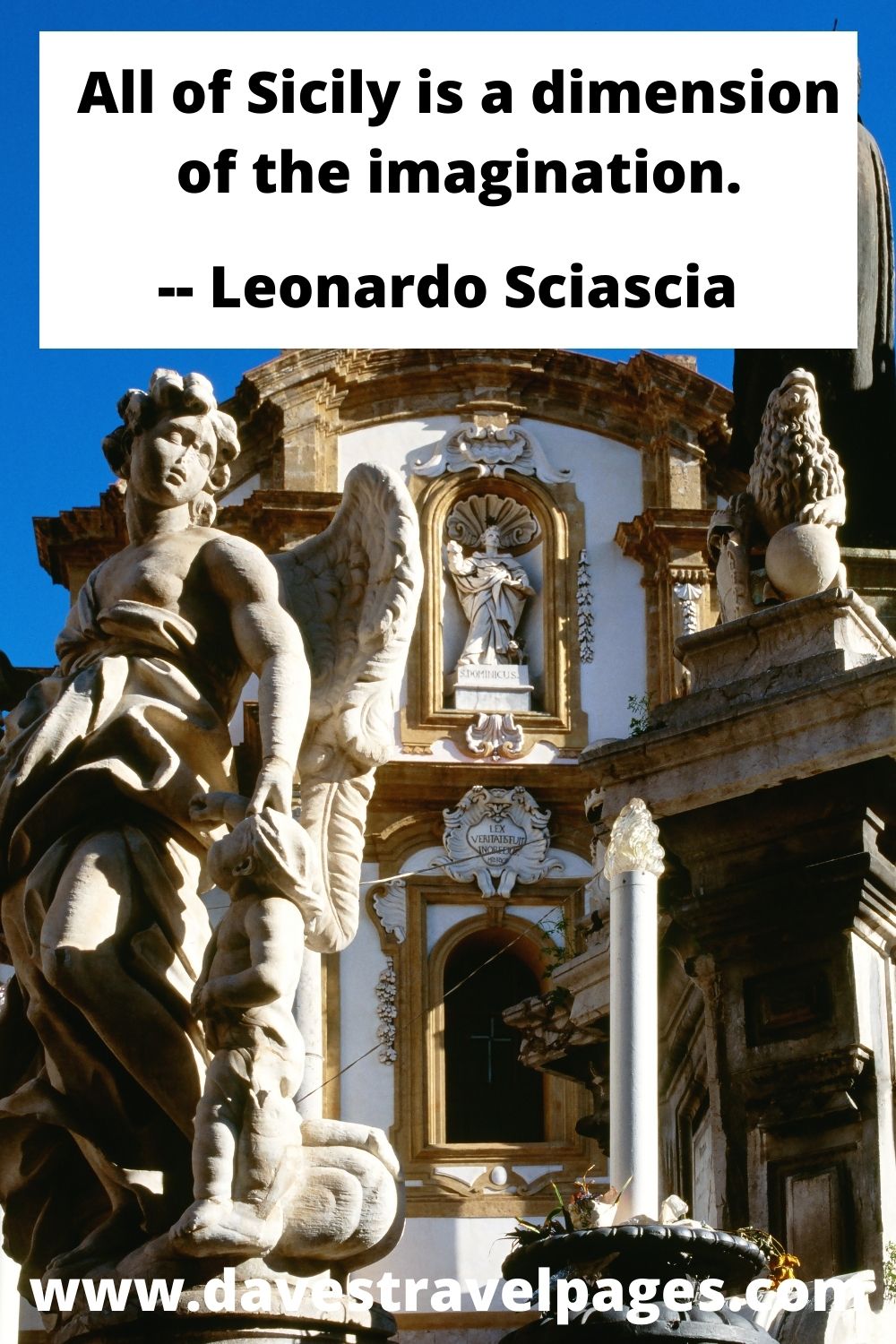 “Were a man to spend only one day in Sicily and ask, ‘What must one see?' I would answer him without hesitation, ‘Taormina.' It is only a landscape, but a landscape where you find everything on earth that seems made to seduce the eyes, the mind and the imagination.”

“I do not envy God’s paradise because I am so satisfied to live in Sicily.”

“Going to Sicily is better than going to the moon.” 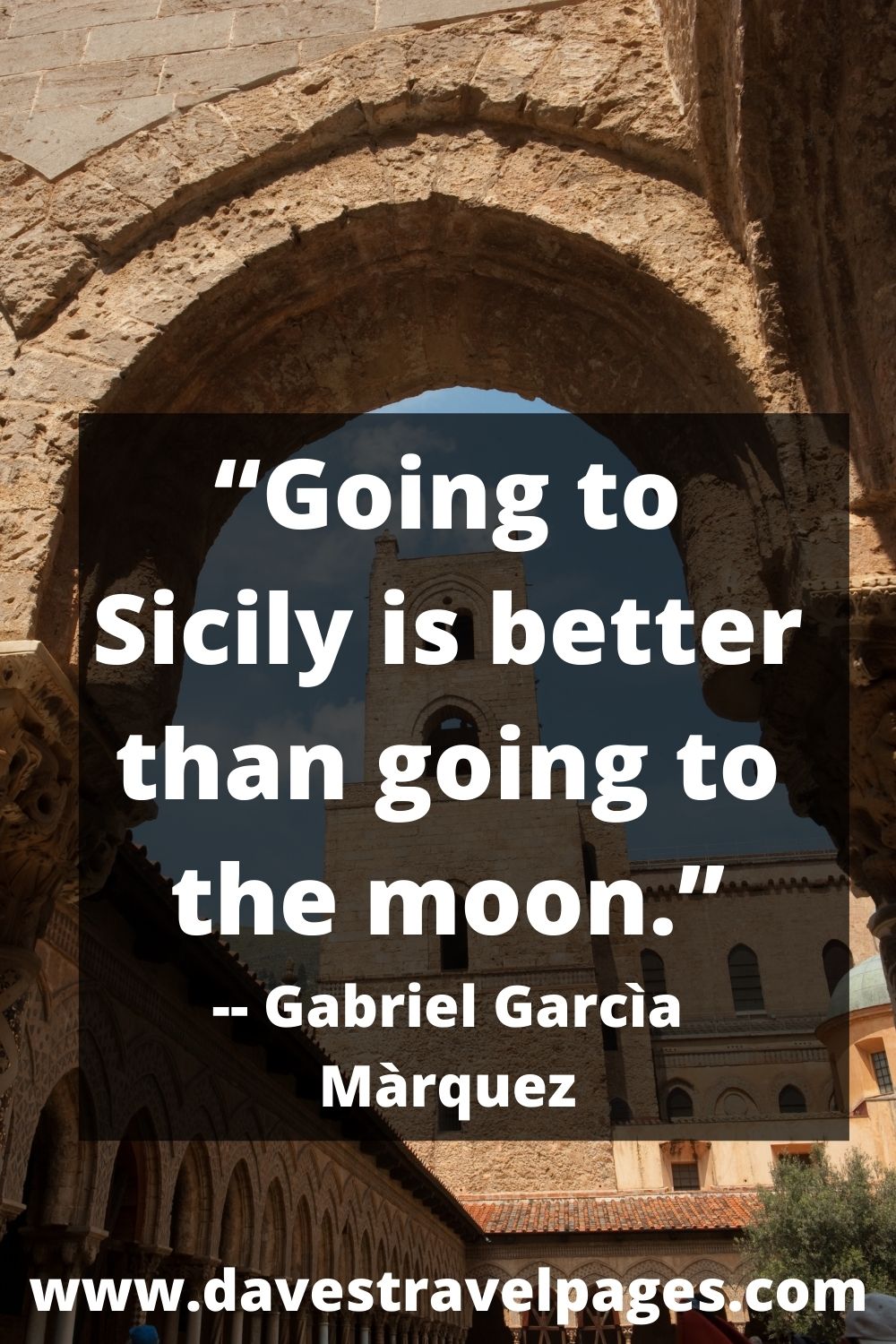 “Sicily is an island lying outside time, where past events endure in an external present, a beach on which the tides of successive civilizations have heaped in disorder their assorted treasure.”

“Palermo was lovely. The most beautifully situated town in the world – it dreams away its life in the Conca d’Oro, the exquisite valley that lies between two seas. The lemon groves and the orange gardens were entirely perfect.”

“This is what I wanted Sicily to be, something to soothe my shattered soul. It doesn’t take much: a bowl of good pasta. In this case it’s the famous spaghetti al nero di seppia (spaghetti and cuttlefish).”

“…On the sixth day,
God accomplished His work
And, pleased with all the beauty
He had created,
He took the Earth in His hands,
And kissed it.
There, where He put His lips,
That’s Sicily.”

“The climate's delicate, the air most sweet,
Fertile the isle, the temple much surpassing
The common praise it bears.”

“All Sicilian expression, even the most violent, is really wish fulfillment: our sensuality is a hankering for oblivion, our shooting and knifing a hankering for death; our laziness, our spiced and drugged sherbets, a hankering for voluptuous immobility, that is, for death again; our meditative air is that of a void wanting to scrutinize the enigmas of nirvana.” 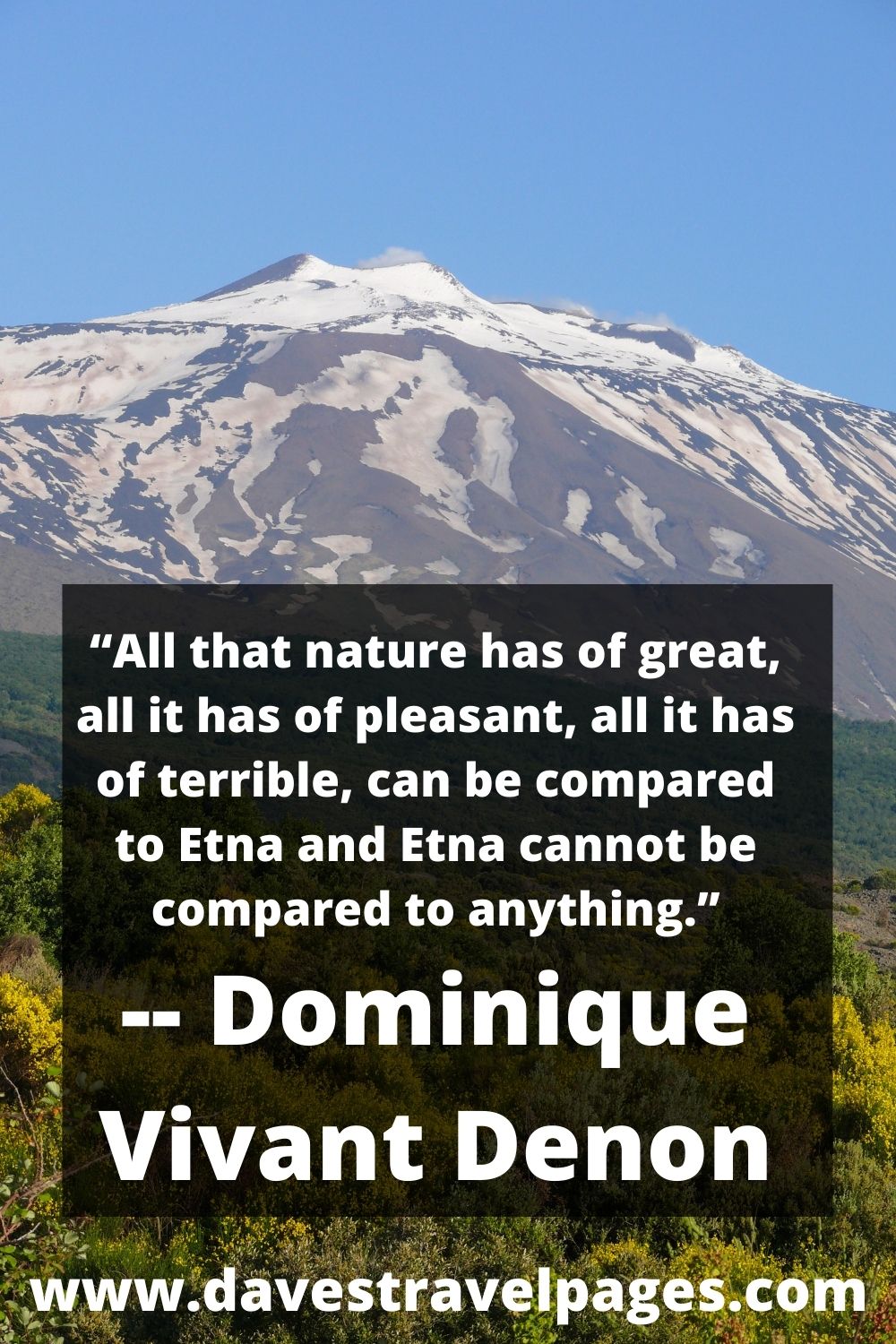 “Sicily is the pearl of this century… Since old times, travelers from the most far away country… boast of its merits, praise its territory, rave about its extraordinary beauty, and highlight its strengths… because it brings together the best aspects from every other country.”

“Food is more essential than clothes”

“I hate and detest Sicily in so far as I love it, and in so far as it does not respond to the kind of love I would like to have for it.”

“Sicily has suffered 13 foreign dominations from which she has taken both the best and the worst. The sequence of different cultures has made Sicily a fascinating place, quite unlike any other.”

“But you don't come to Palermo to stay in minimalist hotels and eat avocado toast; you come to Palermo to be in Palermo, to drink espressos as dark and thick as crude oil, to eat tangles of toothsome spaghetti bathed in buttery sea urchins, to wander the streets at night, feeling perfectly charmed on one block, slightly concerned on the next. To get lost. After a few days, you learn to turn down one street because it smells like jasmine and honeysuckle in the morning; you learn to avoid another street because in the heat of the afternoon the air is thick with the suggestion of swordfish three days past its prime.”

“The oranges of the island are like blazing fire among emerald boughs, And the lemons are like the pale faces of lovers who have spent the night crying.”

“Sicily is more beautiful than any woman.”

“The South of Italy and Sicily were a gift from the gods to the Greeks.”

Curious about Sicily? Check out these “Frequently Asked Questions” to find out more about Sicily, one of the most interesting places in the world.

What Goethe said about Sicily?

Sicily has a distinctive and unique culture, especially in the fields of art, music, writing, cuisine, and architecture. It also contains important archaeological and ancient sites such as the Necropolis of Pantalica and the Valley of the Temples.

How would you describe Sicily?

Sicily is the largest island in the Mediterranean. The long summer months, rich culture, beautiful beaches and amazing Sicilian food make it an idyllic holiday destination.

What does Sicily produce?

Sicily has a number of important industrial centers, but the majority of the island is cultivated. Sicilians eat grapes, almonds, citrus fruit, and durum wheat, but these foods are also exported abroad. The island may be viewed as fairly arid despite its greenery.

Sicily is a place of stunning natural beauty that has been home to one civilization after the other. From its fertile soil and lush vegetation, to its fantastic architecture and rich history – Sicily truly does have it all! If you're in need of some inspiration or just want an escape from your everyday routine, consider booking a trip to this Mediterranean gem.

Take a look at these tours and trip to see Sicily's hidden treasures. They're guaranteed to make you love Sicily and your experience there!

Let us know if we can answer any questions about planning your next getaway!

Looking for more motivational quotes? Check these out: 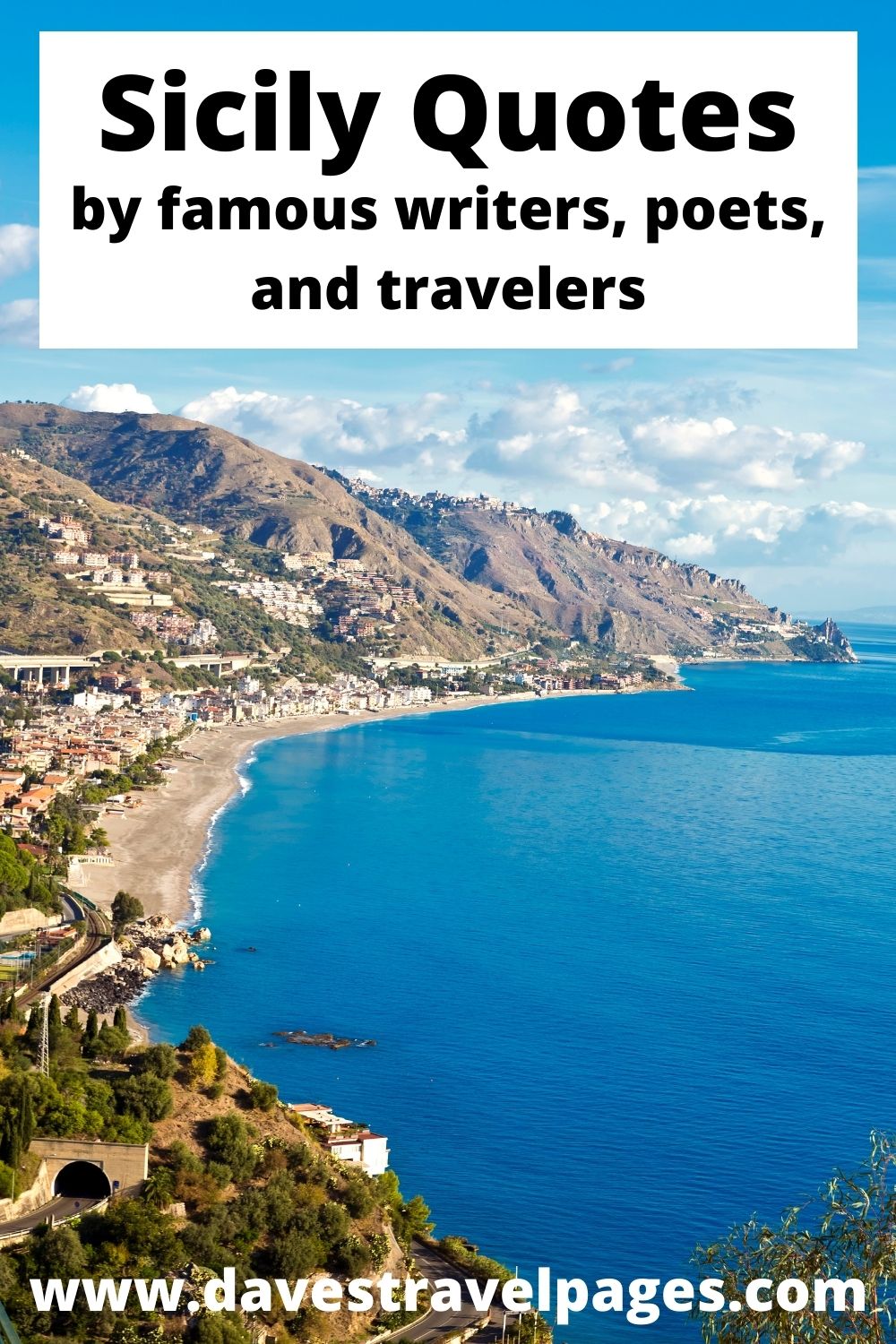