The quickest high speed ferry from Santorini to Ios has a trip duration of just 35 minutes, and in the summer there can be 8 ferries a day. 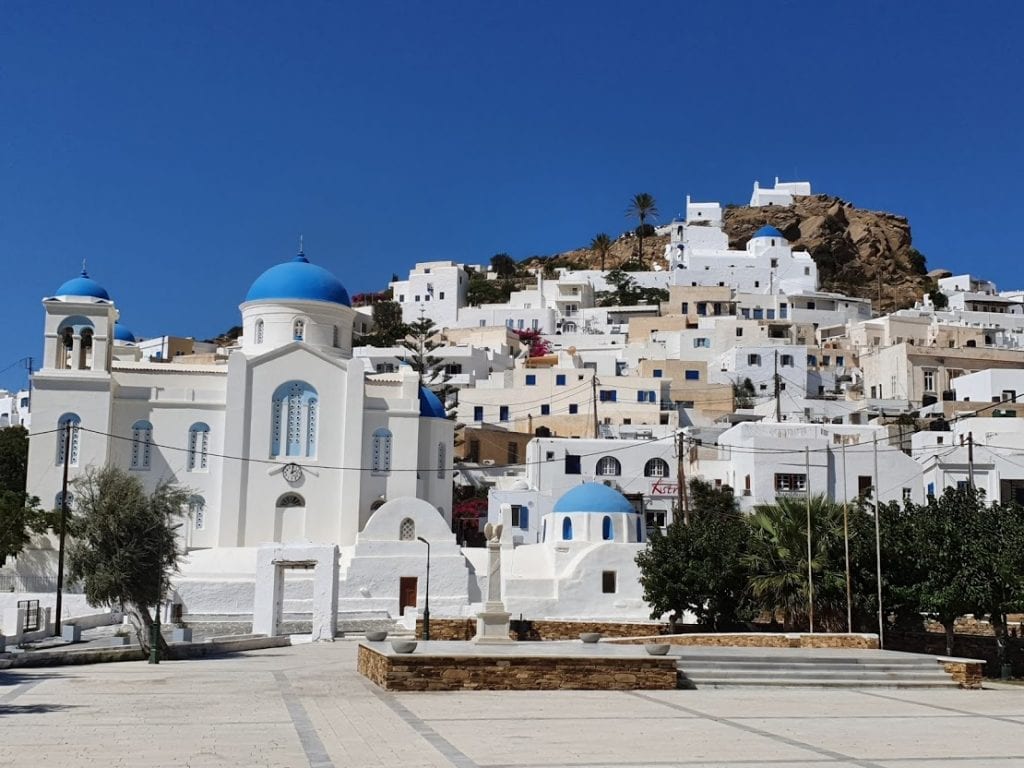 5 different ferry companies operate crossings on the ferry route between Santorini and Ios, using a mix of conventional ferries and high speed services.

As you can tell on this map, the Greek islands of Santorini and Ios are located very close to one another. This makes them a natural pairing when it comes to choosing which islands to combine on a Greek island hopping trip.

Another thing that makes traveling from Santorini to Ios by ferry worthwhile is the contrast between the two islands.

Although Ios has something of a reputation as a budget party island, I found it had a lot more to offer.

The beaches were among the best in the Cyclades islands of Greece (which is up against some pretty stiff competition!), there were some nice hiking trails, cool artisan and local product stores, and the sunsets were simply amazing!

If you're after the party scene, by all means go in August. Just make sure you have your hotels in Ios organized a few months in advance.

If you're not that bothered about the party side of things, might I suggest visiting Ios in June or September instead. It's more relaxed, cheaper, and the weather and sea temperatures are still great!

I've got some travel guides here that might be useful for further planning your itinerary in Ios island, Greece:

How to get from Santorini to Ios

With the intro out of the way, let's look at how you can travel between Santorini and Ios.

As there is no airport on the Greek island of Ios, flying is not an option. The only way to make a journey from Santorini to Ios is by taking a ferry.

Santorini to Ios ferries run all the year round. Most people who want to visit Ios will travel in the summer, and there can be 8 sailings a day in August.

While there is still a ferry service between Santorini and Ios in the winter, there are fewer sailings. You could count on perhaps just one ferry a day in the low season.

The Greek ferry network is made up of dozens of different ferry operators. On the Santorini to Ios ferry route, there are 5 or 6 different companies to choose from depending on the month.

Each ferry company offers a different type of vessel such as a slower conventional ferry or a high speed ferry. Ferry ticket prices will differ depending on the company and type of vessel.

Rather than visiting each companies website to check their individual ferry schedule for the Santorini – Ios journey, I recommend Ferryscanner where you can see everything in one place. 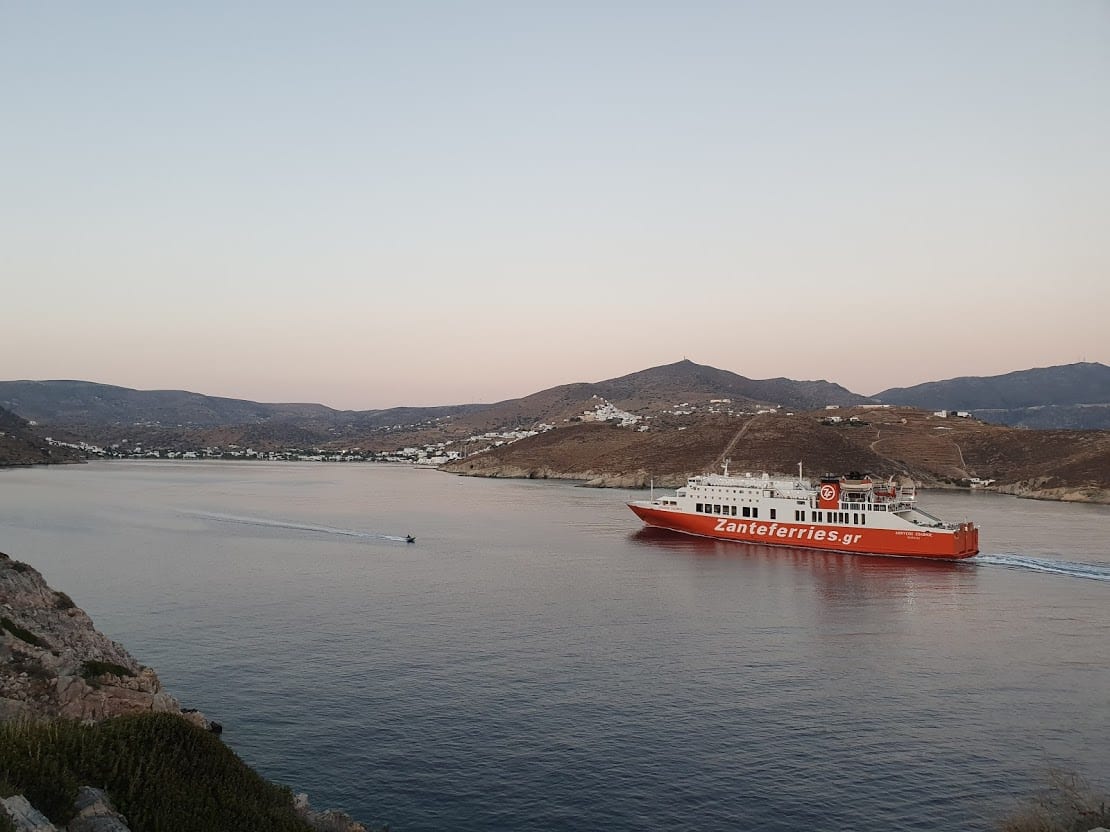 High speed ferries from Santorini to Ios can have travel times as quick as 35 minutes. The slow ferry sailing to Ios from Santorini island takes around 1 hour and 50 minutes.

The Blue Star Ferry is somewhere in the middle at about an hour, and may be the most cost effective way to travel.

The most regular company offering a daily ferry from Santorini to Ios is SeaJets, but they can be more expensive. As a general rule, you can expect faster ferries to have more expensive tickets prices.

Prices for ferry tickets foe the boat from Santorini to Ios change from year to year. The best place to look at up to date schedules and book tickets online is Ferryscanner.

A few travel tips for visiting the Greek island of Ios:

What to see in Ios Greece

I've already mentioned my guide on the best things to do in Ios. A quick list of highlights if you haven't got time to check that travel blog post out are: 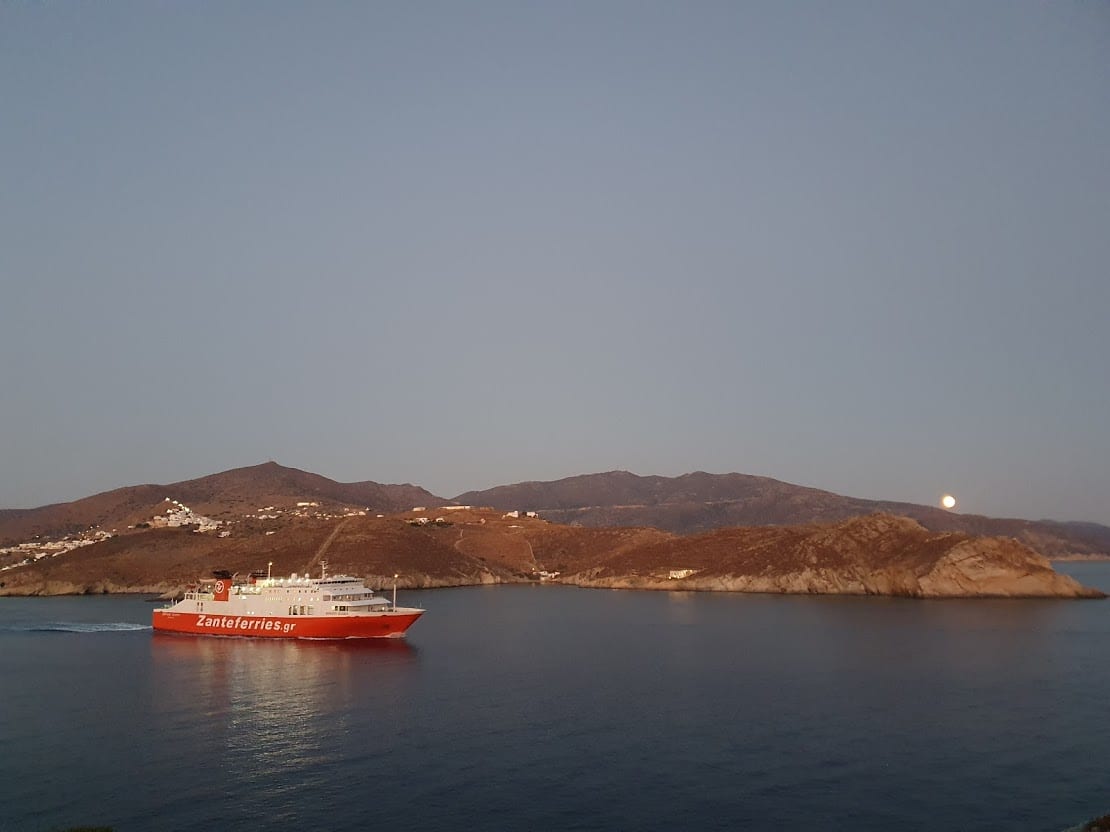 How to take the ferry from Santorini to Ios FAQ

Questions that people ask about traveling to Ios from Santorini include:

How can you get to Ios from Santorini?

The only way to travel from Santorini to Ios is to take a ferry. There are up to up to 3 ferries per day sailing to the island of Ios from Santorini leaving from Athinios Port in Santorini and arriving at Ios Port.

There is no airport in Ios island, so the only way to take a trip from Santorini to Ios is to use a ferry. The closest airport to Ios is on Santorini.

How long is the ferry from Santorini to Ios?

The ferries to Ios from Santorini take between 40 minutes and 1 hour and 50 minutes. Ferry operators on the Santorini Ios route may include SeaJets, Zante Ferries, and Express Skopelitis.

Ferryhopper is perhaps the easiest site to use when it comes to booking Ios ferry tickets online. Although I recommend you book your Santorini to Ios ferry tickets as much in advance as possible, you might also prefer to use a travel agency in Greece when you have arrived.

How do I get from Santorini airport to Ios

Using the airport in Santorini is a good way to get to Ios for international travelers, as Santorini airport has connections with European cities. Once at Santorini airport, you'd then need to take public transport or a taxi to Athinios Port, from where you'd then take the Santorini to Ios ferry.

Is Ios cheaper than Santorini?

In comparison to popular Greek islands like Santorini and Mykonos, Ios is one of the more budget-friendly places in Greece since it targets younger visitors and backpackers. When the island is bustling with tourists during the high season, accommodation costs can go higher, but they remain relatively inexpensive in comparison to Santorini.

You might find these Ios and other Greek island ferry guides to be of use if you're planning an island hopping trip in the Cyclades:

If you found this guide on the ferry Santorini to Ios useful, please share on social media. You'll find some buttons in the bottom right corner of your screen. The image below would look great on one of your Greek island Pinterest boards! 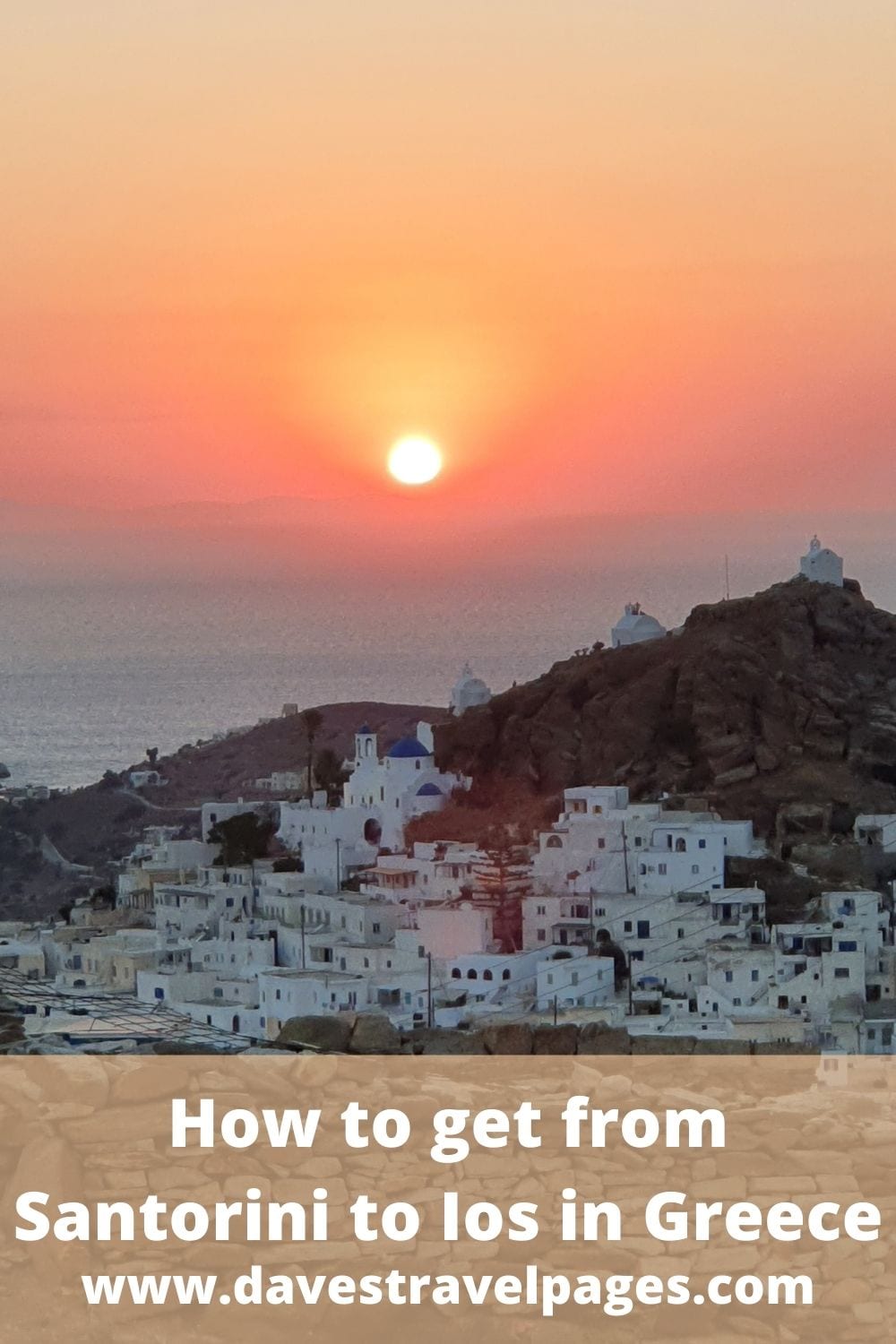 Ios is a beautiful island worth exploring. If you're looking for a more relaxed experience with less parties and crowds of people, try visiting in the off season-June or September. You'll enjoy warmer weather, fewer people and lower prices without sacrificing any amazing scenery!

Have any questions about how to book ferry tickets or how to reach Ios? Leave a comment below, and I'll get back to you!

Dave is a travel writer who's been living in Greece since 2015. In addition to creating this guide about taking a ferry to Ios from Santorini, he's written hundreds of other blog post and itineraries about other islands in Greece.