The only way to get to Tinos from Athens is by ferry. This travel guide shows you how to take the Rafina to Tinos ferry, and why it's a better option than Piraeus to Tinos. 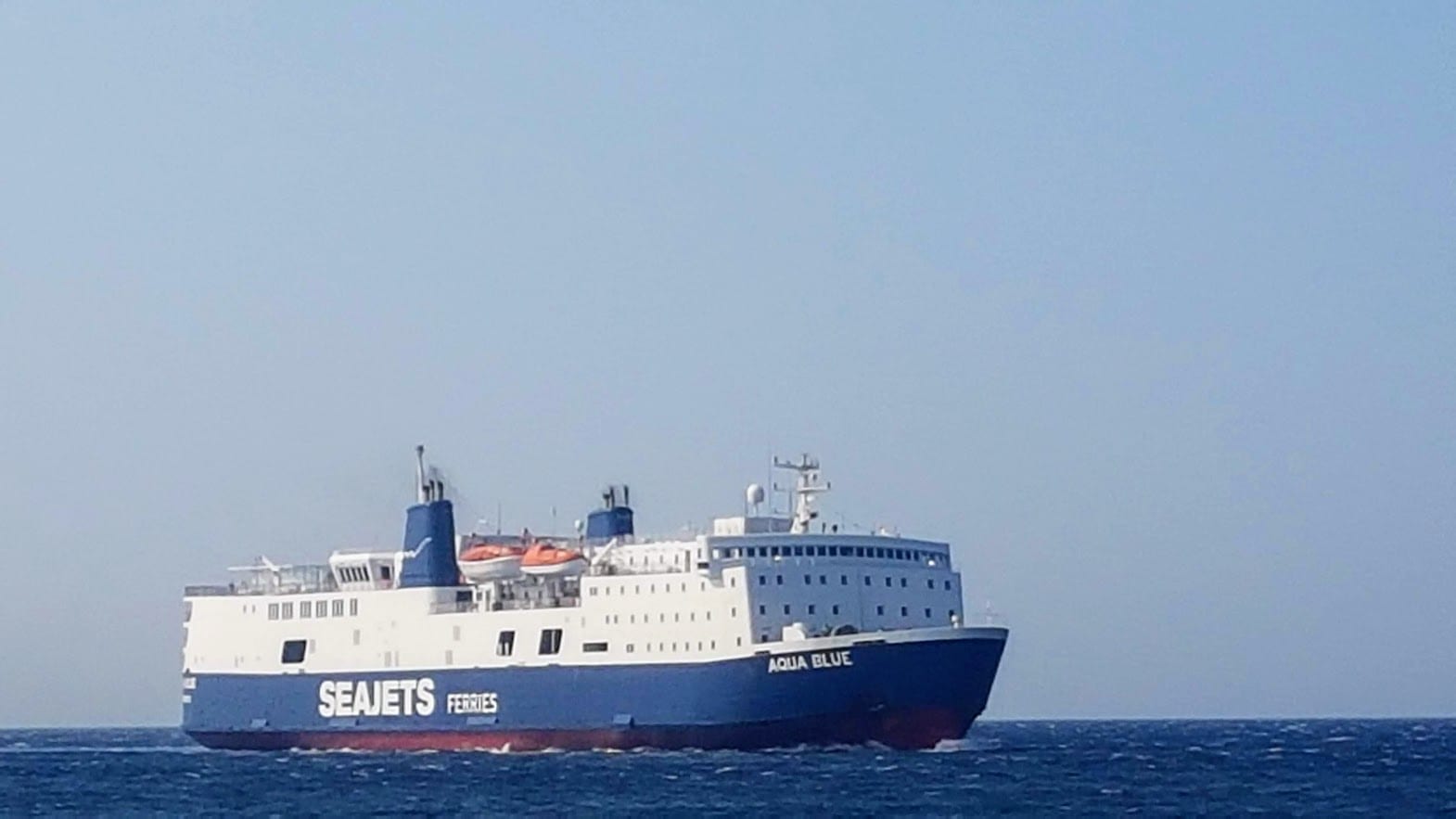 The Greek island of Tinos is about a 2 to 4 hour ferry ride away from Athens, depending on which ferry you take. This means it's possible to go to Tinos island for a short break, or to visit as a starting point on a Greek island-hopping trip.

Whatever your reason for visiting Tinos for your holidays, this amazing Greek island has tons to offer. From stunning villages to beautiful, quiet beaches, it turned out to be one of our favourite Greek islands so far. 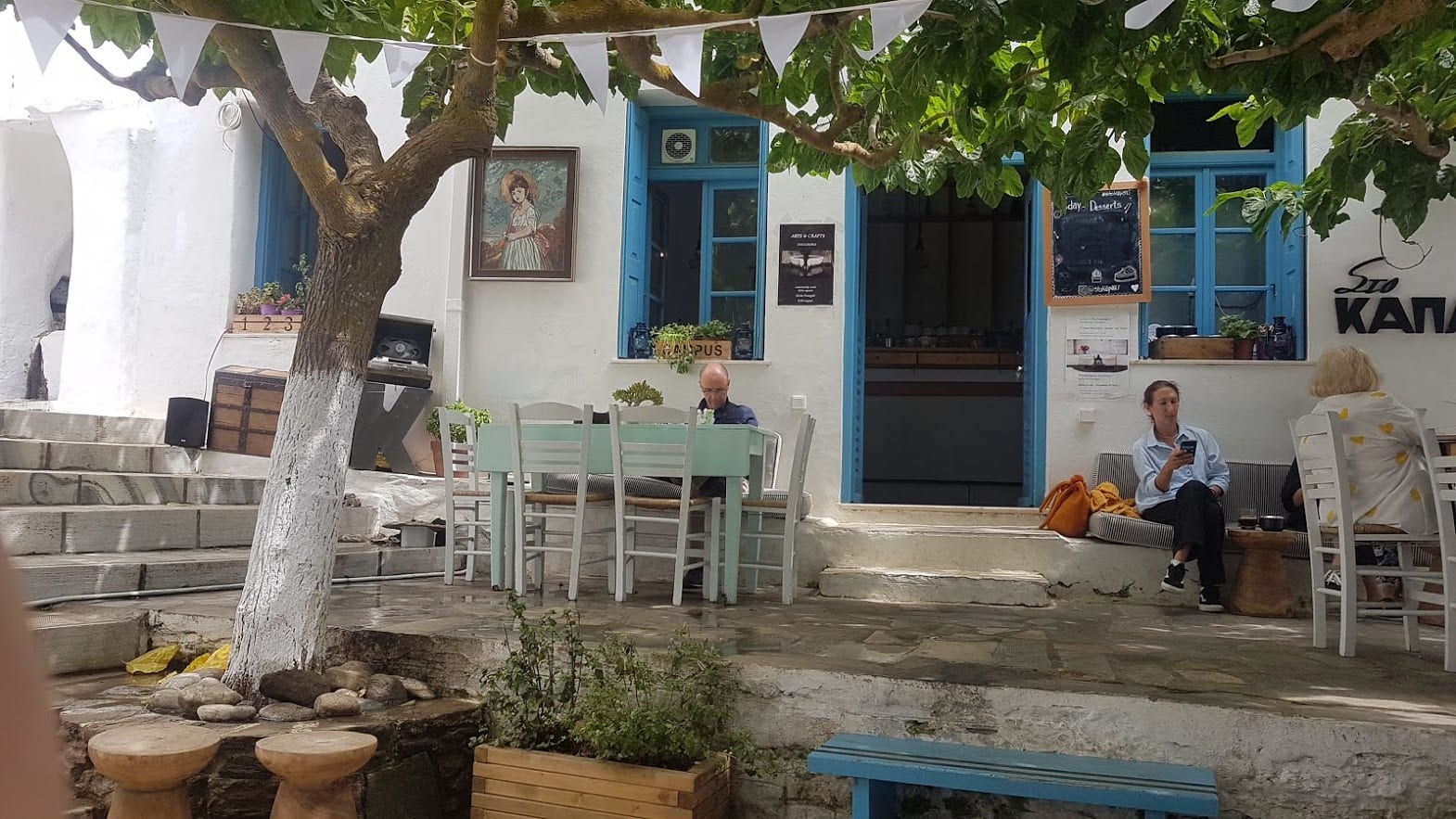 This guide will show you how to get from Athens to Tinos via both Rafina and Piraeus ports in Athens. You should note that if you plan to arrive in Greece at Athens airport, and want to go straight to Tinos, then Rafina port will be your best option.

Most boats depart early in the morning, but there are also some evening options.

If you’ve never heard of Rafina port before, don’t worry! It’s a much smaller port than Piraeus, and it’s also closer to the airport.

As such, if you plan to arrive in Greece at Athens airport, and want to go straight to Tinos, Rafina port is your best option.

Rafina port is marginally closer to Tinos island than Piraeus. If you are looking for the best option on how to get to Tinos, the quickest way is to leave from Rafina port.

There are several ferries and highspeed ferries departing on a daily basis in summer. There are ferries leaving for Tinos early in the morning, in the afternoon, and also in the evening on certain days. In winter, there are typically fewer options.

Depending on the type of ferry you choose, you can get to Tinos in as little as 2 hours. Larger ferries will generally have a journey time between 3 and 4 hours from Athens to Tinos.

The best place to check ferry schedules and to book ferry tickets online is at Ferryhopper. 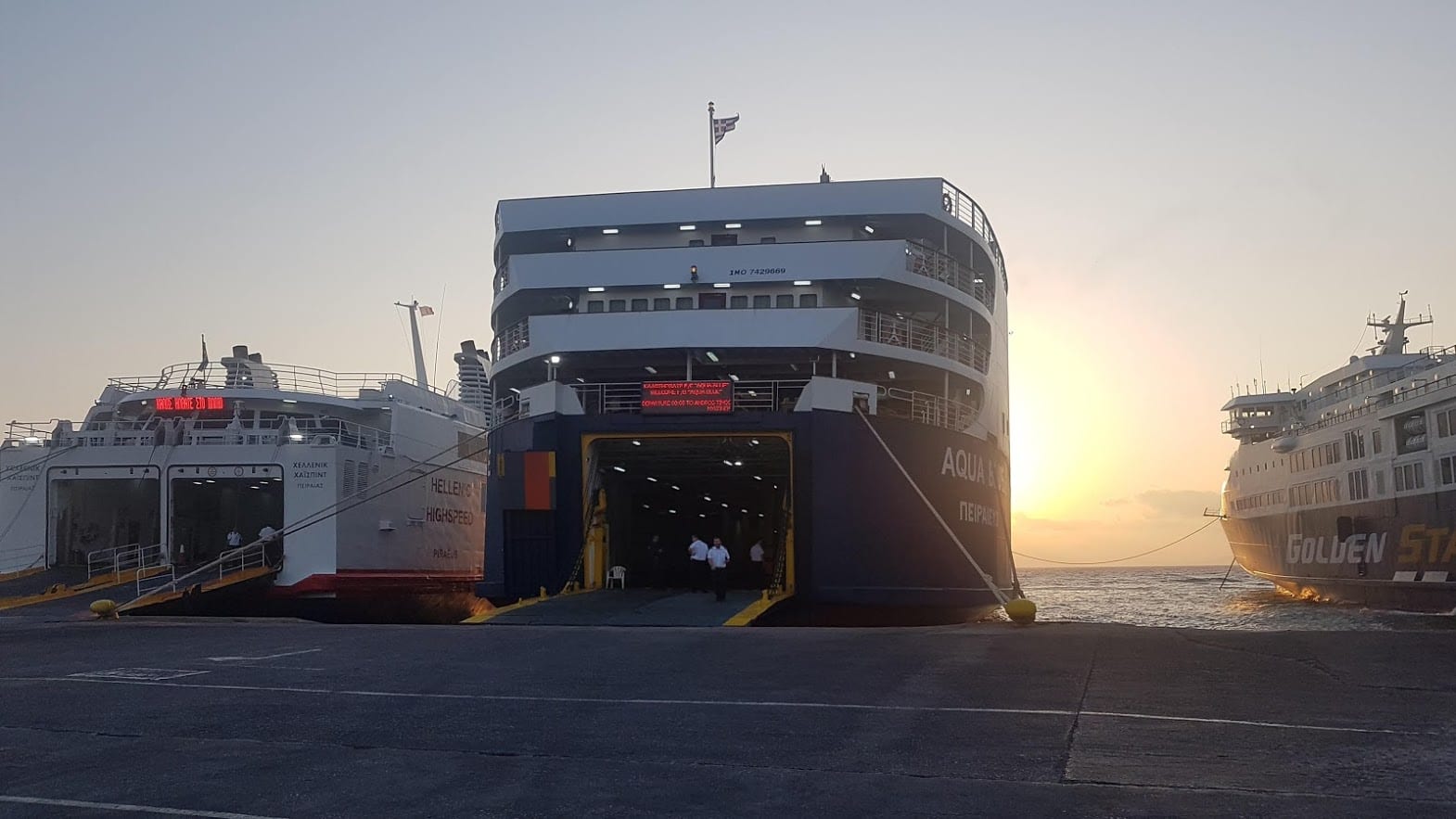 The Greek ferries sailing from Rafina to Tinos are operated by the ferry companies SeaJets, Golden Star Ferries and Fast Ferries.

These ferries can also carry vehicles, if you have your own. If you are island hopping and renting cars, it will be more cost effective to hire a vehicle on each island.

Plus, many companies won’t allow their cars to be taken on ferries. Make sure you check their individual policies. The larger ferries can also carry vehicles, if you have your own.

It will, however, be more cost effective for most visitors to travel as a foot passenger, and then hire a vehicle on the island. 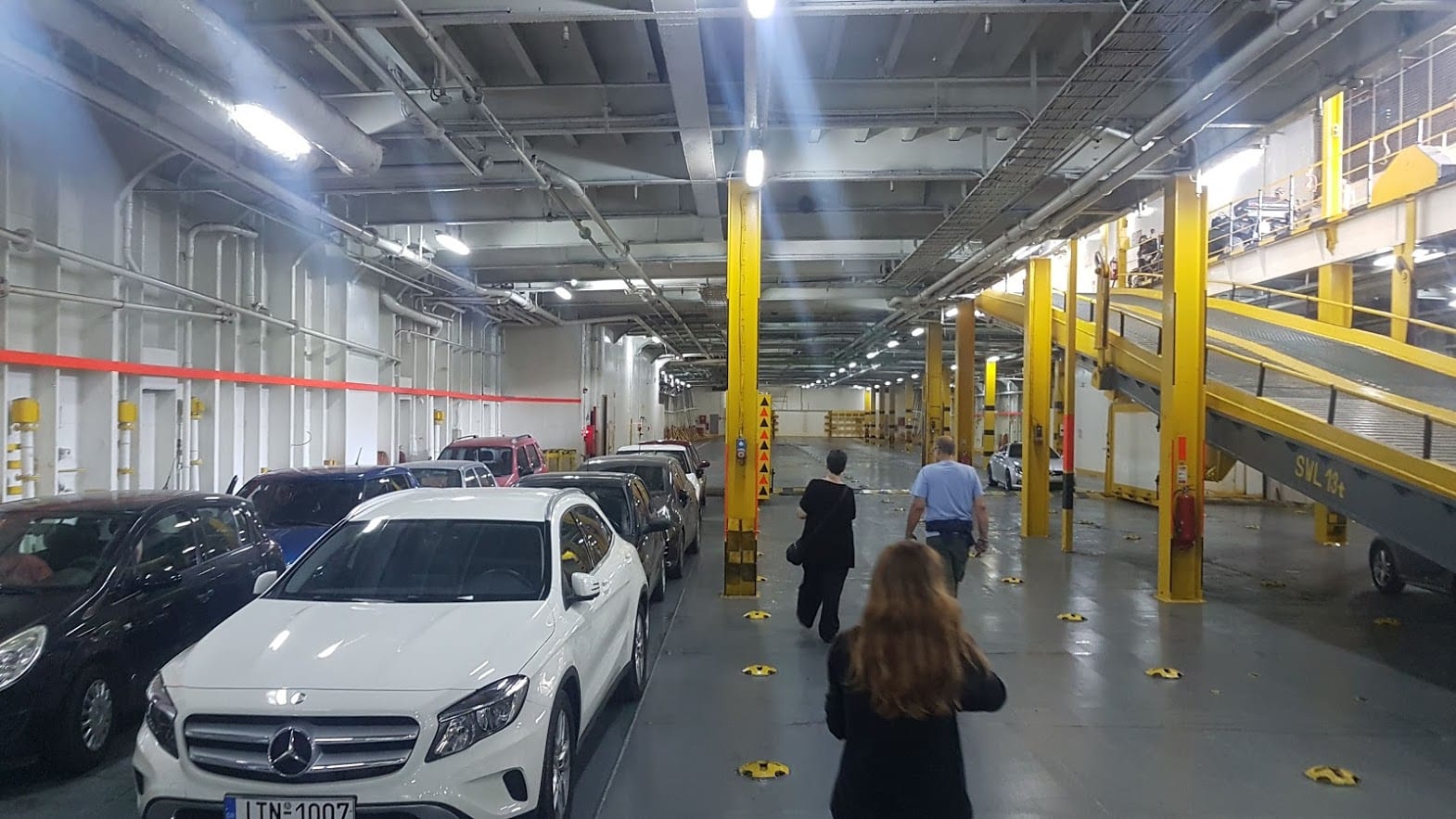 Rafina to Tinos on the SeaJets

SeaJets operate two large high-speed ferries from Rafina port to Tinos. They are called Power Jet and Paros Jet and they will get you to the island in just a couple of hours. They briefly stop in Andros on the way.

If you have used other SeaJets ferries in the past when traveling around the Cyclades islands, you may be familiar with the smaller vessels that only take passengers.

These two ferries going from Rafina to Tinos also have vehicle capacity, and are quite large. Ticket prices for passengers start at 35.50 euro.

Going from Rafina to Tinos on the Golden Star Ferries

Another company serving the Rafina – Tinos is route are the Golden Star Ferries. Τhe Superferry and the Superferry II go to Tinos once per day, and the trip lasts just over three and a half hours.

If budget is an issue, these ferries are one of the best options, as tickets start at 29 euro. The ferries are both large, so you will have an overall smooth trip.

This company also operates a fast, direct ferry from Rafina to Tinos, called Superexpress. This has no deck option, so if you like sitting outdoors it’s best to avoid it. Tickets start at 35 euro and the trip takes a couple of hours.

Taking the Fast Ferries from Rafina to Andros

Another company serving the Rafina – Tinos route is Fast Ferries. They currently have three large conventional ferries on the route.

Ticket price are similar to the Golden Star Ferries, starting at 29 euro per person, and the trip takes between 3 and 4 hours, depending on which ferry you choose.

My experience on the Rafina – Tinos ferries

In 2019, we used the Aqua Blue ferry, operated by Seajets, which doesn’t serve the route anymore. This was a large, conventional ferry similar to the ones operated by Golden Star and Fast Ferries.

We travelled during the windy Meltemi season, towards the end of August. As a result, a short part of the route was pretty rough. We could feel it even though we were on the large ferry.

In our opinion, if you get seasick easily, it’s best to book tickets for the largest ferries. It might take you a little longer to get to Tinos, but you will be in one piece!

Pro-tip: If you are travelling during the windy Meltemi season of July, August and early September, we would strongly suggest avoiding the faster, smaller ferries, as the sea can get pretty rough.

Getting to Rafina port is fairly straightforward. For more information, check out this article: Rafina Port in Athens

In spring / summer, there is one daily ferry serving the Piraeus to Tinos route. This is the Blue Star Paros, departing daily at 7.30 am.

This large ferry stops at Syros on the way and takes four and a half hours to get to Tinos. If you book well in advance, you can get non-transferable, non-refundable tickets for just 20 euros, so it’s an option if you are on a budget. Normal prices start at 29.50 euros.

How to get to Tinos from Santorini

If you have already visited cosmopolitan Santorini, you will definitely love Tinos, which is quieter and wilder. Tinos is rarely included in visitor’s itineraries from Santorini, even though there are direct ferries connecting the two islands.

You can take either the Superferry, which is a large, slow ferry, or the Superrunner, which will take you from Santorini to Tinos in just 3.5 hours.

How to get to Tinos from Mykonos

Tinos and Mykonos are very well connected, with ferries running several times a day. Travel time is 20-35 minutes, so if you were looking to visit another island after Mykonos, definitely look into Tinos.

How to get to Tinos from other islands

There are direct ferries from Tinos to several other Greek islands, such as Andros, Syros, Paros and Naxos. You can also take a ferry from Santorini to Tinos twice a week during the summer.

If you are Greek island hopping, try to include Tinos in your itinerary – you will discover an authentic, picturesque place with fewer foreign tourists than other Greek islands.

Where to stay in Tinos

One you've organized your journey to Tinos on the ferry, you'll want to find somewhere to stay.

When it comes to choosing a hotel for your vacation, it is important to do your research and find one that meets your needs. Some factors to consider when making your decision include the cost, location, amenities, and reviews from other guests.

These are some of the best hotels on Tinos: 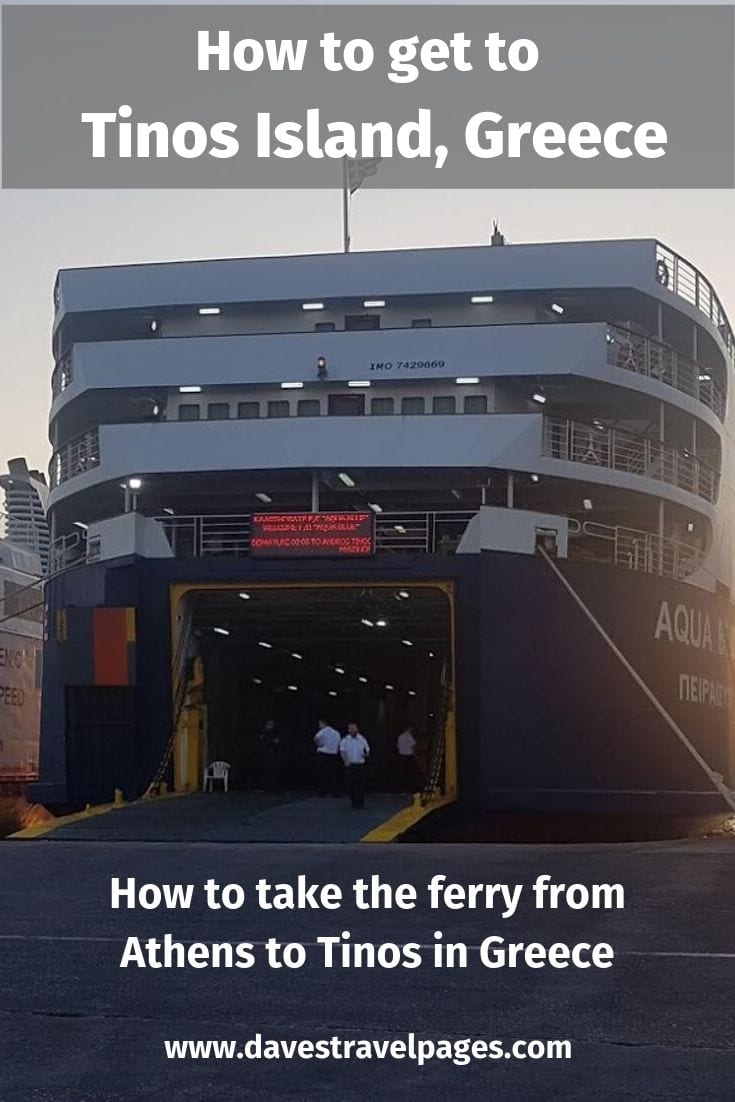 How to get to Tinos – Your experience

Have you been to Tinos, and how did you get there? Let us know in the comments!