Last Updated On February 28, 2022 by Dave Briggs Leave a Comment 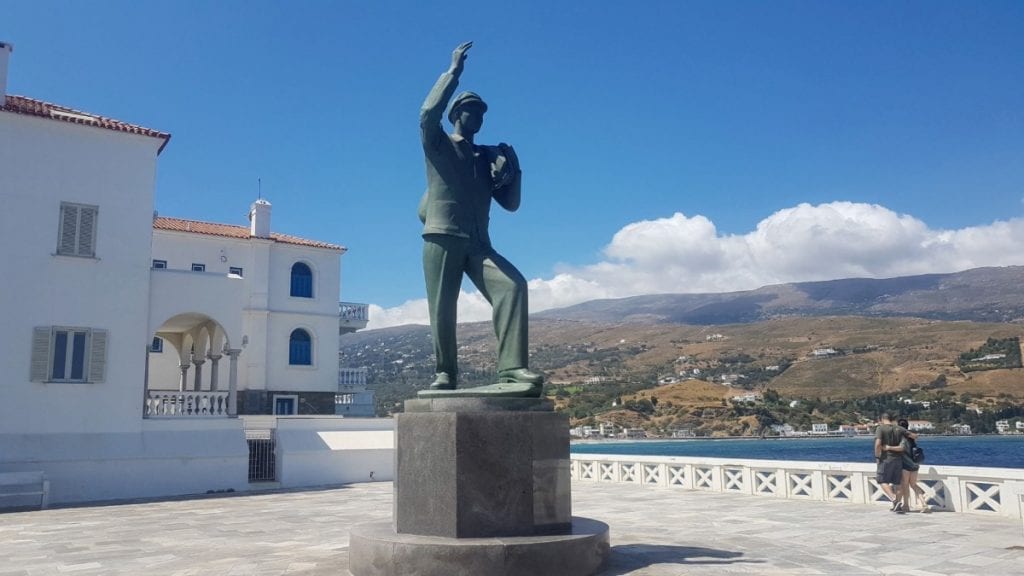 Andros and Tinos are two of the Cyclades islands, just a few hours away from Athens by ferry. They can easily be visited together on the same trip, as they are just over an hour and a half away from each other. Check our guides here:

In fact, most ferries on this route stop first at Andros (about 2 hours or less from Athens), and then at Tinos (up to a couple of hours further on).

Even though both of the islands are fairly quiet and relaxed, they each have distinct characteristics. They are also miles away (in terms of character!) from nearby Mykonos!

When to go to Andros and Tinos

The best time to go to Andros and Tinos depends on what type of vacation you are after.

Both islands have wonderful beaches if you're looking to soak up some sun, but there's also plenty of options when it comes to touring around, sightseeing, hiking, exploring, and tasting the delicious Greek food. 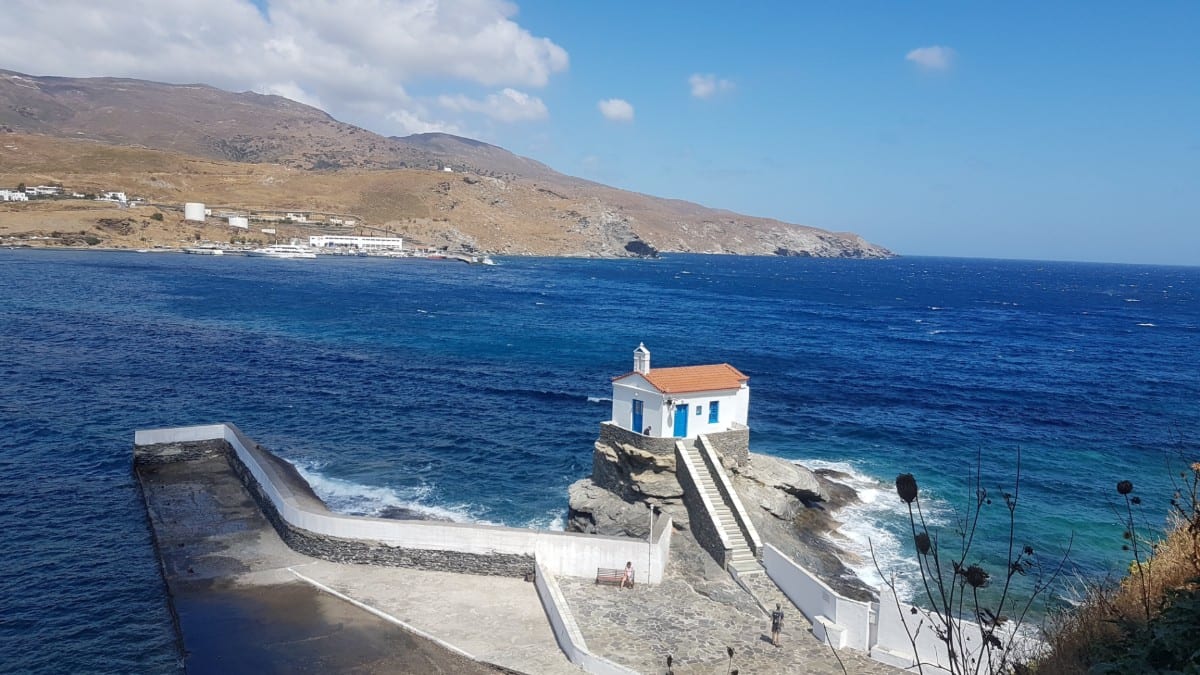 Tip – If you like unique cheeses, Andros and Tinos are paradise!

Andros and Tinos in summer

Most people choose to visit Greece in summer, and of course the Greek beaches are best enjoyed when the weather is warm. 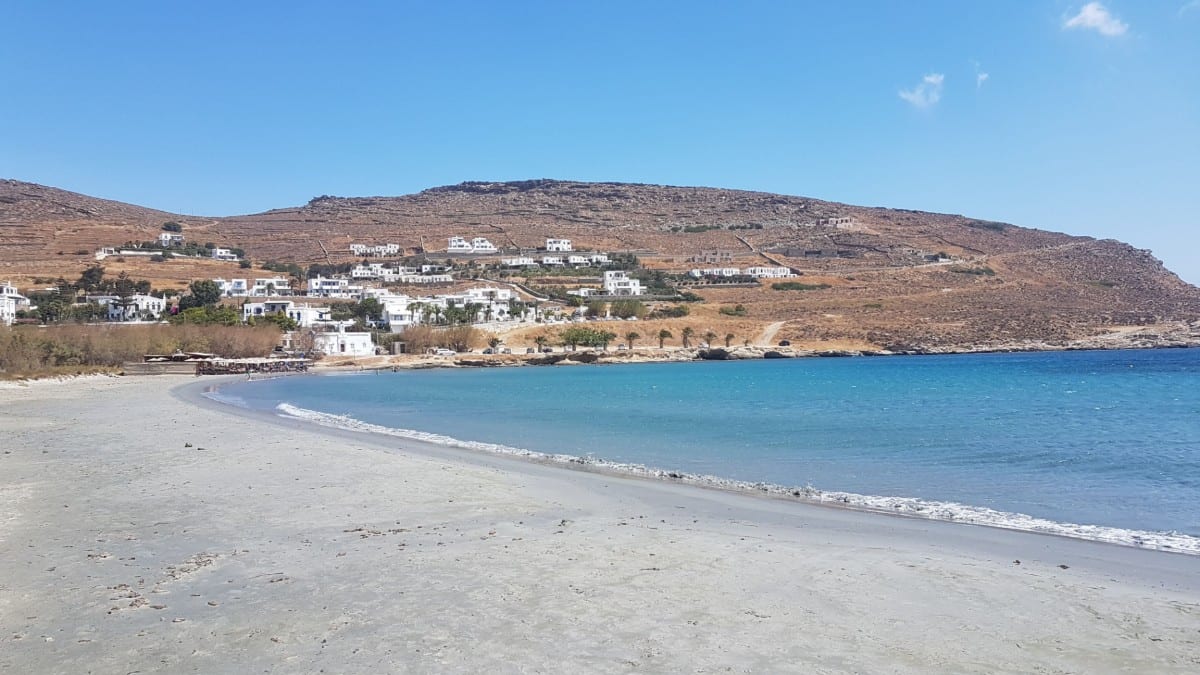 If you’ve only been to Athens or the mainland, you may be pleased to know that the Cyclades typically have lower summer temperatures in comparison.

Still, Tinos and Andros are pretty warm by any standards. Temperatures can easily climb above 30C / 86F, on the warmer days, making the sea the perfect temperature to go swimming.

If your main aim is to hit the beaches, the best time to visit Andros and Tinos is in summer or early autumn. You do need to be aware of the Meltemi winds though. These are strong northern winds which are prevalent around the Cyclades islands in summer. More on this below.

Should you avoid August?

August is a fairly busy month on both islands, just like on pretty much every other Greek island. Andros is particularly popular with Greek families during this month, as it is very close to Athens and ferry tickets are cheap. 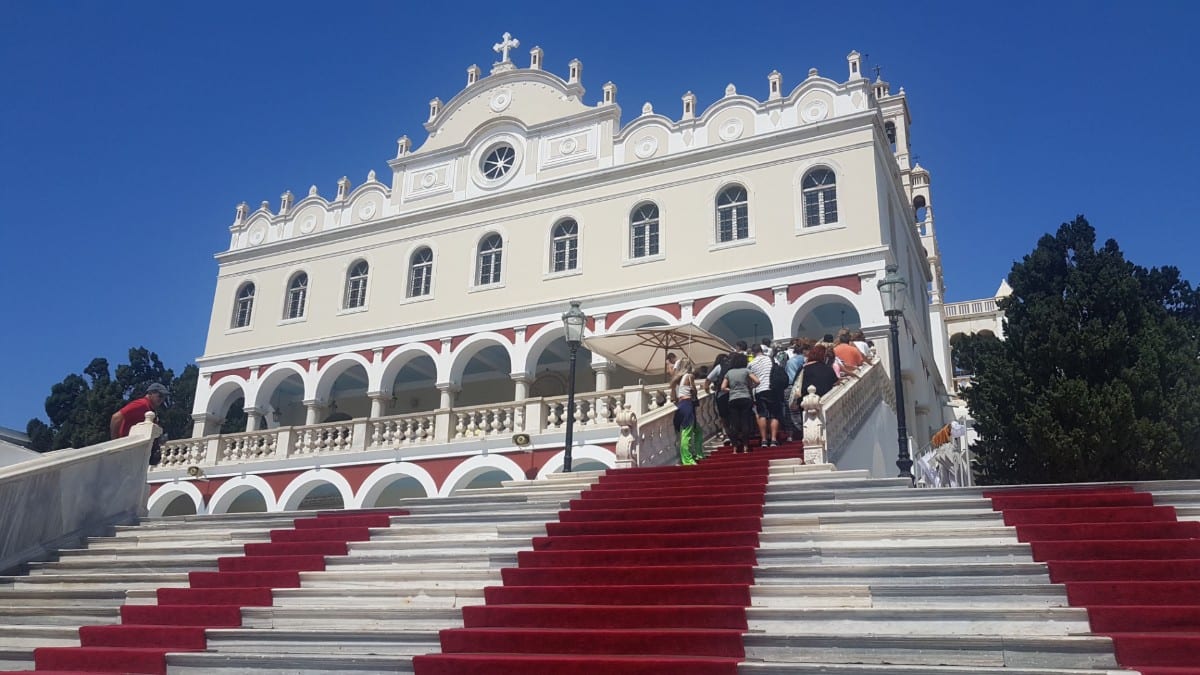 Tinos also celebrates one of the most important Greek religious days on the 15th of August. Thousands of pilgrims come from every corner of the Orthodox world to pay their respects.

As a result, the island gets super busy for a few days before and after. If you are planning to visit Tinos around that time, make sure you book your accommodation and ferry tickets well  in advance.

Tip – Whilst Andros and Tinos are not nearly as busy in August when compared to Santorini or Mykonos, you should be prepared for more people than usual. Hotel prices may be bumped higher for this peak season as well.

Check our guides on where to stay in Andros and Tinos:

What are the Meltemi winds?

If you’ve been to the Cyclades before, you will have heard (or experienced!) the Meltemi winds. These strong northern winds are fairly seasonal, generally lasting from July to August, and occasionally in the early days of September. 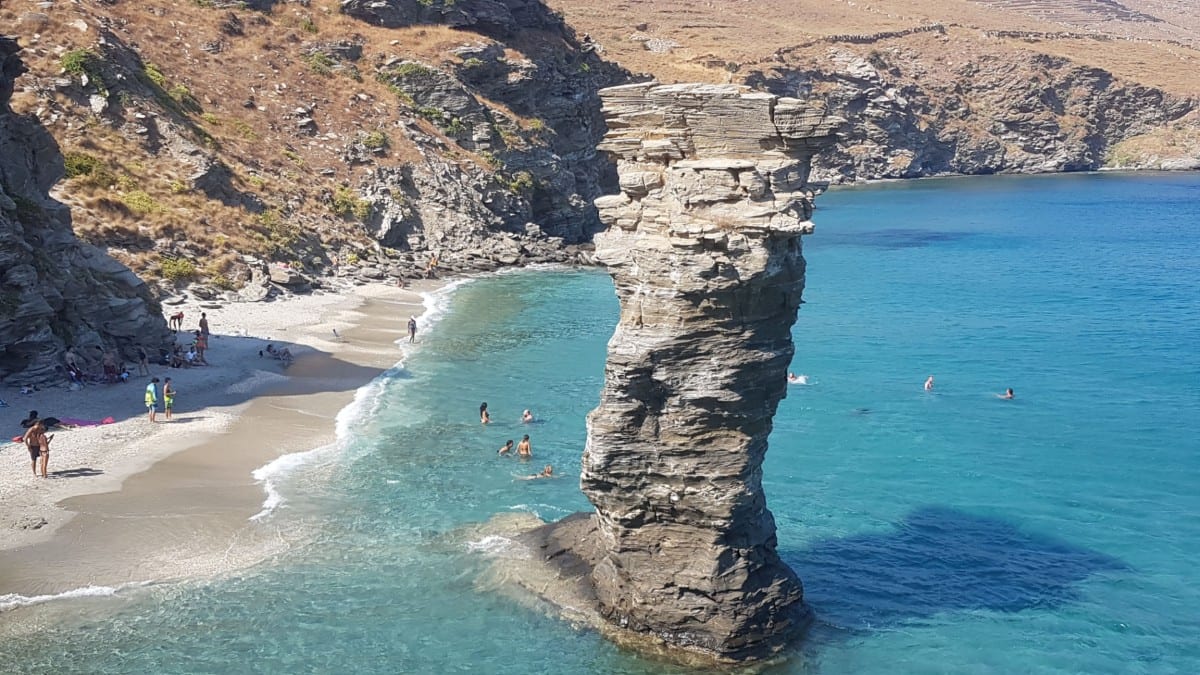 Andros and Tinos are two of the islands which are most affected by the Meltemi winds. In fact, the area between Andros and Evia island to its north has some of the strongest winds in Greece!

On particularly windy days, many of the north facing beaches may be not as relaxing as you hoped. The winds will blow up the sand, and create waves that make it difficult to swim.

On very windy days, we suggest that you avoid the northern beaches altogether and go to the ones on the south instead. Try to find the most protected beaches, even if this means you will have to drive for over a half-hour. Ask at your hotel where they think the best protected beaches are.

As Andros and Tinos are quite big, and have tons of beaches each, you will always find a protected spot to put your towel and go for a swim.

Check out our full guides on Andros and Tinos for where the best beaches are, and things to do.

Visiting Andros and Tinos in the off-season

Unlike the most popular islands, such as Santorini, Mykonos and Rhodes, Andros and Tinos have a rather short tourist season, which is basically July and August.

Even early September isn’t considered “the tourist season” anymore, and many family hotels close down after mid-September. 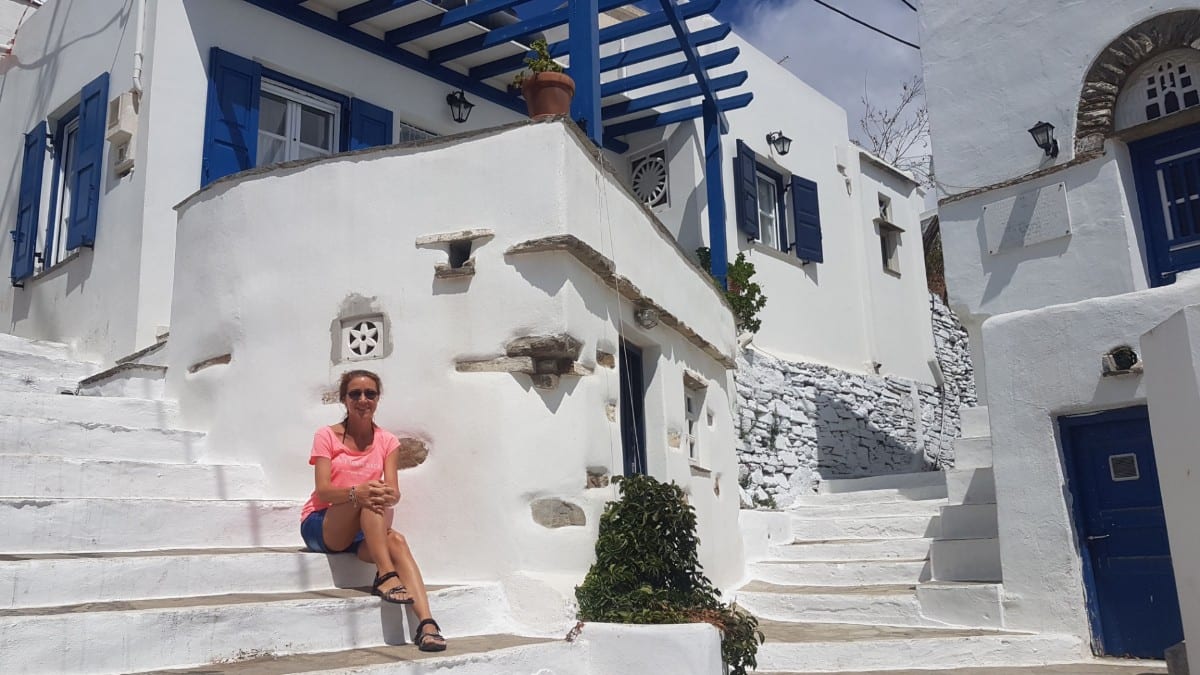 That is not to say, however, that you won’t find anywhere to stay. You can always find accommodation, and it’s totally worth visiting Andros and Tinos in the off-season. You will then find what most tourists are after – the authentic, Real Greece.

Travel tip: I think that autumn in Greece is one of the best times to take a vacation!

Things to do in Spring and Autumn

Apart from the beaches, Andros and Tinos have some pretty amazing hiking paths. Most people would find summer temperatures way too hot to go on long hikes around the Cyclades, so if your main aim is to hike, it’s best to visit during spring or early autumn instead.

The Cyclades are also beautiful in spring. Even though they are not the greenest of islands, Andros will take you by surprise. Spring is beautiful, though swimming may not be possible as the sea will still be too cold.

Finally, if you are looking for a traditional experience, you could consider visiting Andros and Tinos during Greek Easter.

Easter in Tinos and Andros

Most people try to avoid visiting Greece during Greek Easter, as the tourist attractions are closed for a few days. Very few people plan their travels around our most important religious and cultural event.

You should actually experience the Greek Easter once in your lifetime, as it’s unique. There are many Easter-related customs in Greece, and many visitors thoroughly enjoy our Easter culinary traditions.

Like mentioned earlier, Tinos is an island of great religious significance. As you would expect, Easter is very important here, and is celebrated accordingly.

On Good Friday, visit the impressive village of Pyrgos to observe the Epitafios procession. On Good Saturday, follow the evening festivities at the main Chora church, and be there for midnight, when the Resurrection happens. Then enjoy a traditional meal of mayiritsa, a hearty soup containing liver, other animal parts and a thick lemon-and-egg sauce.

On Easter Sunday, every little village in Tinos honours the traditions with religious ceremonies and music festivals. Ask your hotel owner where to go, but keep in mind to check out Skalados or even return to Pyrgos. The dish of the day is the famous lamb on the spit, accompanied by red eggs!

Finally, on Easter Monday, visit the beautiful village of Kardiani, to participate in the local fiesta with local music and traditional food.

Easter in Andros is a little louder, as one of the local customs involves quite a few fireworks and firing cannons. While a lot happens in Chora, it’s worth heading to the mountain villages to observe the Easter masses and Epitafios processions.

When to visit Andros and Tinos 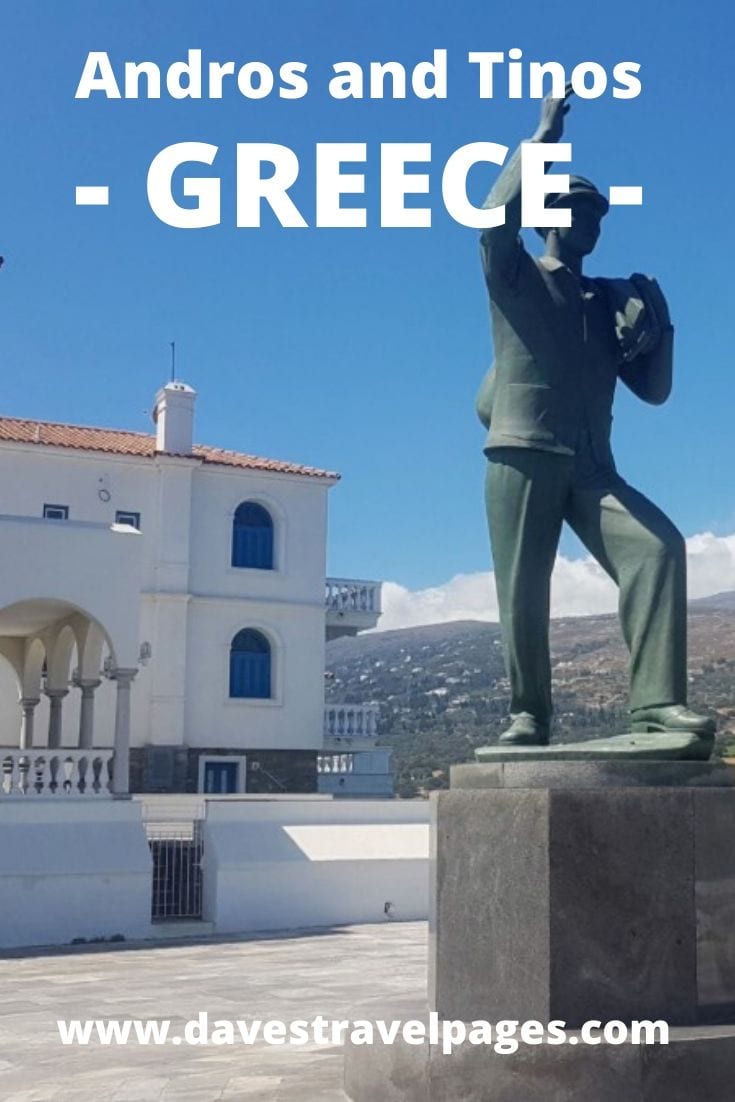 Whenever you decide to visit Andros or Tinos, one thing is certain. You will love these unspoilt, authentic Greek islands, and you will definitely want to go back!

You might also want to read: Getting from Mykonos to Andros island.