Here’s everything you need to know about traveling to Greece during the Coronavirus outbreak. This page will be updated daily at 10:00 am Greek Time. 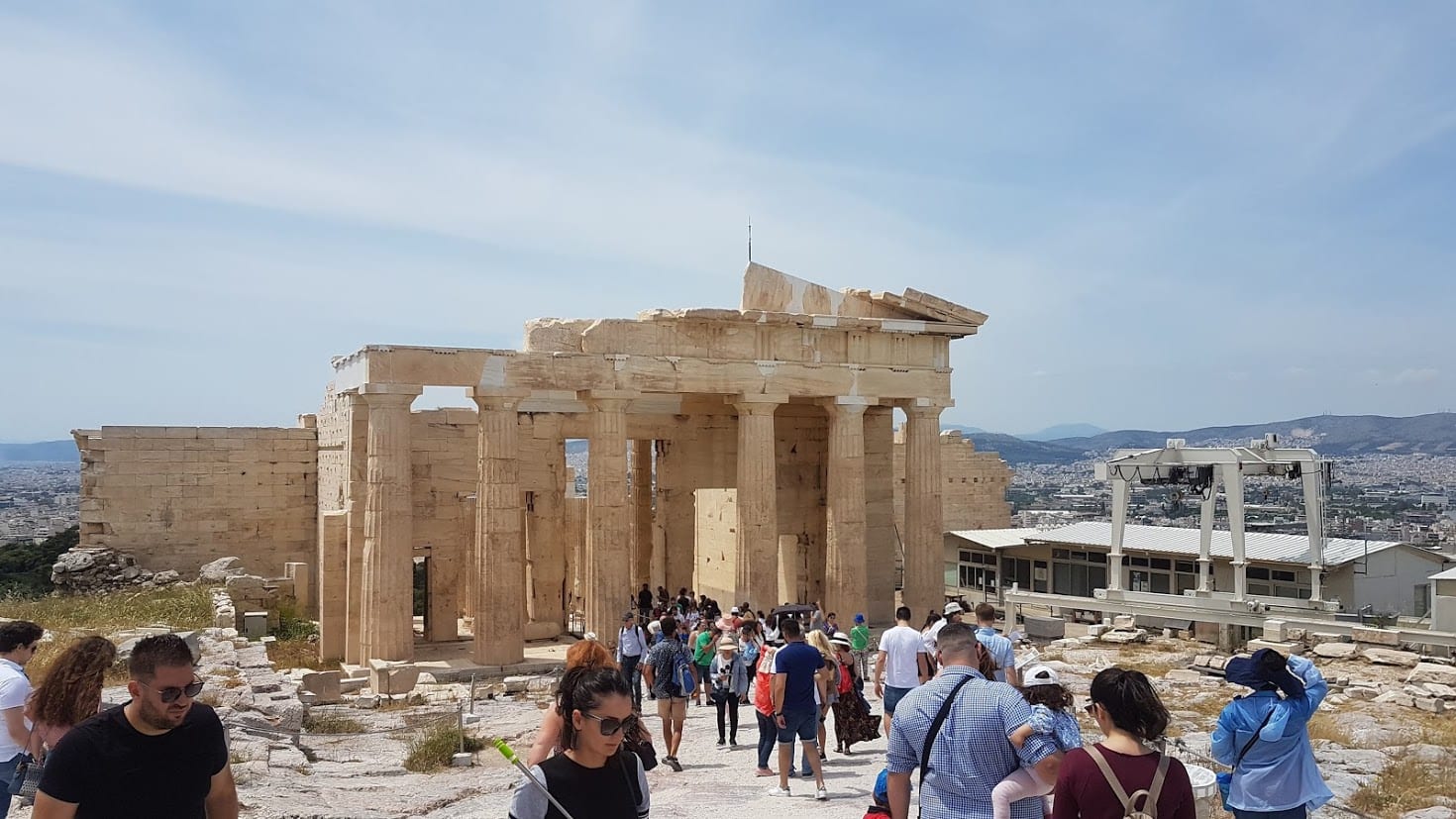 I’ve been living in and writing about Greece since 2015. During that time Greece has experienced Capital Controls from the debt crisis, a refugee crisis, and now its latest challenge – Coronavirus.

As a country, Greece relies heavily on tourism to support its economy, with many jobs and livelihoods depending upon it. To say that Coronavirus, or Covid19 is going to affect the tourism industry in Greece is an understatement.

There’s been no official figures yet in terms of cancellations and year on year comparisons, but the industry is already starting to feel the strain. People are unsure if they should travel to Greece or not, and are delaying booking or even cancelling holidays.

The purpose of this post isn’t to persuade you to travel to Greece in 2020 though. That’s a decision you’ll have to make for yourself.

Instead, I’m just going to share the latest information from official foreign and Greek sources to keep you up to date. In addition, I’ll share other information that may be relevant to people planning to travel to and from Greece.

One of the resources I’ll be drawing from can be found here: European Centre for Disease Prevention and Control. This gives a running update on the numbers of people affected by Coronavirus in Greece and in Europe.

I’ll also be using information from the UK Foreign Office as well as official sources in Greece, particularly this government page: https://eody.gov.gr/. Finally, I’ll add the occasional note myself (clearly marked) where I’ll share any insights.

I want to make clear from the start that I have no intention of sensationalizing the issue, passing on any weird conspiracy theories, or grabbing headlines. I just want to pull together as much information about how the Coronavirus in Greece may affect travelers so people can make their own informed decisions.

You'll notice that when I include figures for reported cases and deaths, I also include the numbers for the UK and USA. This is because the vast majority of readers come from these two locations, and you might find it useful to make comparisons.

Readers should also note that Greece has over 200 inhabited islands. Where possible, I will include the cities and islands in Greece where Coronavirus has been discovered. No promises though!

Are there any entry and exit restrictions for travel to Greece?

– Anyone arriving in Greece now needs to go into self-isolation for a period of 14 days. Non-compliant people will be fined.

Are there any local restrictions in Greece because of Coronavirus?

The following measures have been put in place by the Greek government. There have been rolling changes, but this is the latest as of 14th March 2020:

The following places will remain closed:

The Greek government announced that hotels around the country would be closing, apart from 1 each in regional capitals, and 3 each in Athens and Thessaloniki.

There has also been talk of flights to and from Greece being stopped, but no official announcement has been made (despite newspapers already reporting it).

Greece is still maintaining a policy of social responsibility, where people are encouraged to be sensible and police their own social distancing. Not everyone is playing ball though, and so today, the government put a new guideline in which limits people gathering in groups of more than 10.

Dave's observation from the day: Although I usually work from home (when not actually traveling), it does feel a bit different. This is because of the never-ending news cycle I suppose, and the feeling I should always ‘find out more' about the situation.

The aim over the next few days, is to establish more of a routine so I can get some work done and workout regularly. Additionally, I'm also going to try doing ‘1 new thing a day'. Today, it was making my own pita bread. It turned out very well! 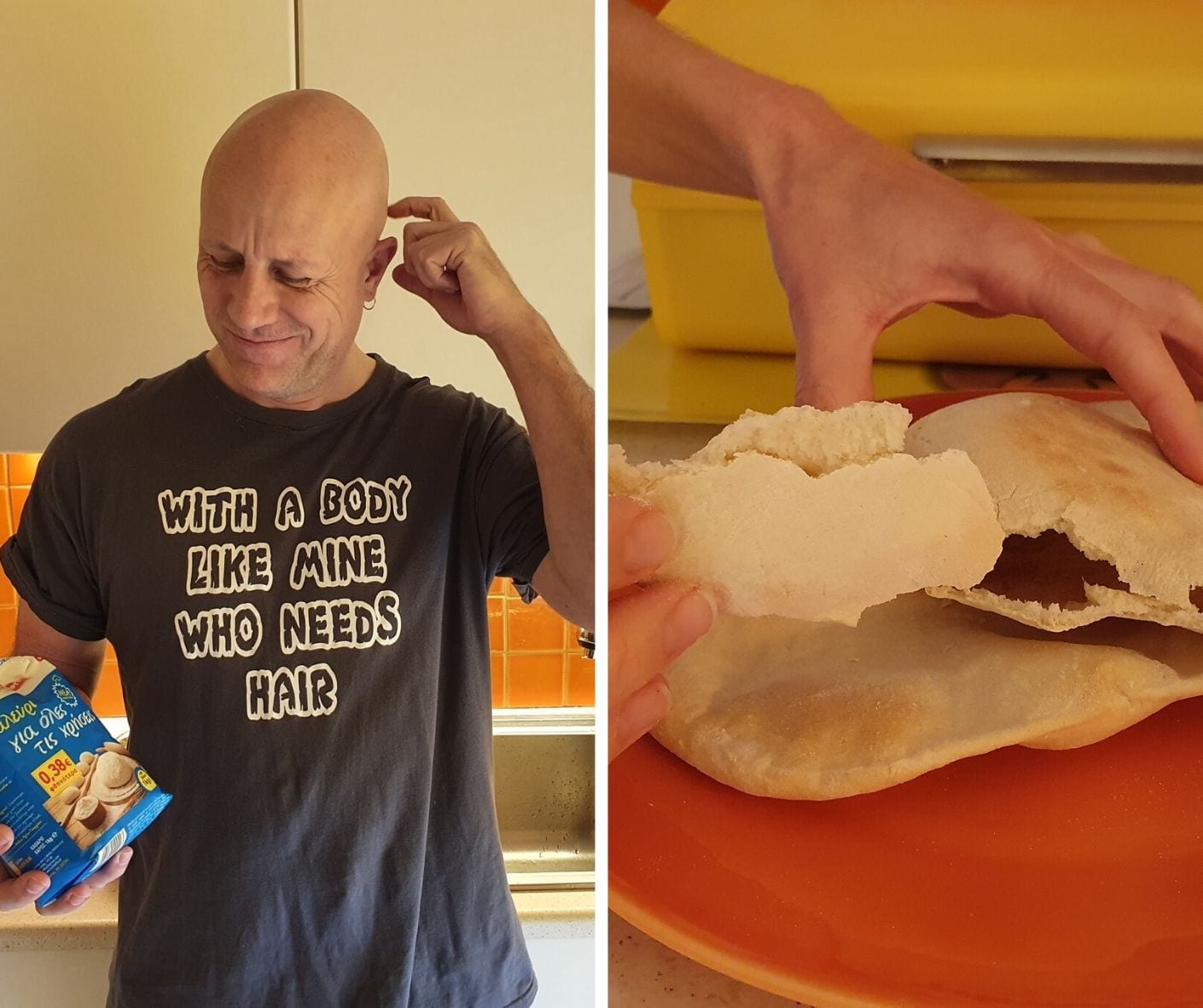 The biggest news from the day, is that Greece has closed its borders to all non EU citizens.

“Citizens of non-EU countries will not be allowed to enter our country from 6am tomorrow, except for an absolutely necessary condition related exclusively to emergency work or family,” head of Civil Protection and Deputy Minister for Crisis Management Nikos Hardalias announced.

In separate news, masses in Greek churches will no longer be allowed to go ahead.

The following businesses will be allowed to operate as from tomorrow: 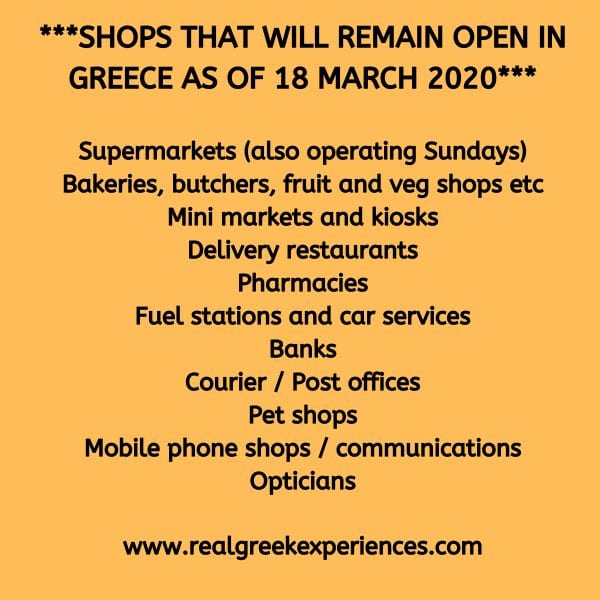 Dave's observation from the day: It seems that Greece has gone early with closures which are currently keeping infected rates down. In the UK however, it's a different story.

There appears to be a lack of leadership, and the numbers do not look good. In most people's eyes, they've left it too late in terms of closing movement down. My feeling is they will have an overwhelming number of cases needing ventilators in intensive care within the next two weeks. Very worrying!

Most important news of the day so far: As of Wednesday 18th March all shops to close except supermarkets, pharmacies, petrol stations and banks. Self quarantine for 14 days for all arrivals from abroad.

The announcement can bee seen here (in Greek):

Dave's observation from the day: We are expecting a major announcement tonight, which will be in part based on the church's decision on shared rituals etc. There's no need for me to speculate though, I'll update more when the announcement is made.

Source: http://www.ekathimerini.com/250665/article/ekathimerini/news/further-restrictions-to-travel-cruise-ships-banned (and its Greek version where there is some more info)

Late on Saturday 14th March, the government has decided the closure of seasonal hotels and similar establishments. The measure is put into immediate effect from 15 March to 30 April. Hotels that are already open will need to close by 23 March to April. Source www.et.gr

Organized beaches and ski resorts are also to remain closed as of 15 March, as announced by the PM on his twitter account. 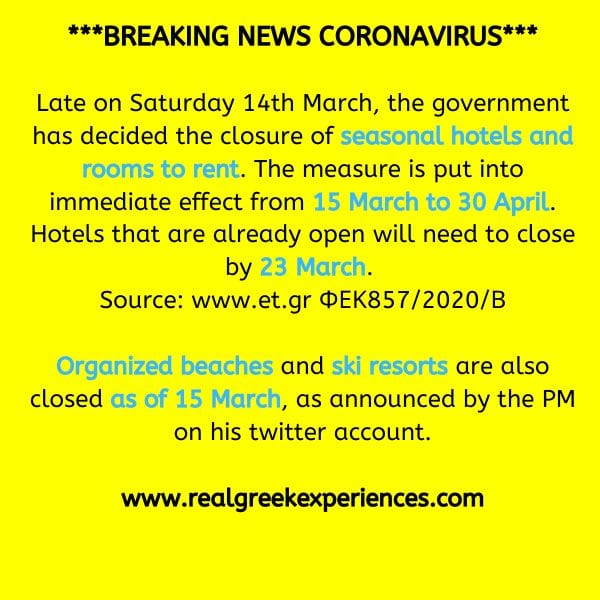 Update 10.15: A lot happened yesterday in terms of announcements, which you can see from the 18.50 update I made on the Corinavirus situation in Greece below here.

One question we were asked on our Facebook page was if the laikis (Local street markets) would still be open. We had two readers contact us this morning to say that Kalindromiou market was open as usual this morning. If this changes. we'll let you know!

Dave's observation from the day: The Greek government has a solid plan in place, which is based on social distancing in order to slow the spread of the virus. The challenge is going to be getting the church on board with this plan.

I understand there will be a meeting of the heads of the Greek church on Monday in order to discuss their plans in terms of keeping churches open and shared rituals.

Update 16.45: We took the chance to go to the beach today. I know this sounds kind of terrible given what is happening, but hear me out! Firstly, we went in the car and had no social interaction in public transport. Secondly, the beach is out in the open air, and there was plenty of space. Thirdly, with how fast things are moving, who knows when we might go to the beach again? 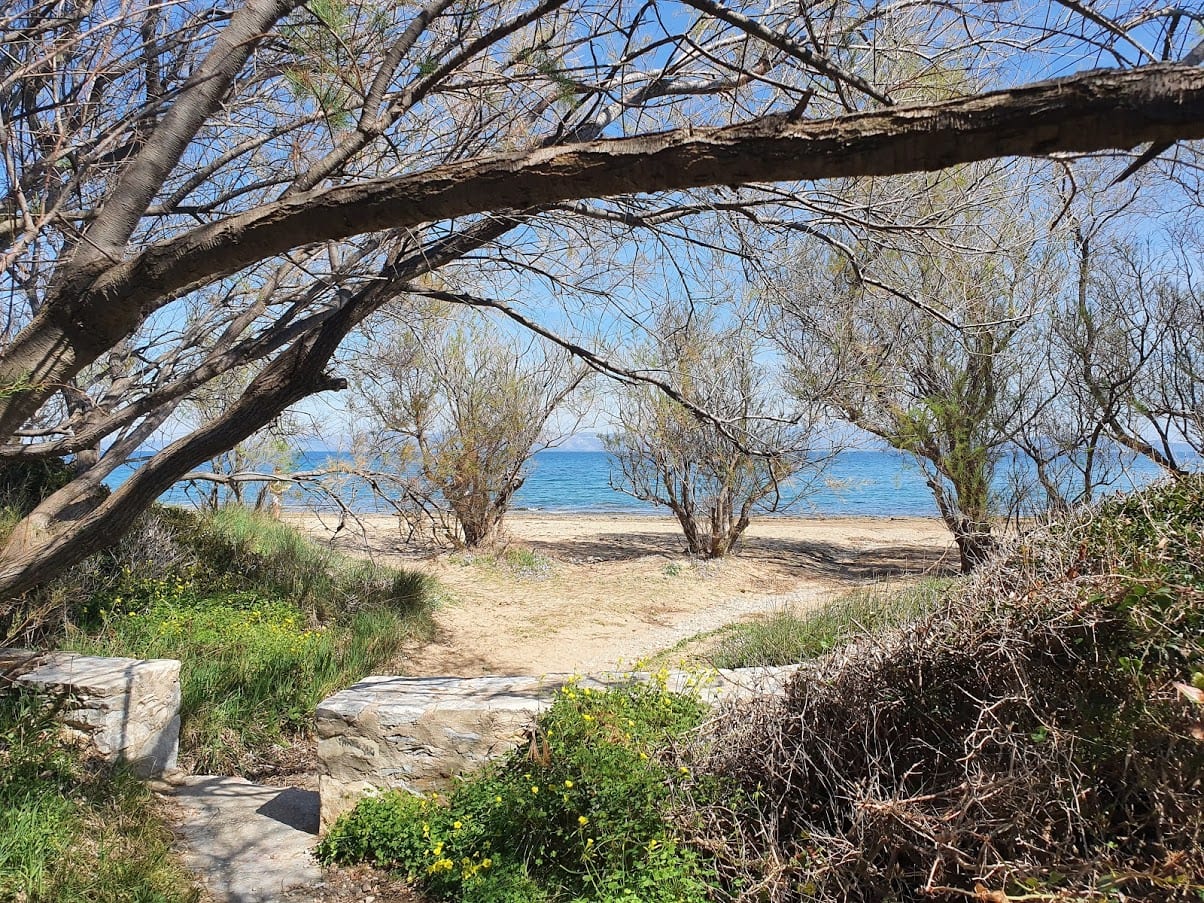 The government has decided further closures all around Greece. The following places will remain closed:

We will be posting further updates during the day.

Update 16.30: All archaeological sites and state museums will now be closed until 30th March. Announcement by the Ministry of Culture in Greece: Culture.gr

There were a few announcements since the last update I made yesterday that may affect visitors in Athens and Greece:

The municipality of Athens has decided to close down all their cultural spaces. The best known ones are the Technopolis in Kerameikos and the Municipal Gallery in Metaxourgio.

All other museums operate as normal, however employees have been advised to only allow certain numbers of people in, at any given time.

Archaeological sites all over the country will keep operating as normal until further notice.

Apart from schools and universities, the government has also decided the closure of gyms and similar institutions, playgrounds, as well as cinemas, theatres and certain late-night entertainment venues. Courthouses will be closed down as well.

Source for the above information at the official City of Athens site.

The government is also starting  a campaign to encourage people to stay at home if they have any symptoms and call 1135 which is the special hotline. The logo is below, which translates as ‘We are staying at home'. 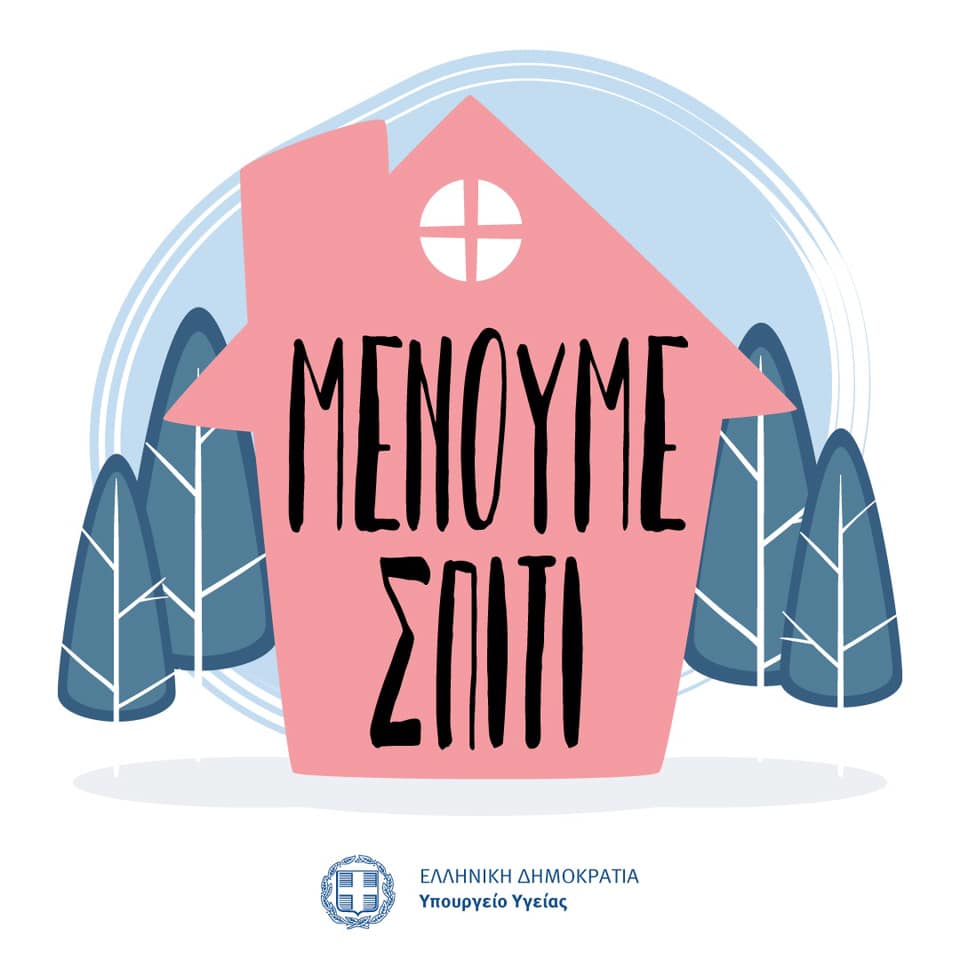 The Greek government has taken several proactive steps in preparing for the Coronavirus in Greece. These include limiting any surgeries in public hospitals that are not urgent. Emergency cases will still go ahead as normal.

In addition, they also sent out an SMS to people's phones using the Emergency Alert system. I've taken a screenshot and put it below – Made all the more surreal because of my Avengers Endgame Theme installed on the phone! It wasn't deliberate, I assure you!

Dave's observation from the day 10.20 12th March 2020 – The Greek government has been very proactive in their measures so far.

The Prime Minister also gave a nice speech about the issue I mentioned a couple of days ago concerning shared rituals in the Church. You can see an English report in this article: Individual Responsibility and Covid 19.

Note – This newspaper article also mentions that 2000 extra health employees will be taken on. However, as far as I can tell, this was announced on the 24th of February and could possibly have been part of regular government policy anyway.

After writing yesterday's daily update, news came in that the schools, universities and day care will be closed in Greece for the next two week starting Wednesday 11th March 2020.

Vassilis Kikilias, the  health minister, was quoted as saying by Reuters:

Now is the time for all Greeks to show personal responsibility. All schools will be closed for 14 days to help reduce the spread of coronavirus in the community.

Dave's observation from the day 10:10 AM: I've heard through friends that some public sector employees will be allowed to work from home. For anyone that understands Greek bureaucracy this is almost revolutionary!

On a serious note, this will help parents look after kids. It's also not unusual for some workers to take kids to the office if no other type of day care is available.

A question that's come up in the comments, is to try and find out which Greek islands have cases of Coronavirus. I'm working on finding a reliable source of information, so watch this space!

Dave's observation from the day: The local news is focusing on how the church has said it would continue with shared rituals such as Communion. The upshot being that it appears the church is invoking religious belief over scientific advice (the advice being to discontinue shared rituals such as communion whilst the Coronavirus in Greece is still being contained). Thankfully, I don't speak enough Greek to fully understand it all, so I'll keep out of that one!