Last Updated On November 12, 2022 by Dave Briggs Leave a Comment 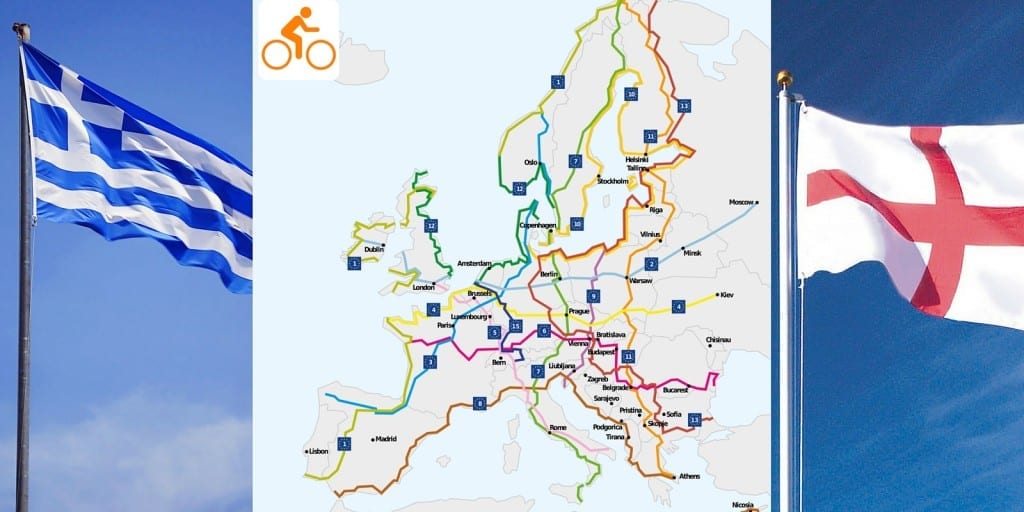 Choosing a Cycling Route from Greece to England

When planning my long distance bicycle tours, I tend to use a number of resources.

I love reading bicycle touring blogs of course, as it is a great way to get information from people who have actually cycled similar routes themselves.

Google maps is awesome, cycling guides where available are very useful, and there are cycling association websites which all provide great information.

When choosing my cycling route from Greece to England though, one of the biggest helps was the EuroVelo website. 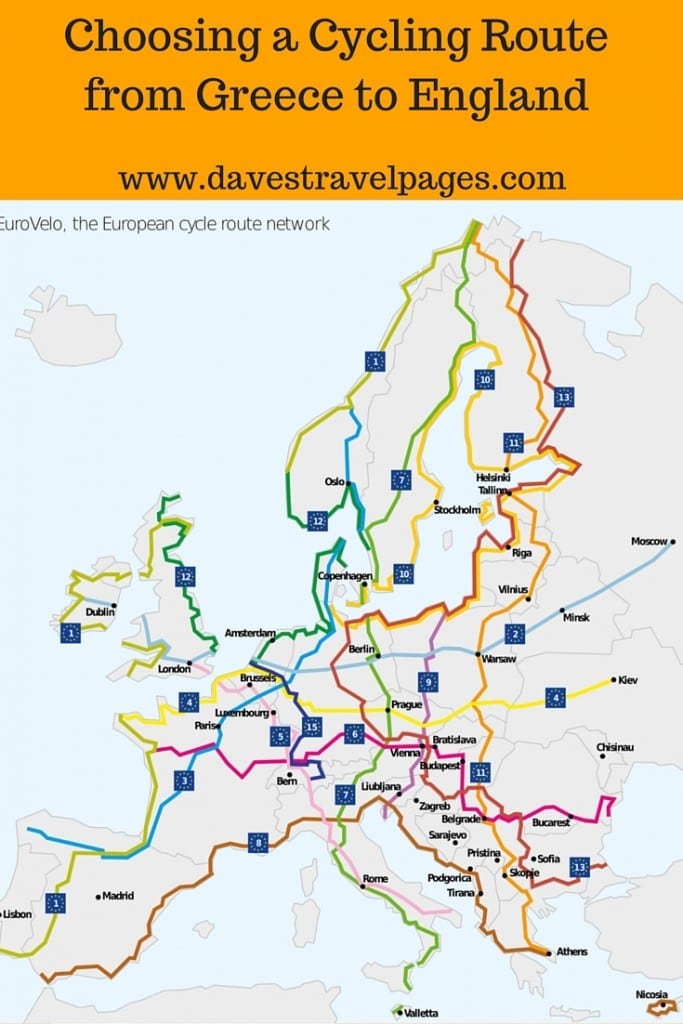 The EuroVelo project aims to develop a series of long distance cycling routes throughout Europe. These routes use local cycle paths where available, and quieter roads where not. Each one has a theme, or purpose. The current list of Eurovelo routes across Europe is:

My cycling route across Europe

When choosing a cycling route from Greece to England, it was obvious that no one single EuroVelo route would be suitable.  I would have to combine different ones, especially if I wanted to see the best places in Greece.

From my starting point in Athens, there were two routes to choose from.

One is EuroVelo route 11, and is affectionately known as the Beast from the East. Whilst the entire route runs from Athens to Nordkap in Norway, it might have been possible to cycle part of the route, before ‘jumping off' onto another one. It wasn't the most direct route though, and so I had to discard it. That said, I have bookmarked it as a potential bicycle touring trip in 2017!

The second EuroVelo route which starts from Athens, is EuroVelo 8. This is known as the Mediterranean route, and actually goes all the way to Cadiz in Spain. Obviously, I wouldn't follow it all the way through, but instead leave the route in Slovenia.

This was a perfect match for me, as it would take me to a few countries I haven't yet visited. I could then also combine this with parts of EuroVelo routes 6, 7, and 4 to complete most of the journey. 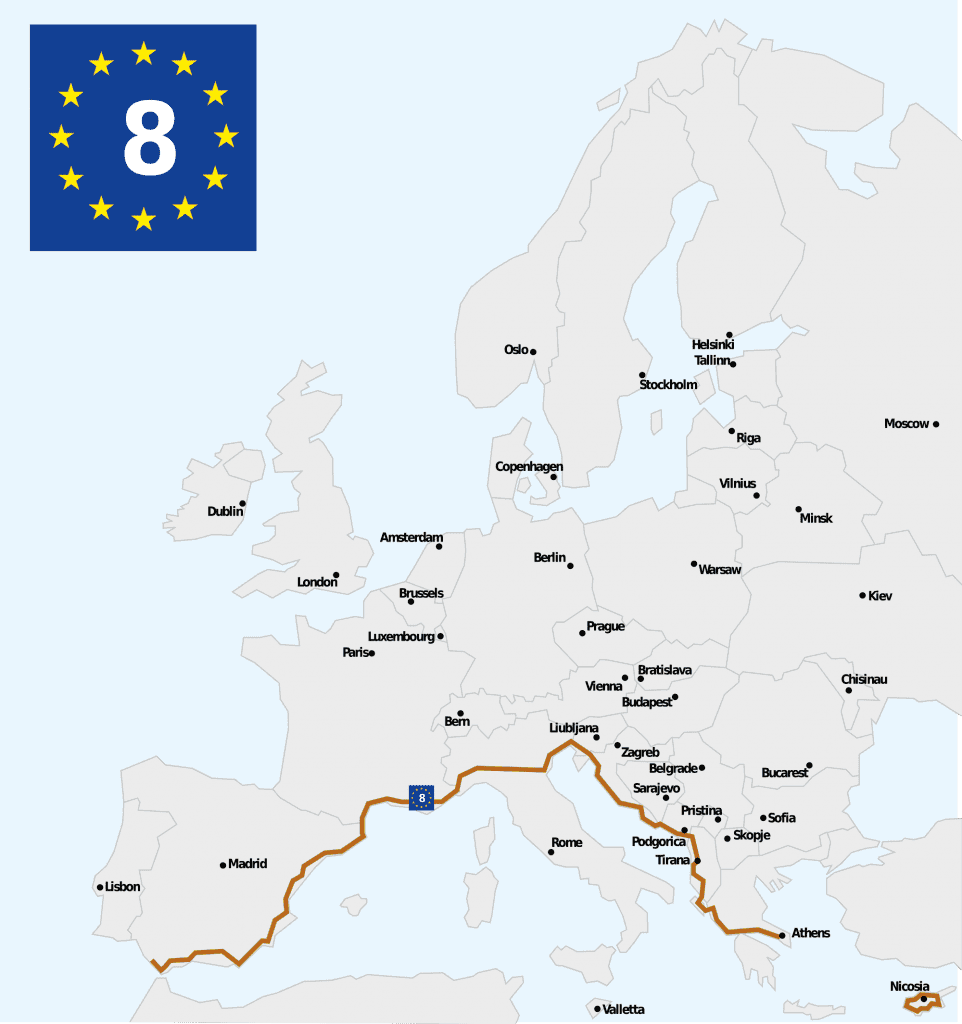 This is where I ran into a bit of a problem. It seems that whilst the EuroVelo route project is a very ambitious and noble one, not much actual routing has taken place!

When I started looking for specifically detailed maps of the routes, there were very few to be found. There is no official ‘guide book', and most of the routes are not signposted or marked in any way.

In short, it seems to be very much in the concept stage, at least for some of the sections I wished to cycle.

In the end though, I did come up with a route for cycling across Europe:

This is my bicycle touring route from Greece to England. I started my trip in May 2016, and arrived in England in July. Read on to find out about the route and the countries I am cycled through.

My Bicycle Touring Route From Greece To England

When planning my bicycle touring route from Greece to England, I had some considerations to keep in mind.

The first, was that the time I could spend cycling was limited to a couple of months.

The second, was that I would like to cycle through some of the Balkan countries I had never been to before.

The third, was that the route needed to include some cities that the Mrs could fly to in order to meet me a couple of times during the trip.

The resulting cycling route from Greece to England takes all that into account. 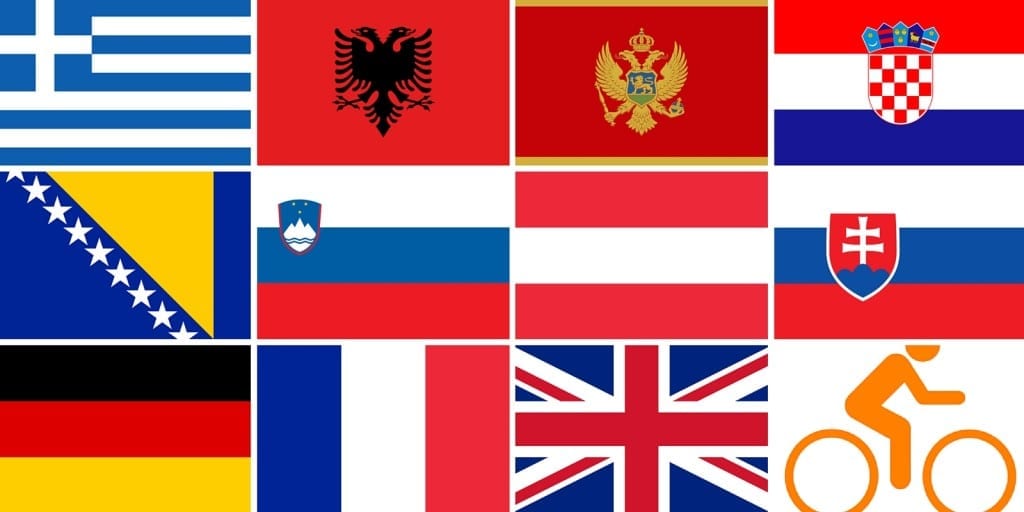 Note – When I am actually cycling, I will be navigating using a mix of GPS, maps, and asking people for directions. You can read a previous article I wrote about it here – Bicycle Touring Navigation.

I planned the bike touring route across Europe using a combination of Garmin Connect and Google maps. I found Garmin Connect useful because it gave elevations of sections of cycling.

I have included the Garmin Connect routes down below. NOTE: These maps can take a while to load so please be patient! I think the information in them is worth the extra few seconds to wait 😉

Cycling Through Greece – My route

-This is a 10 day stretch of cycling, which will take me up the west coast of Greece

. I tend to average 80 kms a day when bicycle touring, but the first 3 days average much lower.

This is so I can gently ease into the tour (if there is such a thing!). Day 4 is the longest day of this first stretch, where I need to cover about 100 kms.

Due to several commitments en-route, (such as reviewing accommodation and meeting up with the Mrs), I need to keep to my schedule as much as possible.

Cycling Through Albania – My route

This is a country I really want to spend a great deal of time in bicycle touring, however on this trip, I will need to cycle through it pretty quickly.

In fact, reviewing my route, I am a little concerned that I have been a touch over-ambitious in what I can achieve here in order to make my deadlines.

Still, I love a challenge! I have previously visited Albania

, and you can read some of my blog posts here – Dave's Travel Pages in Albania.

will be the first ‘new' country on my bicycle touring route from Greece to England. Not that I will be there long on this occasion. There's an interesting guide here on cycling routes in Montenegro.

It is also split in two by a narrow strip of land connecting Bosnia and Herzegovina to the sea. Before that happens though, I reach the city of Dubrovnik, where I spend a couple of days with the Mrs (I should really stop calling her that, but I just can't help myself!).

Cycling Through Bosnia and Herzegovina

I'm not sure how much the short strip of land is that splits Croatia, but I think it's about 20 kms. I can hardly claim to be bicycle touring in Bosnia and Herzegovina

I enter Croatia once more, and continue cycling along the coastal roads until I meet the border with Slovenia.

Over the past few years, Slovenia

has been marketing itself as a destination for outdoor lovers, with a particular emphasis on bicycle touring.

It will be quite interesting to see some of the cycling routes they have come up with, and to travel through what will be another new country for me.

Along the way, I am due to stay at a luxury campsite for a couple of days in exchange for reviewing it. I am quite looking forward to that!

This is an initially short stretch of cycling in Austria

. had to include it here though to keep things nice an accurate!

When I reach Bratislava, I get to take 10 days off  my cycling route from Greece to England! The Mrs is flying out to meet me, and we will spend a few days in Slovakia

Hopefully I can find somewhere to keep the bike for this time, as we will be travelling either by train or bus.

Back on the bike once more, and from Bratislava in Slovakia, I cycle to Vienna in Austria. At this point, I begin to retrace in reverse a route I took almost 10 years ago when cycling from England to South Africa.

For the Austrian section, this follows much of the River Danube Cycling Route, one of the most famous long distance cycling routes in Europe.

I was very impressed with the network of cycling routes in Germany the last time I cycled there, and am looking forward to more of the same.

At this stage, the only deadline I have to meet, is to catch a flight back from England to Greece at the end of July. Although I have mapped out some stages along the way, I can be a lot more flexible.

This is the homeward stretch, and I think at this point I will be mainly thinking of cycling to England a quickly as I can so I can indulge in some guilty pleasures such as fish and chips, and a full English breakfast!

Again, I can be reasonably flexible with the route and times, although this is the current planned route.

, I will be taking a ferry!

Once back in Blighty, it's a few day's cycle to Northampton which marks the end of my journey. 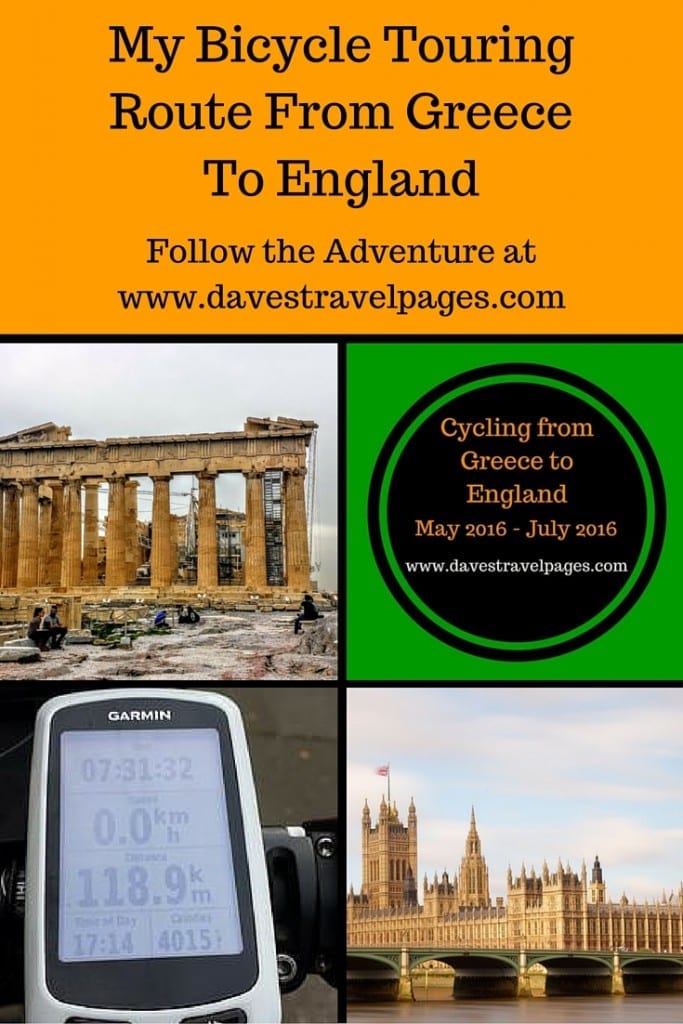 For more information on the bike tour, take a look here – cycling from Greece to England.

Here's some popularly asked questions about the Greece to England bike tour and planning a route:

Is Greece good for cycling?

If you're planning to cycle the Greek islands or mainland, you should know that dedicated bicycle lanes do no exist. The good news, is that quiet country roads away from the cities are excellent for cycling in Greece.

What is the Greece to England distance when cycling?

The rough distance between London and Athens when cycling from England to Greece is about 3200 kms.

Is wild camping allowed along cycle routes in Europe?

Technically, it is illegal to wild camp in the countries on the Greece to England route, although in practice, wild camping in quiet places out of sight is one of the joys of traveling on two wheels!

How many rest days do I need on a bike tour?

Everyone has their own rhythm when touring, but when I plan trips, I tend to have 4 or 5 days cycling, and then one day off in order to give my body time to recover. On long tours, I might also take a week off every 6 or 7 weeks depending on my schedule.