Last Updated On January 13, 2020 by Dave Briggs Leave a Comment

This blog post was written by Cat as part of her bike tour across Europe following the Eurovelo 8 route. It covers thoughts on Assisi as well as some plan and route changes.

I’m afraid that in this week I’ve failed you all miserably. I haven’t seen any sights, I haven’t followed any of the recommendations of hosts or travellers to hike to wonderful places or explore nearby towns. I have very little to write about!

On the other hand, I have let myself relax, enjoying the care and company of my dear friend here, repaired my bicycle and made some key decisions. My change of plans will shape the next six months. So it’s not been a waste at all.

Assisi is both a place of remarkable serenity, prayer, and tradition, and a religious tourism supermarket. The small town boasts two basilicas, one cathedral and somewhere around twenty churches.

The surrounding area is divided between more monasteries and convents than I could tally easily, filled with monks and nuns still living a very medieval cloistered life. In this sense it is a fascinating place, regardless of personal opinions regarding religion.

The music of bells wafting on the air followed by the harmonising voices solemn choirs makes my skin tingle. Cashing in on the vibe are the countless little stores selling all manner of religious souvenirs, from monk-shaped salt and pepper shakers (handmade by local nuns and monks!) to actual sacramental chalices and tabernacles that would certainly be conversation starters sitting on the mantlepiece, but I think not good taste in interior decoration. Either way, for all things saintly and religious, Assisi is the place to be.

My favourite aspect of Assisi is it’s natural and architectural beauty. When riding across the flat, lush, green valley on the SS147 from Perugia, Assisi all but floored me when it sprang into view. 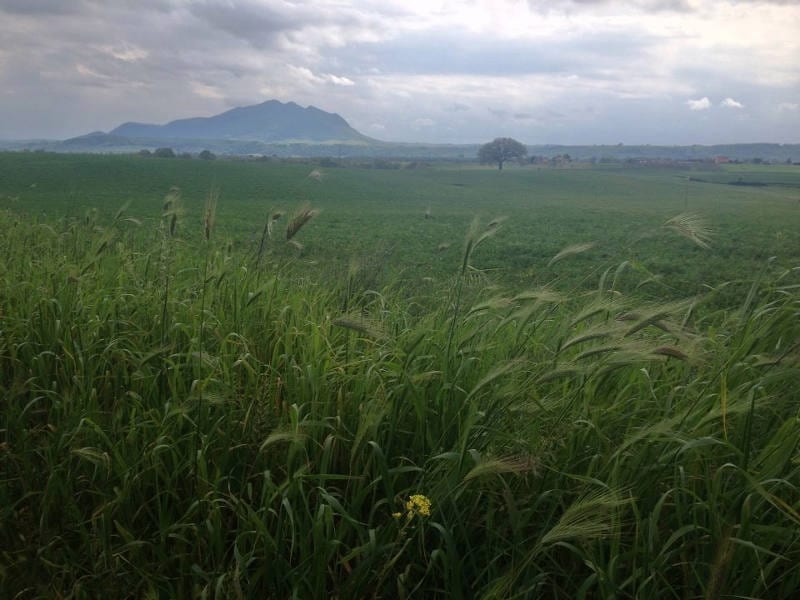 Nestled at the foot of a little mountain, the town was illuminated in the sun, its pink-and-white towers, domes, walls and arches shining like a fairytale apparition against a backdrop of deep green and blue. Literally topping off the spectacle was a castle crowning the mountain.

Once in Assisi, at any given point a gap between ancient stone buildings, an open terrace, or a high balcony presents views looking back down on the valley of farms, orchards, gardens, and the signature dome of the basilica known as the Portsiuncula (a third, not strictly in Assisi), enclosed and guarded by a standing army of mountains.

Hazy colours in the morning mists, vivid hues during the day, and burnished golds and greens under the setting sky, with distinct rays of sunlight at all hours of the day, I could watch that valley for the rest of my life and not ever tire of it.

I rode the twenty kilometers to Foligno, a major town in the valley, and then another ten or so to Declathon, a sports supermarket. All I needed was brake pads but I used the excuse to get out for a solitary ride.

The valley was a beautiful place to cycle, carried or impeded by the wind, depending on my direction. I had been told to visit Spello, a town much like Assisi but quieter, smaller, and free of tourists.

I had also been recommended to hike up to the castle at the top of the mountain, and to the various forts nearby. All of these things I would have loved to do, but somehow my days were pleasantly just busy enough and I didn’t get around to it.

Side trip to Rome

I did however get to Rome. My friend and I took the train to where he was giving a lecture on philosphy. I joined the students and found the class very interesting.

Afterwards I had the guided tour of most of the most worthwhile places in Rome. Maybe because I arrived by train and took a bus, and therefore my first impression was tainted by exposure to essentially generic public transport, but to me Rome felt indistinct from other major western cities such as New York. Other than the obvious monumental fountains, ancient wonders and abundance of beautiful churches of course.

That's not to say that it didn’t feel exciting and rich with interest, it certainly did. It’s just that other cities that I’ve visited in Italy have each had a more distinctive feel to them. I expect I will return to Rome to spend more time, but not on this trip.

While in Assisi I assessed my timetable, given my limited 90 day Schengen visa of which I’ve already spent more than a third, the impending summer and my budget.

I’ve decided to simply ride to Naples and Pompeii, and then up the Italian coast to Civitavecchia where I’ve booked a ferry to take me to Barcelona. Riding time included, that takes me to Spain on 1 May, giving me a month to cycle around Spain, Portugal, and up to France near Paris where on 3 June (my birthday!) I will be volunteering to serve on a Vipassana meditation course.

After that, Schengen kicks me out and I cross the English Channel to escape to the Queen’s soil. So all things considered, the ferry makes sense. I hope it doesn’t upset anyone that I’m not strictly cycling all the way there!