Last Updated On February 8, 2023 by Dave Briggs Leave a Comment

When people talk about the Meltemi winds in Greece, they refer to the strong dry north winds that blow in July and August across the Aegean Sea. This blog post will cover how Meltemi winds may affect your vacation, and what you should consider when they're present. 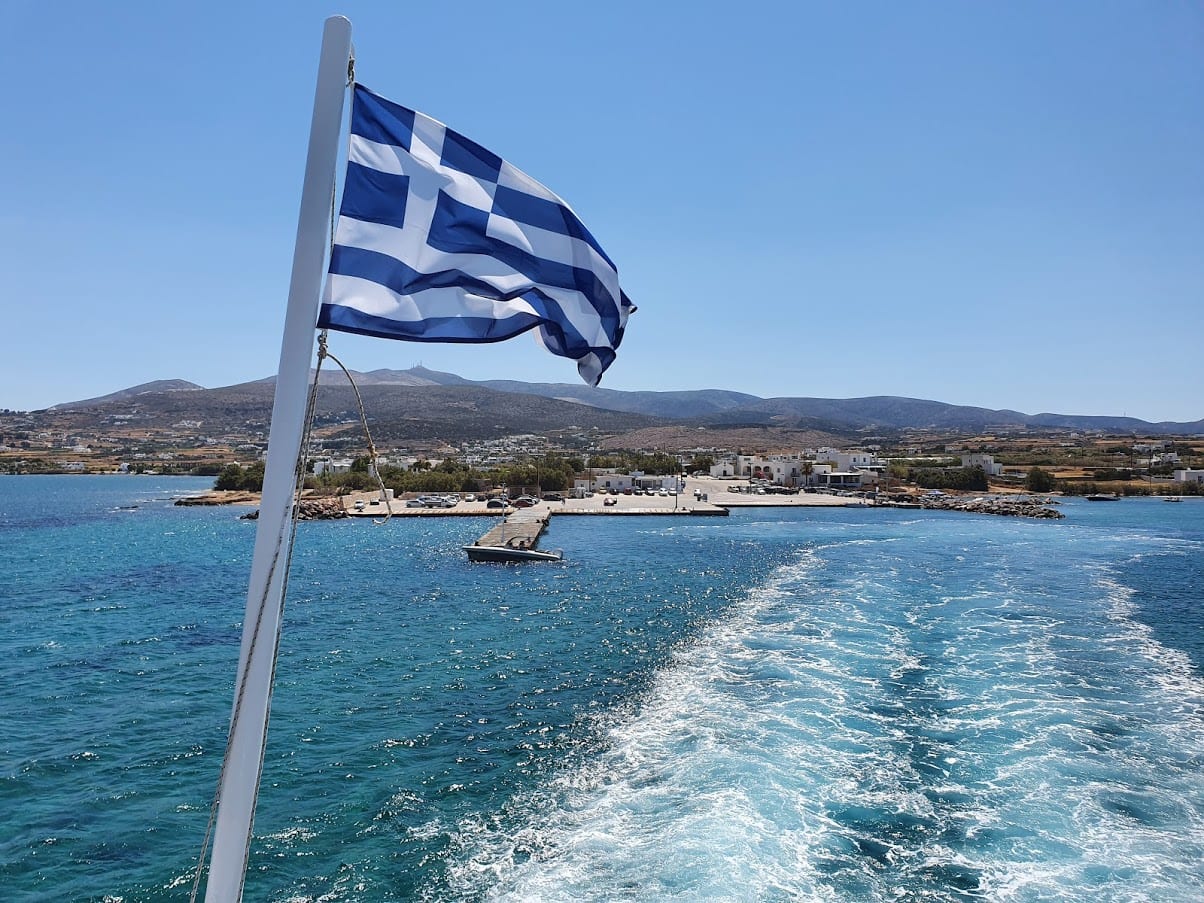 The seasonal Meltemi winds of Greece are a hot and dry wind that blows from the north of Greece across the Aegean Sea. This natural phenomenon occurs yearly, which is why you may sometimes hear it referred to as Etesian Winds (not by Greeks though!).

The Meltemi is created by atmospheric pressure differences between Europe and Africa, as well as different temperatures across the Mediterranean Sea.

The wind starts blowing from the north across the seas, and because there is little to stop it, the wind builds up quite some speed before it reaches whatever islands are in its way.

July and August Winds in the Aegean Sea

Although the Meltemi blows most strongly in the months of July and August, you can expect these northern winds to blow anytime between June and September.

At their peak, the wind speed can reach between 7 and 8 Beaufort, sometimes exceeding 120 km/h.

This provides something of a mixed blessing, as it helps to reduce the very high summer temperatures experienced in parts of Greece, but it does make sitting on a beach a little tricky!

If there is a high wind warning and strong wind forecast, ferries may occasionally be cancelled. 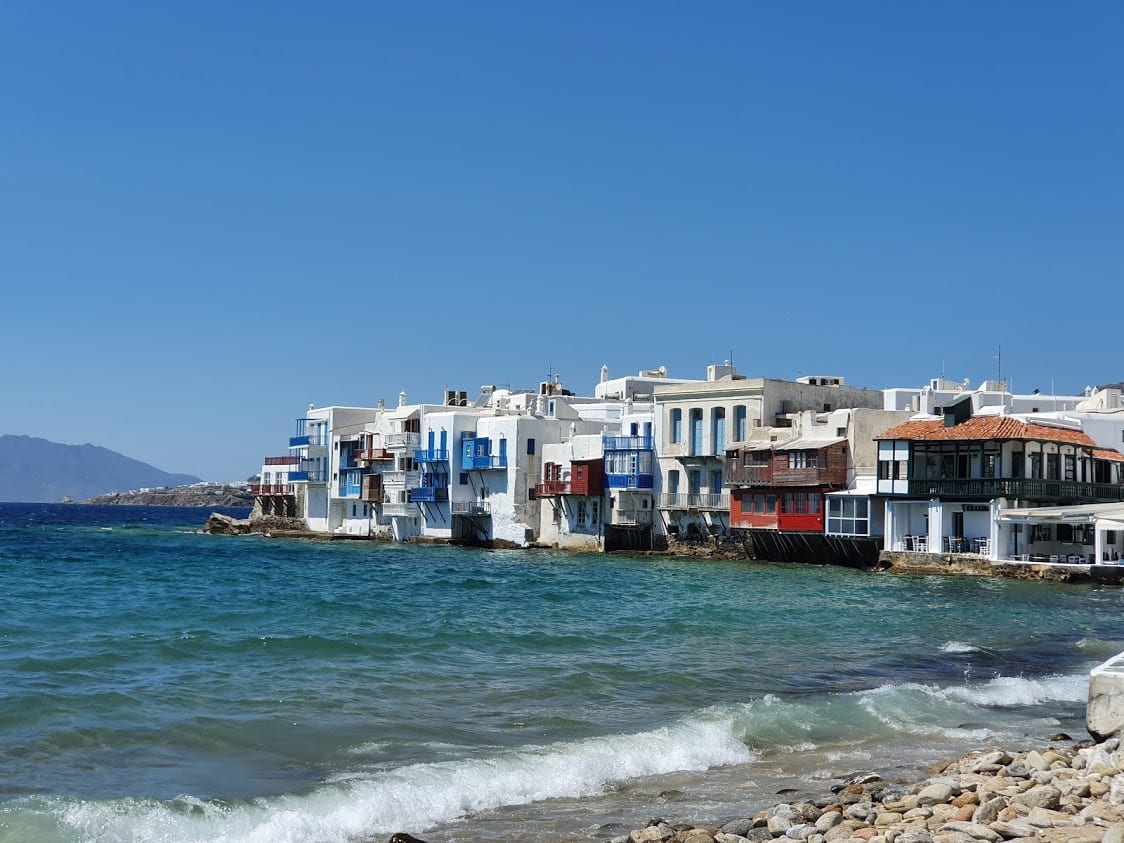 Which Greek islands are most affected by the Meltemi winds?

The groups of islands that are more affected by the Meltemi are the ones in the Aegean. In particular, the Cyclades islands are the most well known for being affected by them.

While Mykonos (in the Cyclades) may be nicknamed the island of the winds, nearby Andros and Tinos probably experience the Meltemi the most.

The effects of the Meltemi are not just restricted to the Cyclades though. The eastern side of mainland Greece, the Sporades, islands of Northeastern Aegean, the Dodecanese and even Crete are exposed to them. 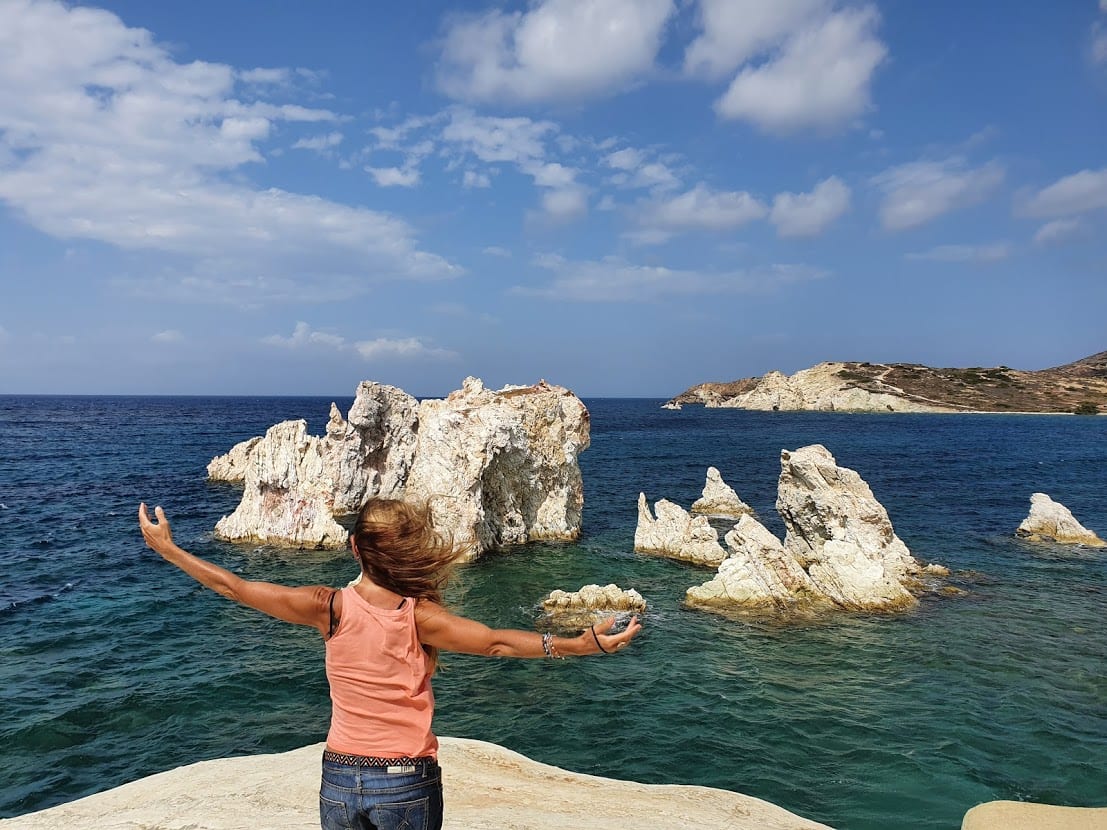 Should you avoid the Meltemi Winds?

Personally, I find that on all but the strongest blowing days, the Meltemi winds are quite welcome. They help to reduce the peak summer season heat on the islands to more tolerable levels, and it's always nice to have a little breeze when on the beach.

On the strongest blowing days, it's not quite so much fun though. It can be difficult to sit comfortably on a sandy beach for any length of time. On these days, I like to check out which beaches on an island will be sheltered from the blowing winds and head there.

As they blow strongest in July and August, I tend not to be in the Cyclades for these months. This is also peak season travel time when prices are more expensive – another reason not to travel then!

Not a fan of the wind and have to take your holiday in August? Head to Western Greece and the Ionian islands instead for your holiday! 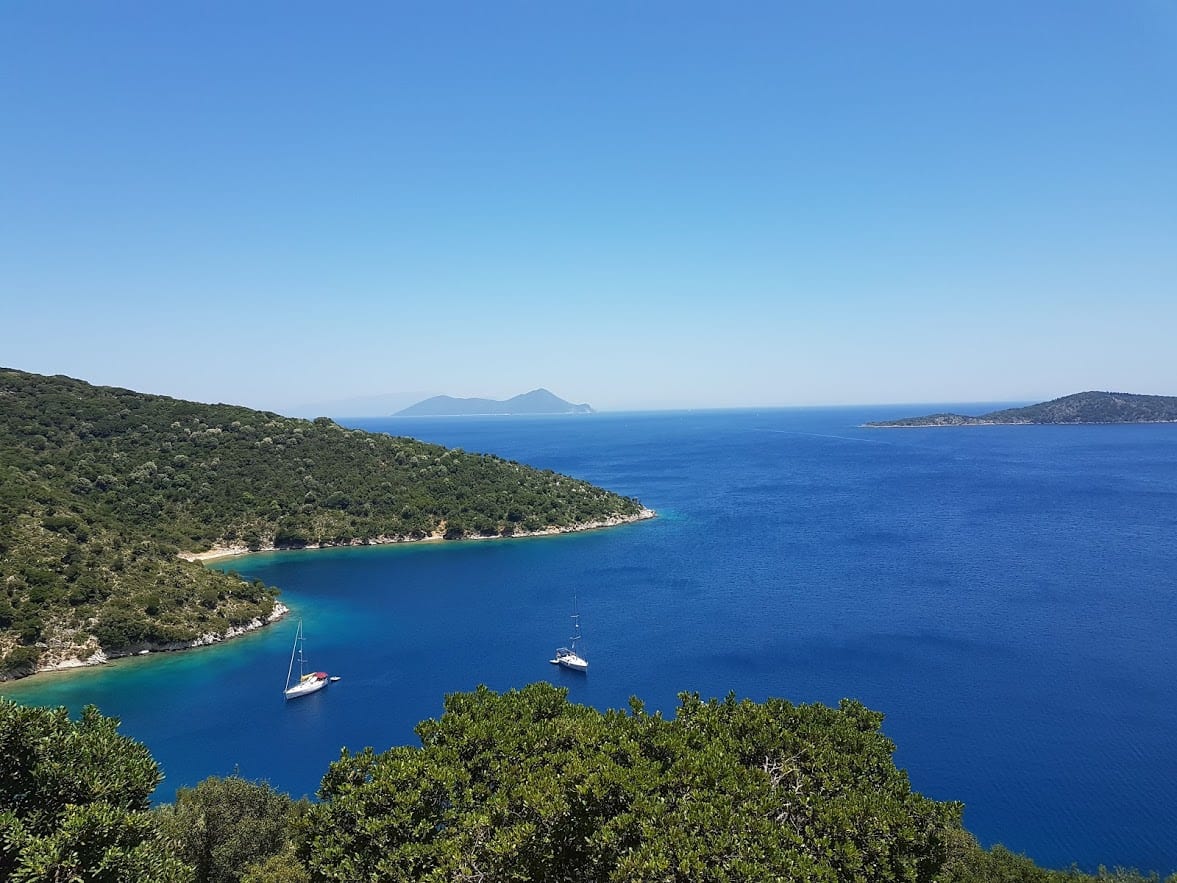 How long do the winds blow for?

Sometimes you can go two weeks without experiencing even the slightest Meltemi breeze, other times, it seems to blow for days without a break!

In general, if there is going to be a wind, it will blow strongest from mid-morning to around sunset. 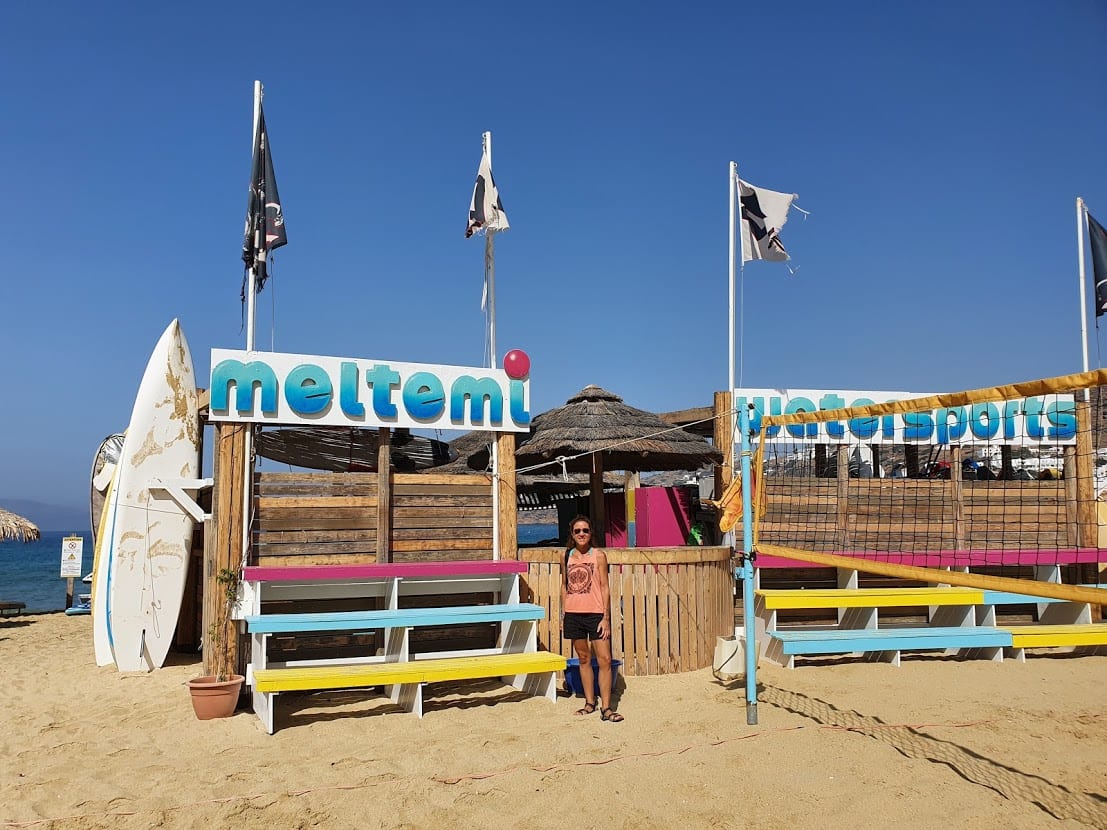 Swimming, watersports, and the Meltemi winds

It goes without saying that you should exercise caution when taking part in watersports activities or swimming when it is windy. Even strong swimmers can find themselves in trouble if they go too far out on a windy day.

In extreme circumstances, you may find that some organized beaches and watersports centers will be closed as it is too dangerous to be on the water with speeds of 100km/h or more. 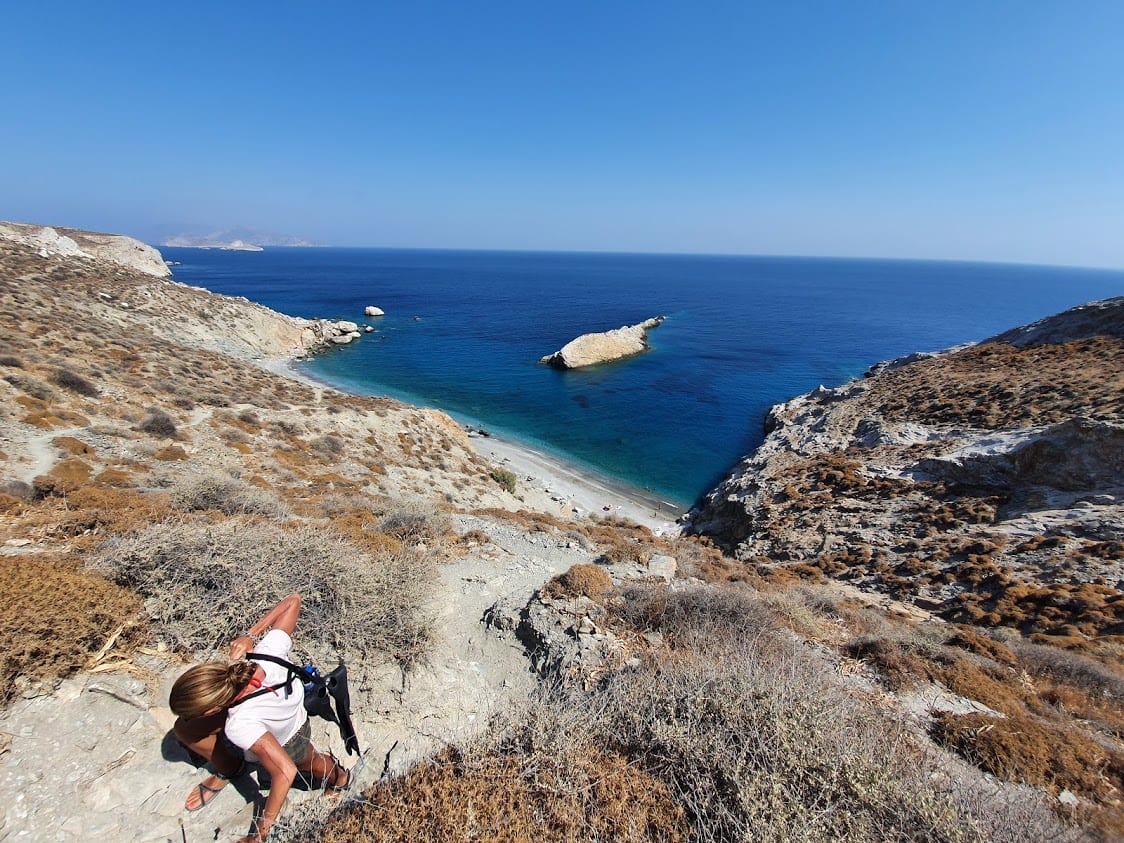 These very windy days might be a good opportunity to go hiking, check out a traditional village or spend a long lunch in a taverna. It's all part of the Greek experience!

Can ferries dock at port when it's windy?

The larger boats and ferries can sail on even the windiest days. The difficulty for them, is trying to dock at some of the smaller island ports.

It is not unusual for ferries to be delayed by some hours on Meltemi days, and occasionally a ferry may be cancelled. I remember watching a ferry try to dock at the port in Tinos for over an hour before it finally managed to get into position.

If you plan to go Greek island hopping during the Meltemi season, allow a little flexibility in your travel plans just in case. 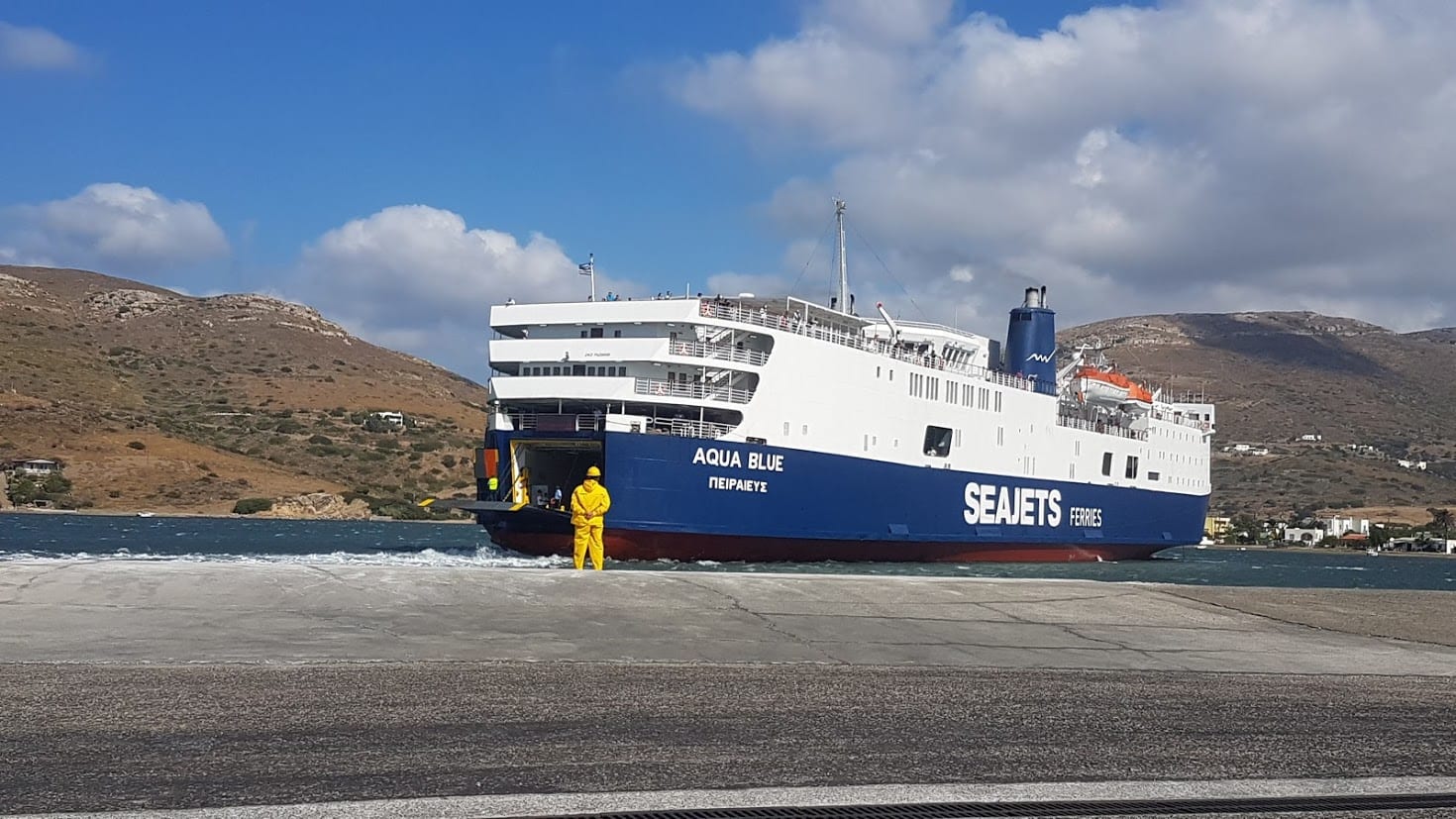 Sailing when the Meltemi blows

I'm not a sailor, so don't have an specific advice to offer here. I know that the waves can get big (is that technical?), and the gusts might make sailing in a boat quite challenging.

On the plus side, visibility is quite good and humidity low. I daresay that good sailors would be attracted to using a yacht in challenging conditions. Personally, even if I could sail, I would be looking for a calm port to put down anchor!

Before I moved to Greece, I'd never heard of the Beaufort scale before. Now I know that I may need to alter plans for anything over a 6! This indicates high winds, and if island hopping by ferry that day, I'd choose the bigger Greek ferries over the high speed ferries that might be more affected by harsh sailing conditions.

If having a beach day, I'd look for protected beaches which are sheltered from the direction the Meltemi generally blows. I'd also more likely choose a pebbly beach over a sandy beach!

You can find out more about it here: Beaufort Scale

FAQ About the Meltemi Winds of Greece

Here are some of the most frequently asked questions people have about the Aegean sea winds:

What causes the Meltemi wind?

Contributing factors to the Meltemi include pressure build ups in South East Asia and the Black Sea, and rainfall in the Balkans. When the winds start to blow there is a funneling effect which amplifies the winds as they blow south.

Mykonos is known as the windy island as it is one of those affected by the Meltemi, particularly in the July – August period. Outside of the Meltemi season, Mykonos is no more or less windy than other areas in Greece.

Are the Cyclades windy?

The Cyclades islands can be windy in the peak summer months due to the Meltemi weather pattern. Winds generally blow from north to south.

How long does the Meltemi last?

The Meltemi winds can start in June and end in September, but the peak months are July and August. The winds typically gather strength in the morning and die down in the evening. Meltemi wind spells can last up to a week, take a pause, and then restart.

What does Meltemi mean?

The Meltemi refers to a dry north-westerly wind that blows during the summer across the Aegean Sea.

Which are the windy Greek islands?

The strongest Meltemi winds can be felt on the Aegean islands of Mykonos, Tinos, and Evia island. The Meltemi winds happen during July and August during the day, and typically ease off in early evening.

You'll find plenty of other insights into planning a trip to Greece on my travel blog! There's a few examples below, and you can also use the search bar at the top of the screen to search for a destination. I've covered a lot, from the popular places like the two islands of Mykonos and Santorini through to other islands that are much lesser known such as Sikinos and Schinoussa. 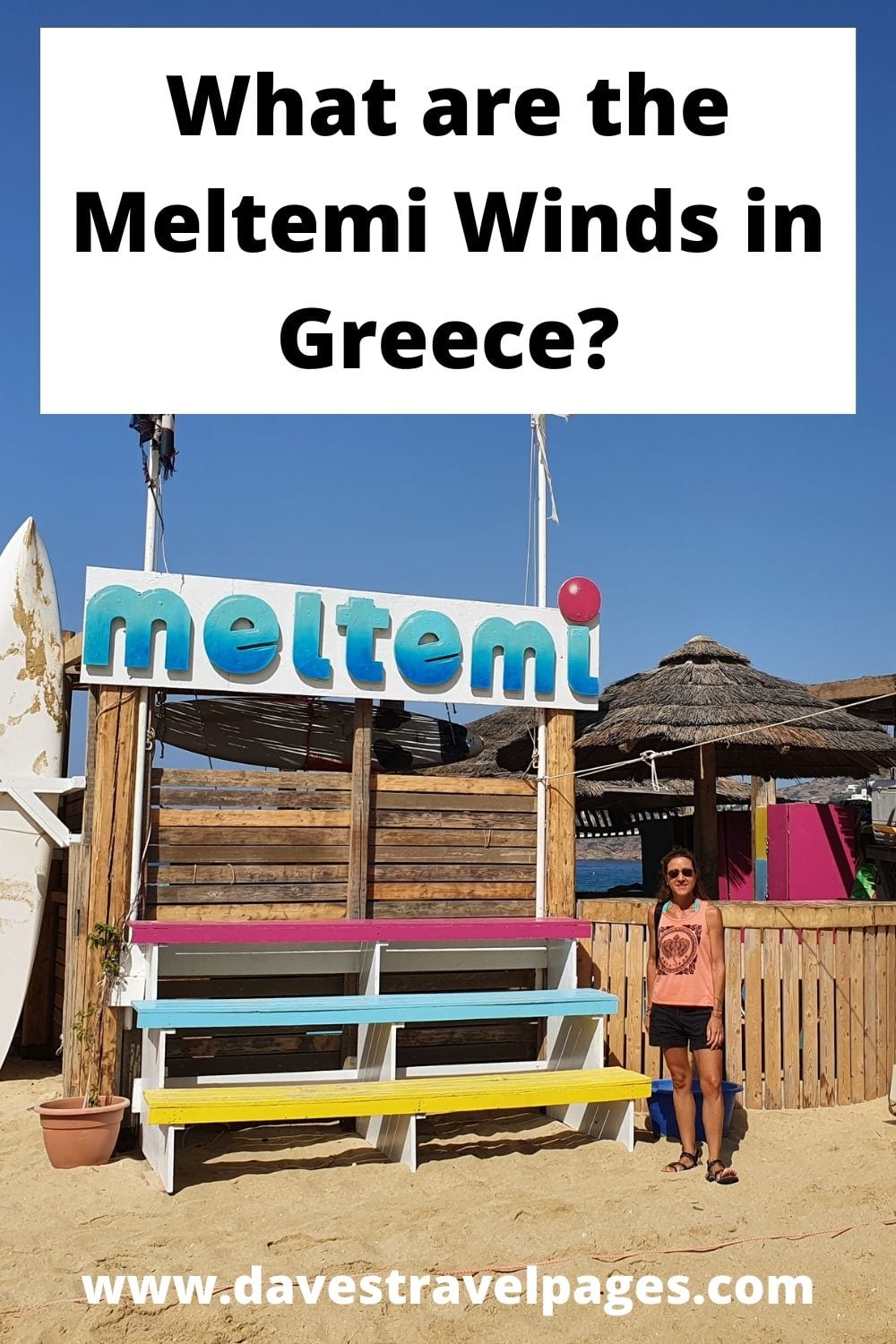 – Dave Briggs
Dave is a travel writer who has been living in Greece since 2015. If you enjoyed this guide to the Meltemi winds of Greece, you might want to check out the other guides and itineraries on this website. Follow Dave on social media for travel inspiration from Greece and beyond: