Most international travelers get to Paros by first flying in to Athens, Santorini or Mykonos, and then taking a ferry trip. You can also fly directly into Paros airport from both Athens and Thessaloniki. This guide shows you how to get to Paros in more detail. 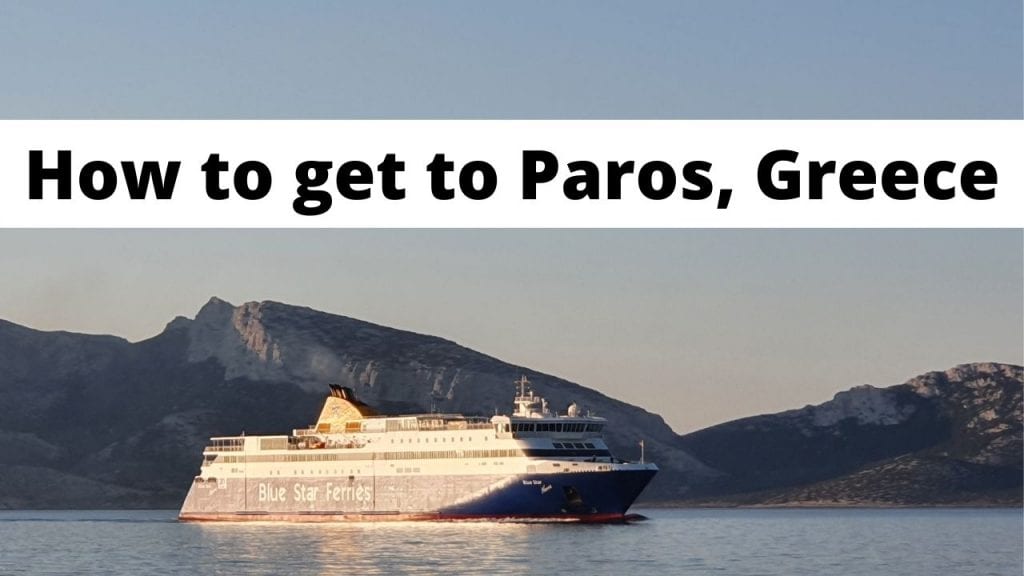 Paros is one of the more well known Greek islands in the Cyclades. Once a popular island with Greek students who had finished high school, it has now developed into a chic destination attracting visitors from around the world.

With its enchanting settlements where you can walk the backstreets and Labyrinthine alleyways for hours, beaches, cafes, and places of interest, Paros has enough things to see and do to keep you occupied anywhere from a few days to a week or two. 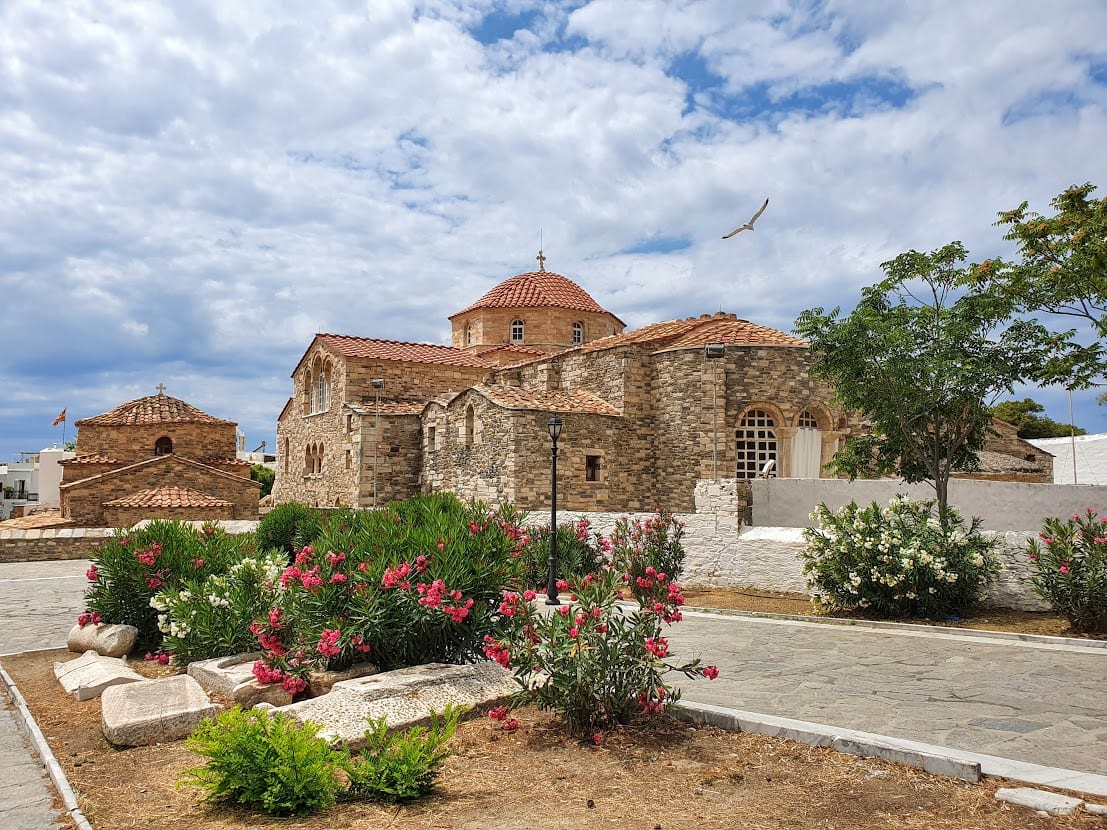 In this guide on how to get to Paros, I'll show you how to travel from Athens to Paros by ferry or plane, and also how to get to it from surrounding islands. Let's start out by looking at the flight options.

While there was talk of it operating as an international airport with connections to some smaller European cities, the events of 2020 and 2021 have put that on pause.

If you're interested in flying from Athens to Paros, the two airlines to consider are Olympic Air and Sky Express. Flight times are around 40 minutes.

If you want to fly into Athens International Airport and then take a connecting flight to Paros, make sure to leave plenty of time between flights just in case of delays!

Most people, however, will find that taking a ferry is the best way to get to Paros when visiting Greece. Ferries are more convenient than flights from Athens or Thessaloniki, and they're also a more unique experience! 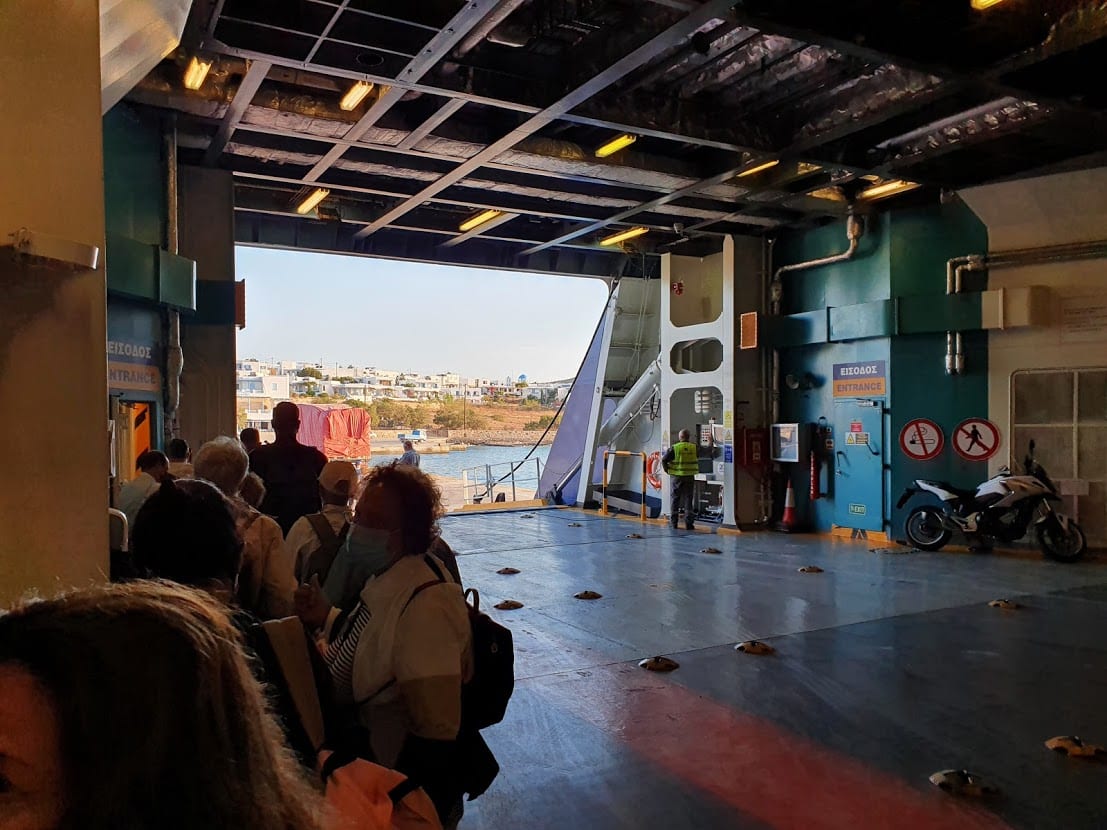 There are many ferry routes connecting Paros with mainland Greece as well as other Greek islands. These ferries are operated by different ferry companies, so when planning an island hopping trip, it's a good idea to have all your information in one place.

I like to use the Ferryhopper site to check schedules, work out which departure might be best, compare prices, and to book ferry tickets online. They have the most recently updated routes and most ferries to and from the Cyclades group can be booked here.

All ferries arriving to Paros do so at the port in the main town of Parikia. This is perhaps also the best area to stay in Paros if you are on the island for just a few days. 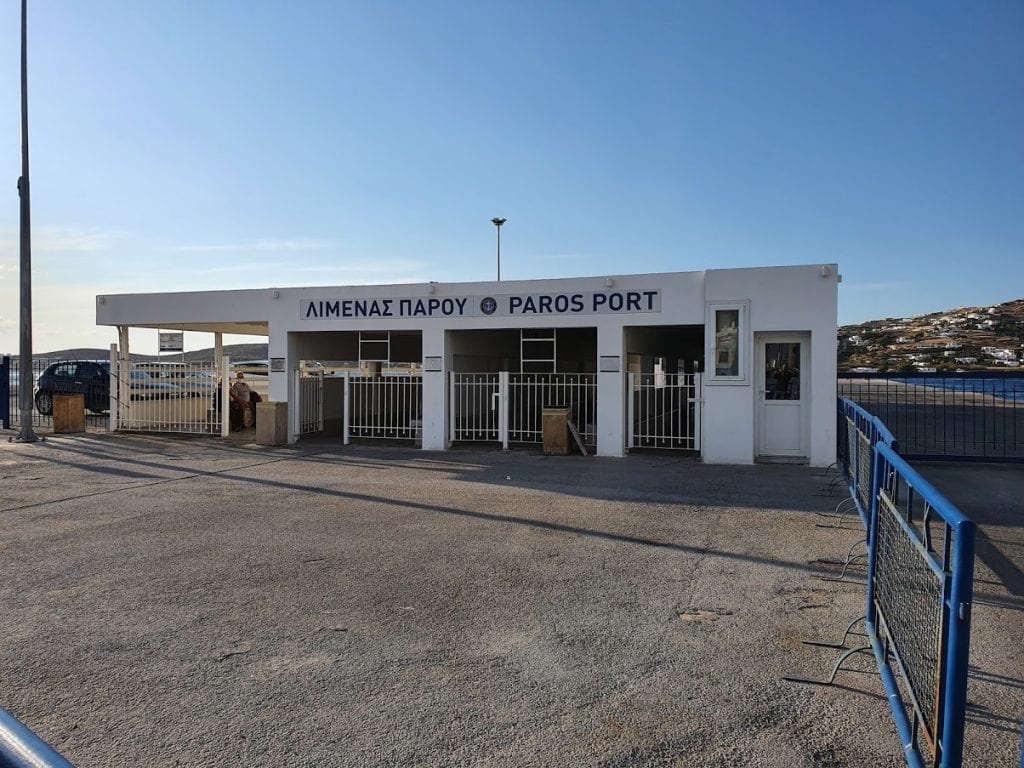 Athens to Paros by ferry

If you want to travel to Paros from Athens by ferry, you should note that ferries leave from all 3 Athens ferry ports, which are Piraeus, Rafina, and Lavrio.

The majority of visitors will find a departure from Piraeus to be the most convenient, especially if they want to spend a couple of days in Athens city center first sightseeing.

If you intend to take a ferry directly after landing at Athens Airport, you may find Rafina port to be more convenient.

Lavrio Port is most useful for locals who live in that area who want to go to Paros from Athens, or people that have their own vehicle.

Take a look here for more travel schedules to Paros by ferry: Ferryhopper

Other Cyclades Islands to Paros by ferry

You can travel by ferry to Paros from a number of the other Greek islands in the Cyclades. The nearest islands to Paros with direct ferry connections include: Amorgos, Anafi, Andros, Antiparos, Donoussa, Folegandros, Ios, Iraklia, Kimolos, Koufonisia, Milos, Mykonos, Naxos, Santorini, Schinoussa, Serifos, Sifnos, Sikinos, Syros, Tinos. 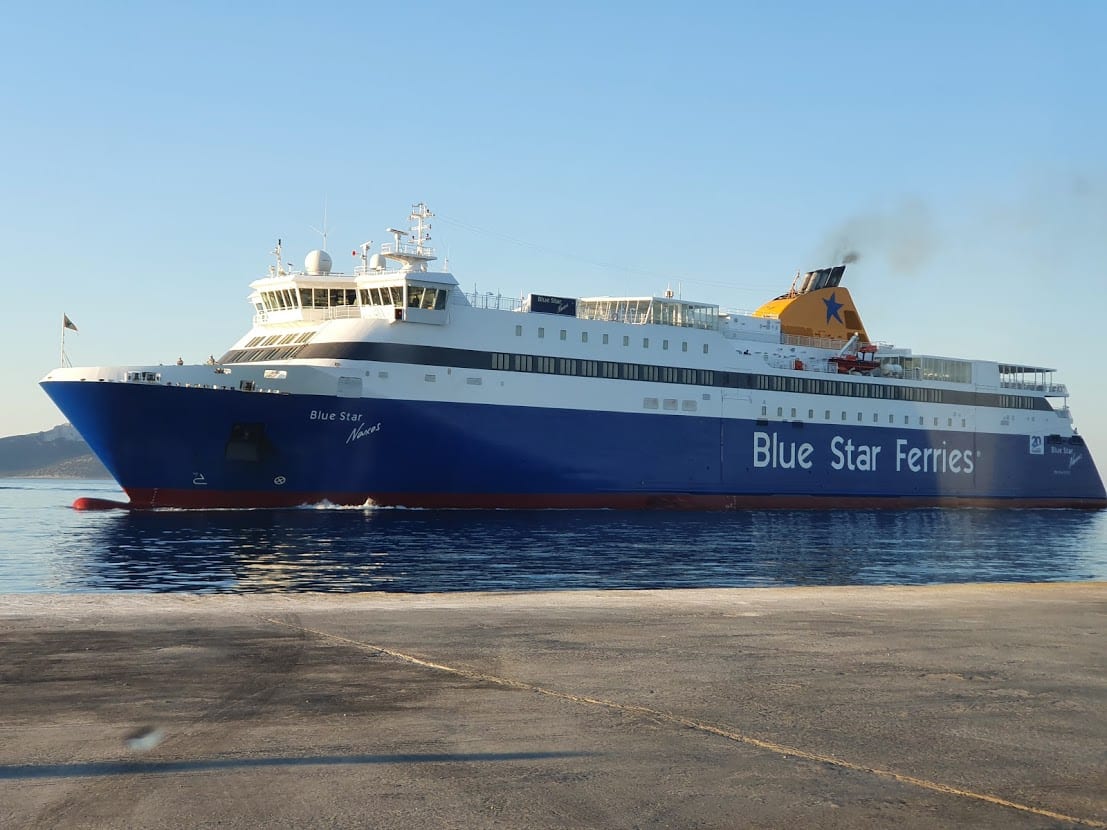 Find out more about how to reach Paros from these destinations by using the guides below:

— (1 and sometimes 2 ferries per day. SeaJets and Blue Star Ferries)

— (At least 1 ferry per day. SeaJets and Blue Star Ferries)

— (1-2 ferries per day apart from Wednesday when there is none. Blue Star Ferries and Minoan Lines)

In addition to the Cyclades islands listed above, there is also a way to get to Paros from Crete. 2-3 ferries per day sail from Heraklion port in Crete headed to Paros, and you can choose a SeaJets or Minoan Lines boat.

Of the two, the Minoan Lines is the high speed crossing, taking just 4 hours and 35 minutes. Check ticket availability along with the schedule at Ferryhopper.

4 boats per week also sail from Astypalea island and Paros after 5 hours and 15 minutes of sailing. The ferry schedule currently has these vessels leaving on Friday, Saturday, Monday and Wednesday.

Where to stay in Paros

Two popular areas to choose hotels in Paros are Parikia and Naoussa. These are especially good choices for stays of just a couple of nights.

If staying in Paros longer, and especially if you want to hire a vehicle to get around the island, you could consider other location.

Check out my travel blog: Where to stay on Paros

Best Way To Get To Paros FAQ

Readers planning to visit Paros often have questions similar to these:

How long is the ferry ride from Athens to Paros?

The quickest ferries take just 3 hours and 10 minutes to sail from Piraeus Port in Athens to Paros. The average ferry ride takes around 4 hours.

Are there direct flights to Paros?

Where do you fly into for Paros?

Flights heading to Paros land at Paros National Airport, which is located about 10 km away from Parikia, the capital of the island and main port town.

How do I get from Santorini to Paros?

The only way to get to Paros directly from Santorini is to take a ferry. There are 6-7 ferries per day that reach Paros from Santorini, and the quickest one (Sea Jets) takes just 1 hour and 50 minutes.

How to get to Paros from Mykonos?

There are year round ferries from Mykonos to Paros, and in the summer the frequency increases to 6-7 daily ferries making the trip. 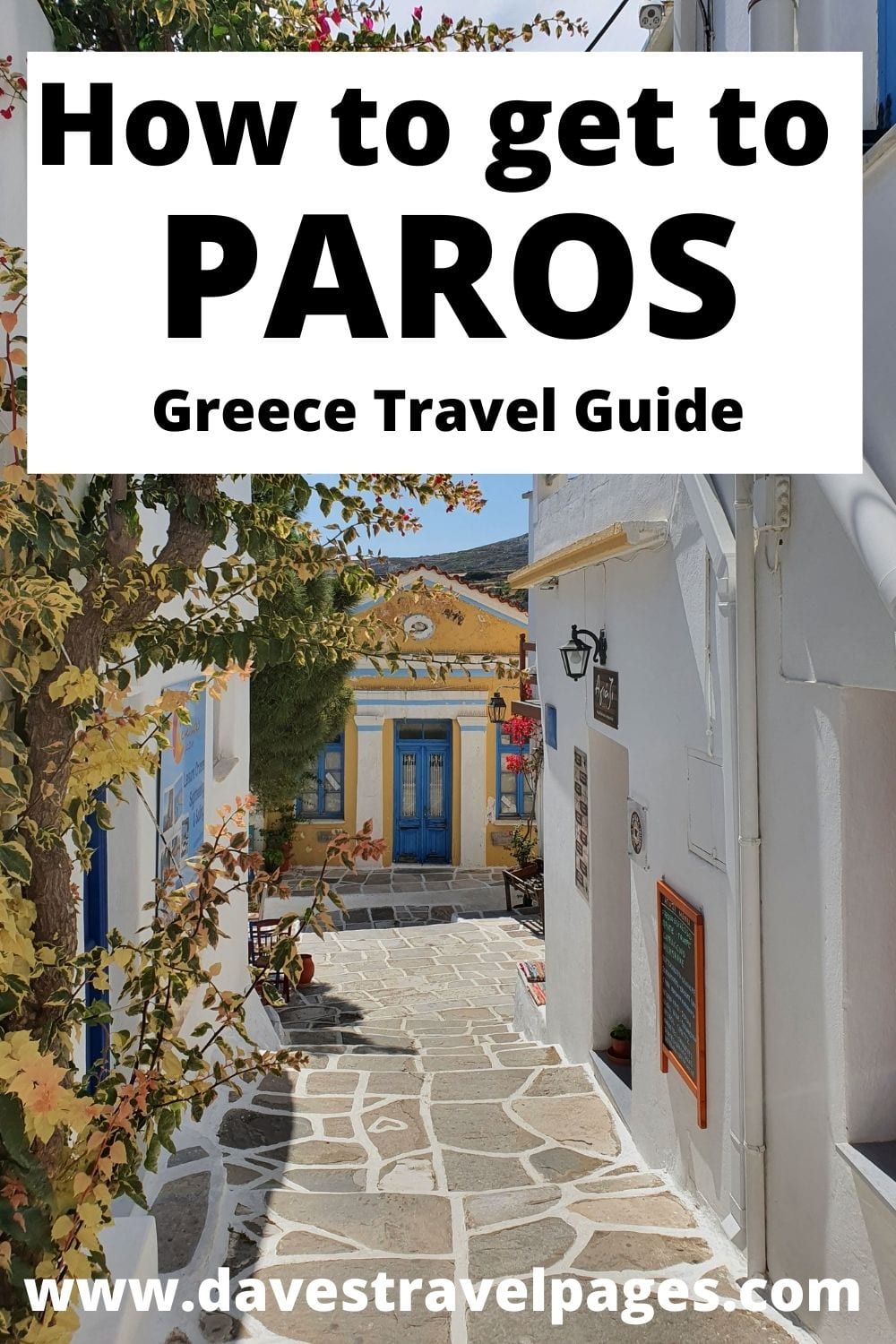 – Dave Briggs
Dave is a travel writer who has been living in and writing about Greece since 2015. As well as creating this travel guide on how to get to Paros island, he's written  hundreds of other travel guides here at Dave's Travel Pages. Follow Dave on social media for travel inspiration from Greece and beyond: