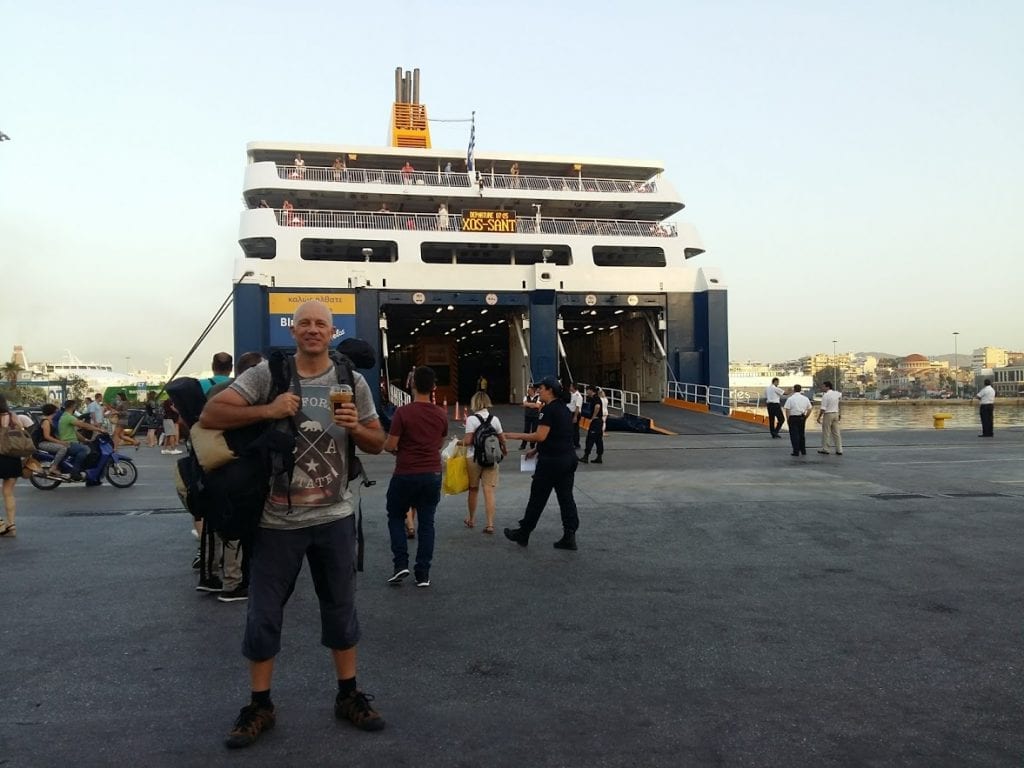 Many people often ask how to get to the Greek islands from Athens. While some of the islands have airports, the vast majority do not, and the only way to reach them is by ferry.

The main ferry port of Athens is the port of Piraeus. From here, you can take a ferry trip to most islands in Greece apart from the Ionian islands, the Sporades, and a few in the North Aegean.

So, if you're planning to travel to the Cyclades islands, Dodecanese islands, Saronic islands, or Crete, the chances are you'll take one of the Piraeus ferries.

By the way, if you're wondering where you should book a ferry ticket, use Ferryhopper – it's the site I use myself when island hopping in Greece!

In this article we are going to give you the definitive guide for ferries from Pireaus Greece to the Greek islands. It includes information such as getting from Athens city center to Piraeus, a Piraeus port map, and more.

The main port of Piraeus is located in Piraeus municipality which is on the coast, 10 kms away from central Athens. Piraeus has the biggest port of Greece, and also one of the busiest in Europe.

Piraeus center (away from the port) is an interesting, self-contained area, though most visitors rarely stop, and instead use it as a transit hub to go to the islands. For others it is only a short cruise stop.

Many people refer to Piraeus as “the Athens ferry port”, though technically Athens has two more ports, Rafina and Lavrio.

The port of Piraeus is massive and chaotic. It has ten gates where boats depart from and arrive at, and two gates where cruise boats dock for a few hours.

If you are taking a ferry from Piraeus to go to one of the islands, you will need to know which gate you are departing from, and plan your time accordingly.

This link has a map of Piraeus port, and explains which gate you need to be at to get your ferry.

How do I get to Piraeus ferry port? 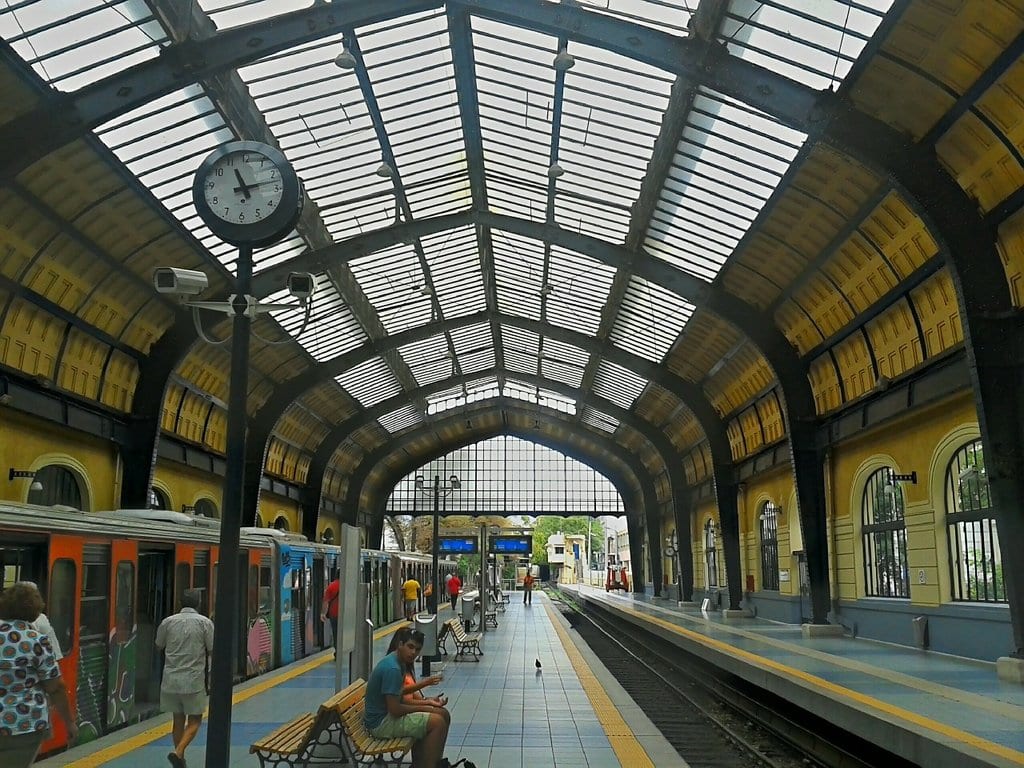 To get to Piraeus ferry port, you can either take public transportation or a taxi.

If you want to get to Piraeus from the Eleftherios Venizelos airport, you can take the Express bus X96. Tickets cost 5.50 euro, and the bus will take an hour to an hour and a half, depending on traffic.

Alternatively, you can take the metro or the suburban railway that will take about the same time and cost 9 euro. Remember to keep an eye on your belongings, as a few incidents of theft have been reported in recent months.

To get to Piraeus from central Athens, the easiest way is to get the green metro line from Monastiraki. It takes about 25 minutes, and will drop you off at Piraeus metro station, which is close to gates E5 and E6.

You will then need to walk to your gate, or take the free shuttle bus which runs inside the port.

Note that some gates are a good 15-20 minute walk from the metro station, so make sure you arrive with plenty of time, as the shuttle bus can often be quite full.

If you have an early departure or late arrival, you might consider staying at a hotel near Piraeus port.

An easier way to get to Piraeus, especially if you have to catch a ferry departing from a far away gate, like the Athens to Crete ferry, is to take a taxi. The taxi driver should know where to drop you off, but make sure you check your gate at the time of ferry booking.

Similarly, if you are looking to get from Pireaus to Athens, you can take either a taxi or the metro back into the centre.

More information: How to get from Piraeus to Athens.

Where do Greek ferries from Piraeus go? 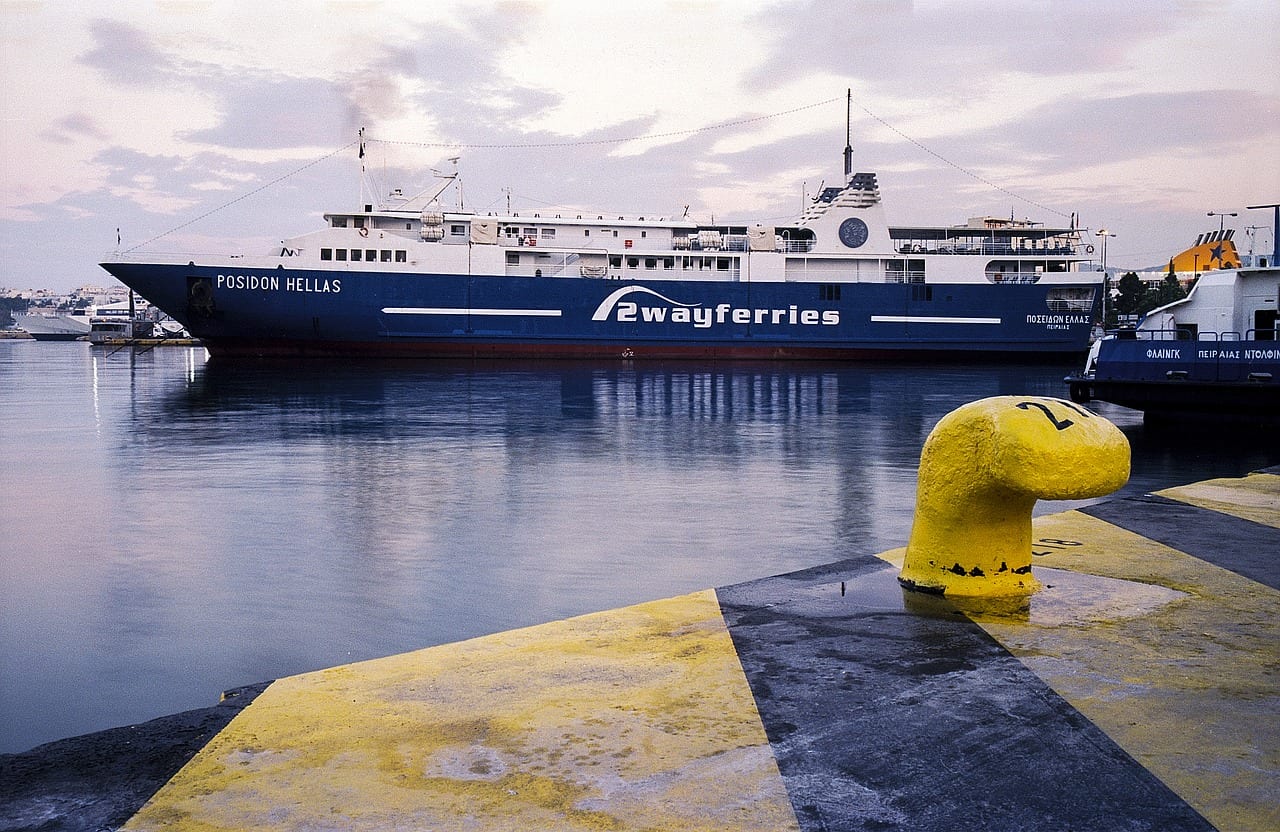 The main groups of Greek islands where you can get to from Piraeus are the following:

On most months, there are also cruise boats coming in and out of Piraeus on a daily basis. Those boats dock at a separate area at the far end of the port.

There are several ferry companies operating on a daily basis from Piraeus port. The biggest companies, that own the majority of Greek ferries, are Blue Star Ferries and their partner ANEK Lines, SeaJets, Minoan Lines and Golden Star Ferries. 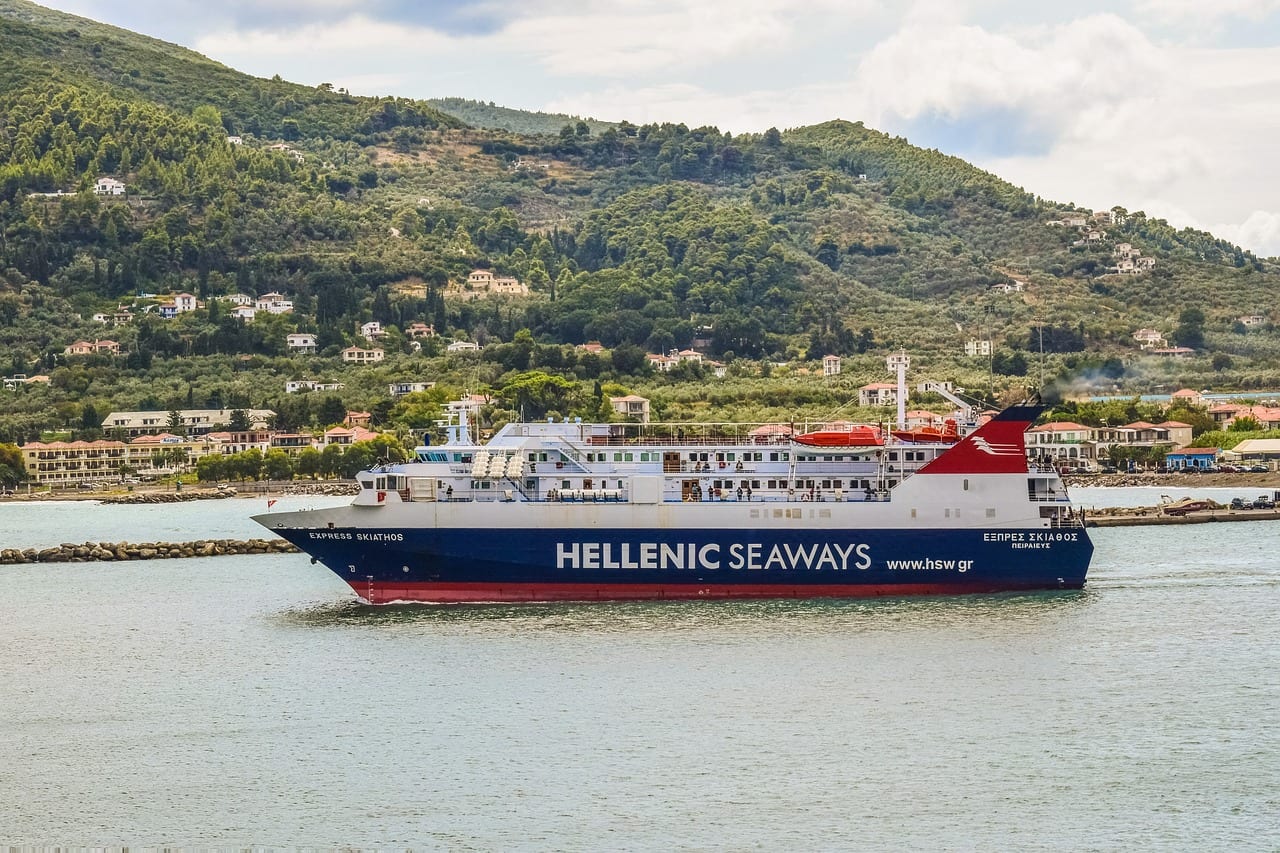 Greek island ferries vary a lot in terms of size, capacity, luxury, comfort and speed. There are bigger ferries that carry passengers and vehicles, and smaller, faster ferries that only take passengers.

Some of the above companies only have large ferries, while others have a combination of slower boats and highspeed ferries on different routes. There are also the so-called flying dolphins that might remind you of a bus or coach.

As an example, the Minoan Lines ferry Piraeus – Chania called Mykonos Palace is 214 metres long, and is one of the biggest and most luxurious ferries in Greece.

On the other hand, many of the Athens to Mykonos and Piraeus to Santorini ferries are smaller, high-speed ferries with no outdoors seating – but they get you to the islands quickly.

As a general rule, faster boats are more expensive, and the faster and smaller the boat the bumpier the ride. If you really don’t like travelling by sea, your best option is to take the bigger ferries, but be prepared for a longer journey. For example, a ferry from Piraeus to Santorini can take anywhere between about 4.5 and 8 hours.

Another thing to note is that summer ferry routes are different from winter ferry routes. Service in summer is a lot more frequent and there is generally more choice, while many of the highspeed ferries stop running in winter.

Most ferries have various types of seating arrangements. In general, high-speed ferries might have one, two or three types of seats at different prices, offering varying levels of comfort.

The bigger boats that serve longer routes normally offer an unassigned seat (deck) option, an assigned seat option, and several types of cabins, which are ideal for overnight trips.

Not all cabins are the same. In general, try to choose the ones with windows, as the ones without might be a little claustrophobic.

If you are on a budget, you can just go for the deck option and sleep on the floor, like many locals do. Just bring a sleeping bag as it can get quite cold due to the air-condition.

In terms of entertainment, again it varies a lot between ferries. All of them will have TVs, cafes and restaurants and bigger ones will even have shops in case you’ve forgotten your sunglasses or sunblock. The best activity on a slow boat might be to sit out on the deck, watch people go by, and check out the ports before you arrive at your destination.

A word of caution: don’t plan to return to Athens on the day of your outward flight back home – or if you do, make sure you have travel insurance.

The 1st of May is always a strike for ferries in Greece, so don’t plan to travel on that day.

How much does it cost to travel to the Greek islands?

As you can imagine, this depends on your destination, type of ferry and type of seat. If you are on a budget, it’s best to do some research before your trip.

In general, the highspeed ferries are more expensive than the slower boats. For example, the Flying Cat ferry from Piraeus to Hydra, costs 61 euro return, for just an hour’s journey.

Another popular ferry, the Athens to Mykonos ferry called Worldchampion Jet, can reach a whopping 170 euro return, which makes it more expensive than a flight booked a couple of months in advance or a cabin in a slower boat. That said, if you are on a budget you might want to avoid Mykonos anyway – but that’s another topic altogether.

The slower boats are much better value overall. There are often discounts for children and students with an ISIC card, as well as for return tickets.

As an example, a return ticket on the ferry Piraeus to Crete starts from 52 euro per person. In fact, the Athens – Crete ferry price is quite low, considering that it’s several hours.

If you know the dates you are planning to travel in advance, you could check if any companies run any special offers.

These would generally be non-transferable and non-returnable tickets, but if you know that you are travelling on a certain day, there is no reason why you shouldn’t book them. 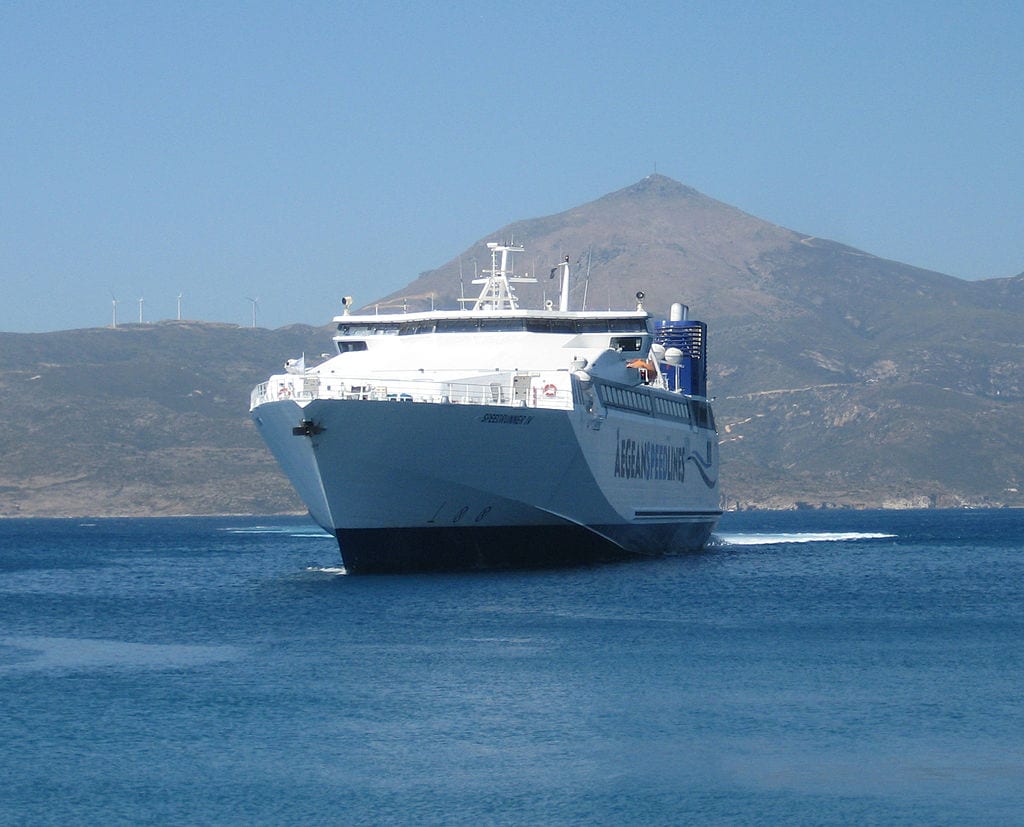 When should I book my ferry tickets to the Greek islands?

This depends a lot on where you are going, but also on what time of year you are travelling. If you want to catch the Piraeus to Mykonos ferry on a Friday evening in August, you should really book in advance.

If you are travelling off-season, or if you are going to any of the less popular islands, you might be able to find tickets last minute.

Remember, though, that some of the less popular islands might be on the same route with the most popular islands. All in all, if you know the exact dates that you want to travel, there is no reason not to book your tickets in advance.

Although most Greek ferry companies offer the option to print your tickets online, this is unfortunately not possible for some routes.

In this case, you will need to pick up your tickets from the port before you depart.

Alternatively, if you can, book your tickets on Ferryhopper, and get an e-ticket.

Readers planning to take a ferry to islands in the Saronic Gulf, Cyclades, and other island groups in Greece from Piraeus often ask questions such as:

What ferries go from Piraeus?

Piraeus port has ferry connections to most of the Cyclades islands, Saronic islands, Dodecanese, Crete and North Aegean islands.

How do I get from Athens International Airport or Downtown Athens to Piraeus Port?

From the airport, you can take a taxi ride, bus or metro to Piraeus ferry port. You have the same options if you want to travel from central Athens to Piraeus.

What ferries leave from Athens?

Most of the major ferry companies in Greece such as Blue Star Ferries, Minoan Lines, and Golden Star Ferries operate year round from Piraeus.

How long is the ferry from Piraeus to Paros?

There are many ferries a week sailing to Paros island from Piraeus, and the travel time takes between 3.5 and 5 hours.

How long is the ferry ride from Piraeus to Santorini?

Santorini is a little further away from the Greek mainland than other Cycladic islands, and the journey can take between 4 and 5 hours.

Would you like to find out more about Greek island hopping? Here's some of my most popular guides. 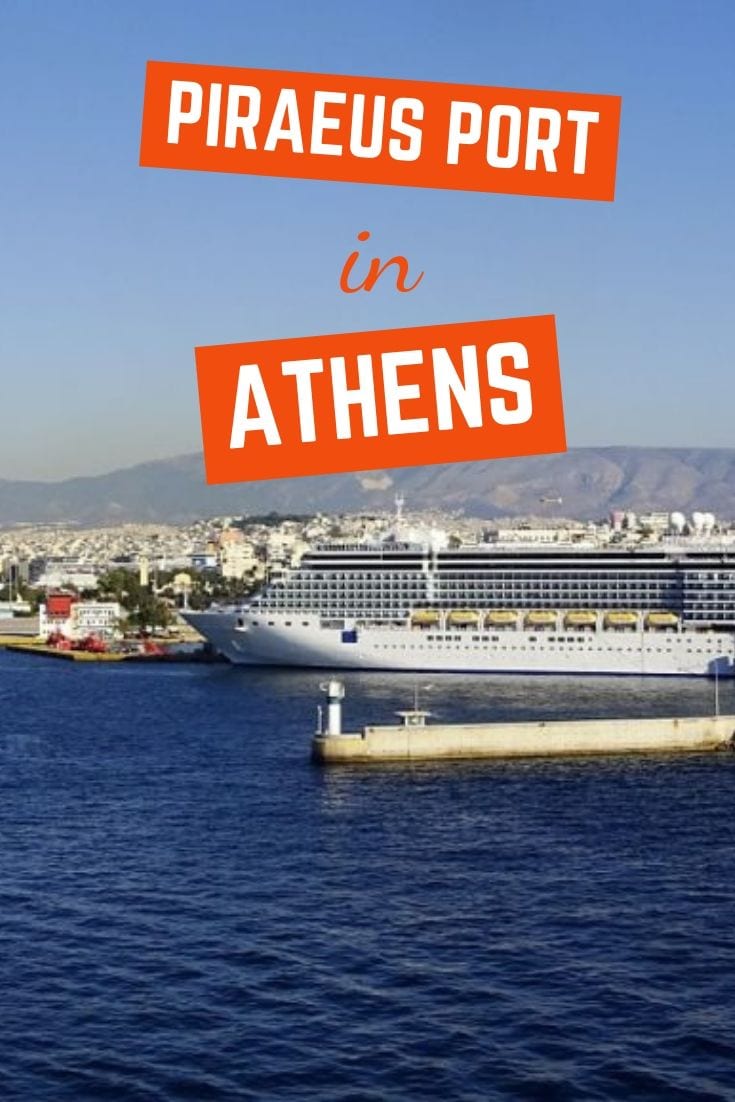 Add this Piraeus ferry guide to one of your Pinterest boards for later. That way, you'll easily be able to find it again.