Last updated on November 17, 2020 By Dave Briggs Leave a Comment

This bike touring post covers my cycling route from Gaborone to Springbok in South Africa. Part of my bicycle tour from England to Cape Town.

Bike Touring from Gaborone to Springbok

This blog post was written in April 2007 as part of my bike tour across Africa. It was reformatted for easier reading in 2020, but the content remains the same.

Today, I attempted to book my flight back to England from Cape Town, which didn't go quite as smoothly as I had planned.

I wanted to use British Airways, as they have something called an E-ticket which basically means that no paper tickets are issued, and for me, this would be a bonus, as it would mean that I wouldn't have to wait anywhere for paper tickets to turn up.

However, try as I might, I couldn't get my bank card to work on their online booking system, as it kept saying that the card number did not match the card type, which is rubbish, as I use it everywhere without any problems.

After an hour, I gave up trying, and decided to find a British Airways office in Gaborone using the internet. I quickly found the information I needed, and as it was on the other side of town, I leapt in a taxi.

As we drove into the car park and I saw the British Airways sign, I had a bit of a smile on my face as it looked like I would get a result after all. That smile soon vanished however.

When I walked inside the shopping mall and located the shop, which still had a British Airways sign hanging over it, I was gutted to find out that it is now a creche.

Wading through a sea of ankle deep children, I asked the woman running the place if she knew where British Airways had moved to. She said she couldn't really help, but thought that BA had closed all their offices in Africa. Wonderful news.

I was a bit peckish as well as peeved, and so I had a burger at Wimpy, which was marginally better than the ones still to be found occasionally at English motorway service stations, and tried to plan my next move.

STA are a pretty good travel company, and so I decided that I would try to book a flight through them.

Back in another internet cafe, the main version of the STA website was US based, and would have let me book the flight that I wanted, but required that I register with the site first using a US zip code. No go there.

The UK version of the STA website didn't require me to register first, but would only let me book flights leaving the UK. No go there either.

The South African version of the STA website did let me book the flight, although it required an address in South Africa where they could post the tickets to.

I decided to book it, giving the address of a hostel I will stay at in Cape Town, and it all went through, so now its just fingers crossed that it all goes without a hitch.

The ironic thing, is that the flight is actually with British Airways, and is the one that I had tried to book earlier. So that's how I spent the day, but I guess I got a result of sorts in the end.

In the morning, I gave my bike a bit of a service and replaced the pedals. Went into town, phoned home using Skype, and had a meal in the pub.

No confirmation about the flight yet, but I'm looking forwards to starting off tomorrow and getting into South Africa, my last country!

Today was supposed to be a little bit of a celebration, as I have finally cycled into South Africa, the last country of this trip. The actual cycling today was so horrible though, that I felt too exhausted to move at the end of the day, much less celebrate.

On leaving Gaborone, I started cycling over hill country, which by itself would probably have been ok, but the strong winds totally destroyed me.

I've cycled through the wind before, but its never been like that. No matter where the road turned, the wind was constantly blowing against me, and at times, I was cycling as hard as i could just to stay still.

Its hard to describe just how soul destroying and knackering it is cycling into a constant, relentless and deafening headwind, up and over hills.

140 kms of hell later, I was in the South African town of Zeerust. I was going to camp, but it had been so cold all day, that I succumbed to weakness and went for a B+B instead. So, last country – Yay!! Aching body – boo.

I spent some of last night having liquid ablutions, which was just simply delightful until the Imoddium kicked in. I'm not sure what brought it on – Bad water from the campsite in Gaborone, the extreme changes in temperature, the huge mixed grill I had the previous night or a combination of all three.

I felt alright in the morning though, and only had a short day ahead of me. It was zero degrees first thing, and there was frost on some of the car windows, so it was a good job I chose not to camp I think.

It's amazing how just travelling south from Gaborone for a 100 kms or so has made such a noticeable change in temperature. It's definitely winter here in South Africa! The cycling was just a short journey of 70kms or so.

Uneventful cycling through the countryside to Vryburg. Thats about it really. 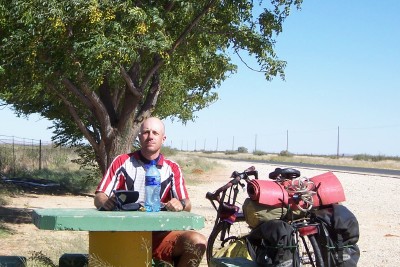 Again, not a lot to report. The road I am taking passes through farming countryside, and is reasonably flat, so there's not a great deal to look at really.

I made good time though, covering the 140 kms in six hours, due in part to a tailwind which blew me along for a couple of hours.

As I approached Kuruman, I came across a campsite, and freezing cold temperatures or not, I have to put the budget back on track.

Some guy at the site mentioned that there is another campsite just outside of Oliphantshoek, which is my next destination.

It got pretty cold last night, and my ripped, torn, smelly sleeping bag with a broken zip struggled to meet the challenge. There were a few hills today, but also an amazingly flat section where the wind just blew me along.

In Oliphantshoek, I opted for the campsite again, and decided to check my bike over, and a good job I did. The rear wheel had a really loose spoke, and on closer inspection, there was a bigger problem. (Isn't there always??).

The spoke sits in a unique kind of socket which in turn sits in the rim. The socket had become corroded and has broken, leading to the loose spoke.

A trip into town was useless, as they didn't have a bicycle shop, and so I spent the afternoon trying to bodge a repair together.

The first prototype made from aluminium was a failure, and I nearly sliced the top of my finger off in manufacturing it. Version 2, made from a cut up section of old inner tube, blood, sweat (but no tears. I'm hard, aren't I ?), was more successful.

With 160 kms to go to Upington which was the next major town, and with no settlements in between, it was bandaged fingers crossed that the repair would hold.

Today was a long one at 165 kms, especially with the regular stops to check on the rear wheel situation. Again, the landscape was a bit nothingy, and so I spent a lot of the time daydreaming as I cycled along.

I was just getting to the good bit of what I would do with Kierra Knightly given half a chance, when some guy pulled over in his car, gave me a coke, talked a bit, and then drove off again. Thanks for the coke mate, but make it a cold one next time will you?

I couldn't get back on the same train of thought, and instead started thinking about great food combinations – Pie and chips, bacon and eggs, jelly and ice cream, bananas and custard. As you can see, I spend my time wisely. I reached Upington for four, and found a campsite.

A well earned day off, as I'd covered quite a few kilometres since leaving Gabs. After breakfast, I visited the towns bicycle shop, and although I already knew the answers, I had to ask the questions anyway.

Cheers, thanks a lot.

I have a about 1000 kms to go to Cape Town, and I just have to hope that my bodge job repair holds all the way. My tyres are starting to look like slicks now, so say a little prayer for them also! So near, and yet so far !!

I used the internet for a while to make a few phone calls, and although I haven't got ticket for the flight home yet, I'm a step closer, but it looks like I will have to sort it out in Cape Town.

Had my first cooked meal in a long time, and stocked up on supplies. In the afternoon, I made versions 3 and 4 of spare repair parts in case I need them, as the next section covers 400 kms to the regional capital town of Springbok. 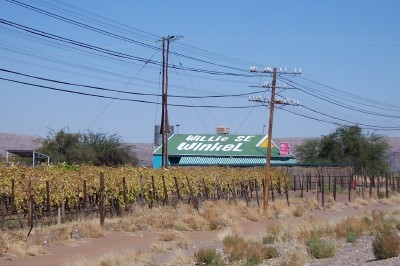 Only 85kms cycling today, past vineyards, barren countryside, and over the occasional hill. It was a bit warm today, in the low 30's, but at least there was no humidity.

A couple of randoms pulled over at one point to have their photo taken with me – Not sure what that was all about.

I also passed this Willie Winkels place and I have even less idea what that was about. The spoke and wheel survived another day, and in Kakamas I booked into a good quality B and B. I deserve a treat, and with two days hard cycling ahead, good food combined with a good nights sleep seems like a wise move.

There was little traffic on the road today, and I saw barely six cars an hour, which made the desolate and barren surroundings seem more personal.

At times, it was like I was within a circle of reality only 200 metres around, and that this bubble moved with me as I cycled constantly towards a hazy landscape painting of hills.

A long day, and pretty tough in places as I crossed a couple of hill sections. The last 60 kms was particularly hard when a cross wind picked up to coincide with the most hilly section.

I knew that this was my last long day of the trip though, so I just plodded on. Springbok is a town in the middle of nowhere, nestled in some hills.

There doesn't look a great deal to do, but as I've got plenty of time to get to Cape Town, I've decided to take a couple of days off. I've managed to get a self contained chalet for 110 Rand a night, which is about 7 or eight pounds, and two days of laying in sounds good.

From here to Cape Town is about 500 kms, which I plan to do in shorter journeys over 7 or eight days, meaning that I should reach Cape Town for some time around the 20th of May. Almost there… Almost there !!