Stage 4 of my bike tour from England to South Africa sees my cycling from Strasbourg to Blaustein. My aim, was to head to the start of the River Danube cycleway, and then follow the route through Europe.

Cycling from Strasbourg to Blaustein

I had been looking forward to cycling along the famous River Danube cycle path, and this stage of the journey took me right to the very start. Here we go, with stage 4 of my bike tour from England to Africa.

I thought it was going to be a bit of a nightmare getting out of Strasbourg, but despite the initial roadworks and diversions, it proved to be a doddle.

I discovered a previously unknown to me European cycle path from Strasbourg to Offenbourg, which was a bit of a bonus, as it meant that I missed all the major roads and of course their traffic.

I decided it would be too early to stop in Offenbourg, so I carried on instead to Herbolzheim.

I cycled past lots of fields of corn on the cob again, and temptation became too much, so I had to lift one. And very nice it tasted too.

After setting up camp, I popped down to the local supermarket, and the German equivalent of the Tour de France went by (Tour de Deutchsland??), so I stopped and watched with the waving locals, a few of whom I got talking too.

So far, the Germans seem more open than the French. Also, every French house had shutters on the windows, and in Germany they don't.

The day started off well, and I made good time towards Freiburg. It all began to go wrong on the outskirts of the city, however.

The road that I needed to take suddenly decided to not allow bicycles on it, so I had to find cycle paths and quiet roads which weren't on any map that I had, all the while trying to keep track of where the main road was so that I was going in the right direction.

At one point, I had no choice but to go onto the road, which made all the other motorists extremely happy, as it gave them an excuse to use their car and lorry horns.

Then, just as I headed off onto a mission to find a quieter road running in roughly the same direction, the heavens opened. And I mean really opened. It was like somebody was pouring the sea out of the sky.

I have possibly been wetter when swimming, but I doubt it. Drenched, and with no idea where I was or which direction I should go in, I found a river that had a cycle path, and decided to follow it… Well, it had to go somewhere, right?

And bizarrely, it did. I found a signpost for a campsite, followed it, and set up camp in the lesser of twelve puddles. After consulting a couple of maps, it appeared I was in roughly the right direction, so no worries mate!

I think the words ‘super challenging' may be an understatement of the days cycling. I had to climb so much. So much.

Again, there were sections of main road I couldn't travel on, and I had to find minor roads and pathways which weren't on my maps.

My legs ached and I was tired. I booked into a hotel for the night, and then considered that as I'd just cycled over the backbone of the black forest mountains, I hadn't done too badly. 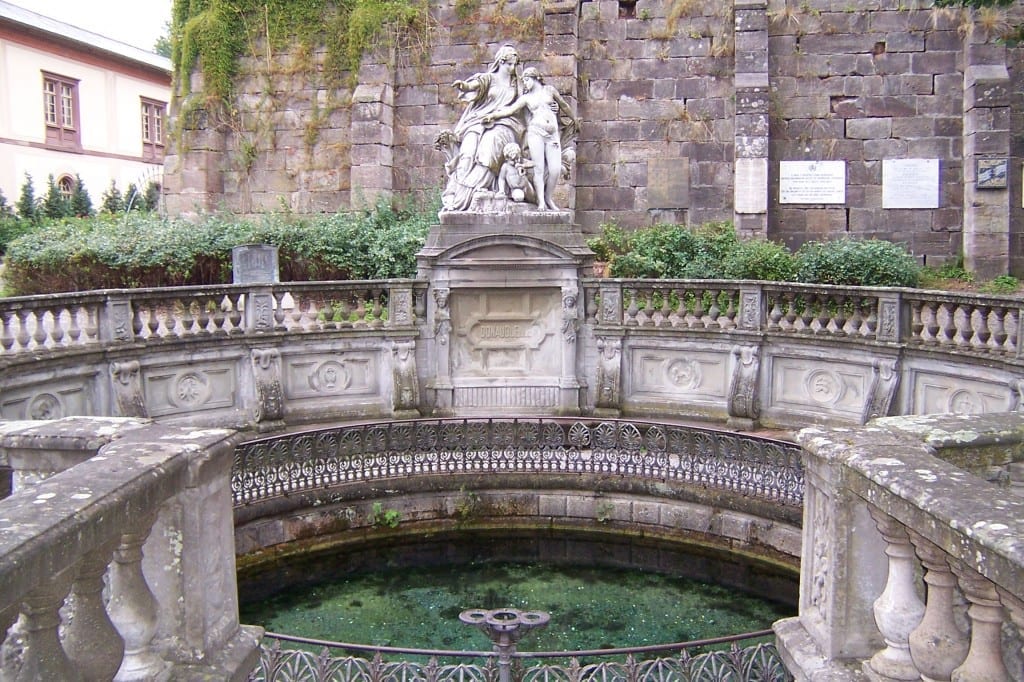 This is the obligatory photo of the source of The River Danube, which is a fountain in the grounds of a grand old house (currently under restoration) in Donnaueschingen.

The Danube then actually flows into a rivers called the Brigach (notice the similarity with my last name there?) and then after a few metres, officially becomes the River Danube.

The cycle route started by the riverside, and then diverted through fields for a while. Although the Danube cycle way follows the rivers direction and course, it doesn't always hug the bank, and wanders through fields and forests at times.

The only hard bits of the day were when signposts were missing. The actual cycling itself was easy, which was just as well given the previous days exertions!

Most of the cycle path was smooth surfaced, although there was one section going through a forested gorge with limestone pinnacles which was rough track. 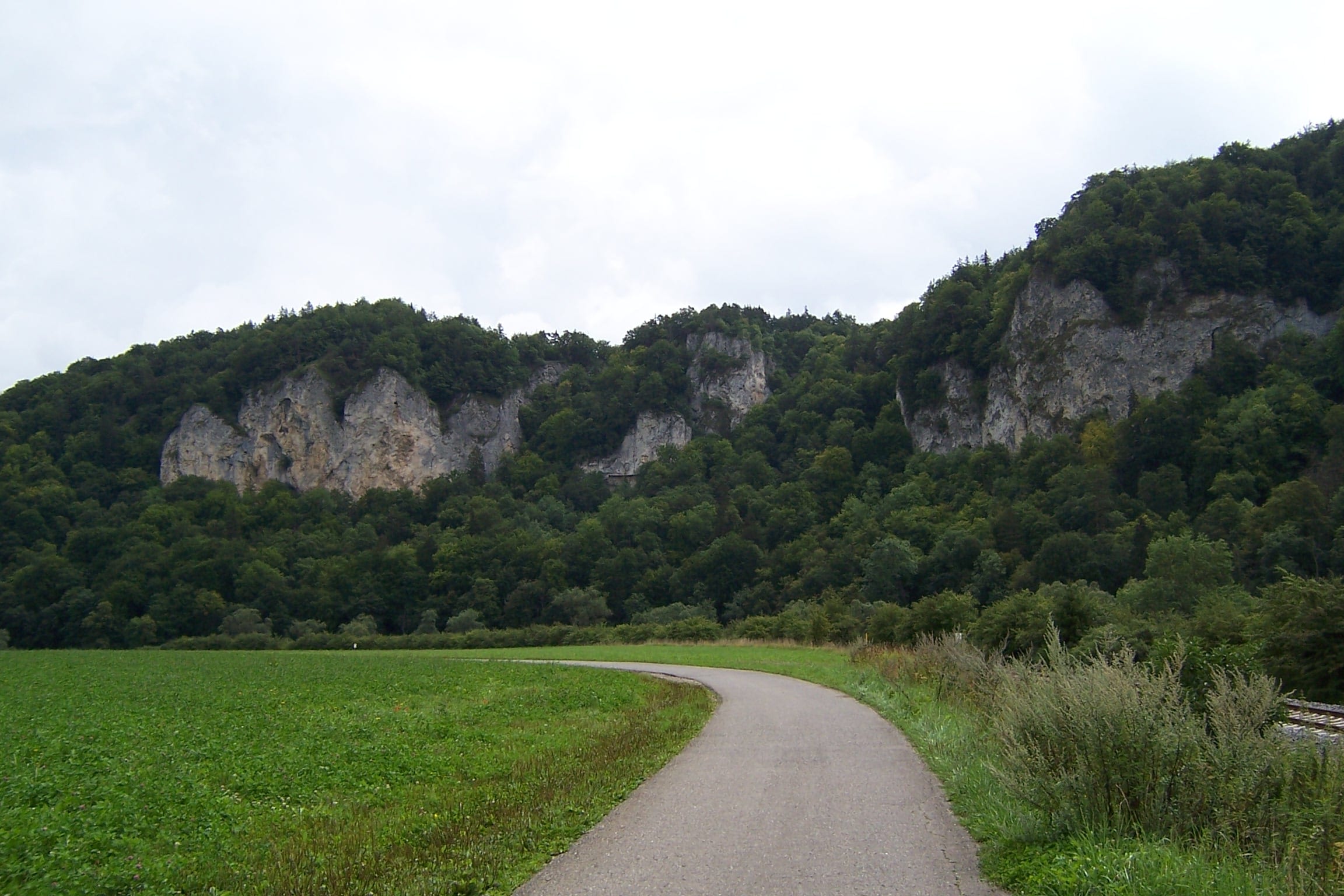 It decided to rain 10kms before where I had decided my day would end, but I'd learned my lessons well, donned waterproofs and waited it out!

Housen Im Tall had a campsite, and the inside of my tent just about dried out (it had become wet from where it had been packed away) before it started raining again.

A group of Germans decided to bring a guitar out in one huge tent near me and sing until two in the morning. They were alright when they stuck to folk songs, and there were some quite beautiful harmony's, but they absolutely murdered Wonderwall and Whats Going On.

Well, it started off raining in the morning, and it pretty much kept it up for the rest of the day. It wasn't of the torrential type, more of a gentle soaking to the skin type.

The day's cycling itself was easy, it was more about having the right mental attitude to keep going through the rain, knowing that almost everything you own stands a good chance of being wet.

Fortunately, the rear panniers on my bike are quality ones, and everything inside (clothes, sleeping bag, laptop) is (or has been so far) quite safe from the weather.

The handlebar bag and front panniers are not so good quality, but they're doing a good job under the circumstances. It's the tent which is not so good, because if it's wet before you roll it away in the morning, the inside becomes damp, which means you have a nice cold, soggy floor to put your stuff on at the end of the day.

I think the weather has been unusual for the time of year, and I overhead someone saying that it's not normally cold and wet in October (13 degrees at midday… pathetic!).

The only good thing, is that my German must be improving if I understood what they said. Riedlingen had a basic campsite, so i set up, and cycled into the town to have a coffee, where there were some other people looking like drowned rats as well. So, life for me is….

1. Stay as dry as possible.

I quite like the simplicity of it all, (being a simple person), and my biggest stress is whether to have tuna in oil, or tuna in brine with my pasta at night. 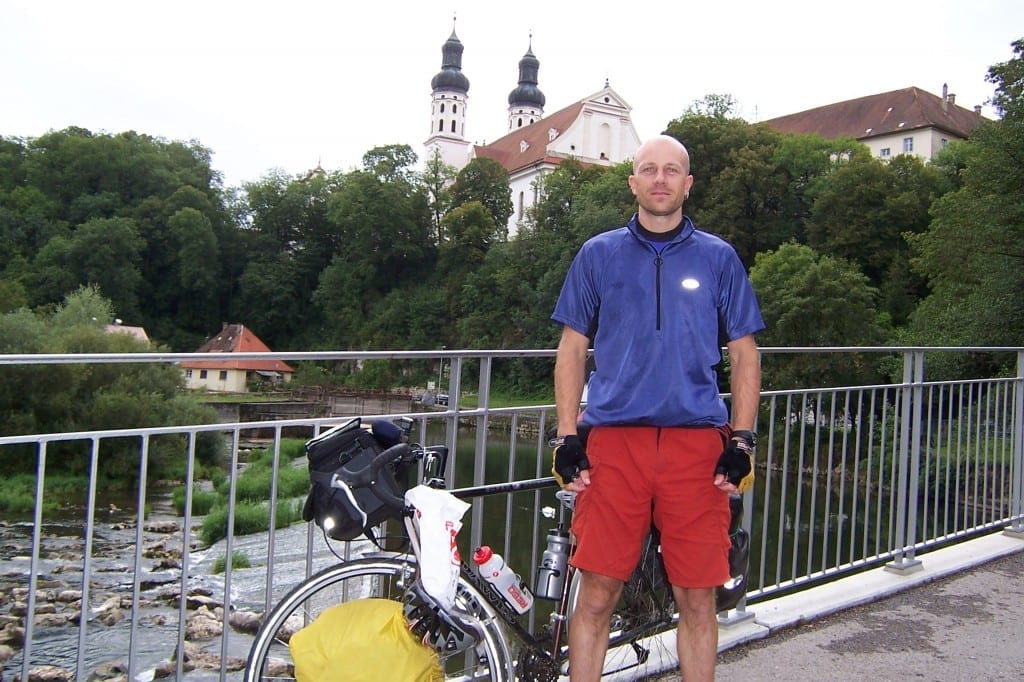 Fortunately, it stopped raining during the night, which meant that my tent was almost dry before i packed it away… yippee! I got talking to a couple of French cyclists who were the only other people staying at the site, and we all agreed it was hard to get motivated when it was raining.
I set off after a supermarket run (I have to get used to carrying three days supplies with me from now on), and it was a pretty straight forwards day. 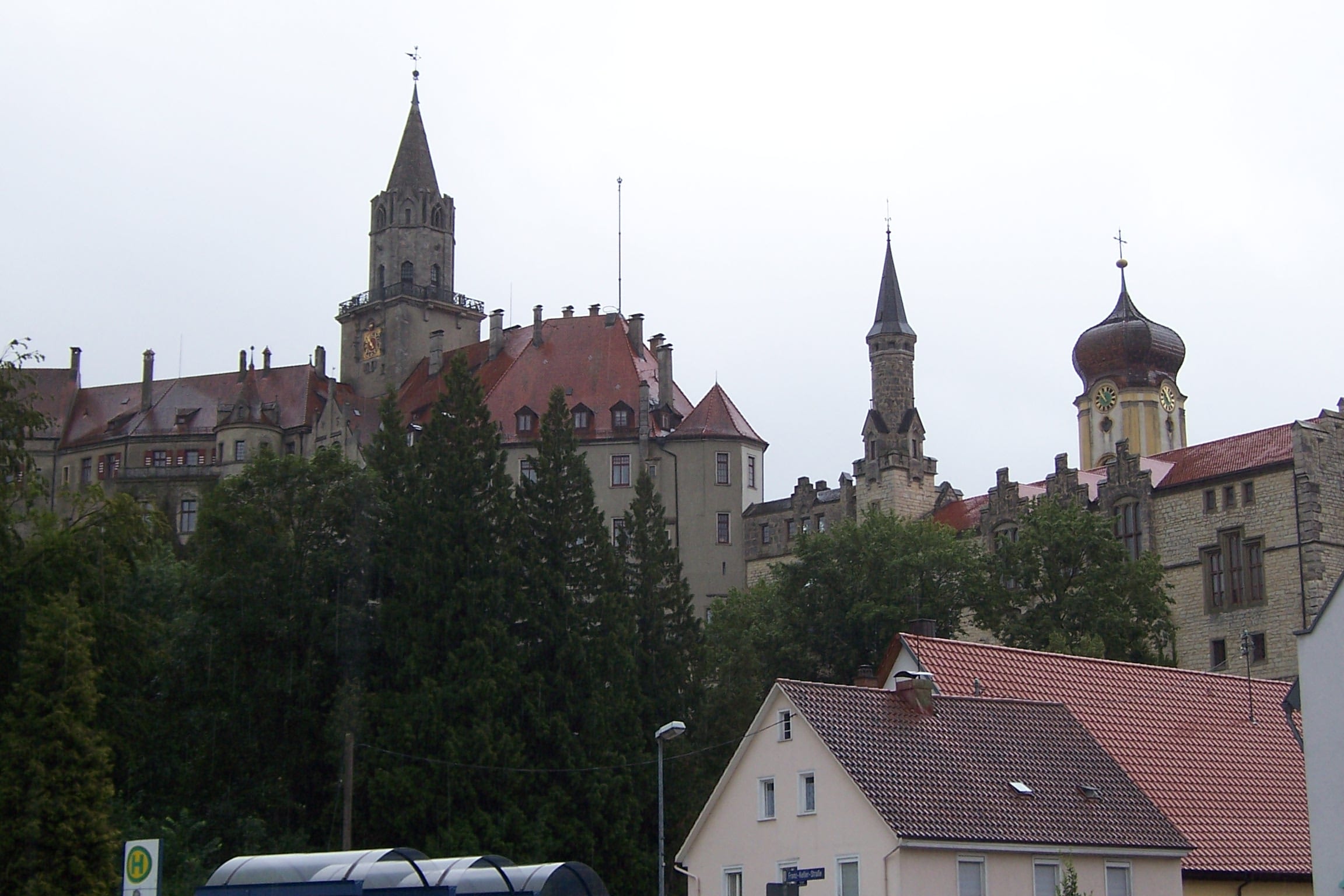 I passed a couple of cyclists for the third day running, who are also doing the Danube Cycleway. Whilst the sky wasn't clear, the rain held off, and I passed through some pretty country side with outstanding churches and quaint villages. I knew that Ulm, my planned destination, didn't have a campsite, so no matter what happened, i would be staying in a hotel or Gasthaus for the night.

I decided on one called Gasthof Lindenmeir which is in Blaustein, the village before Ulm. And I'm glad I did. For 31 Euros it's a brilliant room, with TV, shower, and kitchen… luxury! I've washed some of my more incredibly smelling clothes in the shower, and i decided to type this up ready to be uploaded whenever I get internet access next. 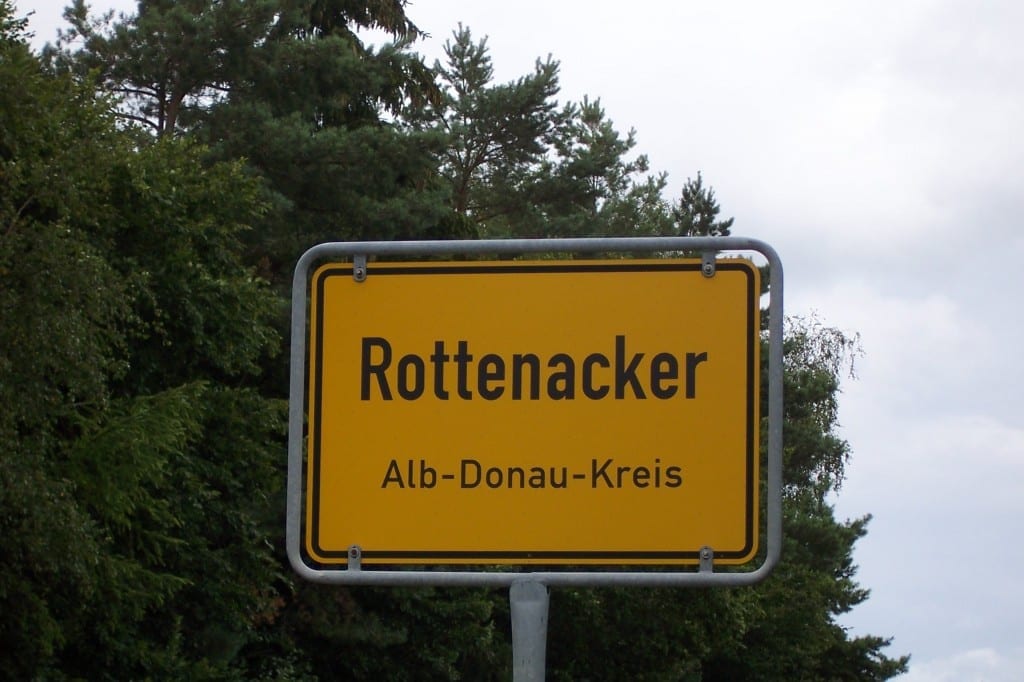 And here we have the most appropriately named town ever for a cycle route. 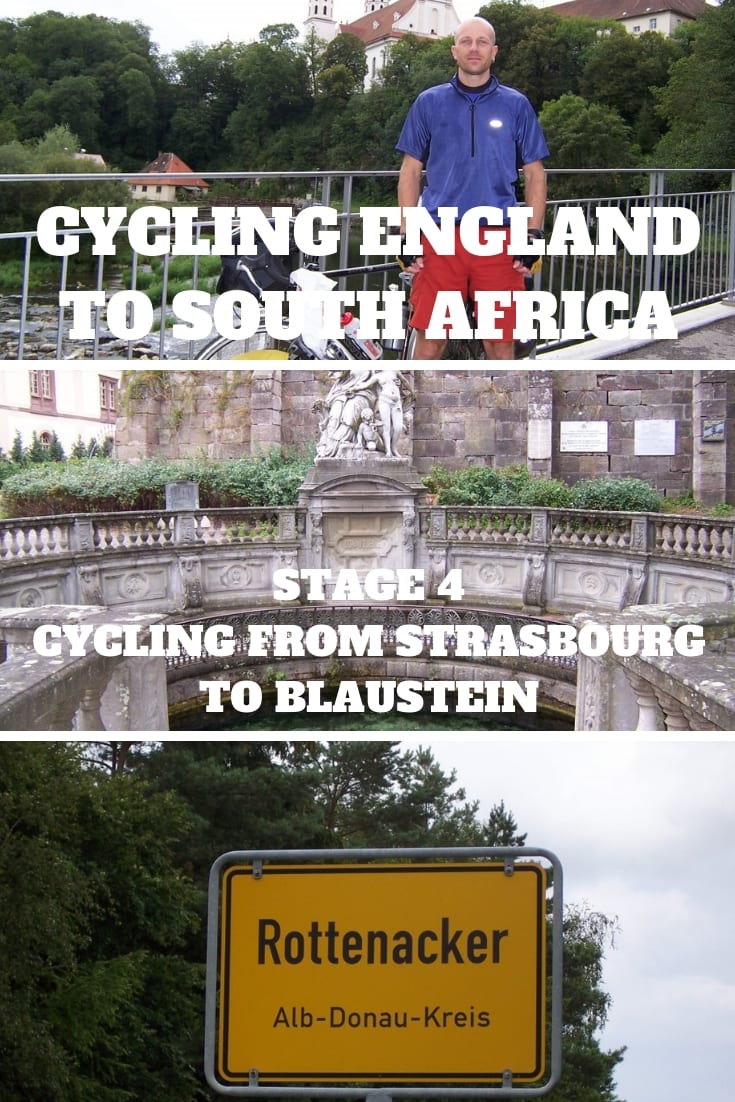 If you would like to read more blog posts from the bike tour from England to South Africa, use the links below.