Last Updated On August 11, 2022 by Dave Briggs Leave a Comment

Continuing my bicycle tour from England to South Africa, it was time to leave Istanbul and start cycling across Turkey. Here's the update from cycling Istanbul to Ankara.

There are a few different routes that cyclists can taking when biking Turkey between Istanbul and Ankara. The route described in the blog post below took me away from the main road out of Istanbul, although not totally away from the cars and traffic!

The total distance cycled between Istanbul and Ankara was about 516kms. You can see the rough route I took here on Google Maps: Istanbul Ankara. 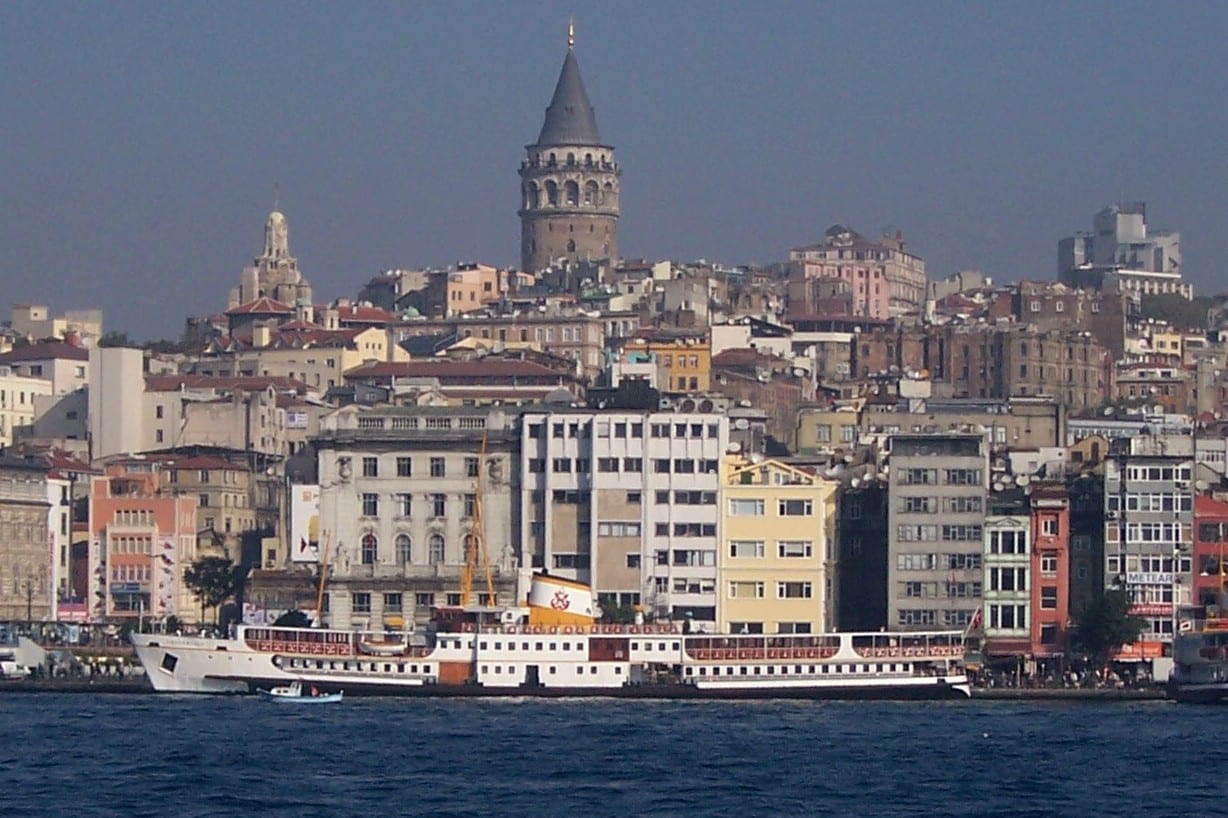 After leaving the hostel, I caught the ferry over to the Asian side, so I am now officially on a different continent.

Istanbul also stretches on to that side, and so it was the usual, clueless madcap exit from a city with no maps which I've come to love so much.

Along the way, I met a German cyclist called Rainhard, and we cycled the rest of the day together.

There were some quite tough climbs but also some great views, and it did feel good to be back on the road again. As it neared dark, we found a campsite in Akcakese.

Rainhard and myself started off cycling together, but it some became clear that we had different cycling speeds and styles.

The hills were extremely challenging, but it was obvious I was a far stronger rider, and it was putting Rainhard under stress trying to keep up, and me under stress having to stop for him all the time.

We decided to separate, which was a shame, as we were both going along the same route, but it was for the best.

I think I made the right decision when I planned the trip to cycle by myself, as although its good to meet up with people from time to time, I prefer the freedom of the road at my own speed and in my own company.

Anyway, the rest of the day was quite hard work, but with rewarding views to compensate.

The sun was blazing hot all day, and I think that, combined with the exertions on the climbs, may have given me a little heatstroke.

I recognised the signs for what they were though, and booked into a seven pounds hotel in Kandira and caned a load of water.

Mum sent me a text in the evening, and it appears I have been on the receiving end of a credit card fraud, so I had to phone up the Halifax and sort that out.

Hopefully, its now all under control, although it does mean that I haven't got a credit card on me, so at some point, I'll need one sending out to me. I'll perhaps get one sent out to Egypt with some more bicycle spares.

It's quite difficult to sum up the day really. I started off feeling strong, and made good time to Kaynarca.

Cycling through the town, my chain snapped, however.

Luckily, there was a bicycle mechanic who tried to add a link, but this snapped within 200 metres. I took the bike back to him, and he fitted my spare chain – all this was for free. Thank you matey boy!!

With no spare chain, and unsure if this one would hold, I decided to re-route and head towards Ankara. Although I wouldn't reach it for a few days, I was hoping that Ankara would sell good quality Shimano chains

, and the special pins to go with them.

I spent the rest of the day in a pretty negative frame of mind, which isn't like me, but there you go.

What if the new chain isn't fitted properly?

What if it goes in the middle of nowhere?

What if it goes in the middle of nowhere in Sudan?

Have I got the kit to do it myself?

What if something else goes wrong?

What about my lack of cash?

What about the credit card problem?

It's all in the mind

Cycling is a good way to travel, as it gives you time to think, but in this case, it wasn't for the best!

It didn't help that not only did the guy in Istanbul who serviced my bicycle sting me on the price, he seemed to have done a bad job.

It's just a matter of trying to balance things out in your mind when things like this happen.

At the end of the day, things worked out for me and I am sure they will again if something else should happen.

The chain could have snapped in a much more remote place, and if it did? Then I would just have to hitch a ride into a town if I hadn't got the spares. It's all in a days work when you are cycling from England to South Africa!

I made the most of breakfast, and left in a more positive frame of mind. I'm still wary about putting too much strain on the chain, but if that's all I've got to worry about, then its an easy life really.

Anyway, back to the cycling! After a bit of climbing came a couple of hours of flat road, which was a shock to the system.

Its been well over a month since I've had any decent stretches of flat road, and it felt good to eat up the miles.

It couldn't last forever though, and another hard climb which lasted a couple of hours followed.

The rewarding views were non-existent because I was in the clouds, which was a shame.

After the descent, I noticed a tail wind pick up, so I decided to carry on and make the most of it. It could be against me tomorrow!

I got somewhere between Bolu and Gerede, and started to look for somewhere to wild camp, but there was nowhere suitable.

Then, I caught sight of a sign saying Otel. It was joined onto a truckstop, so I went in.

I asked the owner about the otel, but it had been closed down for sometime,but the look of disappointment on my face must have worked things in my favour.

The owner fed me, and then showed me to the least smeggy of the disused rooms.

This place has to rate as one of the most incredible that I have ever stayed in! The room was bare concrete with a mouldy old sofa for a bed, but the bathroom was the best thing of all, with its inch thick layer of green mould covering everything. Quality! 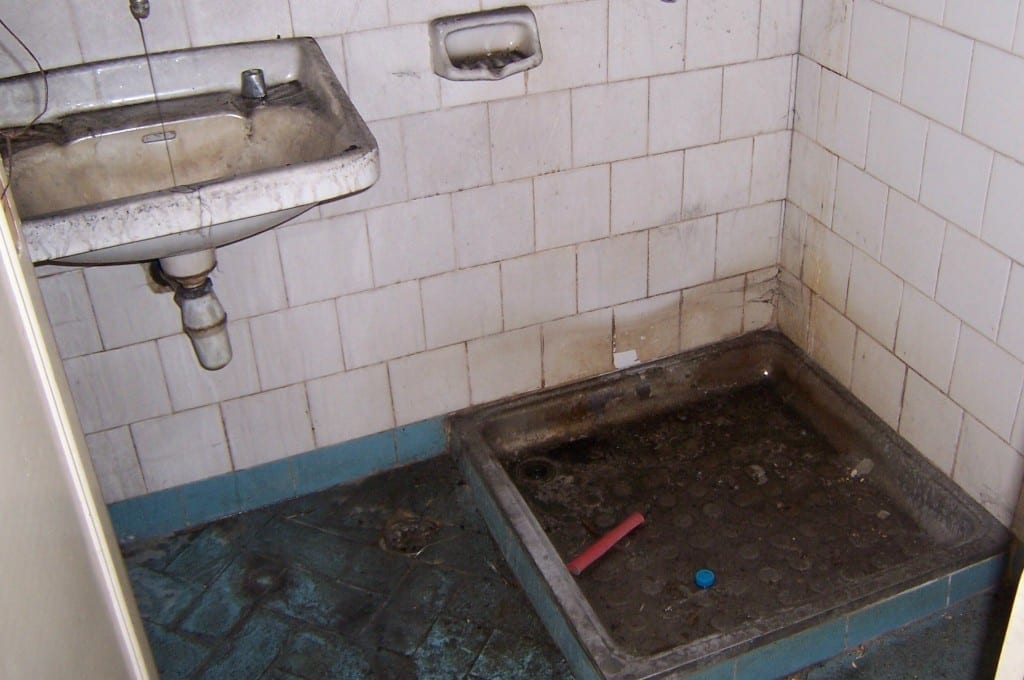 I went down for a cup of chai in the morning, and when I asked to pay for the night, Kamil the owner said it was a gift. Thank you very much!

Moments like that make travelling a real honour sometimes. And really, the world is made up of good people who want to treat each other well, you just have to see through the layers of selfishness sometimes.

Anyway, firmly mounted back on the beast of good luck, I got on with the days cycling. I've changed my riding style, so that I no longer stand up on the pedals when going up hills in order to reduce the stress on the chain.

What this also means though, is that my legs now ache in new and interesting places! There was a great deal of climbing, and one of the towns I passed through was at 1500 metres, although thankfully I didn't have to climb from zero to get there!

After an initial hours climbing, it all seemed to be either downhill or flat. I'd forgotten how fast I can go on a good quality flat stretch of road!

I was making good time, so I decided to carry on all the way to Ankara. It was quite straight forwards, and I soon found myself in Ulus, which is where all the budget hotels are located.

I booked into Hotel Pinar for 25 lira a night, and its a good room. I've found an area with bicycle shops, so I'll sort out a couple of spare chains tomorrow, one Shimano chain, and one local chain, and restock from the supermarket.

As I walked down to the tourist information office, I saw Rainhard the German cyclist cycling along, so I stopped to chat to him for a while. Ironically, we both reached Ankara at the same time!

This was a day off in Ankara whilst i sorted out getting some spare Shimano chains which I did…. I Feel a lot happier now!! 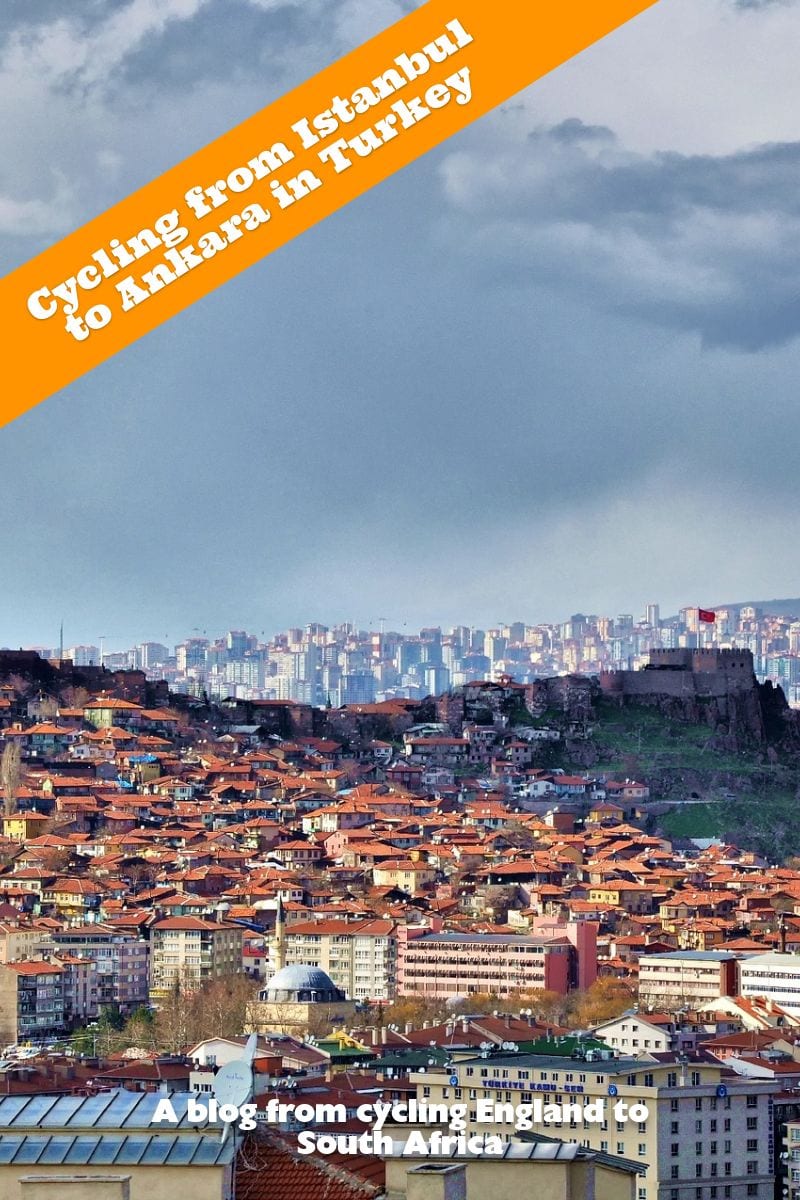