As part of my 2006 bike tour from England to South Africa, I cycled through the Middle East. This blog post covers my time cycling from Damascus to Petra.

Cycling from Syria to Jordan

Note: I was fortunate to have cycled in Syria before the devastating civil war which broke out some years after. During my time there, I experienced incredible hospitality and even described it as one of my favourite countries to cycle in.

This blog post was written during my bicycle tour, with notes added every day. In 2020, I tidied up the formatting to make it look neater, but the content is the same.

Cycling from Damascus to Jordan

An uneventful day. The cycling was easy, and I covered the 100 kms to Daraa quickly, where I booked into a hotel for the night.

Daraa is the last town in Syria, a country which I have really enjoyed cycling through, and hope to return to one day.

Another day, another country! As far as border crossings go, it all went pretty smoothly, and I managed to exchange my excess Syrian pounds easily on the Jordanian side.

There were three other Europeans crossing the border at the same time. Another French woman walking to Jerusalem (it has to be a French thing!), and a German couple travelling by a self converted camper van.

The cycling from the border, although only 60kms, seemed to take forever into Jerash, but a massive descent when I got to the town meant that I must have been climbing for quite a while, which explained everything.

Some of the roads can be deceptive, in that it looks like it is level or even downhill, but you are actually going up. Anyway, Jerash was a bit crazy, and a superb accident was blocking one of the very narrow streets which gave everybody a legitimate reason to use their horns, as the whole town came to a gridlock standstill.

Had a couple of schwarmas,and headed out of town to where I had heard there was a campsite. Along the way, a guy selling olives at the side of the road called me over, and gave me some food and chai. There was at least equal amounts of sugar to water in the chai – excellent!

He was also selling all sorts of natural remedies, at least that's what I assume they were from my less than basic grasp of Arabic and human gestures. I must have tried a sample of everything before I left him, so in theory it is now impossible for me to get ill! (Famous last words I fear!).

I offered to pay him for everything, but he said it was a gift. I've never experienced such genuine hospitality from people before visiting Syria and Jordan, and its a little humbling.

The hill up to the campsite was incredibly steep, and I had to push the bike some of the way. Booked in, set the tent up, and planned my route through Jordan. Had a feeling of calm and satisfaction all night. Not sure why, but it felt good.

Had a huge (couple of) meals the previous night, and a superb breakfast in the morning. Cornflakes have never tasted so good! The campsite was way up in the hills, so I basically glided back down to Jerash without using the pedals.

I had intended to see the ruins before cycling on to Amman, but they wanted a ridiculous, to my mind anyway, 8 JD, so i didn't bother, and carried on.

There was a lot more downhill, but it soon became obvious that I was deep in a valley, and there's only one way out…. up! The 50 or so kms to Amman was hard work after that, as the hills that the city is built on are outrageously steep, and again, I had to get off and push.

Somehow found my way to the downtown area, where the sites and cheap hotels are, and found myself a suitably dingy abode for a couple of nights. Stayed up very, very late (4.00 am sleeping time!) redesigning the home page of my website with this new layout. 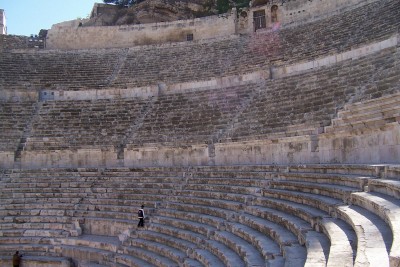 I visited the Roman theatre which is Amman's main attraction I suppose, and it was quite nice sitting up in the Gods, soaking up some sun, and not having to cycle! Did quite a lot of eating during the day.. there is definitely a fat bloke in me waiting to get out!

I got off to a reasonably early start to avoid the city traffic, and made my way out of Amman. After that, it was just a short, easy ride to Madaba. I am now cycling along the Kings Highway, which will be a companion until I reach Petra.

In Madaba, I had a look at a couple of places, and decided to go with Lulus Bed and Breakfast. Had an ace shower, (the one in Amman was rubbish), and downed cup after cup of free coffee.

There are a couple of touristy things to do here, but couldn't be bothered, so I didn't. Stocked up on food, wandered around the town, ate some schwarmas, and watched some TV.

Cycling the Kings Highway in Jordan

Quite a challenging day. I cycled along the Kings Highway heading south once more, and had to go down, and then back up, two gorges.

The second one was massive, and its nickname is the Grand Canyon of Jordon, (official name Wadi Mujib). It took me ten minutes to descend and an hour and a half to get back up again. Reached Karak later in the afternoon and booked into a hotel with aching legs.

Another difficult day, with a deep wide Wadi (gorge) to cross. The whole kids throwing stones thing, which has been a part of cycling through Jordan unfortunately, was a real pain in the arse between Tafila and Dana.

At the end of a long, hard day, its difficult for me to keep my temper, and eventually, I had to throw a rock back at one of the little bastards. Strike!! Made me feel a little better.

The only thing I can suggest to other cyclists who may be thinking of cycling along the Kings Highway in Jordan, is to try to cycle when the kids are in school. If you happen to be cycling through a town when they are just leaving, its a nightmare.

Not that I felt physically in danger, its more insulting than anything else. One of the joys of cycling is to wave and say hello to people, but it gets to the stage where you think to yourself why bother if they are just going to launch a stone at you behind your back.

Don't get me wrong, its not all of them, by any means, but enough to an unneeded stress to the day.

The only reasons that I can work out for them doing it are – A) As they actually have almost no bicycles here in Jordan, anybody, especially a tourist on a bicycle, is  a complete oddity and B) It's in their culture, as they throw stones at each other as well.

There's no real malice in it, just cheekiness. Its given me mixed feelings about Jordan, and although the majority of people are overwhelmingly hospitable, once I have left Jordan, I would never consider returning.

Anyway, when I eventually reached Dana, I booked into one hotel, but spent the evening at another one, where I had a meal, litres of chai, and chatted late into the night with the other guests.

Cycling to Petra in Jordan

After the initial struggle back up the steepest hill in the world, I was on the Kings Highway once more, and heading south to Petra. Easy, fast cycling.

The Belgian guys who I had been chatting with the night before passed me at about 12.00 in their car. Their hangovers must have been quite bad, as between three of them, they had consumed 4 bottles of wine and a bottle of vodka the previous night.

I had a look at a couple of hotels in Petra, and booked into the Valentine hotel for three nights. Used the net and made some calls.

There was an Aussie girl staying in the hotel, and we talked a bit about the Muslim men's attitude towards western women as she was getting a bit of hassle from an ‘admirer'.

As a male, its something I witness, but not know how it feels. It must be hard for western women to travel alone through Muslim countries, as its a real culture clash.

In western countries, women are treated as men's equals, with their own minds and decisions (well, its getting there I suppose!!). In the rest of the world, however, women are very much second class citizens, to be rarely seen or heard.

This leads the Muslim men to believe that western women are easy lays and fair game. Of course, it doesn't help when western women have one night stands with the locals, as it only feeds the situation. Anyway, its not really got anything to do with me, so nuff said!