This blog covers my time cycling from Lusaka to Livingstone in Zambia as part of my bicycle tour from England to South Africa.

In April of 2007, I saw myself cycling through Zambia as part of my bike tour from England to South Africa. This is my diary entry from the day, reformatted in 2020 for ease of reading.

The distance I cycled between Lusaka and Livingstone was about 500 KMS. I covered this distance with 4 days of cycling.

You can see the rough route I followed from Lusaka to Livingstone in the map below:

A reasonably early start, and the first two hours were some of the easiest cycling that I have ever done, mainly due to a strong tailwind and a downhill section, which was a bit of a Brucie bonus.

Ross and Christine had started off before me, and I found them having breakfast at the side of the road just past the town of Kafue. After a quick chat, I left them eating, and carried on, thinking that I would see them at some other point during the day, but as it turned out, that never happened.

My original destination was going to be the town of Mazabako, where I had heard that there was a campsite on the south side of town, but after 10 kms, it became apparent that it wasn't there.

I was feeling pretty good, so I decided to carry on to the town of Monze, where I successfully found the Moorings campsite. It was a pretty big day all told, with over 170kms, and although I felt ok,

I'm not sure how the bike was feeling, as there were some strange noises going on with the pedals. At least I hope its the pedals, because if its the bottom bracket, then I'm screwed, as I have no idea how it works or how to repair it.

I had a really sound nights sleep last night, but then near exhaustion will do that to you!

Today's cycling was pretty, well, boring actually. The landscape was uninspiring, there weren't many people around, and even a puncture failed to break the monotony of it.

In Choma, I decided to opt for a guest house in the centre so that I could use the internet for entertainment, as the campsite was on the edge of town.

The road was smooth, there was a tailwind, and the going was extremely fast. I made the small town of Zimba for 12.00, and although I had plenty of time and energy to carry on to Livingstone, the guest house was only charging 6 USD for a big room with a TV and bathroom, so I decided to stay.

Watched a lot of films on the laptop. Hard life. 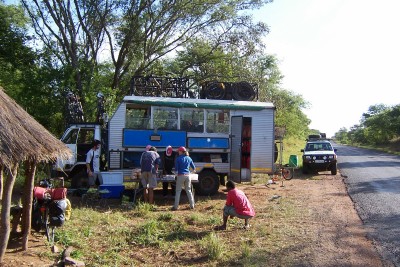 On leaving Zimba, the road turned inexplicably crap, which was a shame, but at least it meant that I had to concentrate! After an hour, a couple of trucks passed by, who were the support crew for the Tour D'Afrique, and said that they were setting up a lunch stop for the riders, and that I was welcome to stop by.

Half an hour later, I was eating free food and talking to the crew.

Now I've heard differing stories about the Tour (called by some the Tour of Freaks!), but the support crew seemed nice enough, and after I'd helped myself to as much as I could eat, I decided to carry on before the cyclists arrived.

Since leaving Lilongwe, I have been determined to reach Livingstone before the Tour, so I was a bit disappointed when one rider whizzed past me on the outskirts of the town, but it's not like he was carrying any luggage, and he did have legs like tree trunks!

I found Jollyboys backpackers at 11.00, and booked myself in to camp for three nights. A bit later in the day, Ross and Christine turned up.

Chris had been ill because of a reaction to the medication she was given for malaria, but they still managed to do a day of 190kms to get into Livingstone… Give her a medal now! 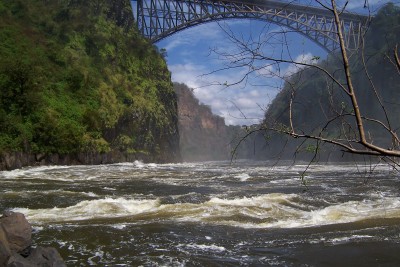 It's come to my attention that I may have miscounted the days that I have been away, and have either skipped or added the number of days taken on this trip… If someone would be so kind as to read the whole travelogue and let me know where I went wrong, it would be most appreciated, as I can't really be arsed right now.

Anyhow, today I visited Victoria Falls. There were a couple of walks you could do around the site, and one of the first places I visited was nicknamed the boiling pot.

The picture to the left shows where the water tumbles off the falls and then flows very rapidly against a rock face, creating whirlpools and fast flowing currents.

The bridge in the picture is where various idiots throw themselves off attached to lengths of rubber and scream there heads off as they bounce up and down above the water. 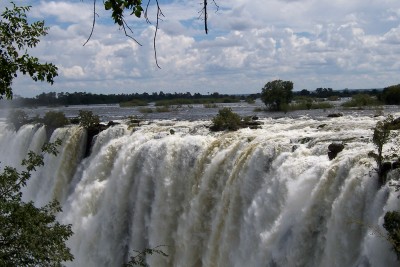 Victoria falls themselves were pretty awesome, although the were difficult to see in their entirety because of the amount of spray they throw up.

There are helicopter rides which give an amazing view of the whole of Victoria falls, but they also cost an amazing price as well.

There has been a lot of rain in the region over the last few months, and so there is a massive amount of water. One of the walks takes you over a bridge near to the falls, and I ended up drenched within seconds, but it gives you a good idea of the sheer power of mother nature.

Still, there's only so long you can look at water tumbling from a very high thing to a very low thing, and so I went back to town.

My brother left me a message in the guest book saying that he wants to come over to Cape Town, which should be good fun, although it does mean that I now have to make some sort of schedule and keep it.

I figure that I should reach Cape Town for around May 23rd, and will book my flight back to England for the 30th of May I think.

A day off from cycling, and really a do nothing day. I will repair some inner tubes, wash some clothes, maybe wash myself, and generally veg out. The next update should come in a weeks time from Gabarone, the capital of Botswana.