This bike touring blog covers my experiences of cycling from Petra in Jordan to Suez in Egypt as part of my 2006 England to South Africa bicycle tour. 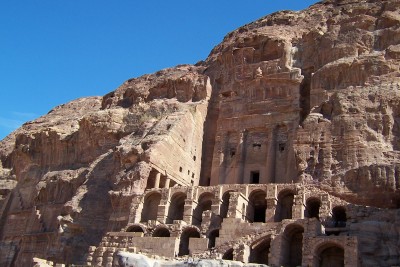 This blog post picks up where I last left off. I had arrived in Petra by bicycle, and so decided to take some time to see the famous archaeological site.

I spent the day sight seeing around the archaeological complex of Petra. The approach to the site is down a long, narrow canyon with high walls, and at the end, is the first building which is known as the Treasury.

A massive building carved out of the rock, it really is an impressive sight, especially with the sun illuminating it first thing in the morning.

After that, I climbed up to the Place of High Sacrifice (ace name!), which had some great views.

Even though there were quite a few tourists around, the site of Petra is so huge, that it is still possible to escape them and find a quiet place to sit and think.

One of the things that I have enjoyed most from this bike tour, is the time that I have had to think, especially during the cycling. They're not particularly important thoughts, but I like to think them anyway.

I got talking to a Dutch couple last night, who were quite interesting people. They'd travelled to similar places that I had, and it was funny to remember back to previous trips and compare it with other peoples memories.

Yeah, it was an evening well spent talking… something people rarely get a chance to do when they are wrapped up in the stress of everyday life.

In the morning, I took the free transport from the hostel back to the Petra site, and walked back through the canyon and to the very far end of the site to begin the walk up to ‘The Monastary' or ‘Ad-Deir'. 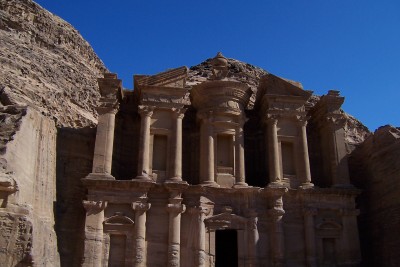 It looked similar to the Treasury but was bigger, and had some stunning views out over the land below. I spent quite a while up there, but when a bunch of tourists with kids in tow came trudging up the path, it was time to go!

As I walked down, the Dutch couple were coming up on donkeys – the lazy sods! I had a look around the rest of the site, and then took a taxi back to the hotel.

I must say that the evening dinners in the hostel were truly outstanding! The choice of film for the evening was Romeo and Juliet starring Leonardo D'Caprio. I though it was going to be awful, but I was pleasantly surprised when it turned out to be tolerably average.

Cycling from Petra in Jordan

Although I didn't think there was anymore ‘up' to go in Jordan, there was, so the first two or three hours were hard work. After that, it was much easier, as it was basically flat or downhill for the next 80kms.

I went through the town of Aqaba and to the campsite on the other side, where 4 JD a night paid for camping and breakfast.

After breakfast, I checked out the ferry times for the next day, and then hitched into town, where I did cultural activities such as using the internet and eating at Burger King.

After a nice breakfast, I made my way down to the ferry port. The process of buying a ticket was not as simple as it could have been, and to help out other people who may be reading this travelogue for information, here's what you have to do.

I was waiting outside, chuckling at bemused backpackers struggling through the same crazy, inept system, I saw a Dragoman bus.

Dragoman is a UK company that do overland tours for backpackers in huge buses, or in this case, a converted Class 2 truck to just about anywhere in the world.

I've always thought that I might like to work for a company like that for a while, and see what it's like. There seemed to be a fair mix of people on board, and I got chatting to an Aussie guy who had some interesting stories about working on a yacht for a while. Methinks I will see if anybody needs deckhands in South Africa, and try to sail home! (Sea-sickness permitting).

Ferry from Jordan to Egypt

Anyway, come 11.00ish, we boarded the ferry, and I tied my bike up down below to a pipe of some sort, and made my way back up to the main cabin, where I sat with the tour group.

It's funny how now, when I am travelling by bicycle, people go ‘wow' etc. I don't really see it as that big of a deal, as to be honest, up until now, its not been that hard. Once your mind is into the routine of cycling, its no problem. Anyway, halfway through the ferry journey, there was another routine to go through, which was …

Still, at least it didn't cost me any money that time. When we docked, there was a bit of waiting, and then i pushed my way to the front of the queue where they were letting people off first who had pieces of paper but no passports. Back downstairs to collect the bike, and leaving the ship, started another routine…

1. Take the piece of paper to the bank, where in exchange for that and some money, you receive two small stamps which are your visa.
2.Take the stamps to a building behind another bank, (signed only in Arabic) and knock on a door to the left.
3.Hand over your stamps, and identify your passport from a huge pile.
4. The man sticks the visas in and writes something.
5.Make your way to the arrivals section where a large group of customs officials will stare and point at your bike as though they have not seen one before.
5.Put bags though an x-ray machine.
6.Welcome to Egypt !!

I seemed to have my act particularly together, and was the first person through by a long way. Yay for me. I cycled out past the port and found a camp by the beach, where I paid 25 Egyptian pounds a night to stay in a bamboo hut, inclusive of breakfast. Marvelous.

A bit of a strained nights sleep, as I couldn't work out if the mosquitoes were buzzing inside the net or not. After breakfast, I told the guy I would stay a night longer, and cycled back out to the port to use the ATM machine.

Over lunch, I talked for a couple of hours to Dr. Shish Kebab (really). Spent the afternoon laying on the beach sheltering from the 27 degree sun in a cushioned reed shelter. I don't think people realise quite how hard cycling from England to South Africa is.

I'm cycling up the coast against a strong northerly wind, which is crap. The sea is on the right, but I would swap the scenery for a windbreak. There are many unused/falling down/being built camps and resorts along this stretch of coast but no tourists.

I have a bit of a cold which I must have pick up from the scummers on the ferry from Jordan. Not my best day.

I reached an army checkpoint at Taba, and asked if there was a hotel nearby, and they pointed the way. After leaving my bicycle near the tank parked outside, I spent ten minutes trying to get through the metal detector and into the reception.

The hotel wanted 45 US dollars that I haven't got though, so I cycled back to the checkpoint, and then took the road to Naqb. A long steep climb up on to the plateau of the Sinai desert.

Naqb was just a few houses which were all falling down, and one shop where I had to buy supplies at stupid prices. Even though I was knackered, I decided to soldier on until the end of the day towards Suez, and pulled over into the desert to wild camp when it got dark.

A nice early start, and I felt a bit more with it. The day was a long one of almost non-stop cycling, but the terrain wasn't too hard.

There were only two settlements with shops or places to eat along the way, so I made the most of them, and had two cheap meals of fuul and kofte. I was flagging towards the end of the day, and pulled over for another night in the desert. Proper sandy desert this one.

It got really cold during the night, and it was still chilly when I got going at 07.30. Pretty uneventful cycling/slog through the desert again.

At the tunnel going underneath the Suez canal, the police made me load the bike onto a pick up truck and ride through. It was fair enough, as there was only one lane.

On the other side (the African side!! new continent!!) I cycled into Suez and somehow found a hotel. I'm quite tired and exhausted after the last three days of cycling, which have all been high mileage and high temperature.

Somehow managed to eat six goat kebabs in front of a bemused kebab stand owner. Taking a day off tomorrow.