After months of planning, the first day of the bike tour from England to South Africa had finally arrived! This first blog post covers the section of cycling from Northampton to Dover. Despite the preparation, there were a few mishaps along the way!

Cycling from Northampton to Dover

Every journey starts with the first step, or in the case, turn of the pedals.  It was time to finally hit the road, and start the bike tour from England to South Africa!

I've been looking forwards to this cycling trip from England To South Africa for almost a year now, and it feels tremendous to be finally under-way. The first section, is cycling from Northampton to Dover.

I wanted an early start, as the weather had been unusually hot over the last week or so, and I set my alarm for five. I'd stayed the night at my brothers house (thanks Steve and Lowri!), although they weren't there, as they had taken the kids to visit my parents for the weekend. 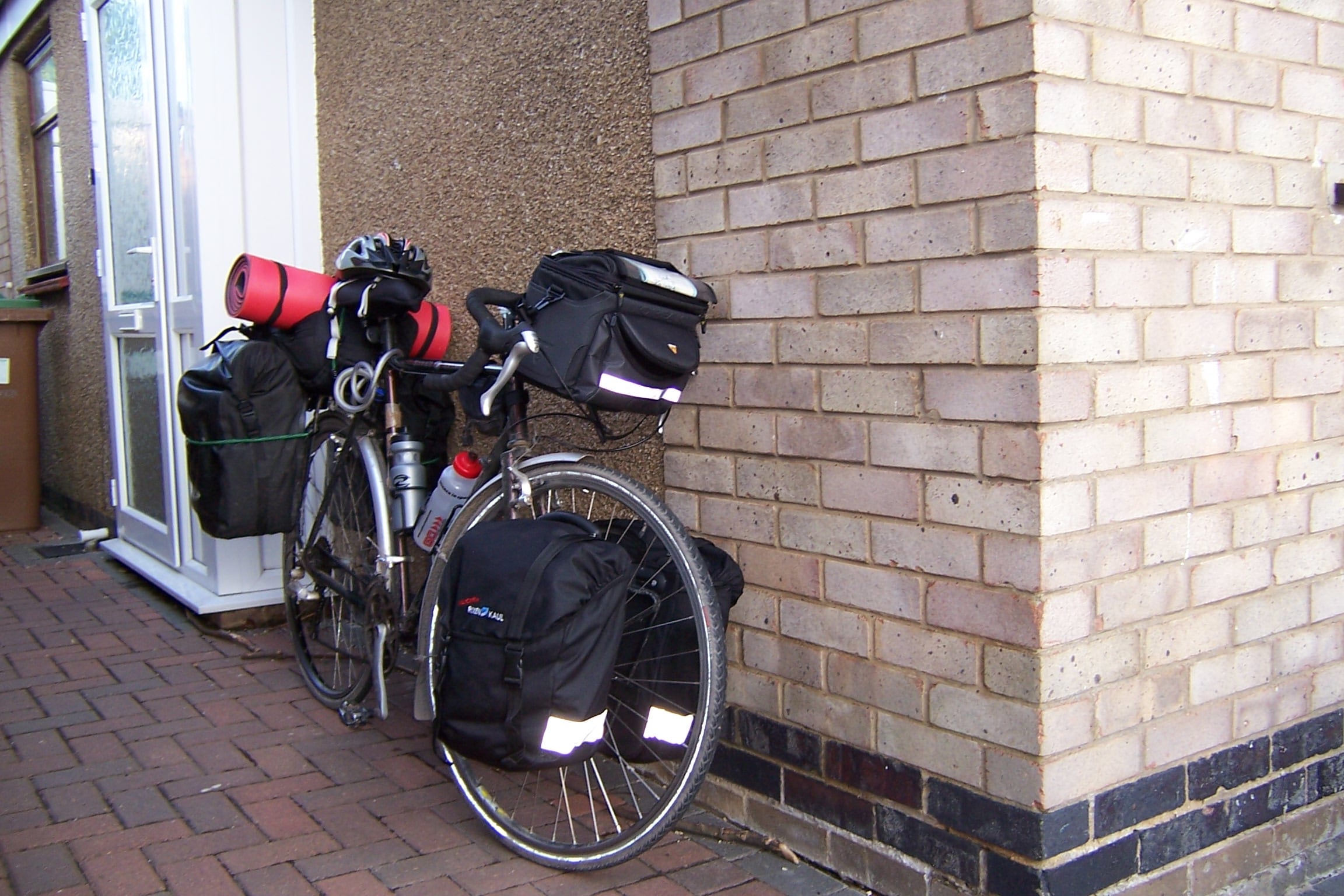 The day's cycling was reasonably uneventful – which is fine by me! The bike felt quite heavy when fully loaded, but I guess it's something that I'll get used too.

The weather was kind to me, with lots of cloud cover blocking the heat from the sun, and despite threatening too, it didn't rain, although I understand it was torrential in certain parts of Oxford.

It was a bit of a nightmare following the Sustrans route 51 cycle paths through Milton Keynes, as most of the signposts had been stolen.

I decided to just follow the main roads instead, and the thought crossed my mind a couple of times that if I had just done that to Oxford from Northampton in the first place, I would have cut 30 miles from my journey. Oh well, you live and learn. Well I live, anyway.

Whilst following the A34 towards Oxford, I saw a signpost for a caravan site, and followed it to the Diamond Caravan and Camping park near Islip, where I paid fifteen pounds for the privilege of setting up my own tent in a field, surrounded by families with loud, shouty children. After a shower, I walked to a pub where I had Sunday lunch… it's a hard life! 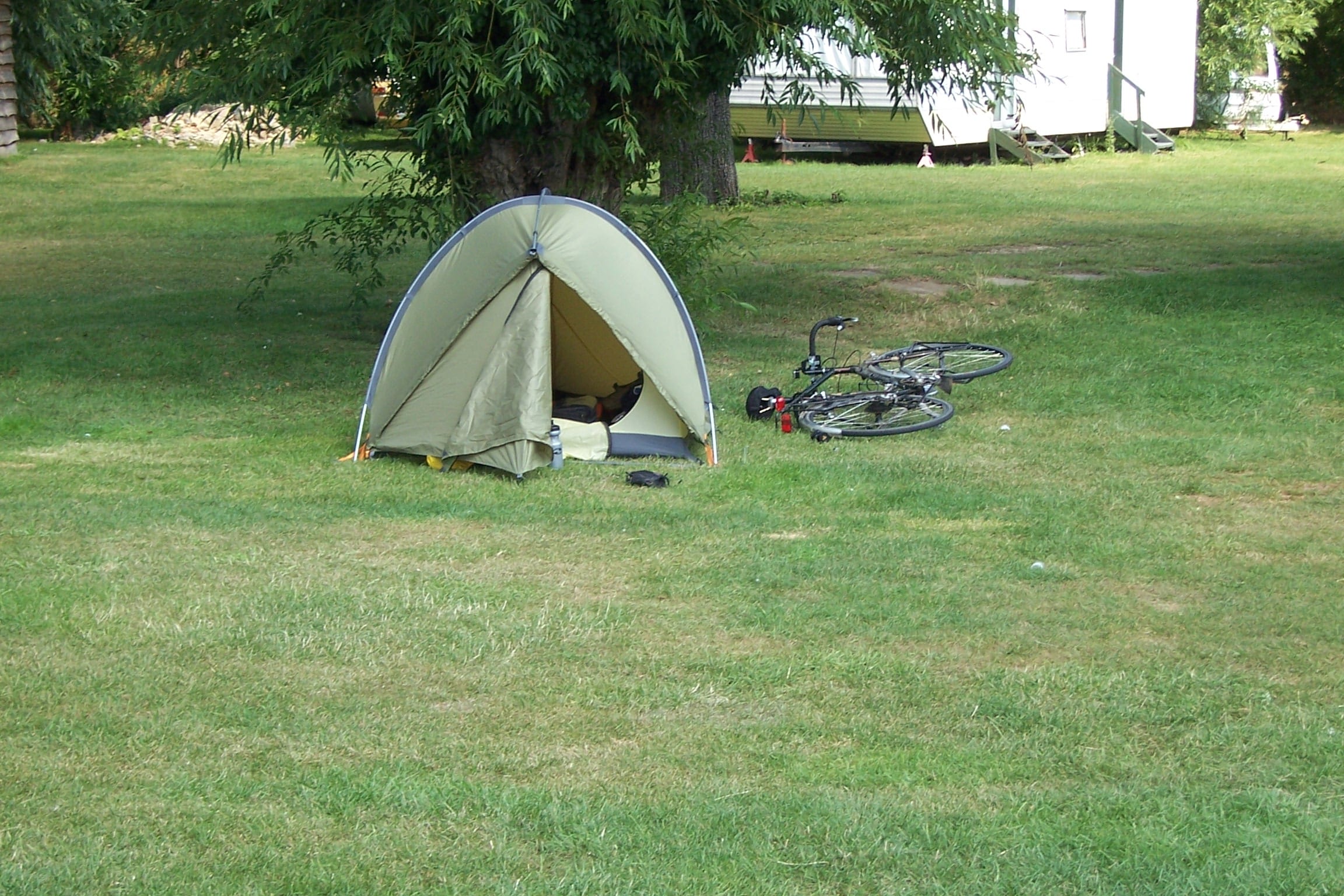 Well, I think there is only one word to sum up the days cycling effort… shit. It went wrong almost from the outset. I decided to take the A34 into Oxford rather than the Sustrans route, in what can only be described as a serious error of judgement.

The traffic was absolutely insane, and in several places, the hard shoulder disappeared, and because of the sheer volume of traffic and the narrow lanes, I had to resort to pushing the bike along the grass verges. There was lots of cursing and shaking of the head.

Eventually, I escaped the A34, and cycled into Oxford, where I easily picked up the Sustrans route 5, which would take me south. An hour into this route, I was just starting to think that things had improved, and I'd be able to make some time back up. Silly me.

Along the cycle track which ran parallel to a rail line, I started coming across big pools of blood. I'm no expert, but it looked only a few hours old.

Whatever had bled, couldn't have had a great deal of blood left in it, as I started coming across more and more of it. Maybe I was concentrating too much on the blood, maybe it was just bad luck, but I got my first puncture of the trip.

Terrific. I unloaded my bike, took the wheel off, and then spent a while trying to wrestle the tyre from the wheel. Finding that the tiniest piece of wire had pierced both tyre and inner tube, I decided to fit a new tube and repair the old one later.

During this time, people are passing backwards and forwards asking me if I've got a puncture (no, i just thought I'd take the wheel off for fun!), mentioning about the blood and commenting on the weather.

I see a cyclist go by who kindly asks if I have everything I need, and I respond yes, although I mutter that i am slowly losing my will to live!

The inner tube and tyre are eventually back on the wheel after another gargantuan wrestling effort, and then I start fumbling around with my Cyclair (copyright the crap company) cycling pump, which clearly does not want to inflate the tyre.

People come, people go, policeman ride by on bicycles asking questions, and another half hour passes as I struggle to get my pump to work. Whatever I do, I can't seem to inflate the damn tyre.

The cyclist from before returns, and says that the police have cordoned off part of the track where I have just been whilst they investigate an incident. I borrow the cyclists pump, but between us, we still can't get the thing to inflate. Worse still, the back tyre is going down now!

Bouncing buggery bollocks. Short on inner tubes, and with a broken Crapair pump in my hand, I am unwilling to spend any more time trying to fix it there and then (1.5 hours lost already at this point), so I decide to push the bike to Abingdon.

It's hot, its sweaty, the pedals bash against my legs and police helicopters hover overhead. I eventually made it to Abingdon for 12.00, and dumped my bike in a bike shop, asking them to replace and fit the two inner tubes front and back, fix my front rack, which has decided to become loose, and sell me a decent pump.

Sweating profusely (it's a scorcher) and covered in oil and cuts to my legs, I get changed in the shop, and wander into town, seriously wondering if I will even get out of the country, let alone make it to South Africa.

I later wrote this guide on how to choose the best bike pump for touring. A good read if you want to learn from my above mistakes!

Time for a meal

I have a nice meal which helps to cheer me up a bit, buy a book, a map, and find out there is a campsite close by. I collected my bike at two, and headed out to Clifton Hampden where the strange old lady that runs it let me have a pitch for five pounds, which made me feel a little happier.

After setting up camp, I sorted out a minor rear brake problem. So the days lessons learned were…

1. Inflate the spare tube a little before using it to make sure that both tube and pump work.

I never found out where the blood came from, but am convinced that something bad happened, and that its bad karma helped to screw up my day!

Well, today was a little more like it! There was a bit of a mist early in the morning, but it soon cleared when I set off. There were some steep climbs, but on a bike, you always get to speed down the other side, so it more than makes up for it.

That's why I think that jogging is so rubbish. When you run up a hill, you still have to run down the other side again… grow a brain people!

Stopped off at a place called Knowls Hill for an all day breakfast, and then carried on the cycle route to Maidenhead, (which gets the Dave Briggs award for having the best signposted Sustrans route yet).

Through Eton and Windsor, passed Staines and I arrived at Laleham, where I went to a campsite once more. Much of my ride was along the River Thames, and it's been that hot, that people were swimming in it.

I know it's supposed to be a very clean river nowadays, but I still have my reservations about it!

It was incredibly warm and humid today. Even packing the tent away at 6.00 am made me sweat, and the temperature and humidity built steadily throughout the day.

I left Laleham and followed the Sustrans route 4, which shadows the River Thames all the way to London. Most of the journey to Putney Bridge was quiet and tranquil, and I passed through Hampton, Kingston and Richmond.

Although I didn't reach Putney Bridge as fast as I wanted too, it was still reasonably early, so I made the decision to clear the city and get as far along my route as possible.

Despite not having a map, and no idea of where I was going, I somehow managed to get through London, and joined up with the A2 heading towards Dover.

The bicycle journey through London was not altogether pleasant, with a lot of traffic, oppressive heat and traffic lights, but it had to be done.

I made a few stops in petrol stations to stock up on fluids, but made it through ok. At some point, I'm not sure where, I joined back up with a Sustrans route 1, otherwise known as the Garden of England cycle route. 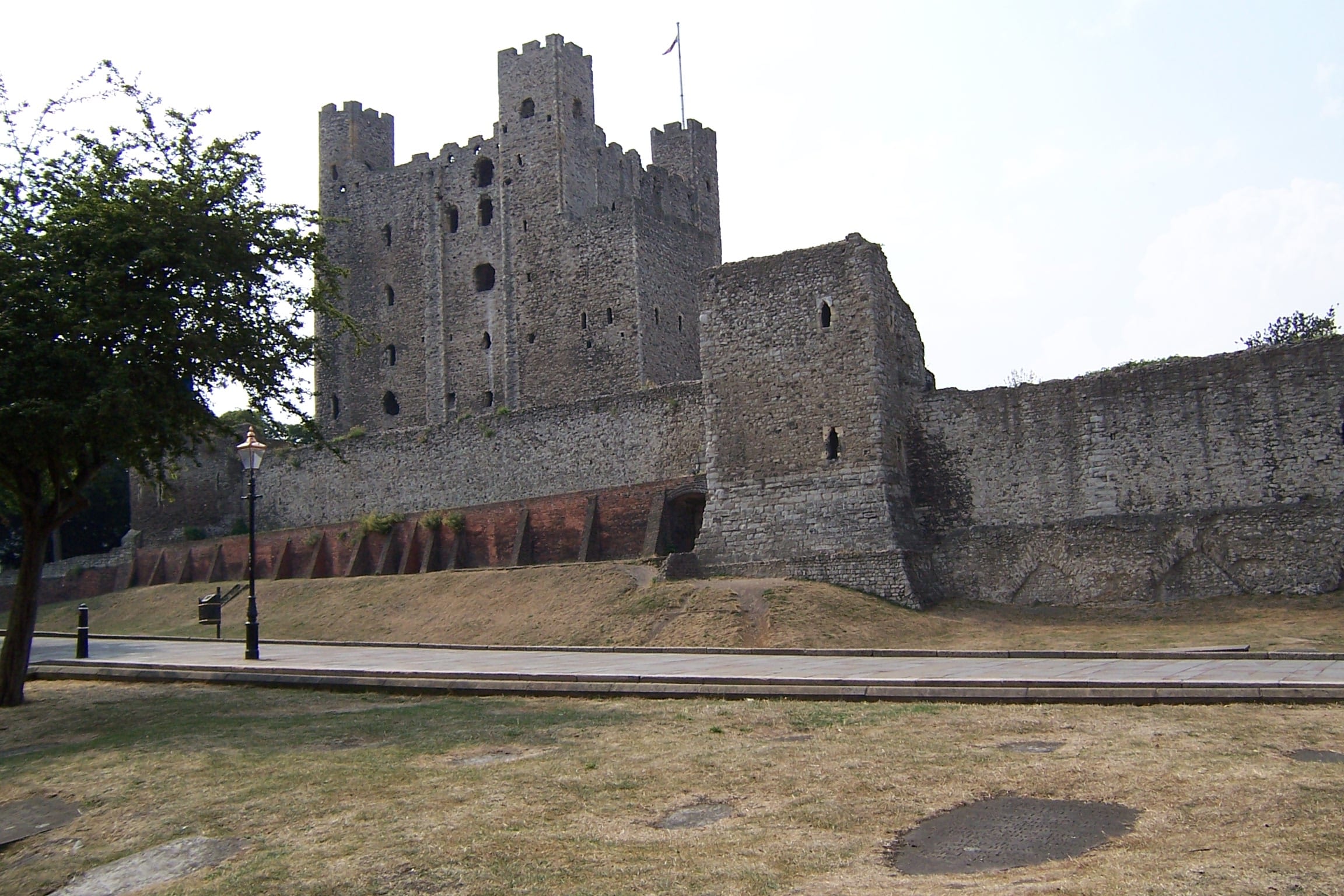 After much time and sweating, I made it to Rochester, and after taking a picture of the castle, I managed to find myself a bed and breakfast.

At £45 for the night it's certainly not cheap, but I was so exhausted, I didn't care. Had a lovely cold bath!

There is a certain satisfaction you get when you've had a hard physical day and you finally get to rest though that outweighs things like that.

Another monumental day's cycling! After a big breakfast (how am I ever going to survive without a full English!?) I set off with the intention of making it to Canterbury.

For some reason, I was flying along today, and I made Canterbury easily, so I pushed onward to Dover. The A2 decided to go up every big hill possible, but the descent in to Dover was worth it.

Booked into another B+B (where I am typing this up after ‘acquiring' free wireless access), and had a wander around town. This will be my last night in England for a while.

I get the ferry to France tomorrow, and I plan to stay the night in Calais, before embarking on the next stage of my journey which will take me across France and to the beginning of the River Danube section.

So, the first section cycling from Northampton to Dover was completed. On to the second section! 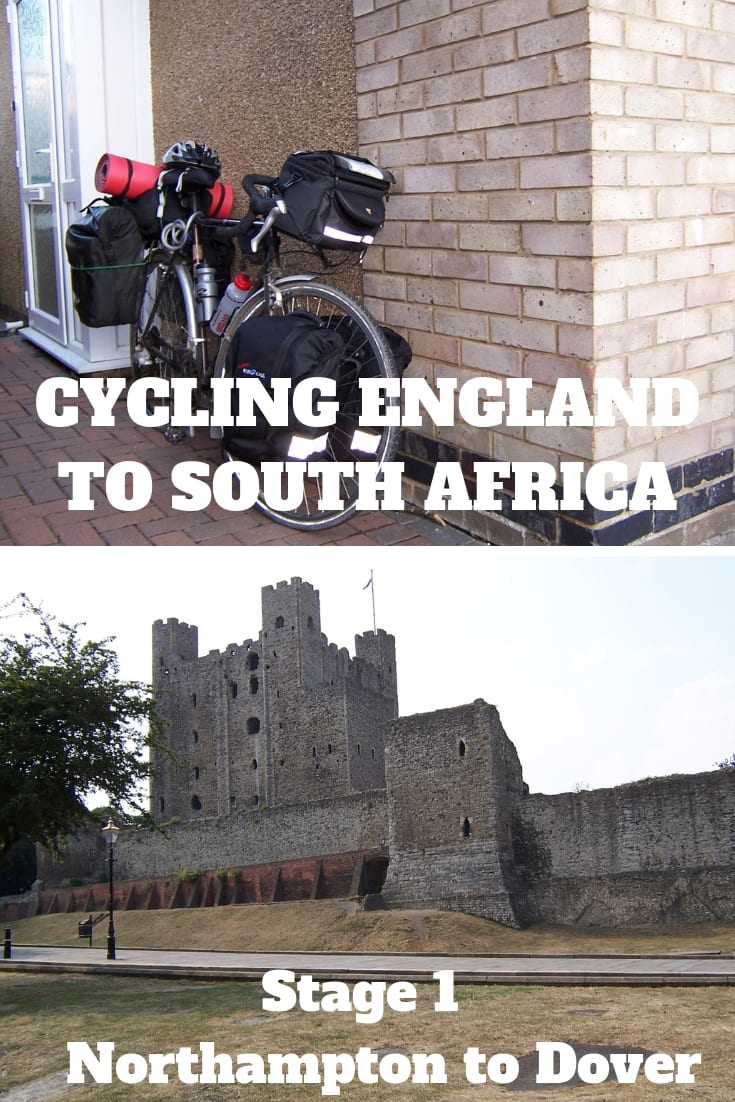