This bike touring blog covers my time cycling between Livingstone in Zambia and Gaborone in Botswana. Part of my bike tour from England to South Africa.

Cycling from Zambia to Botswana

This blog post was written in 2007 during my bicycle tour from England to South Africa. Although reformatted in 2020, the content remains the same.

I left just after 7.00, and cycled the 65kms to the ferry which would take me over the Zambezi and into Botswana.

It was really easy going, and I was fortunate enough to see some more elephants crossing the road just in front of me, although I was too slow to get the camera out and take any photos.

I had thought that by having three nights in Livingstone, the Tour de Freaks would have been a day ahead of me, but it seems that they also took two days off, and I met them again on the Zambia side of the river.

They are not a bad bunch of lycra lovers, but as there is only one road to Nata, it meant that I would be following them for the next couple of days.

The ferry ride over the river took little more than five minutes, and once in Botswana, I cycled into the town of Kasane, where I quickly discovered that things are not as cheap as the rest of Africa.

I met Ross and Christine who were outside a campsite, grumbling about how expensive it was. It seems that the going rate for camping in Botswana is nearly 10 USD, which is double the price that we were expecting.

There wasn't a lot of choice though, so we dived in, cycling past the beautifully kept lush green lawn around the chalets, to camp in the rock hard mud and dust tucked around the back.

Once I had set up, I phoned Steve up on Skype to see if he's still coming over to Cape Town, and stocked up on supplies. Back at the campsite, it started to spit with rain, so I went into my tent to read a book.

After ten minutes, I heard some noises which didn't sound right coming from Ross and Christine's camp. I went out to take a look, and through the trees, I could see one of their bags being dragged away.

Thinking that they were being robbed, I ran around to their camp ready for action, to find that it was actually a troop of baboons, who quickly legged it, leaving behind the items they were trying to steal. I put the stuff back in their camp, and went back around to my tent, only to hear the baboons return.

A couple of well aimed stones saw them off for good, and I hung around until Christine returned. I explained what had happened, and on closer inspection, it turned out that the baboons had actually ripped a large hole in their tent, which was not good news.

When Ross turned up he was not a happy chappy! The campsite management put them up in an onsite tent for the night, whilst they made gafa tape repairs to their own tent.

Ross and Christine decided to stay another night in Kasane as they wanted to put a day between themselves and the Tour. I understood where they were coming from, but I wanted to push on regardless.

I knew that this next section as I cycled towards Francistown would be quite hard work, as it involved three days of cycling over 160 kms a day, so it was better to just to get on with it.

The first 100 kms to the town of Pendamentaga went pretty quickly, and as I stocked up on food and liquid in the shop, I noticed that some of the tail enders of the Tour were also taking a break.

They said that they were heading to a bush camp some 60 kms further down the road, and invited me to stay there the night. I had planned to bush camp at about that distance anyway, so I decided to join them.

It was a little difficult to cycle after stuffing my face and drinking over 3 litres of water and juice, so the going was somewhat slower. A few hours later, I reached their bush camp, said hi to everyone, and set up camp. I spent the evening chatting to the people on the Tour, and hit the sack pretty early. 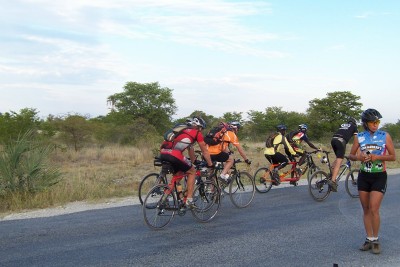 Off to a very early start, as there were a lot of kilometres to cover. Today was a bit of a grind, with boring roads, no elephants and samey scenery.

I cycled with some of the guys from the Tour for a while, and the conversation helped to relieve the boredom of the road. I reached Nata for two, stocked up with supplies, and then headed out to the Nata Lodge, which was the only place to camp in town.

This would be the last night that the Tour de Freak and myself would be on the same road, as the Tour heads towards Namibia. In the evening, a slight culinary error meant that I had chilli corned beef in Chelsea buns for dinner.

Cycling against the wind for 180 kms is wank.

Last night, I ended up in a campsite called Woodlands Stopover, as it was the first campsite that I had come across. It was 8 kms down a gravel track, and I just made it before dark.

I bought a Braii pack (bbq meat pack) from the shop and a stack of unburnable wood, and finally managed to get a fire going to cook it. With my stomach full with half cooked dead animal parts, it was time for bed.

In the morning, I woke up to discover that ants had eaten a hole in the bottom of my tent and were swarming around inside. Morning world!!

I killed as many as I could in a variety of pointlessly cruel and unusual ways, and packed my stuff up. Just 20kms cycling to the other side of Francistown, and I checked into the Marang Hotel's campsite for the night.

I spent some of the afternoon killing yet more ants in the tent, which I assume were part of the original contingent that had survived my initial onslaught.

A big, big day at over 190 kms. I was cycling pretty fast though – Like a rocket stuck up the backside of a bat out of hell chasing a speeding bullet. Or something like that.

I reached the campsite at Palapye for about three, and set up. Now sometimes, after a hard day on the bike, a couple of beers are in order, and today was one of those days.

Years of training have given me a certain tolerance to alcohol, and as I was quite thirsty anyway, the beers were going down well. After my fourth, I could see that it was going to be an alllnighter, and as other people were buying me drinks, I could hardly say no now, could I?

The evening turned into night, and only became more debauched after some electronic scales were plugged in to weigh a loud mouthed American girls breasts. (5kg).

There was dancing on the bar, (although no stage diving), and general acts of insanity. With double figures, not including shots, more than easily achieved, I called it a night at 1.00 am. Bar tab for the evening, including a steak, – 6 pounds. Thanks for the free beer guys!

Not surprisingly, I was in no condition to be cycling anywhere today. My excuse was that my legs needed a rest. One of the Afrikaans guys who had been drinking at the bar last night gave me a map of South Africa and let me use his phone to call home.

Its strange to think that i now call 80 kms a short day, but there we go, thats what it was. I've booked into a guesthouse for the night which is expensive for my budget, but I know that if I want to make Gaborone tomorrow which is 200 kms away, I could do with a little luxury tonight! 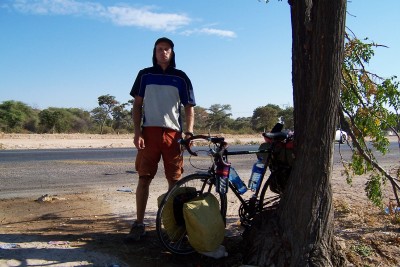 One of the longest days cycling of the trip so far at 200 kms. It wasn't too bad though as there were some nice smooth sections of road and a little tailwind at times, and it took me ten hours including breaks.

The  picture shows me standing by the road on the Tropic of Capricorn – Roadworks meant that I couldn't get to the official sign.

As usual, I seem incapable of smiling for a photograph, which is why i don't put too many of me on here!

I've booked into Citi-Camp for three nights, which is the only camping in Gaborone, although it is worryingly close to the Bull and Bush pub. Whilst here, I have to book my flight back to England from Cape Town, and give the bike a bit of a service.

Just a couple of notes –

Thanks Alan and Ange for pointing out that I had two Day 263's. It's on my list of things to fix when I get back.

Christine – One of the Tour guys picked up your cycling gloves at the border and gave them to me to give to you, as I thought I would see you guys in Francistown. I'll leave them with the reception at Citi-Camp. Good luck with the rest of your trip.

And so that's it for now. My next update should come from South Africa, the last country I will visit on this cycling trip, in a weeks time.