Last Updated On November 2, 2022 by Dave Briggs Leave a Comment

Stage two of my bike tour from England to South Africa includes the ferry crossing from Dover to Calais and some cycling in France. This was my first time of cycling on the right (wrong) side of the road, but it all went well!

Cycling from Calais to Charleville in France

With the first stage of cycling in England behind me, it was time to begin cycling across mainland Europe. This second stage of the bike tour from England to Africa follows my route from Calais to Charleville.

I updated my internet sites quite a bit last night, as I managed to pick up free wireless from some poor sod! Had a relatively late lay in until 07.00 and after a shower went down for yet another cooked breakfast.

The eat anything and everything cyclists diet is in full swing now! I could feel my legs and hands aching, but it was basically a cycle free day so no worries.

After stuffing my face, I went down to the ferry terminal, and after a bit of a wait, cycled onto the ferry. With the bike stowed below (I left my kit on it, but took the handlebar bag with my cash etc), I made my way straight to the food court.

Since breakfast, I'd only had one snack, so it was time to eat again. I settled for a two course lunch, which I piled on the plate myself to make a pyramid that the Egyptians would have been proud of!

After eating, it was time for a snooze, so I found myself a nice comfy sofa, and fell asleep for the duration of the voyage. And people think this travelling lark is hard!

When i woke up, we had one minute until we docked so I went down to the car dock and got my bike ready. Anyway, I am now in France!

It took  a few minutes to get used to the signpost system, but I soon cycled into Calais town centre, and after asking at the tourist information where the campsite was, I easily found it, and got a pitch for the night.

Did some hand washing, bought a map and another meal. Have to remember… Stay on the right!!

I was feeling quite strong today, so I put in another big day's ride, and made it to Lillers, which is just 12km short of Bethune. This means that I am two days ahead of my France schedule.

Most of the cycle ride was along the N43, which I would say is the equivalent of an English A road, but nowhere near as busy.

Cycling on the right is not proving to be a problem so far, especially now I've got used to the road-signs. It's not that they are radically different to the UK signs, just that they are so subtly different as to catch you out every now and again.

Much of the ride was over rolling countryside, and was quite picturesque. I stopped off at a Boulangerie for a cake and a drink 30kms in to the ride.

As I neared Lillers, I picked up signs for the Municipal campground, and followed them in, where I paid 4E for the night. That's more like it! Better than those thieving bastards in Islip who took 15 quid!

After I set up camp, I got some supplies in for the following day, just in case everything was closed on the Sunday. The weather was not as hot or humid as it had been back in England, and it felt quite pleasant to finish a ride and not be bathed in sweat!

Another good day's ride. Quite hilly at times, but enjoyable. I managed to get a chocolate eclair from a boulangerie on the way, so yay for me! Saw my first war memorials today, just outside of a village called Souchez. It was a commonwealth War Cemetery marking the dead of Vimy Ridge. 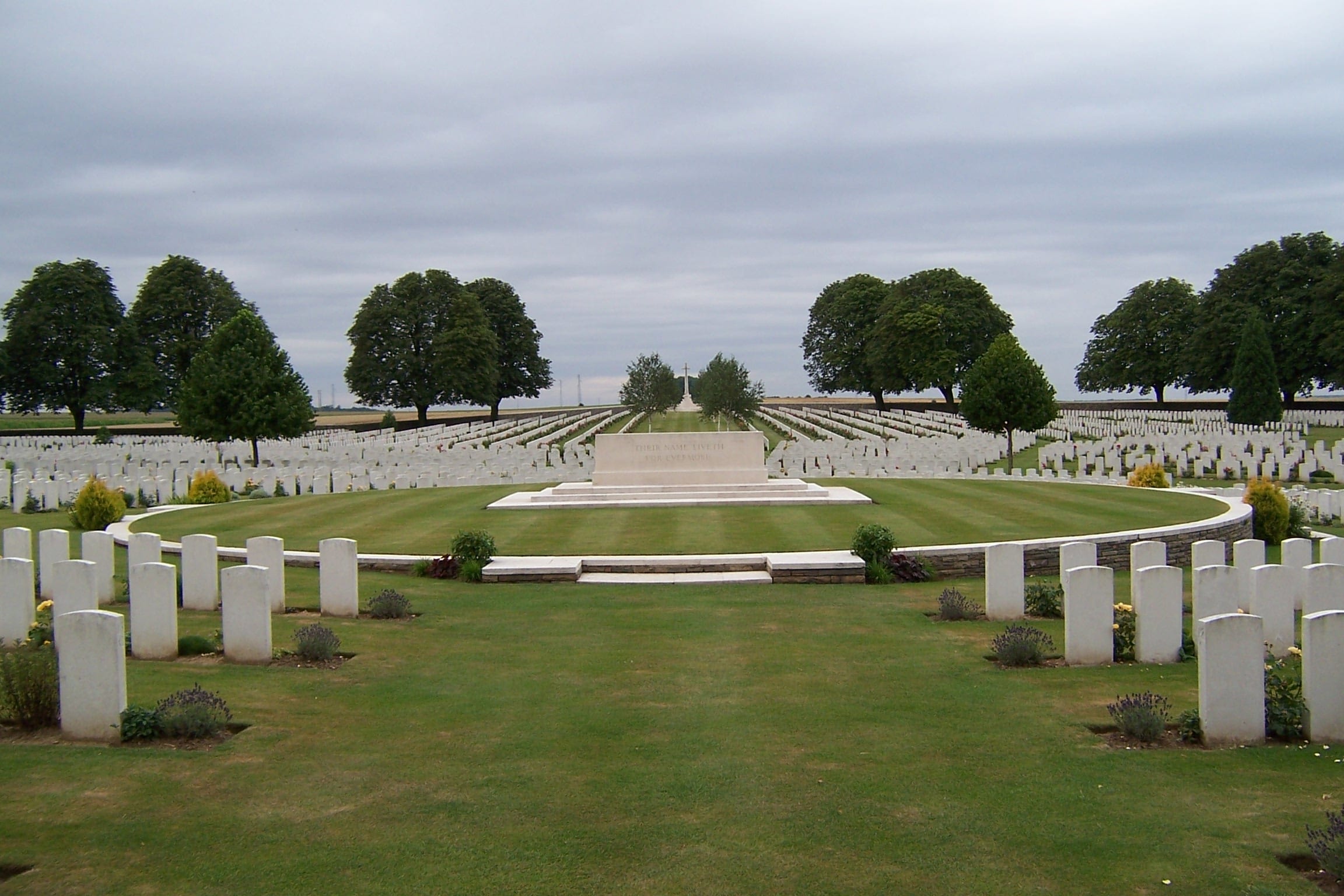 I saw line after line of graves as I rode up a hill, and my heart just kind of went. There were just so many.

The last two generations in Europe have been fortunate in that we haven't had to be part of a war on that large a scale, and long may it stay that way.

I checked the name register, and there was a Private Briggs from the Royal highlanders listed. I wonder if he was some distant relative? But then, we're all related, really. I carried on towards Cambrai, but stopped a few km's short at a village called Sauchy Lestree for the night.

A shorter day's ride today. The weather was a little rainy, but not too bad, although the hills were starting to wear me down.

It was another low spending day, (which means I'm due a splurge soon!), and the campsite only cost 3E for the night. Sweet.

I set up camp, and cycled into the town for supplies, only go be hampered by that great french tradition… The two hour lunch break. All the shops, including the supermarkets, were closed from 12-2. Incredible effort.

When i got back to the tent, the person in the pitch opposite me was playing the most amazing selection of organ recital music known to man. So far, everybody I've met has been really nice, and I'd like to think that my French is improving a little bit.

The day's weather was not so good today, but it did mean that i could wear my wet weather gear rather than just carry it around with me on the bike.

There's not a lot to report on the day's cycling, other than wind, rain and hills. At some point, between Signy le Petit and before Charleville I saw a sign saying Motel. It's 39E a night, inclusive of an evening meal and breakfast, so it seemed the wise move!

It was a really easy ride into Charleville, and i followed the signposts to the campground. I have had a bit of a wander around the town, bought a map for the next stage in France and am battling with a French keyboard, which is not a qwerty one. Why do the French have to be different? 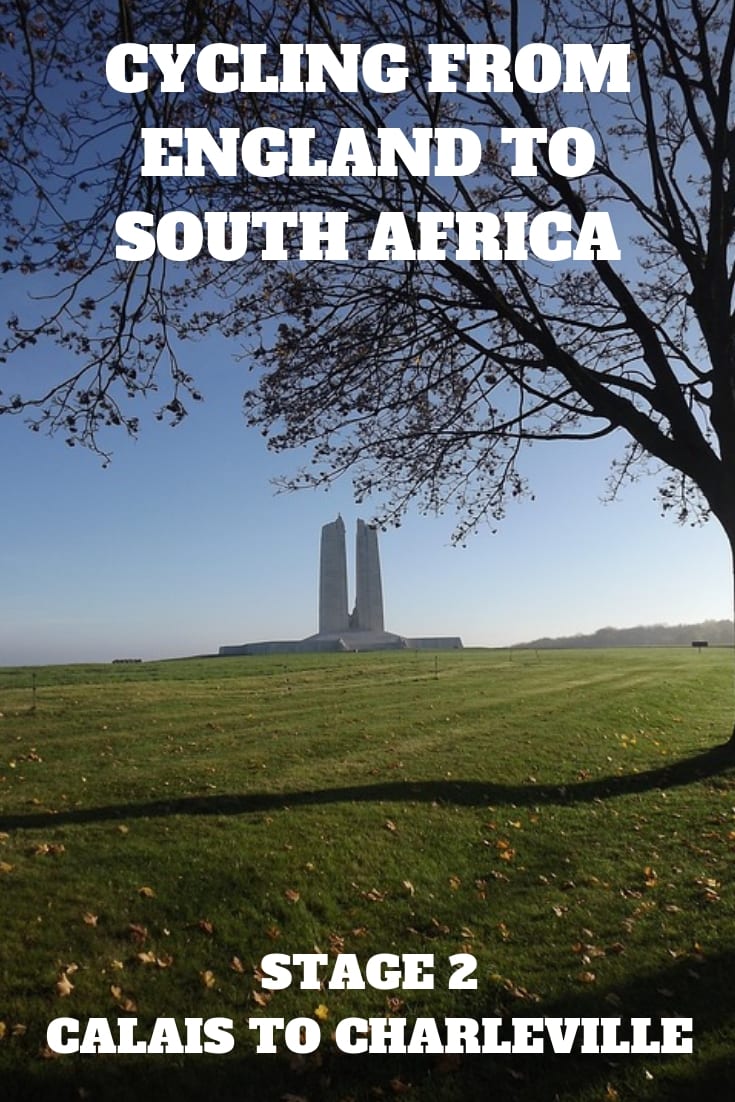