A blog post of my time cycling from Blaustein Germany to Schonau in Austria on the River Danube cycle path. Part of my bike tour from England to South Africa.

Cycling along the River Danube

This bicycle touring blog post was written in 2006, and covers part of the cycle ride through Europe from Blaustein in Germany to Schonau in Austria.

Staying at campsites, I continued following the River Danube cycle path through Germany. This trail was the longest section of specifically marked cycle path I used on my bike tour from England to Africa.

Cycling from Blaustein to Dillengen

I felt fully rested, warm and full for the first time in ages as I set out from Blaustein in the morning. The breakfast was really good, and just what I needed. The rain stayed away during the days cycling, and I even caught a glimpse of blue sky at one point!

The cycle route was easy to follow, and even though my Cicerone guide book to the Danube Cycle Way said there were some rough sections, I seemed to glide over them.

The River Danube is much wider now than when I set off, and I passed a dam at one point. I decided to stay the night in a town called Dillengen, as its campsite was right next to the cycle way.

There was a regional religious holiday, which meant that all the shops were shut and the streets deserted. A family turned up at the campsite, who are also cycling part of the Danube Way at 30kms or so a day. The kids even have their own panniers!

Cycling from Dillengen to Neuberg 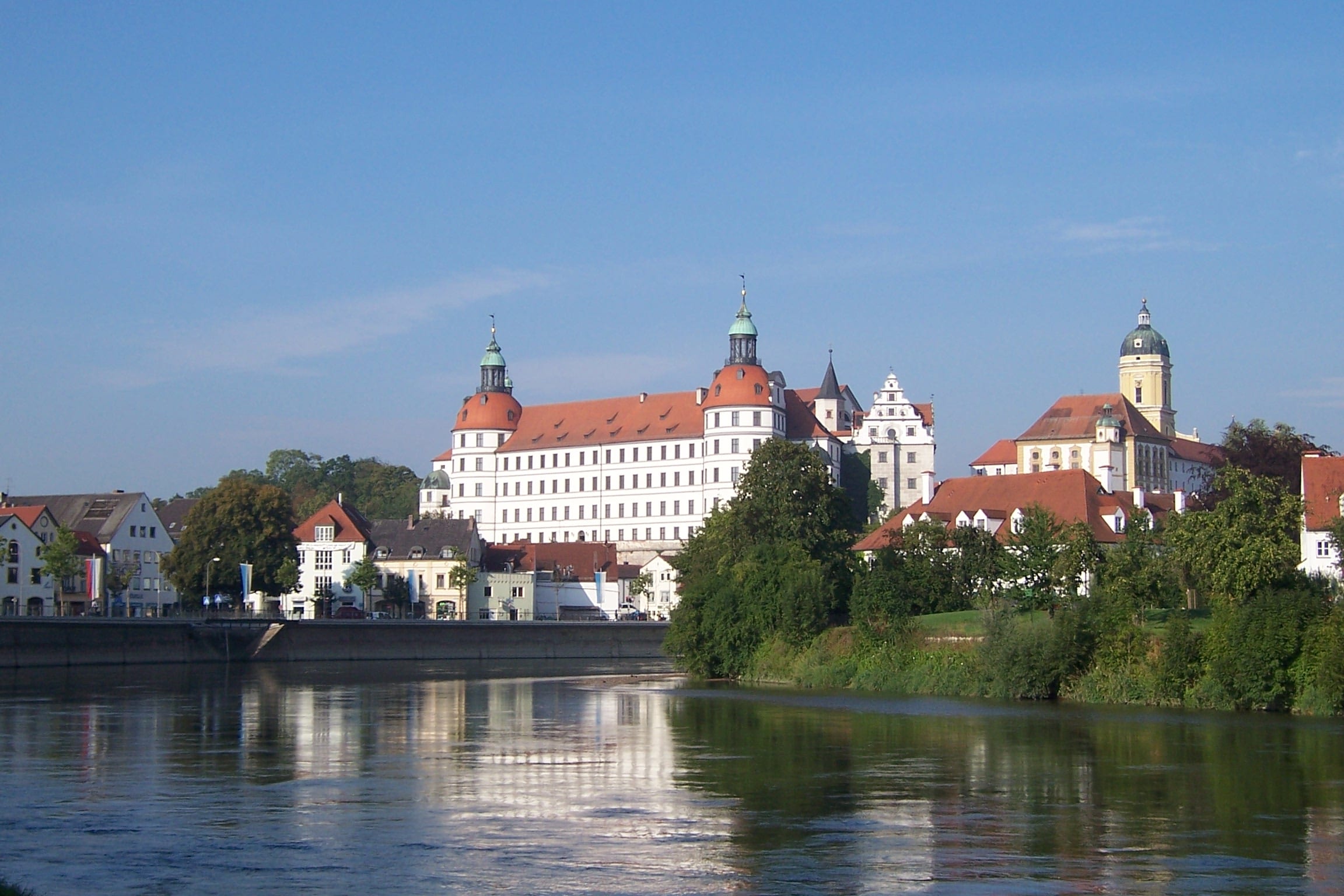 A reasonable nights sleep, and after I bought a bakers bag of misfit rolls for a Euro, I set off again.

The day's cycling was easy enough, with just a couple of steep climbs. I paced along, and even though I have overtaken other cycle tourists on my journey, I have yet to be overtaken by any. (What do you mean, it's not a competition??)

I didn't have a map for today, and was relying on the Cicerone guide book and the signposts which did me fine up to the point when they decided to part company with one another.

I decided to stick with the signposts, and ended up in the town of Neuberg, which I wasn't expecting to do, but it had a campsite, so no worries.

An error in the book?

I bought a map sometime after I had lunch, so I could work out where in Germany I was, and after comparing it with the guidebook, it appears that the guidebook's author had taken the wrong route!

Instead of the Donnau Radweg he veered off onto the Altmuhl Radweg by mistake, taking him away from the river, the nitwit! Anyway, Neuberg is a very pleasant town, with many fine old buildings.

Cycling from Neuberg to Limestherme

It wasn't a hard days ride, but my legs felt a little stiff all day, which is hardly surprising, given the distance of covered with no days off. I must be due one soon!

I didn't really know what to expect from the route, as my guide book didn't cover this section. There were a couple of tricky bits, where the cycle way seemed to disappear, but I came through all right, despite a few kms of cycling in the wrong direction!

I stayed the night in a town called Limesterme, which is just outside of Neustadt. I don't know why, but the place has a really nice, peaceful feeling to it. It's also got a washing machine, so time for my clothes to have a treat, as my cycling shorts were becoming increasingly interesting to wear!

The weather was absolutely gorgeous all day, with clear blue skies, and temperatures hitting the high twenties. It will be kind of ironic if throughout the whole trip, the hottest temperatures were in the UK at the start!

Steve rang during the night, and it was really good to talk to him… thanks mate!

Cycling from Limestherme to Regensburg

It was raining at the start of the day, but strong winds which blew in my favour also cleared the sky to make another hot and sunny day. The track was easy, apart from one section just before Kelheim, where it turned very rough as it wound its way steeply through a forest.

The descent was worth it though, because there, at the bottom, was a McDonald's, just waiting for me. I managed to squeeze in a breakfast egg and bacon McMuffin before the cut off time, which was reward in itself. Marvelous.

Onward, then, to Regensburg, cycling for the most part on gravel tracks beside the rivers edge. The campsite in Regensburg, which is a fair sized city, is just off the cycle way, and easily found. Quite pricey though at E13.50 a night. Come on guys, play the game!

After setting up, shower etc, I caught a bus into the city centre which was some distance, and there, at the bus station was another McDonalds.. Well, it was lunchtime! The only thing I would say, is stop giving me options when I order… I don't sprechen sie lingre, ok? Fueled up, I found an internet cafe, and did some updates. 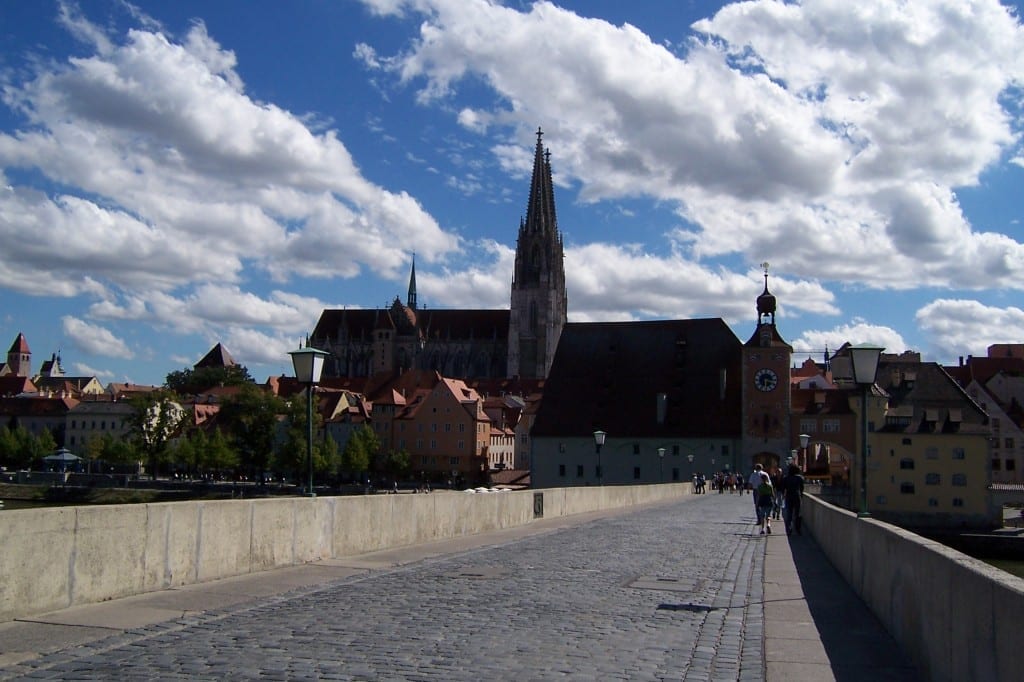 Then looked around the old centre, which has a stunning cathedral and hundreds of fine old buildings. Stocked up at Nettos, and although I considered a glorious hatrick of McDonalds, I decided on a tin of Maggi Ravioli instead.

I remember Maggi from my first trip around Australia, when Andrea and I were on an all noodle diet to save cash, and here they are again!

Cycling from Regensburg to Seebach

I got a reasonably early start, and with a clear blue sky overhead, I got underway. I passed through some quaint villages with pretty churches, and through open countryside which was a bit of a slog at times.

I easily made Strauberg, so I decided to push on to Deggendorf, all the while taking a break every 20kms which seemed to work quite well. The campsite in Deggendorf looked horrible, so I carried on, and stopped in a village called Seebach, and booked into a guest house instead.

I haven't paid for it yet, so today's expenditure is only 3 euros, which I spent on a kebab, that ever present German delicacy!

Cycling from Seebach to Schlogen 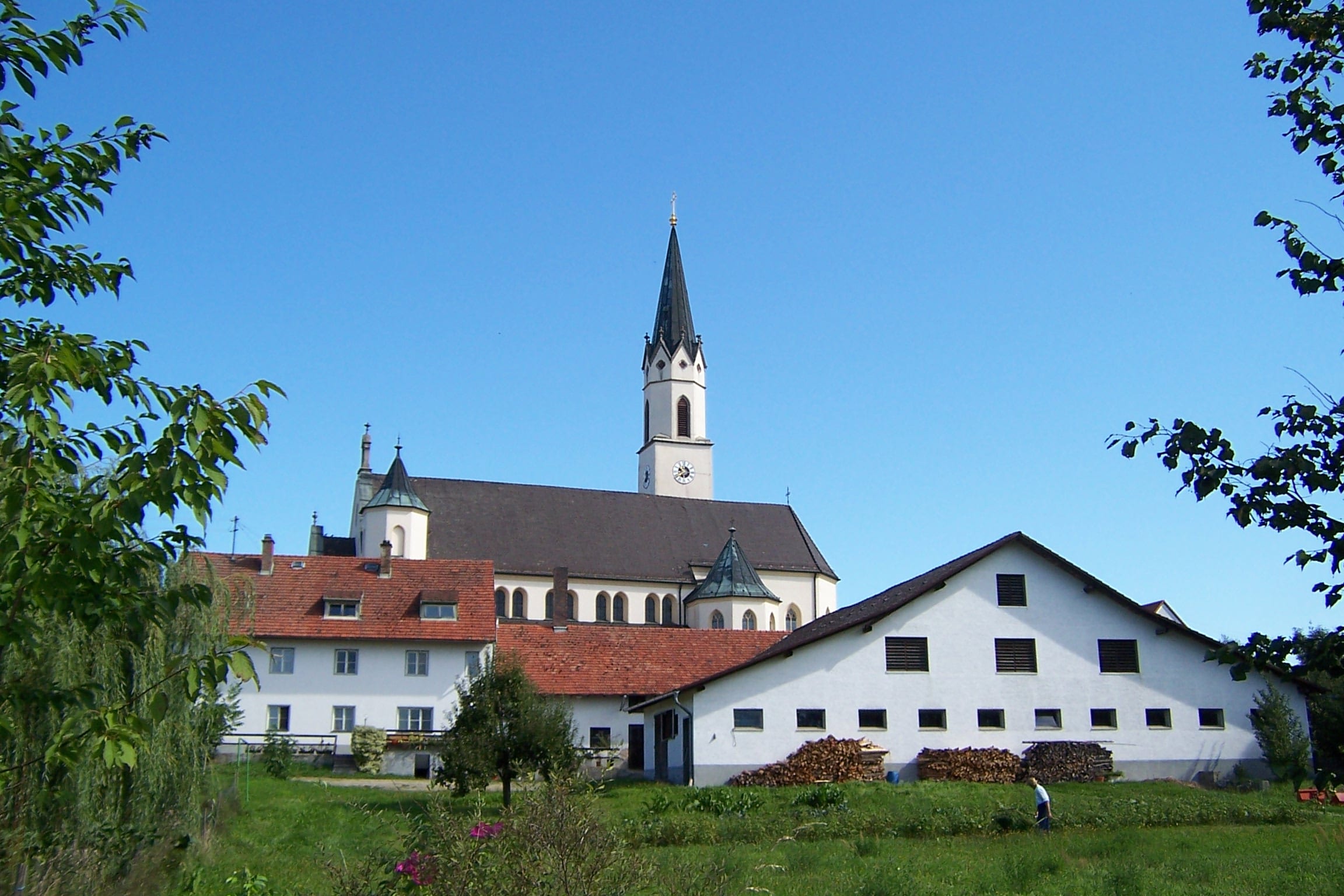 I made the breakfast at the guesthouse a good one, and also took a roll away with me for later on. I was really flying today, and didn't want to stop!

At one stage, i cycled with a group of German lads, and used them as a windshield until one of them fell off. I decided to bypass Passau, and carry on into Austria.

There was no ‘welcome to Austria sign', but here I am all the same, in my third different country so far. I carried on pacing along, and my average speed of 20kmh is my fastest so far.

The cycle path on the Austrian side is proving to be very smooth, and follows close to the River Danube's edge. Had to take a two euro ferry across to the opposite side at one point.

Cycling from Scholgen to Au

I felt quite cold during the night, and when i got up in the morning, a mist hung between the two forested banks of the Danube. it looked very picturesque, and cleared by the time I was underway for the day. Not a lot to report other than that really.

Cycling from Au to Melk

Well, i make that over 2000 kms now… wow! I must be mad. It started off raining today, but you've just got to ignore it and get going. I passed through some great scenery blah blah. Tried to use the internet but the connection was rubbish.

Cycling from Melk to Zwentendorf

The scenery between Melk and a town called Krems was absolutely outstanding today. The cycle way passed through wonderful villages, which were dotted between vinyards and fields full of trees heavy with fruit.

The Danube snaked below, and up above, there were yet more terraces of vinyards. Very special. So far, I've managed to get across Austria without a map.

Cycling from Zwentendorf to Schonau

I set off with the intention of seeing what I felt like about staying in Vienna. I reached the city in reasonable time, and after cycling around for a while, I thought sod it, and decided to carry on.

It was quite a task trying to find the cycle route out of Vienna, but i managed it eventually. There was one section which passed by an area of the Danube obviously popular with nudists. From what little I could see, not all Austrians are into big sausages. (Don't start even thinking about kebabs).

For the last ten kilometres, the wind was against me, so I decided to call it a day in Schonau, and booked into a guesthouse for the night, where I've also just had an immense mixed grill. I'll fuel up on breakfast in the morning, and head for Bratislava.

Incidentally, a personal goal was achieved when I heard a couple of German tourists say ‘Achtung' and ‘Jahvol' within half an hour of each other. Marvellous. 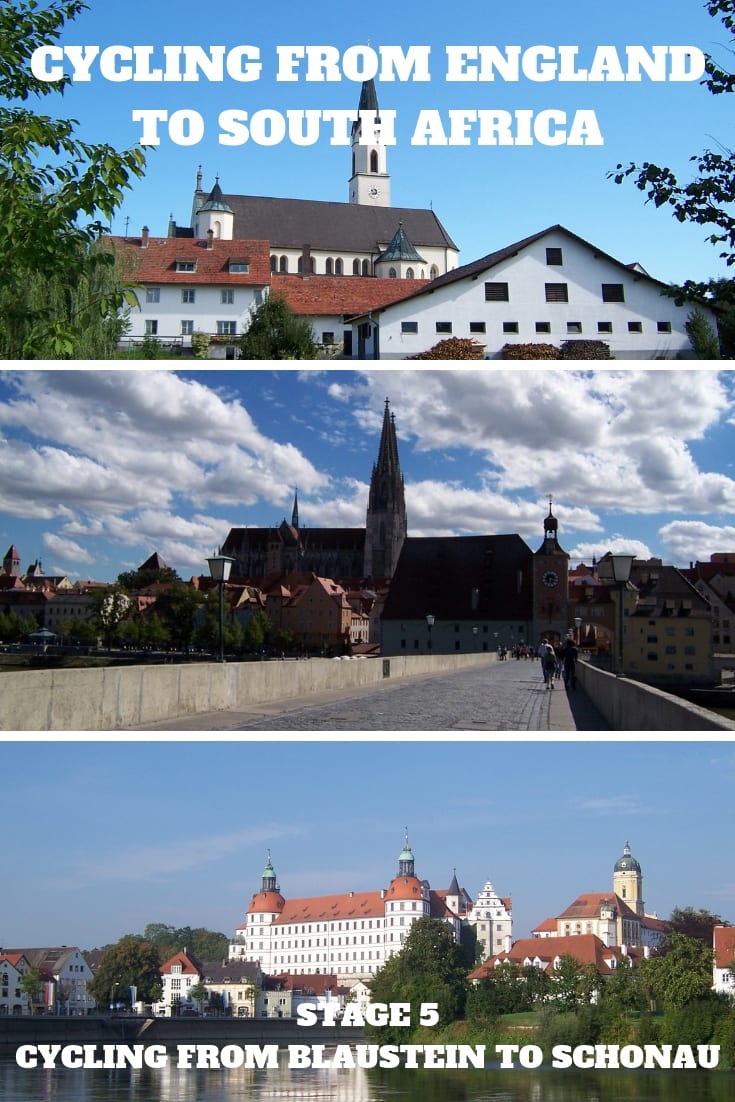