Last Updated On November 7, 2022 by Dave Briggs Leave a Comment

This is the eighth bike touring blog post from cycling England to South Africa. This travel blog update covers the section from Carta to Madara. 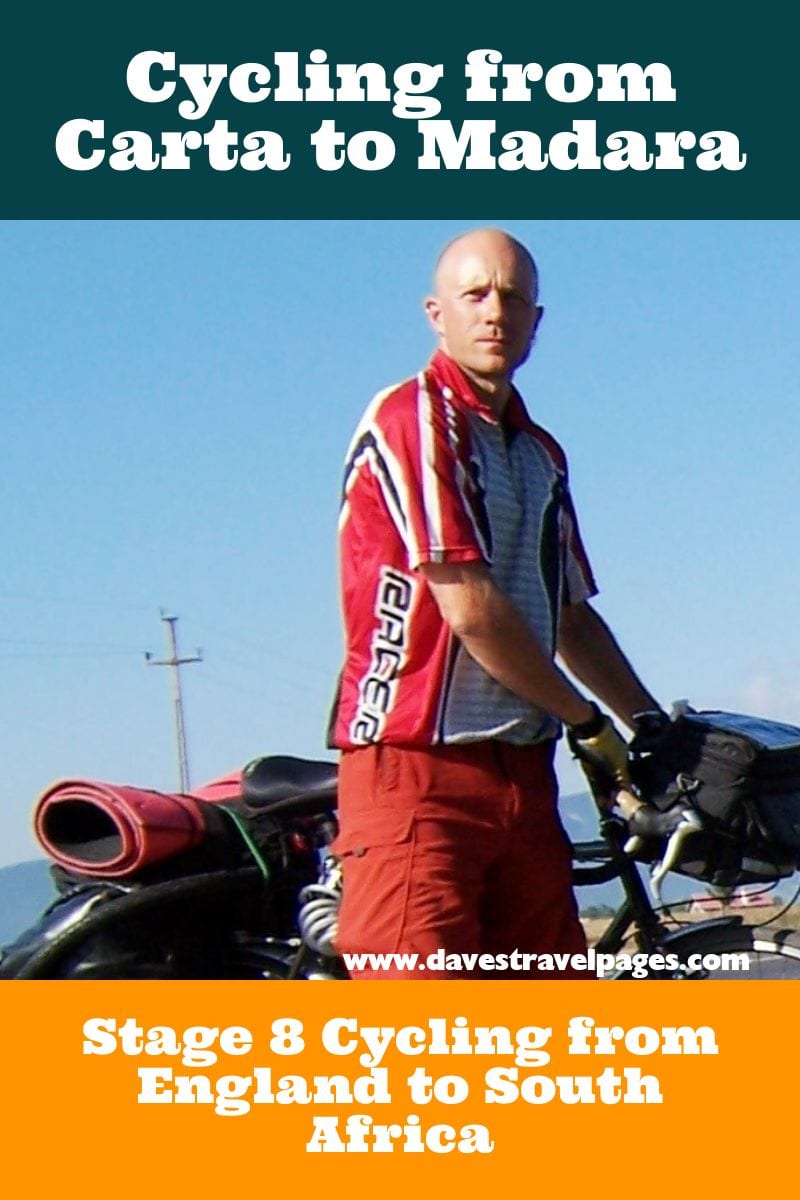 During my bike tour from England to South Africa in 2006, I kept regular travel blog posts about the different stages. These blog posts were written whilst on the road, normally with terrible internet connections. So please excuse the roughness!

Well, what a day! Its quite hard to describe the sheer pain of it all, now that the immediate memory has faded, and a good job too!

I knew from the beginning that it was going to be a hard day's cycling, as it was a very cold night, and I'm not really geared up for extremes of cold. This meant that sleep was more difficult, despite the two pairs of socks and full set of clothes I was wearing in the sleeping bag.

Also, when I woke up, I was actually in a cloud.

Breakfast wasn't much,  basically things I could pilfer from what was growing around the campsite – 1 bunch of grapes (not ready for wine making quite yet!), one mouldy apple, and six walnuts I found in a basket somewhere. (I had to crack them with my bicycle spanner).

It was hills straight from the start as I cycled off from Carta. I stopped off at a small village shop to buy some chocolate, and soon after, I left the realm of hills and entered the domain of mountains.

After that, it was basically just bloody hard work all day. I rode through to Brasov, and found a motel and after a meal, collapsed for the night!

Well, if I thought yesterday was hard, this was even harder!  Again, more climbing for the entire 80kms from Brasov to Campuling (minus the last 5kms downhill!). 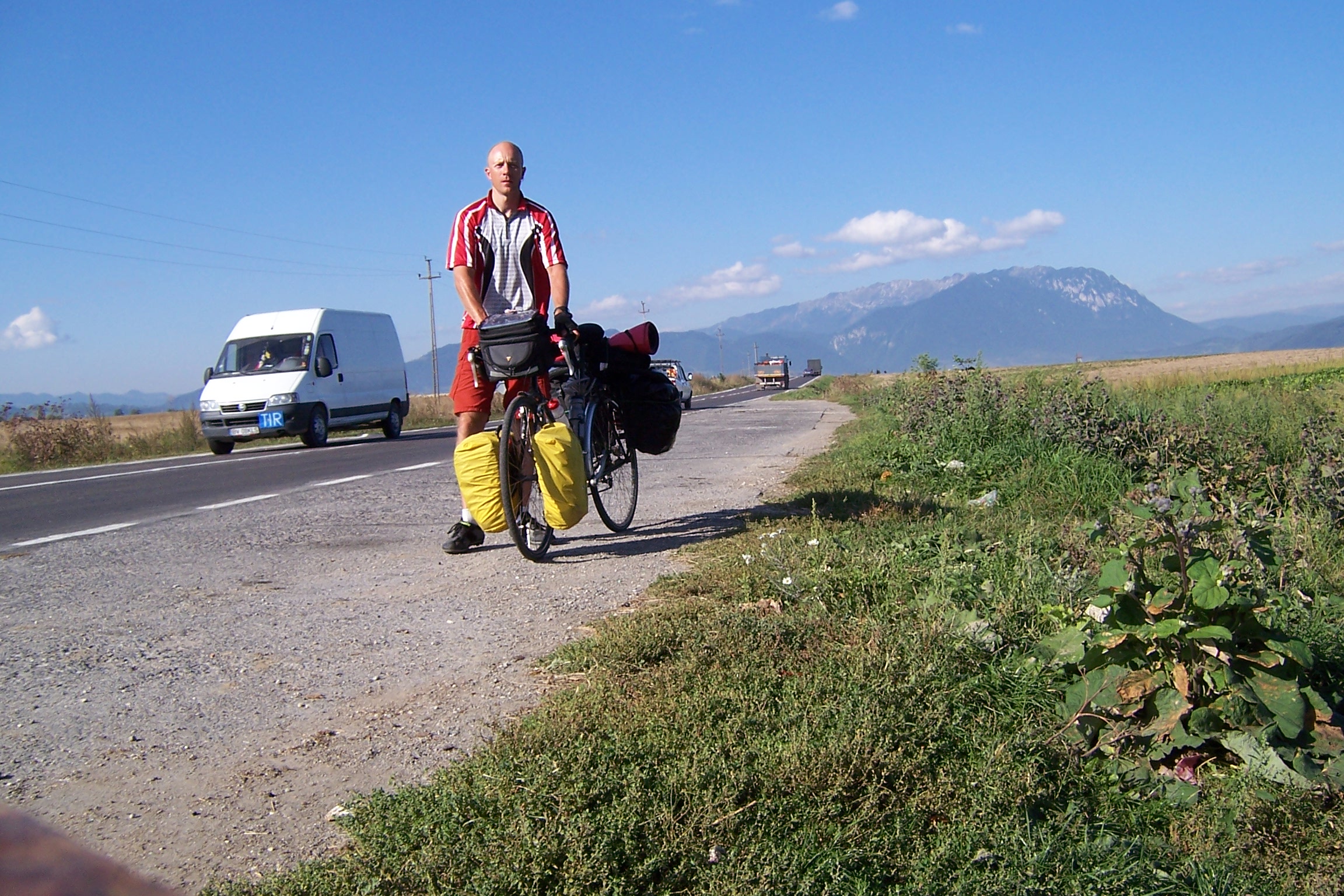 I was looking forwards to seeing Bran Castle along the way, but I have to say, I thought it was rubbish. The general views were spectacular though, and more than made up for it. However, I was very tired at the end of the day, and because it made my brain ache as much as my legs, I have nothing else to add to this travelogue.

Another hard day… this isn't what its supposed to be about!! Not so many hills this time, but the distance I covered was just stupid.. 150kms. What was i thinking!?!

The route I had chosen to take was not the best one (Campuling – Pitesti – Bucharest), and to top it, there wasn't one hotel along the way.. not one!

Its hard to describe the riding, as I decided to switch off a part of my mind and just go into automatic. Not only were there no hotels, but also, there was not where to stop.

Eventually, about thirty kms short of Bucharest, it started getting dark, and a section of woodland  started to run along the dual carriage way.

I pulled off the road, pushed the bike through the initial minefield of human excrement where countless drivers had stopped off for a poo, and then continued pushing the bike further into the wood.

I found a suitable glade, took out my sleeping bag, and went to sleep almost straight away. And they say wild camping is glamorous!

I got up early, but had to wait until it was light enough to push the bike back onto the road again. I stopped off at a garage for breakfast, then carried on cycling towards Bucharest.

As I neared the city, the traffic became heavier and heavier, and although it wasn't the most pleasant cycling I've done, I was looking forwards to a day off from cycling and to see a friend who was due to arrive around the same time.

She's been backpacking around Europe, and we decided to meet in Bucharest for a couple of days. I somehow made it to the area of the hotel, and sat down for a meal while I waited for her. She soon turned up, and then we headed off to the hotel. 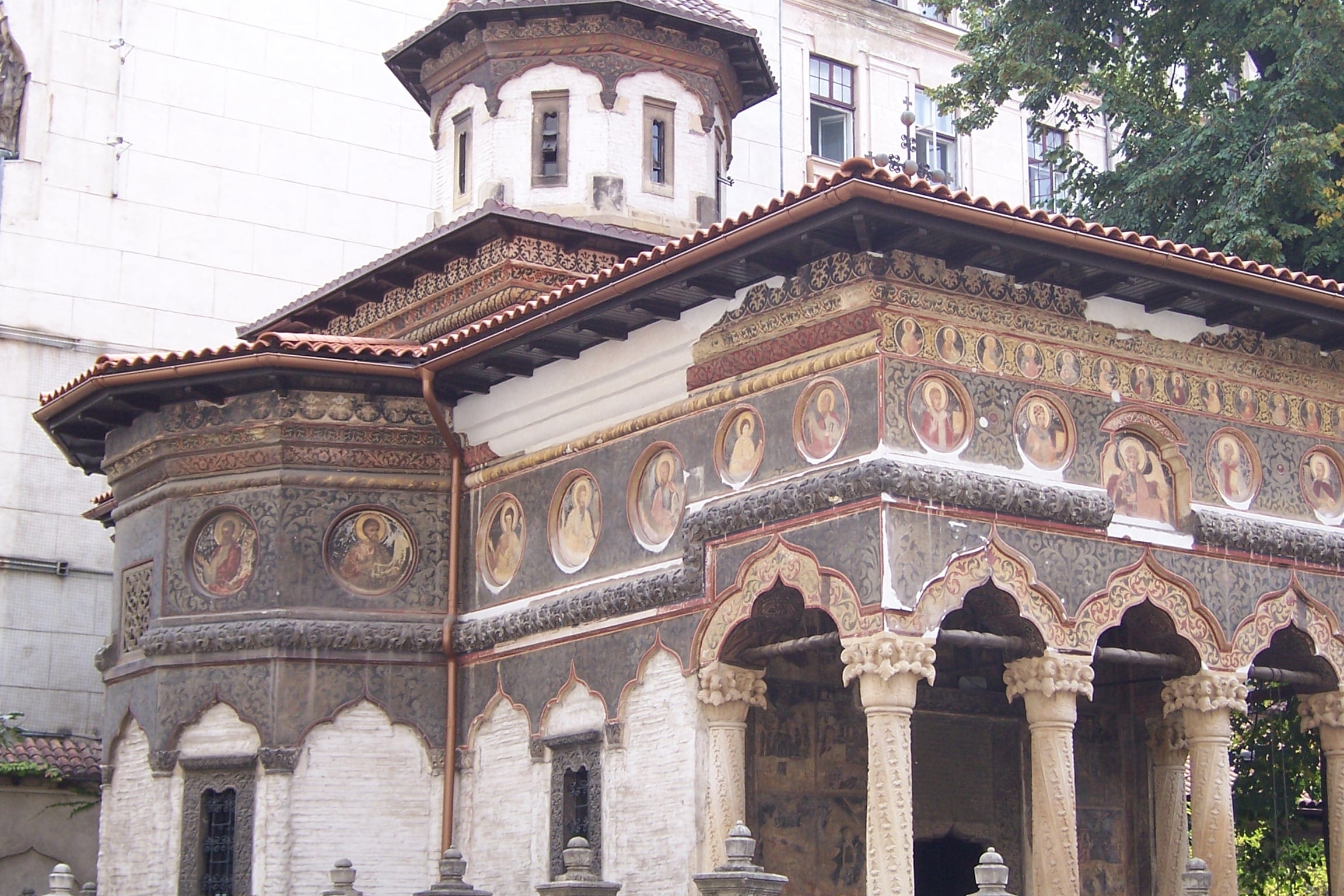 We had a wander around Bucharest during the day. I was impressed by the Parliament building, and the historic section of Bucharest was quite good, but we both came to the conclusion that Bucharest isn't all that nice. Still, we had a good time all the same.

It's been a good couple of days, but its time to get moving again. I have to meet my brother in Istanbul in 12 days, so I had better get a move on!

The exit out of Bucharest was reasonably easy, and being early on a Saturday, there wasn't much traffic on the road. The weather was quite humid and blowy at times, but the road was good quality, and the cycling was enjoyable.

The only drawback was that my cycling computer wasn't working, which was a real shame. I must look at it every 10 seconds or so to keep an eye on my speed and distance, but not today. I think one of the batteries may have worn out.

Cycling the border from Romania to Bulgaria

I reached the border with between Romania and Bulgaria for about 12.00, and there weren't a lot of people crossing over, so it was a quick exit from Romania.

To enter Bulgaria, I crossed the River Danube on the so called Friendship Bridge, and after that, it was again easy to clear passport control.

This is now my seventh foreign country of this current trip. I plan to cycle from here towards Turkey, but won't stop in Sofia along the way. If you do decide to detour there, my guide on Best things to do in Sofia in one day should be a good read.

They have a crazy alphabet thing going on over here in Bulgaria, which should make life interesting. The letters look like they are either mirror versions of ours, circles or squares. Its going to make finding my way around challenging!

I had pre-booked a hostel in Ruse, and after eventually finding the bus station, I phoned the owners and they came over in the car.

For 10 minutes I cycled after their car whilst eating an ice cream, and I found myself in a housing estate of high rise apartment blocks.

Its not actually a hostel, more like a spare flat that they rent out, but as I am the only one here, and it only cost a tenner, its game on! Just not entirely sure where I am, but no doubt I'll find the road out ok (fingers crossed).

Extremely tough cycling all day. I managed to leave Ruse without any hassle, but after that a tremendous wind picked up which seemed to blow in my face all day.

On the rare occasions it wasn't trying to force me backwards, it was because it was trying to blow me off the side of the road. Not very pleasant, and that combined with a seemingly endless series of huge rolling hills sapped my strength and spirits.

I decided to head towards a village called Svestari, where the owner of the hostel had said that there was an archaeological site.

My cycling computer still wasn't working, but judging by road signs and the maps, I covered 100kms to get there.

As I entered the village, a bunch of kids decided to follow me on their bikes towards the Thracian Tombs – there was obviously nothing on TV!

The ten leva price at the ticket office included entry and a guide who was alright but nothing special. I think her main job was to lock and unlock the doors into the tombs to prevent vandalism really.

The tombs themselves were constructed from stone, and resembled to my eye at least miniature Greek Temples. The tombs, when the bodies were interred, were then covered in earth to make a mound.

Dating from the Thracian era, the tombs had been robbed long ago, in all likeliness within years of their completion, however, after that, they had been left virtually untouched until the eighties, when archaeologists started to investigate them.

I'm not sure of the history of archaeology in Bulgaria, but it seems amazing that they weren't investigated long before.

The area surrounding the village of Svestari contains many of these Thracian Tombs, and some are said to mirror the constellations.

It was late in the day, and I had to move on which was a shame, so I cycled back into the village, and found a hotel. This is their website www.dani99.hit.bg. I really thought the room was going to be awful, but it was top quality, and all for ten quid. Lovely job! Had a stupidly cheap meal, and got some well deserved rest.

I felt nice and rested in the morning, and after an omelette and a couple of cups of coffee, I stocked up on snacks and hit the road.

The wind was nowhere near as strong as the previous day, and although the land was still hilly, it didn't seem as bad. I took some back roads of varying quality through some beautiful countryside as I cycled towards Madara, where there is another archaeological site.

Quite close to it is a motel, where I have ended up in a glorified garden shed for the night – it brings back fond memories of New Zealand!

I decided to visit to site the following day, as the weather had turned rainy and it was getting late in the day.

My surreal moment of the day, was when two shaven headed Bulgarians standing by the side of the road simultaneously gave a Nazi salute and shouted Adolf Hitler as I whizzed downhill on my bicycle.

Also, the Bulgarians nod for no and shake their heads for yes. I haven't seen this much head movement since India.