This bike touring blog covers my time spent cycling from Lilongwe to Lusaka as part of my bike tour from England to South Africa.

This bicycle touring blog post was written at the time of my tour in 2007, and then reformatted in 2020. The content remains the same.

A day off from cycling, where I updated the website, and did some shopping (There is a supermarket which actually has more in it than biscuits!)

The evening turned a bit messy, when a couple of quiet beers deteriorated into an all night session. Before I knew it, it was three in the morning, and people were stage diving off the bar.

Oddly, it wasn't backpackers partaking in the debauchery (they all went to bed early like good little boys and girls), but a bunch of Janeys, the owners, friends. They were an excellent crowd, and the whole night was pretty good.

It must be said that I wasn't exactly 100 percent this morning, although at least I still had my voice, unlike Janey! A full English helped to sort me out, and by 10.00 am, my vision was fully restored. A good night!

Received an email saying that my free visa would be waiting for me at the border.

Distance wise, it was quite a big day at around 150 kms, but the actual cycling was pretty easy. My free visa was waiting for me at the border, although I hadn't realised that it would only last for fourteen days, so I will have to pedal a bit harder through Zambia now!

Found a campsite, where Kim and her husband, who had also been staying in Lilongwe had arrived by bus before me.  The meals were horrendously expensive, so I ended up with a plate of chips, and had butties.

I got off to an early start, and made my way back onto the main road.

Other than both of my pedals falling off simultaneously, not a lot of note happened. I now have two local pedals with a six year guarantee – If they last six days I will be impressed! So, during this trip so far, I am now on my .. 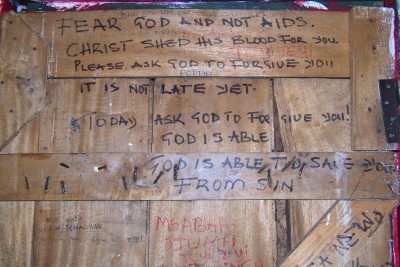 Want to avoid my mistakes? Read my guide on the best pedals for bike touring!

Not bad going !! I arrived in Katete at 12.00 and although I was tempted to carry on, I didn't, knowing that I had a couple of long days ahead.

In the evening, I had a meal and a couple of beers in a sleazy looking bar (straw roof, plastic chairs, Christmas tree, aids awareness posters, prostitutes).

I got talking to a few of the locals, which is one of the things that I enjoy most about travelling by bicycle, especially in the small towns where they rarely see tourists, much less crazy ones on bicycles.

I had chicken and nshima for dinner. Nshima is the local staple food made from maize, and looks a little like mashed potatoes and a certain ex-girlfriends initial attempts at boiled rice.

The guest house I stayed in was obviously top quality, and the graffiti on the back of the door was religious in style, basically asking God to forgive someones sins for sleeping with prostitutes. Marvelous.

Forgot to mention – I met a Japanese cyclist coming the other way who's name was Hume I think. I love meeting the Japanese, as they are always so nice!

Not a tremendous nights sleep, as not only was the room incredibly hot, but a bar somewhere down the road decided to play the same CD over and over again at Africa volume until six in the morning, which is when I get up anyway.

The cycling was straight forwards, and I reached a campground called Zulu Kraal which was a bit run down. According to the guest book, I was the only person to have stayed there in two months. An early night, as there were some big days ahead.

I got off to a nice early start, and raced through to the town of Nyimba in three hours. After that, things got a bit tougher when a hilly section started. Either go up or go down, but what's with the whole up down, up down thing??

I eventually made it through to Luangwa Bridge (which was not exactly Sydney Harbour Bridge!), and with over 160 kms in the bag, made my way down  to the campsite.

It was run by a South African alcoholic who sounded monumentally drunk, possibly due to the bottle of whiskey I saw him drink within four hours, and his chain smoking English wife.

It was outrageously expensive to eat, at over ten pounds for a three course meal, but I was famished, and had no choice. It was really nice though, which made up for the price!

Although my wallet was a little lighter when I left Bridge Camp, it didn't seem to make a positive difference to my progress back out on the hills.

There was lots of climbing which was pretty tough in places, but nothing that I hadn't seen before. I reached Rafunsa for just gone 12.00, and although I considered carrying on, I decided to stay the night instead.

Rafunsa was little more than a collection of wonky looking shops and stalls clustered on the road, and had one guest house. I did some competition winning eating and drinking and generally relaxed, knowing that tomorrow would be a pretty big one.

Today was a massive day at over 170 kms and over tough, if a little boring to look at, terrain. I found my way to Chachacha backpackers sometime after three, where I pitched my tent.

Ross and Christine the Aussie cyclists were also there, and we chatted for a while about the journey from Lilongwe and our experiences on the road.

Christine has come down with malaria, which isn't good news, but at least she is not suffering as badly as some people I have met, and she has seen a doctor in time and has been given a course of treatment.

A day off, and much needed as the backs of my legs are aching something chronic! I walked over to the shopping mall, which had shops which have actually got stuff in them. Result!

One of them was called Game, which sold everything from nipple cream to wrenches and spanners – essential stuff.

Loaded up on supplies in Shoprite and took some money out which I hope will last me until Botswana. A slight monetary crisis is looming, which I hope will be alleviated by a large sub being placed in my bank account soon – Please, pretty please!

Lunch was pasta and my random purchase of hot chilli pilchards – You know it sounds yum! I'm hoping for an early night and an early start tomorrow so that I can be on course to reach Livingstone in four days.