Last Updated On January 10, 2022 by Dave Briggs Leave a Comment 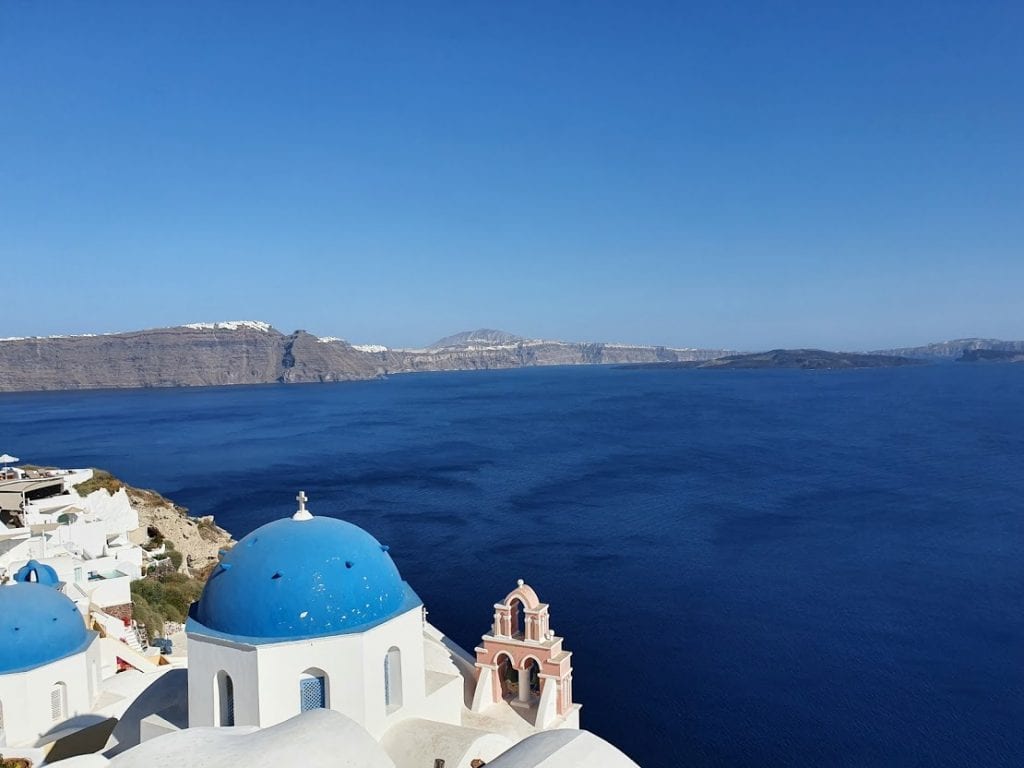 What country is Santorini in?

Despite its vaguely Italian sounding name, Santorini is in fact one of the Greek islands. Santorini is perhaps the most well-known of the Cyclades chain of islands located in the Aegean Sea.

World-famous for its stunning views, sunsets and beautiful towns, the whitewashed buildings and blue domed churches are a stand out feature of Santorini island. These colours are also present in the Greek flag.

So, if you were ever wondering if Santorini is in Greece, the answer is a firm yes!

The Greek island of Santorini is located in the Aegean Sea, approximately 200 km southeast of Athens, 150 km south of Mykonos, and 140 km north of Crete.

If for some reason you wanted the GPS coordinates, you will find that these GPS coordinates for Santorini are pretty slap bang in the middle of the island: 36.3932° N, 25.4615° E.

Below, you can see the location of Santorini Greece on a map. 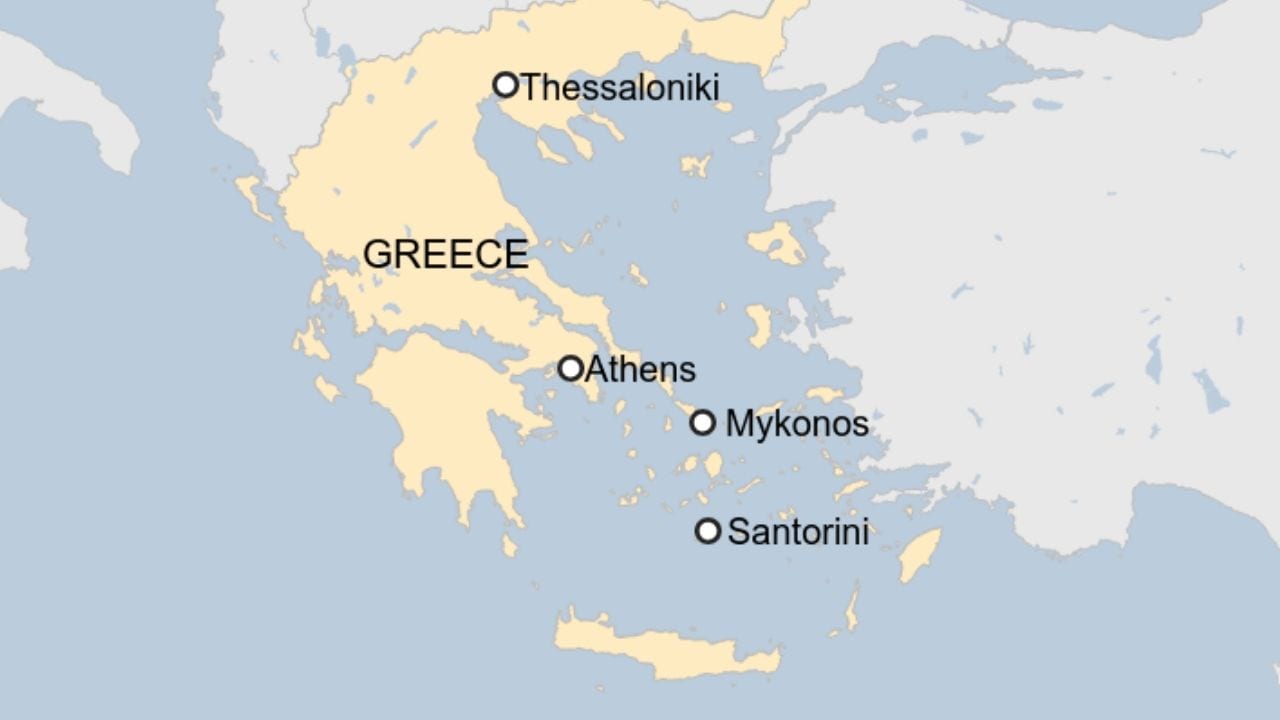 How big is Santorini Island?

The island of Santorini Greece is 76.19 km². The maximum length of Santorini is 18 km, and and it's maximum width is 5 kms. The highest point of the island is Mount Profitis Ilias at  567 metres (1860.2 feet) above sea level. You can also find the monastery of Profitis Ilias (Prophet Elijah) here. 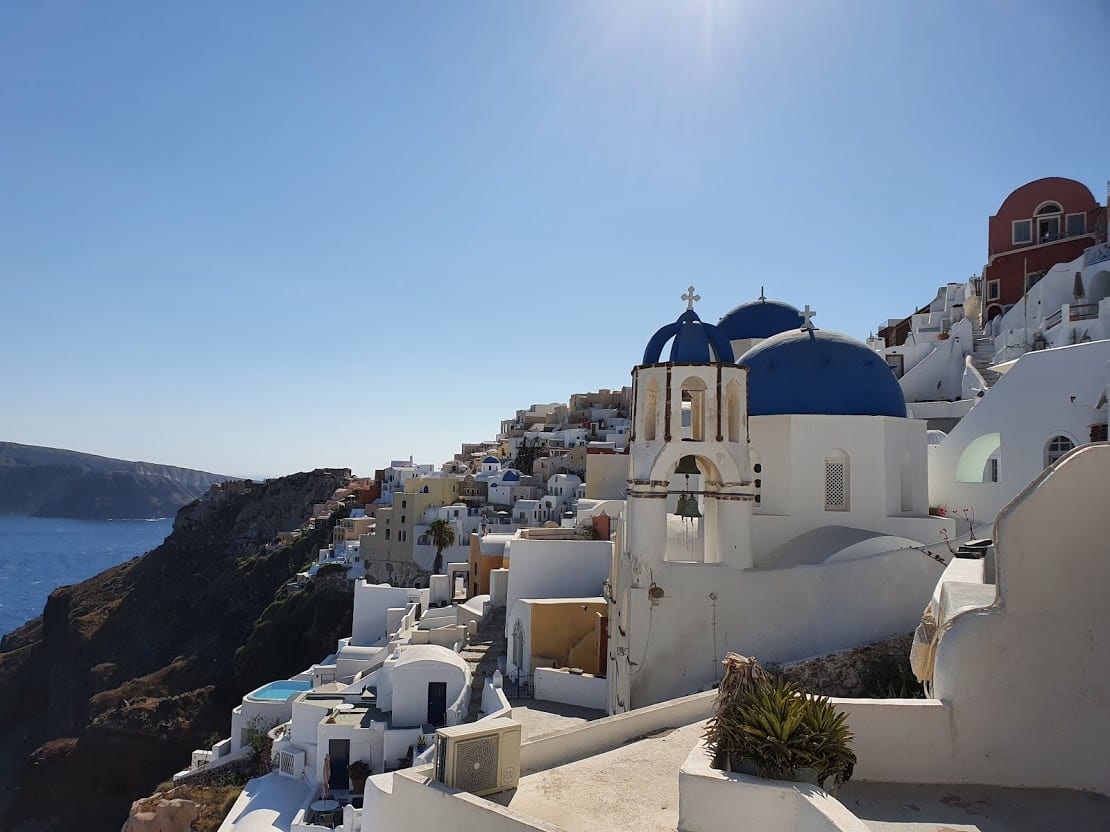 There are 15 towns and villages on Santorini, with the most famous being Oia and Fira. There is a nice trail you can follow if you'd like to walk from Fira to Oia which takes 3-4 hours.

How many people live in Santorini Greece?

The Santorini population is 15,550 according to the 2011 census. This local population increases during the summer months when the tourist season gets into full swing.

Exact figures are always hard to find, but in 2018 it was estimated over 2,000,000 people visited the tiny island of Santorini! 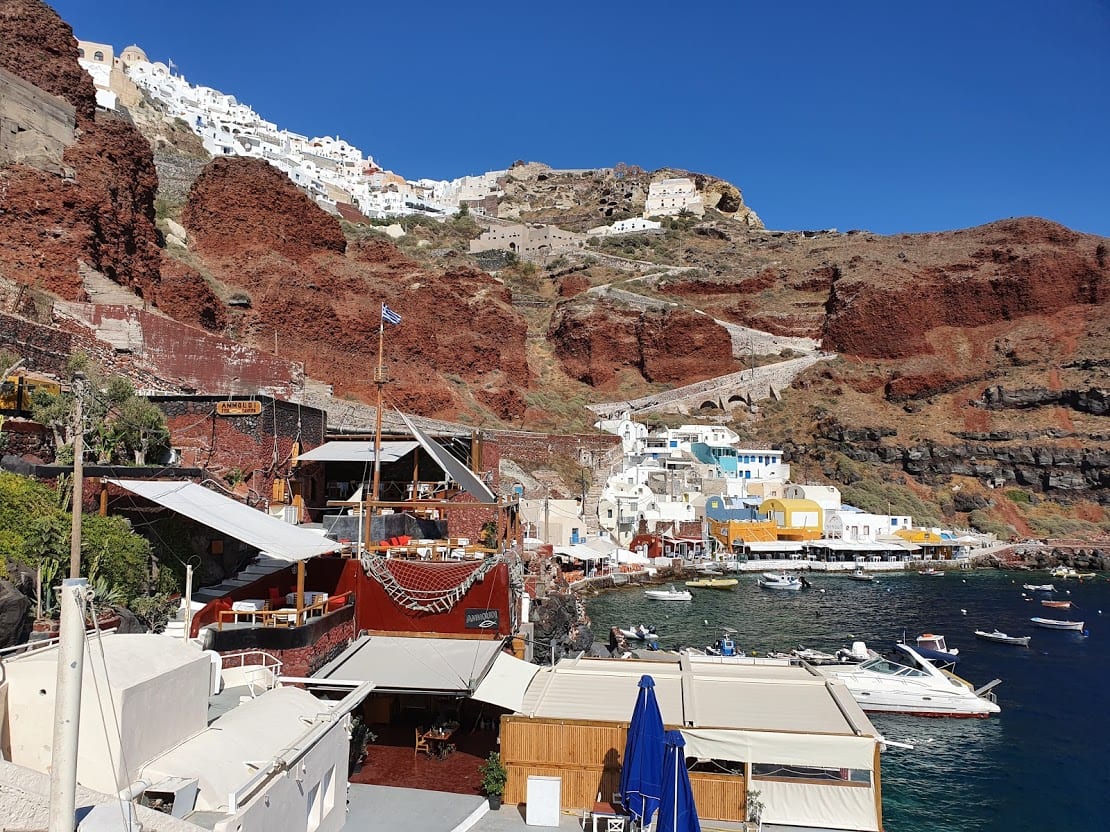 Why does Santorini sound Italian?

The name Santorini has its origins in the thirteenth century. It is a reference to Saint Irene, the name of the old cathedral in the village of Perissa founded by the Crusaders often described as Franks, but probably Venetians.

This is why the name Santorini sounds Italian, and why some people think Santorini might be an Italian island.

What is Santorini best known for?

Santorini is perhaps the most instantly recognizable Greek island thanks to its whitewashed buildings, blue domed churches, narrow streets, caldera views, and its amazing sunsets.

How to get to Santorini?

The island of Santorini has an airport which accepts both international and domestic flights. In addition, there is a ferry port which connects Santorini to the other islands in the Cyclades and other parts of Greece. Cruise boats dock at another port in Santorini. 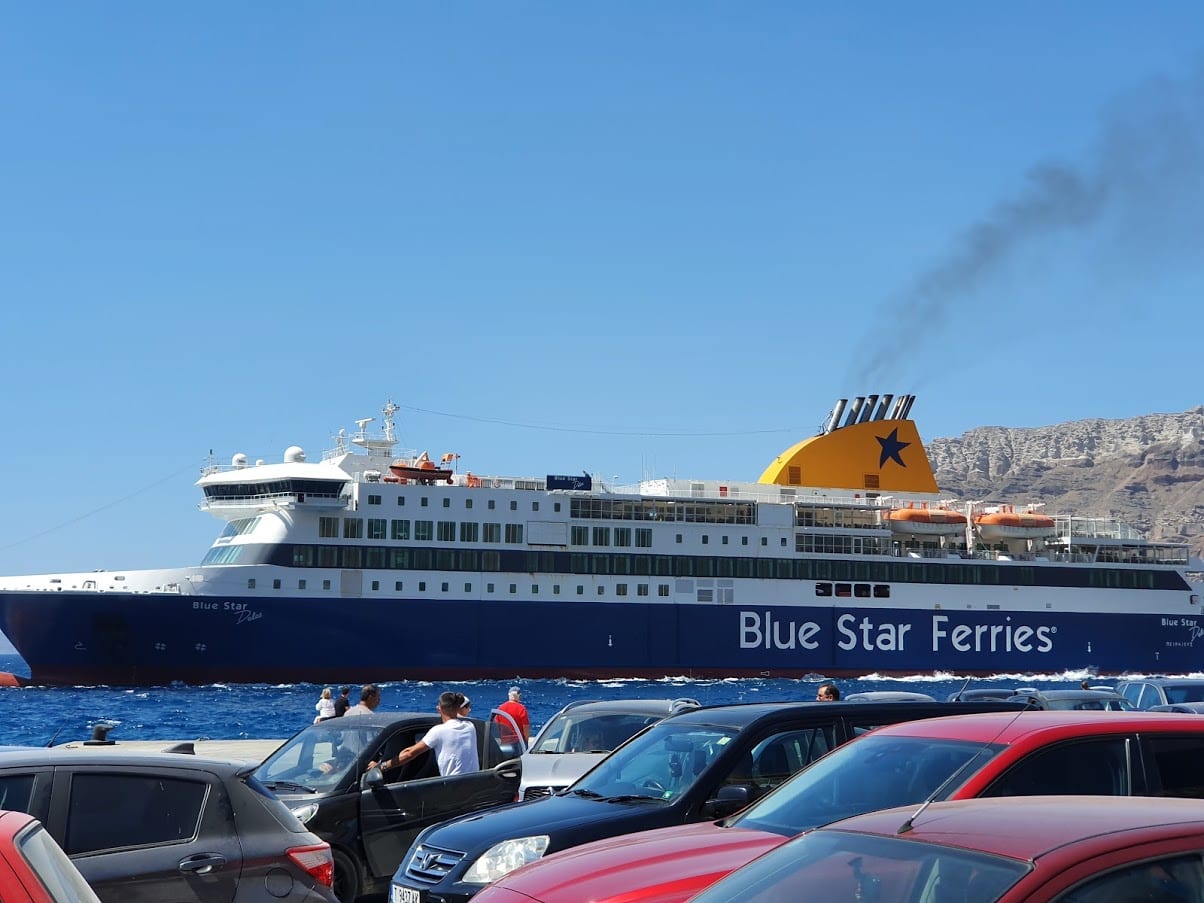 Can you get to Santorini from Italy?

During the summer months, there will be some direct flights to Santorini from Italian cities such as Rome, Venice or Milan. There are no direct ferries from Italy to Santorini, although some cruise ships may include both Santorini and Italian destinations on their travel itinerary.

How far is Santorini from Italy?

The total driving distance from Santorini to Rome in Italy is 994 miles or 1 600 kilometers, and involves at least two ferry crossings. It would take an estimated 28 hours to drive from Italy to Santorini or vice versa.

It's very easy to travel to other islands after Santorini, especially in the Cyclades chain. One popular option is to take a ferry from Santorini to Mykonos of course, but there are many other islands to choose from.

Of all the Cycladic islands, Santorini island in the Southern Aegean Sea is found most to the south. While you can pretty much get to all the Cyclades islands from Santorini, some are closer than others.

The nearest islands to Santorini are Anafi, Ios, Sikinos, Folegandros and of course Thirassia.

If you're thinking of planning a vacation in Santorini, you may find these travel guides useful:

Please feel free to share this travel blog on Santorini. You'll find sharing buttons in the bottom right hand corner of the screen. 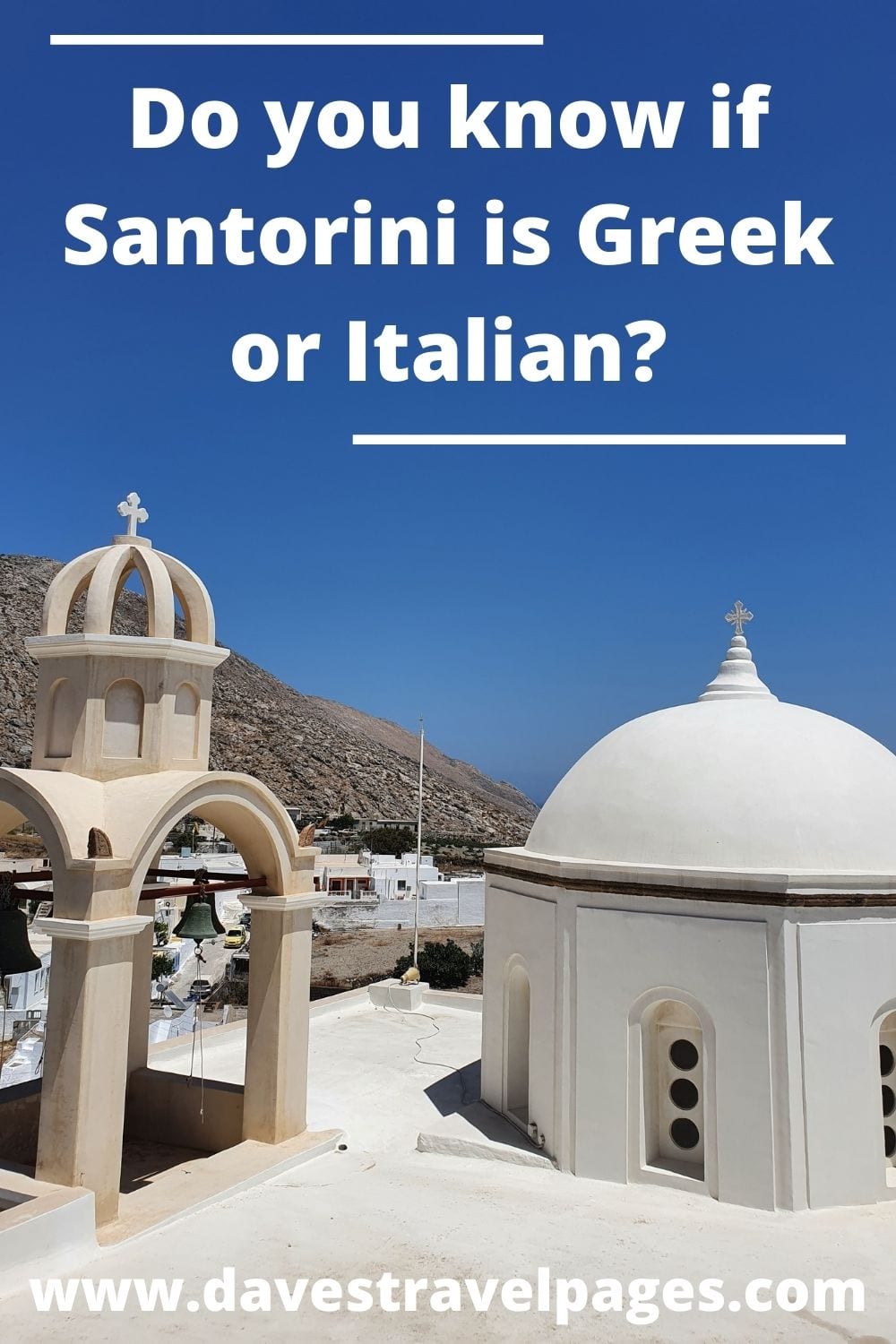 – Dave Briggs
Dave is a travel writer living in Greece and originally from the UK. He started this travel blog in 2005, and over the years it has developed into an invaluable source of travel information about Greece and the Greek islands. He has a somewhat ambitious (perhaps impossible) goal of visiting every Greek island and writing about it.
Follow Dave on social media for travel inspiration from Greece and beyond: Facebook, Twitter, Pinterest, Instagram, YouTube.