On hearing that the the Womens Tour of Britain would pass through Northampton, I had to do a double take at first. The Womens Tour of Britain coming to Northampton? Northampton is hardly the cycling capital of the UK, is it now? But, the more I cycled around the region, the more I came to realise that it really was an inspired choice. There is some beautiful countryside in the county, as well as stately homes and quiet villages with lovely winding narrow lanes. 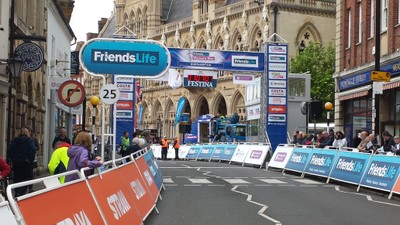 Stage one of this inaugural Womens Tour of Britain started off in Oundle and finished in Northampton town centre. The route covered just over 58 miles, and wasn't as flat as it seemed. I know from experience just how tough some of the sections were, having ridden parts of it on my way back from my bicycle tour of the Fens region a few days before. I may have done it a touch slower though, being weighed down with 22kgs of gear on a bike that weighed 18kg!

Anyhow, good excuse to take the day off work, and see the Womens Tour ride into my home town! Watching road cycling is a strange thing as a spectator though, because obviously, you can not see everything. I had a couple of choices. One was to cycle out to a quieter part of the route and see them ride by. The other, was to head into Northampton and get as close to the finish line as I could. I went for the latter idea, as there would be perhaps more atmosphere to soak up.

I picked out my spot nice and early, but rather than stand there for a couple of hours, thought it prudent to get a big brekky and a pint! Come 13.00 though, I was back in my spot and waiting for the cyclists to arrive.

The event was really well organised, and all very impressive. The crowds started to build up, and it was nice to see a good mix of cycling enthusiasts, general sports fans, and curious passers by in general. I personally think this is a great moment in not only women's cycling, but women's sport as a whole. We all know that the elite female cyclists have long been role models to other cyclists, but the sport is gaining such momentum, that some of the top stars are on the verge of becoming role models to the entire British public. Having talented, successful female role models that both women and men can look up to and admire, is something that we badly need more of in society. Events like this are therefore historic not only because they are the first of their kind, but also for what they will hopefully achieve beyond the sport itself. Anyway, enough of my waffling.

Lots of waiting, lots of waiting, and then… They whizz past in the blink of an eye! Still, I did manage to take that photo, which I am quite happy with! Massive congratulations to Emma Johansson for winning this first ever Womens Tour of Britain stage!

All in all a lovely day out, and the perfect end to my three week holiday, which has seen me cycle around the Fens, and be present at the Women's Tour of Britain in Northampton. Back to the reality of work for me tomorrow, but here are the results of today's inaugural Womens Tour of Britain Stage 1.