So you want to take an autumn holiday, and want to find out which is the best Greek island in October. I've got five awesome choices of Greek islands to visit in October for you below. 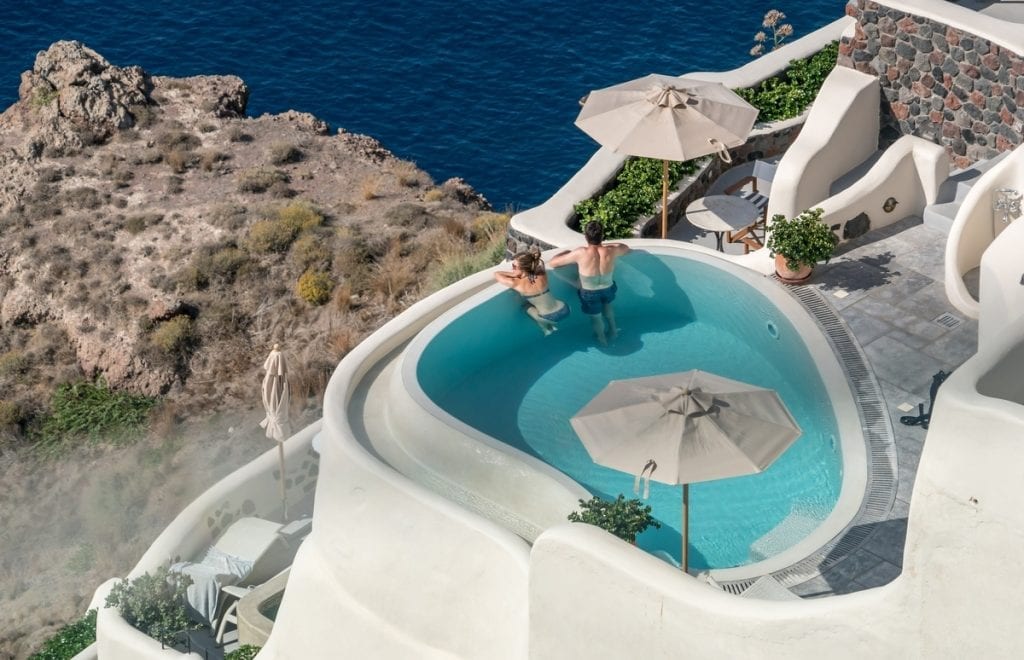 While the majority of tourists visit Greece in the summer, in recent years there is a trend for people to visit during the shoulder seasons, spring and autumn.

October, in particular, seems to be a popular month for people to visit Greece, as the weather is much warmer than most other places in Europe, and as such it can be a good off-season break.

Many people choose to just take a quick city break in Athens, while others have more time to spend in Greece in October, and try to include one of the islands in their itinerary.

In this article, we are providing some information about the best Greek island in October.

Weather in Greece in October

The weather in Greece in October can be quite variable. There will generally be some sunny days, but there will also be some rainy days. Temperatures start to drop, and you will probably need a jacket on most evenings, unless you come from countries with really cold weather.

If your main aim when visiting Greece is to stay on the beach and go swimming, September is overall a better option, as the days are still fairly long and sea temperature is relatively high. 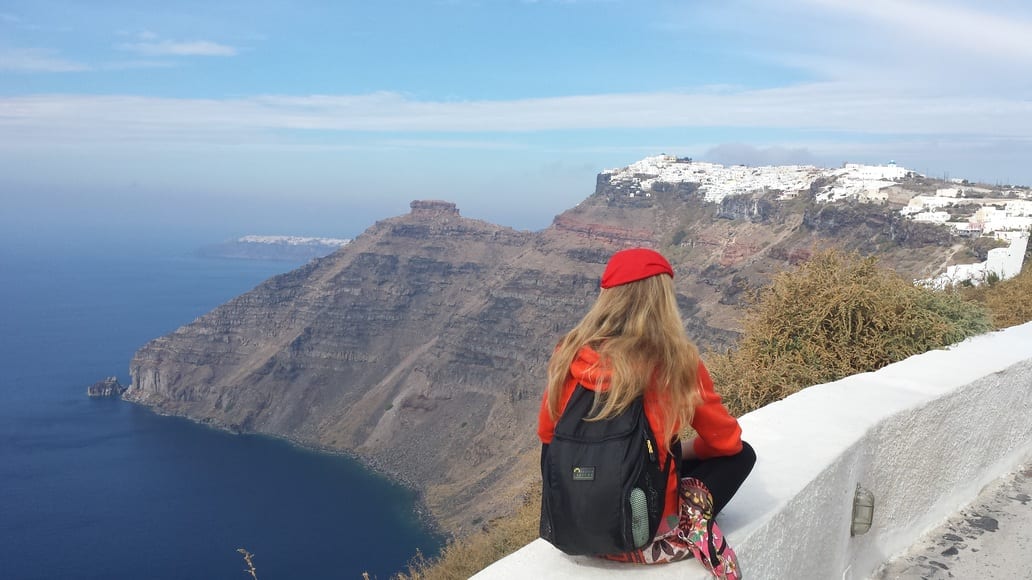 Check out my full guide: Weather in Greece in October

Travelling in Greece in October

If you are planning to visit some of the Greek islands in October, check Ferryhopper for updated ferry schedules. You can also reach most of the islands by a short flight from Athens airport, as well as some European airports.

Below are some of the best Greek islands to visit in October. 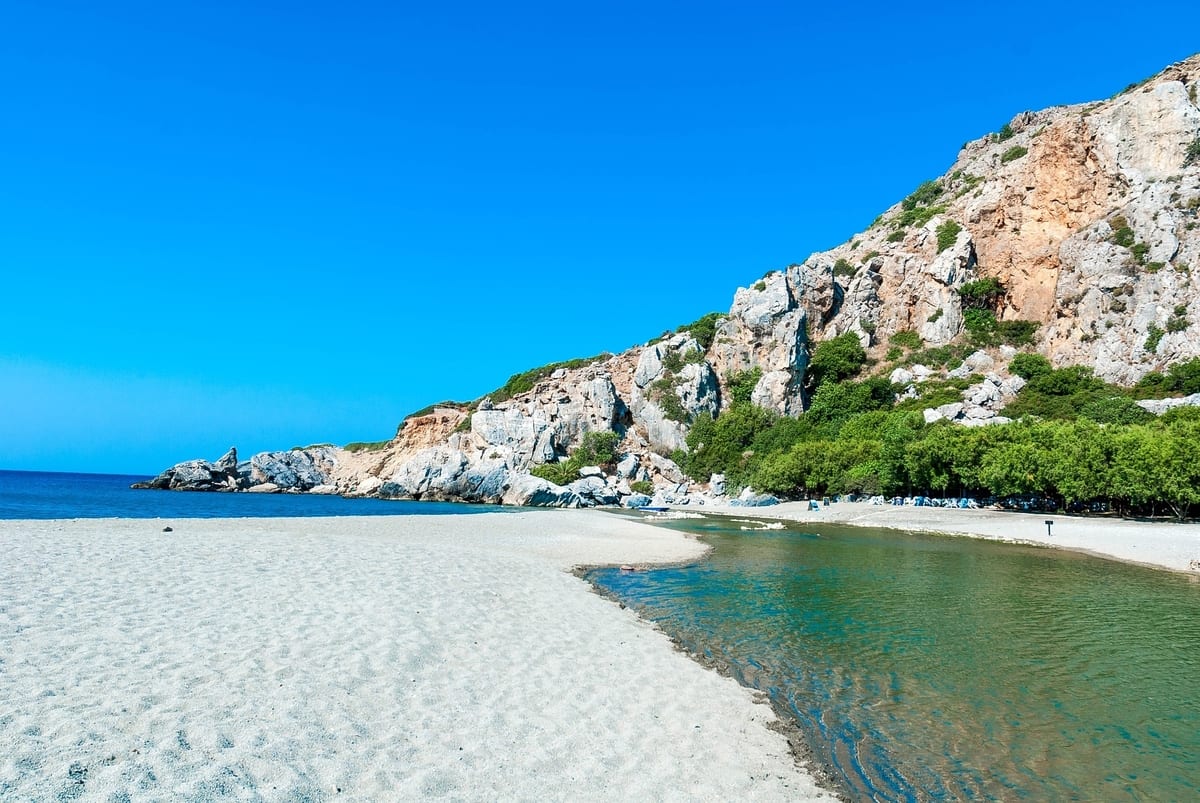 If we could only visit one Greek island in October, and had enough time to explore, it would be Crete.

With some of the mildest temperatures, some of the most diverse landscapes and some of the best food in Greece, Crete is an ideal destination all year round.

It's often thought of as the warmest Greek island in October, and there's plenty to see and do. The sea water is also still warm enough for swimming, making it a good choice of destination for autumn sun holidays.

Check out this extensive article: Visiting Crete in October

There are regular ferries from Athens to Chania and other destinations in Crete, but you can also consider a short flight from Athens airport. There are also direct flights to Chania or Heraklion from several European cities.

Related posts: Top things to do in Heraklion, Best time to visit Crete, and my Crete Travel Blog. 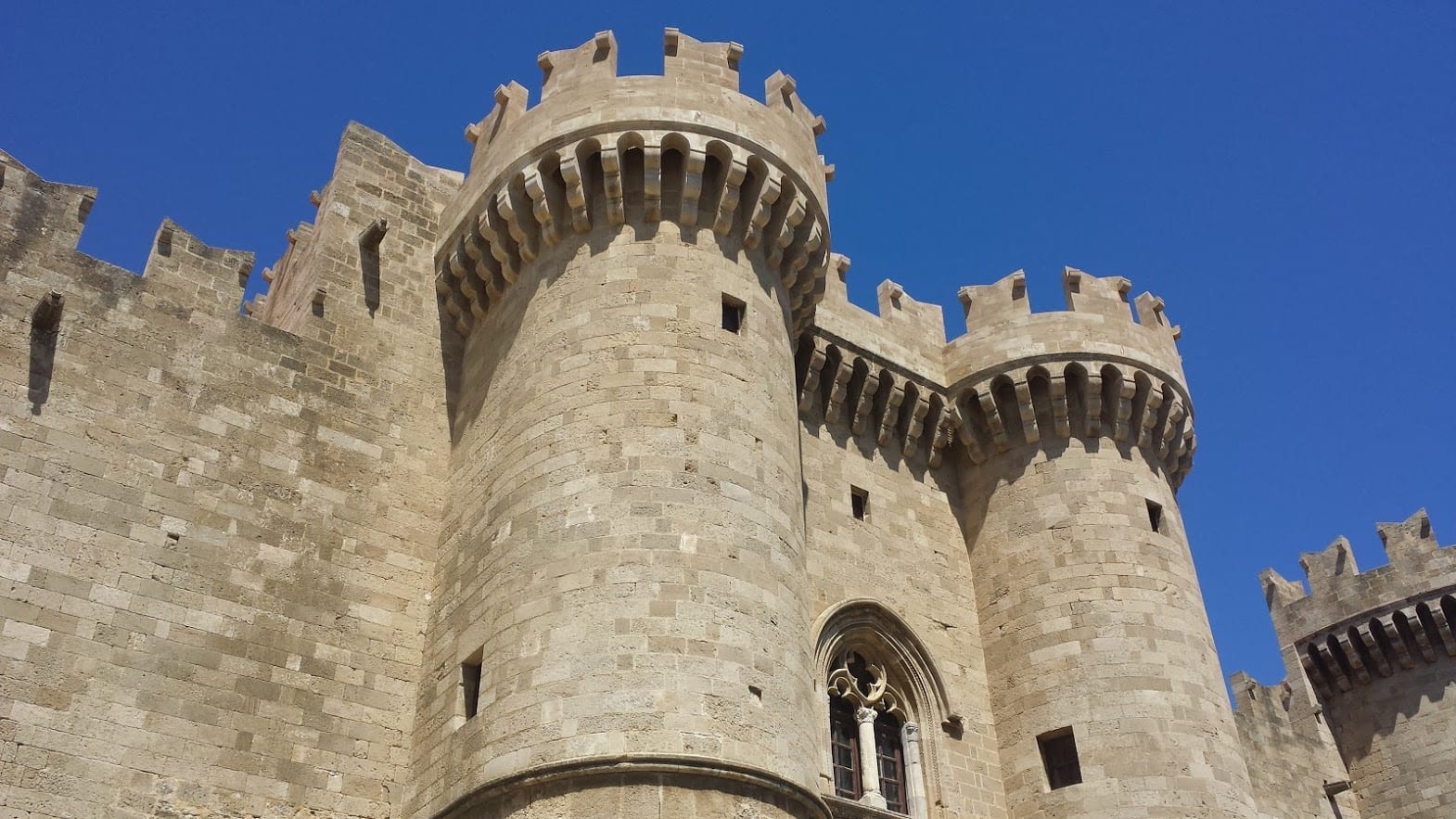 For anyone who wants to have a beach holiday in Greece, but doesn’t have enough time to explore Crete, Rhodes is the other best Greek island to visit in October.

With mild weather, an amazing medieval town, the stunning Lindos castle, and a bunch of beautiful beaches, Rhodes is a fantastic place to visit in October.

It’s best to arrange your accommodation in Rhodes town, as there is a lot to see there. You can easily spend two days just walking around the town, and visiting the superb museums.

Tip – on some days, you can walk on the Walls of the city as well.

When it comes to beaches, Rhodes has plenty to offer, and it’s best to rent a car if you want to explore them. From the famous Anthony Quinn beach, which is a paradise for snorkelers, to the faraway Prasonissi beach on the south, ideal for windsurfers and freecampers, you will definitely love the beaches in Rhodes. Combine one of your beach-hopping days with a visit at Lindos Castle.

If you prefer not to drive yourself, you can take a guided bus tour of the island. There are many different ones available, some of which including Lindos. If you want to get off the beaten track, this is one of the best options: Rhodes Safari Tour.

Finally, you can also consider a day trip from Rhodes to Marmaris, in Turkey!

As ferries from Pireaus to Rhodes take at least 13 hours, the best way to get from Athens to Rhodes is by a short flight. There are several direct flights from European cities to Rhodes as well. 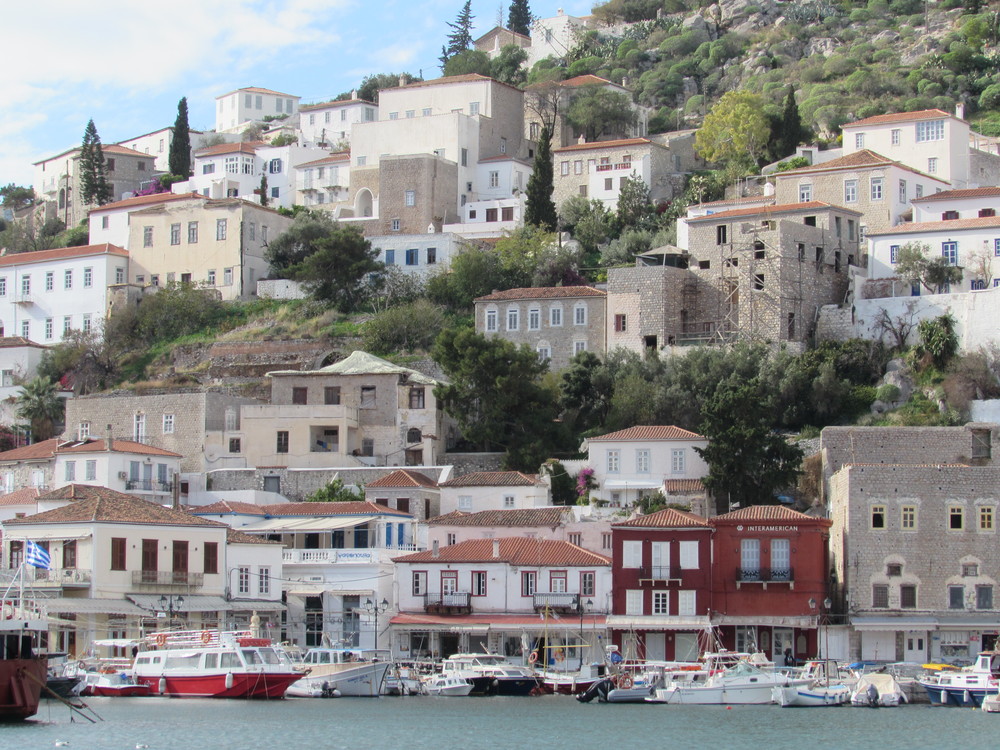 The cosmopolitan island of Hydra is popular among locals as well as tourists. Hydra’s role during the Revolution against the Ottoman Empire in 1821 was very important, something that locals take considerable pride in.

A small island closed to traffic, Hydra keeps an authentic charm in terms of architecture, with many 18th-19th century mansions built in unique style.

At the same time, Hydra has a network of trails that expand to over 80kms all around the island, and as such is an ideal hiking destination close to Athens. Apart from the beautiful nature, you will also see many monasteries around Hydra.

The island also has its fair share of nice beaches, some very close to the main town, and some others a long hike or a short boat ride away.

The island can be visited either on a day trip from Athens to Hydra, or for multiple days. Sea dolphins and ferries depart from Pireaus to Hydra port several times a day, taking anywhere from one to 3,5 hours to get to Hydra.

Note that if you are going to Hydra in late October, especially around St Dimitrios day (26 October) or the “Ohi” day (28 October), it’s best to reserve your accommodation and tickets in advance.

There are festivals and special events on the island, so it’s a popular time to visit among Greeks. You might also see the “Hydra” sailing race, taking place around the 28 October. 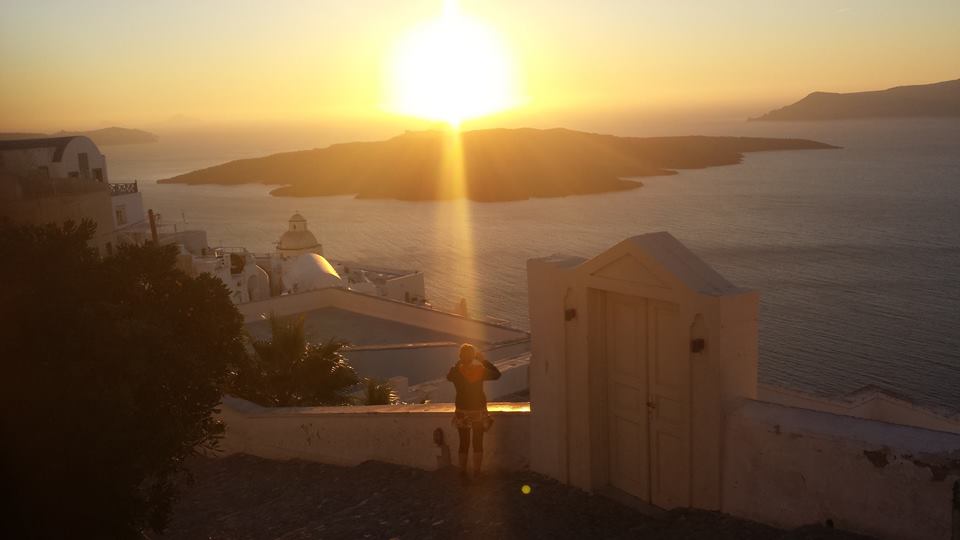 In our opinion, October is one of the best months to visit Santorini.

Even though cruise boats still visit the island on pretty much a daily basis, the island is considerably less crowded than in summer. As a result, accommodation prices are lower. Most restaurants, cafés and bars are open, and the island is still lively, but not overly busy.

Swimming-wise, given that Santorini is not as south as Crete and Rhodes, the water might be a little cold, but most people should be fine to swim on a sunny day.

While on the island, it’s worth taking one of the popular day tours in Santorini, especially the volcano tour, or perhaps a wine tour of Santorini. 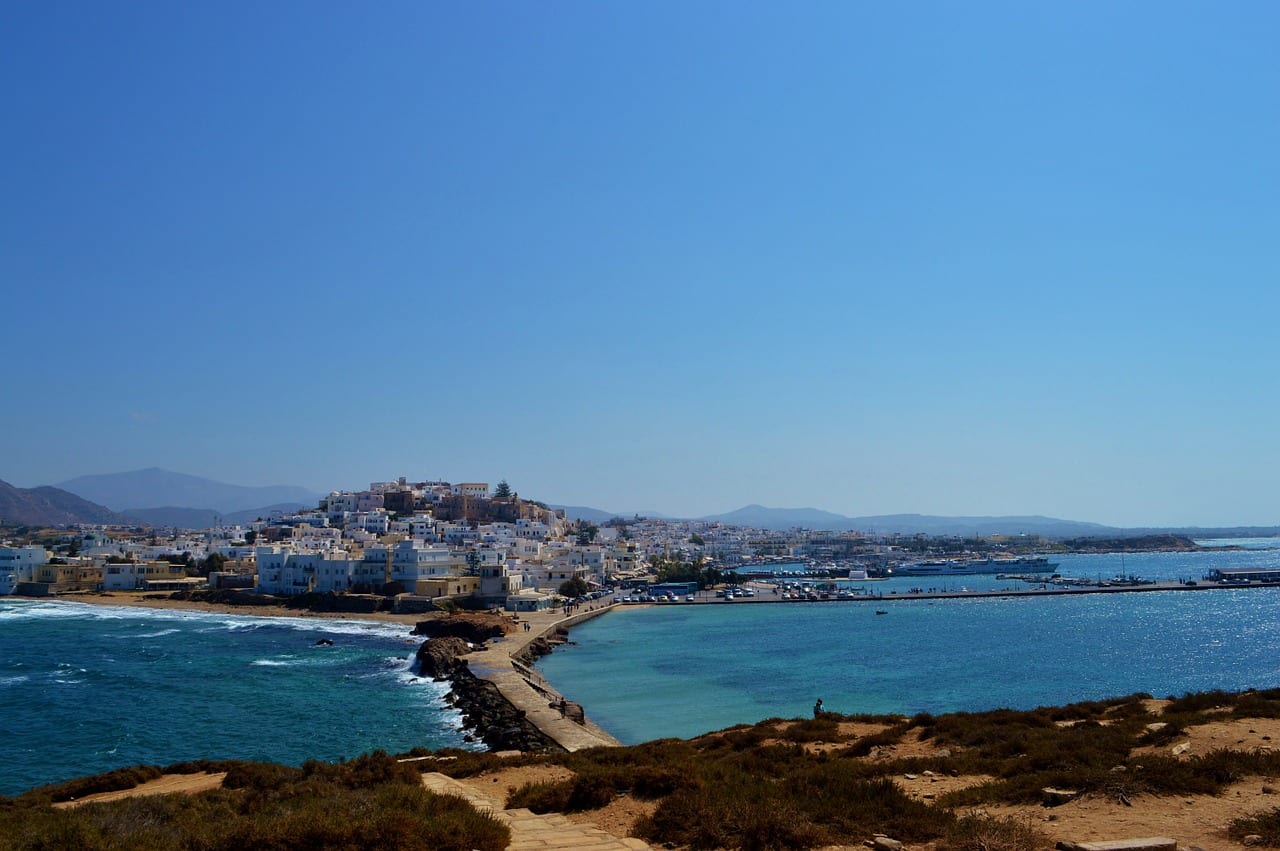 You might be surprised to see Naxos in the list of best Greek islands in October. However, Naxos has it all – history, mountain villages, pretty landscapes, and stunning beaches, so it’s really an ideal destination in Greece. it should be warm enough be able to spend some time on the beaches in Naxos, especially if you visit early in October.

Naxos has one of the most unique main towns in the Cyclades group of islands, with the white-washed town houses having merged with the Naxos Castle.

Allow a few hours to wander around, and allow enough time to get lost in the maze of tiny streets. Apart from Naxos town, make sure you visit some of the mountain villages, such as Apiranthos, Filoti, Koronos and Halki.

In terms of food, Naxos has several unique meat dishes and many distinct types of local cheese, such as graviera and arseniko. Make sure you taste the local kitro, a distilled alcoholic drink, and consider visiting one of the local distilleries, such as Distillery M. G. Vallindras in Halki village.

Special events in Naxos in October include the Naxathlon, a special triathlon event, and the celebration of the “Ohi” day, when you will see parades out on the streets. Take a look here for some of the best things to do in Naxos.

You can get to Naxos either by ferry from the Athens ports, or via flight from Athens or other European cities.

Which is the best Greek island in October?

Have you visited any of the Greek islands in October? Which was your favourite? Let us know in the comments! 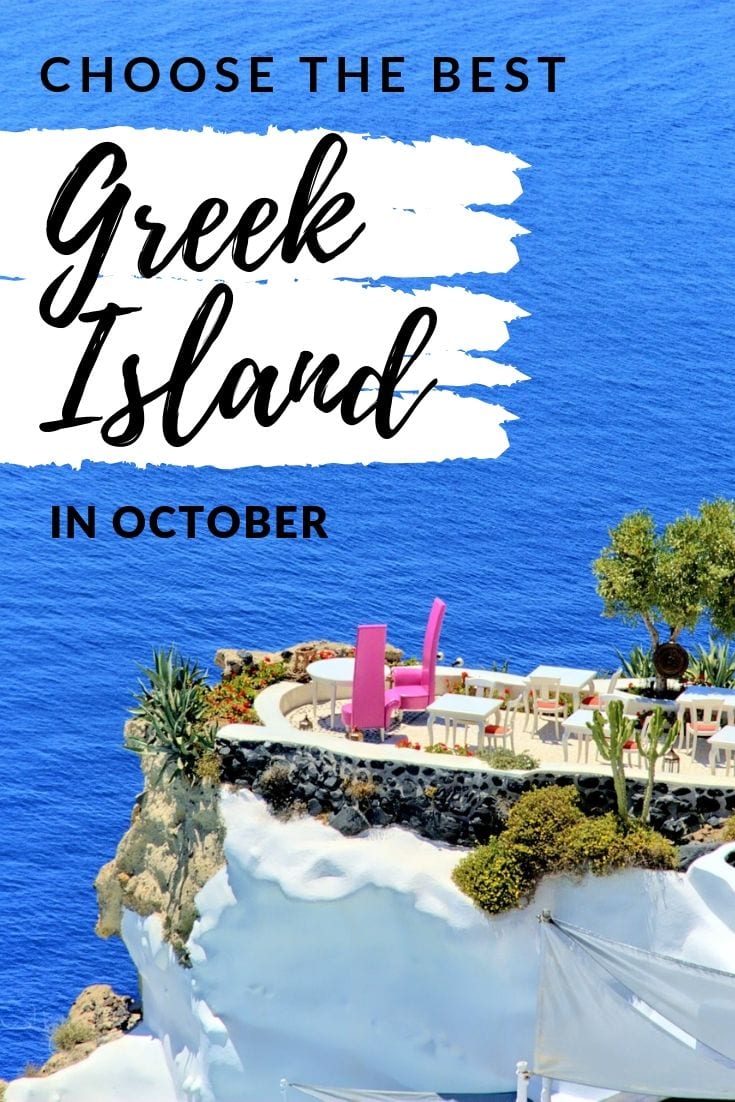